An Interview with Paige O’Hara, the voice of Belle,
on being part of “Beauty and the Beast” 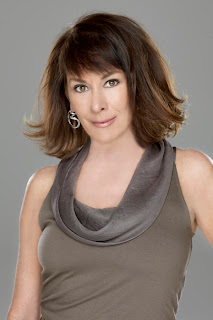 Did they incorporate any of your features when they drew Belle?
Oh yeah. The eyes and cheekbones and the way she raised her eyebrow and pushed her hair out of her face—that was me. Little things and expressions. When I looked at the wall, there were pictures of Elizabeth Taylor and Grace Kelly and Audrey Hepburn up, and my little funny picture was there too. The fact that she wasn’t so perfectly beautiful made the film that much more successful. She is a little odd. Of course that’s the character and I identified with her. I was odd as a kid. I was into Gershwin. I definitely identified with Belle. More girls than not feel that way I think.
How excited were you to be part of such a legendary Disney title?
You know, Mary Poppins is my favorite film and I loved Bambi and all the other Disney animated films. I was always an artist as well so I appreciated the animation too. Playing Belle was a dream come true.
The film won two Academy Awards. Tell me what it was like being there.
Oh it was incredible. It is the only animated film to ever be nominated for Best Picture so it holds that stature as well. I was really excited. We had heard rumors about the songs being nominated and there was a lot of discussion about celebrities performing our songs, but Mr. Eisner and Mr. Katzenberg insisted that the original artists get to sing their songs. That was really, really wonderful. It was the only time I sang with Angela Lansbury and Jerry Orbach. Angela introduced me at the Academy Awards. I remember we were backstage and of course I was going to be singing live which was scary so I was shaking. She was shaking too. She patted me on the butt and said if, “I had your voice, I wouldn’t be shaking. Don’t be nervous.”
What else do you remember about the experience?
It was fun being a part of the parties. Honestly, the worst part about the Oscars was that I didn’t like my dress—the one I performed in. They told the designer to put me in blue and it was this blue and white dress that looked more like Bo Peep or Dorothy. It was way too frilly and not very “Belle-y.” It was a checkerboard pattern. I had to perform in that dress, but afterwards I got to change into a beautiful Bob Mackie teal green gown. I even made one magazine’s Top 3 Best Dressed list!
You won a Grammy for a song from “Beauty and the Beast’s Children Singalong” too. What was that like?
It was incredible. Of course it won Best Children’s Album, which is the Grammy I have on my wall. The whole ride has been phenomenal. I am still recording as Belle all the time…CD ROMs and toys. I was just in the studio recording Belle the other day. 99% of the time I record in a studio here in Vegas. They patch me in over the phone.
You are now painting original pieces of art for Disney based on some of your favorite moments from the film. Can you tell me about that?
I’ve always painted, since I was a little girl. I was drawn to Turner and Sargant and da Vinci. When they asked me about it, I thought why not? It would be kind of fun to show my version of Belle and stay as true as possible to the animators. I wanted to create moments to take them to a different level. Over the last year and a half, I’ll paint something and send it in and get comments and then make the changes and fix it and send it back. Three of the 8 were approved outright without changing anything.
What form of painting do you do?
Water mixed with oils. It is an oil texture but water-based and there’s only one company that puts the paints out. It takes a lot longer to dry than acrylics but it feels like oil paint without the smell. Most of the other Disney artists do watercolor or acrylics.
Have you painted your favorite scene, the one in the snow?
Ironically I have painted that scene 15 times and I haven’t submitted it because it’s just not good enough. That’s one I am still going to work on. I’d love to do the Beast with the little bird.
You’ve played Fantine in “Les Miserables”, Nellie Forbush in “South Pacific” and Ellie May Chipley in “Showboat” on Broadway—all of whom are beloved characters. How does voicing Belle compare?
Well it’s totally different, performing on stage, versus doing Belle on film. You use totally different chops as they say. I love the live audience, but I don’t know, I have a softness for Belle because she is the closest to me as I was as a young girl.
BEAUTY AND THE BEAST: Diamond Edition Bluay + DVD Combo Pack is Available October 5th!