All opinions expressed in this post about Grand Rapids are my own and not influenced in any way by the company.  Any product claim, statistic, quote or other representation about a product or service should be verified with the manufacturer or provider. Please refer to this site’s Disclaimer for more information. I have been compensated or given a product free of charge, but that does not impact my views or opinions.

Being from Michigan I can say that I love my State and for the most of my life have lived within its’ borders. Growing up on the east side of the State I never really spent much time on the West side of the State, but since I have gotten older I have definitely spent more time exploring all of the State. This past weekend my wife and I celebrated our 15th anniversary by exploring my State’s second largest city, Grand Rapids thanks to the great people at Experience Grand Rapids.   I currently live about an hour and a half from Grand Rapids and the drive is an easy one. In exploring the Experience Grand Rapids site before coming to the city I have to say that I was very impressed with the wide array of things to do in this city. Not only are there more restaurants than you can know what to do with, but the city is strewn with museums, artwork and more.

We stayed at the Amway Grand Plaza Hotel, an extravagant hotel in downtown, and we were placed on the Pantalind side of the hotel. This is the older side of the hotel which used to be the old Pantalind Hotel which opened originally in the early 1900’s. There is also a much more modern glass tower side of the hotel which is on the river too, but we loved our room with its’ old style charm. The hotel has a ton of restaurants within it including Cygnus (at the top of the glass tower – talk about great views), Ruth Chris Steak House, Benthams Restaurant and more! We loved how centrally located this hotel was to all of downtown! The first night we were in town we decided to go to dinner at an amazing restaurant called San Chez, which is a Tapas Bistro in downtown Grand Rapids. We ended up meeting some friends from the area there for food that was out of this world and Sangria that was to die for. The great thing about this restaurant is that there is so much on the menu that you can choose from and then share with one another. The restaurant not only provides you with flavor that will bring you back for more but also encourages you to share so much more than food and simply talk and have a great time.

After dinner we went to a building called The B.O.B (Big Old Building) which has a ton of restaurants/Bars within it, but also has a comedy club called Dr. Grins Comedy Club. I have not been to a comedy club for a long time, but this looked like fun and the headliner Lachlan Patterson sounded good as well! I have to say that for the three acts that we saw, two of the three were great and Lachlan was definitely worth the wait! We had a great time and I would definitely come back again for not only the great comedy, but also the great wait staff as well.

On Saturday morning I ventured out into the town looking for breakfast. I decided to job around the town and see what I could see, as well as find what was open. I was surprised to see how alive the downtown area was and then found that there was a bike race in town that morning. I felt completely safe in the downtown area and ran across a number of restaurants that were open at the time. I also found some great artwork around the city as well, both installed on property and painted on the side of buildings. This made a lot of sense, especially knowing that this city is the home of ArtPrize, a art competition that I would love to come back to see in the future! I ended up just stopping to get something small from Biggby Coffee so that we could get started for the day. 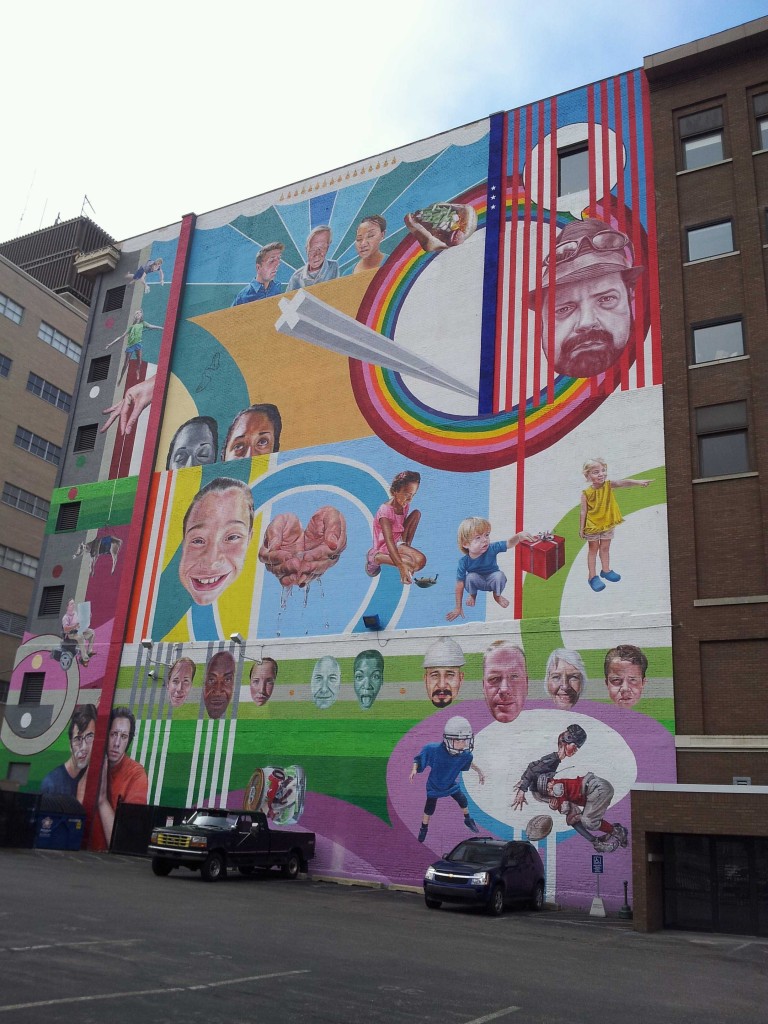 Our first stop of the day was the Gerald Ford Presidential Museum. This President grew up in Grand Rapids and the Museum was right across the river from where we stayed. This museum was so interesting! This was the President that my wife and I were born into and I have to say that we both learned so much about the short Presidency of this man and what he did to heal a nation after the scandal of the Nixon Presidency. We spent quite a bit of time in this museum and even visited both his and Betty Ford’s grave.

From there we went to the Grand Rapids Art Museum (GRAM). Again, this museum was only a block away from the hotel and I had heard great things about it. What I loved about the museum was that it had a bit of everything all in one place. My favorite floor was probably the third as it held artwork from Picasso to more Michigan-based artists and art that ranged in age from the 1500’s to present. They even had a few pieces that were recognized from previous ArtPrize competitions including the one below that just blew my mind. You may not be able to tell, but this is not a photograph, but instead was a pencil drawing – it was simply stunning!

Saturday night we went to Hopcat, one of the restaurant/micro breweries in town. I recently learned about the fact that Grand Rapids was recently named one of the top Beer Cities in the United States (who would have known). In the down Grand Rapids area, Hopcat along with a number of other micro breweries have started up and are providing customers with amazing blends of beer. At Hopcat, they had 64 beers on tap – yes I said 64, talk about crazy! The food at Hopcat was great – you have to try the Crack Fries and the atmosphere was loud and fun! 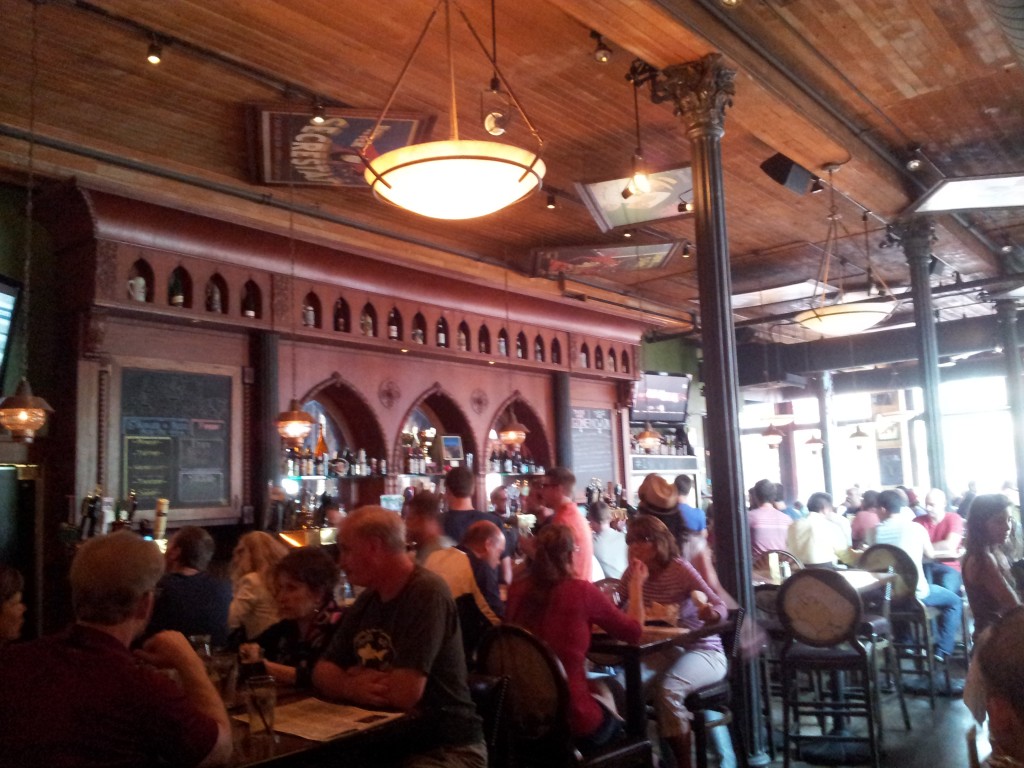 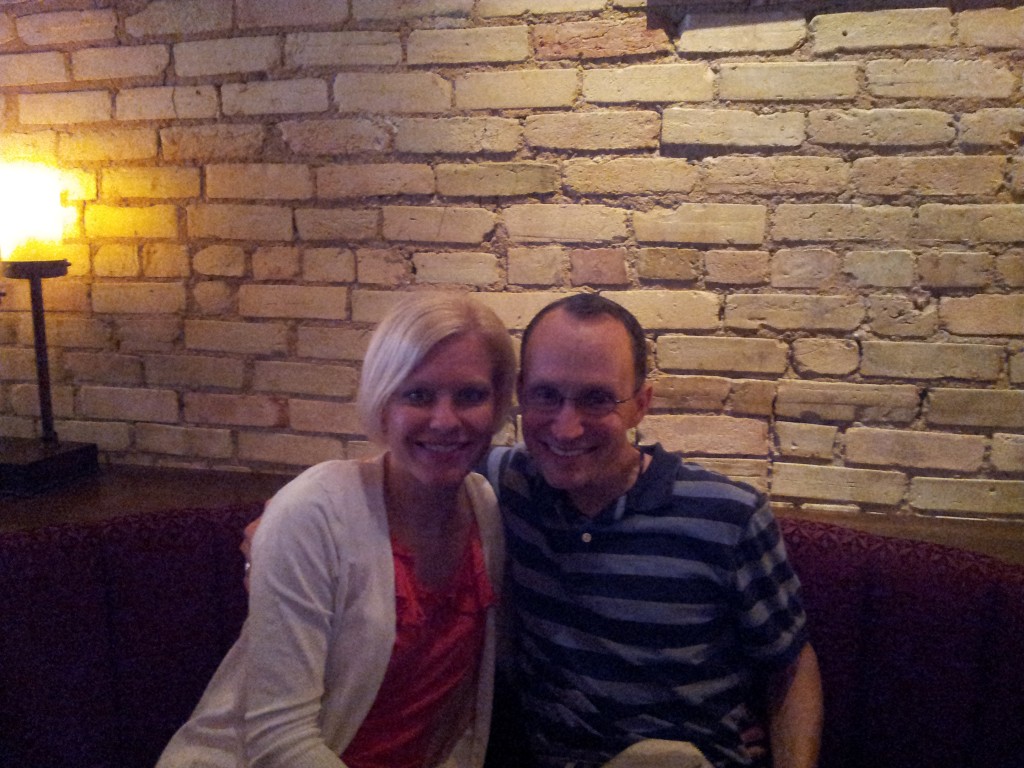 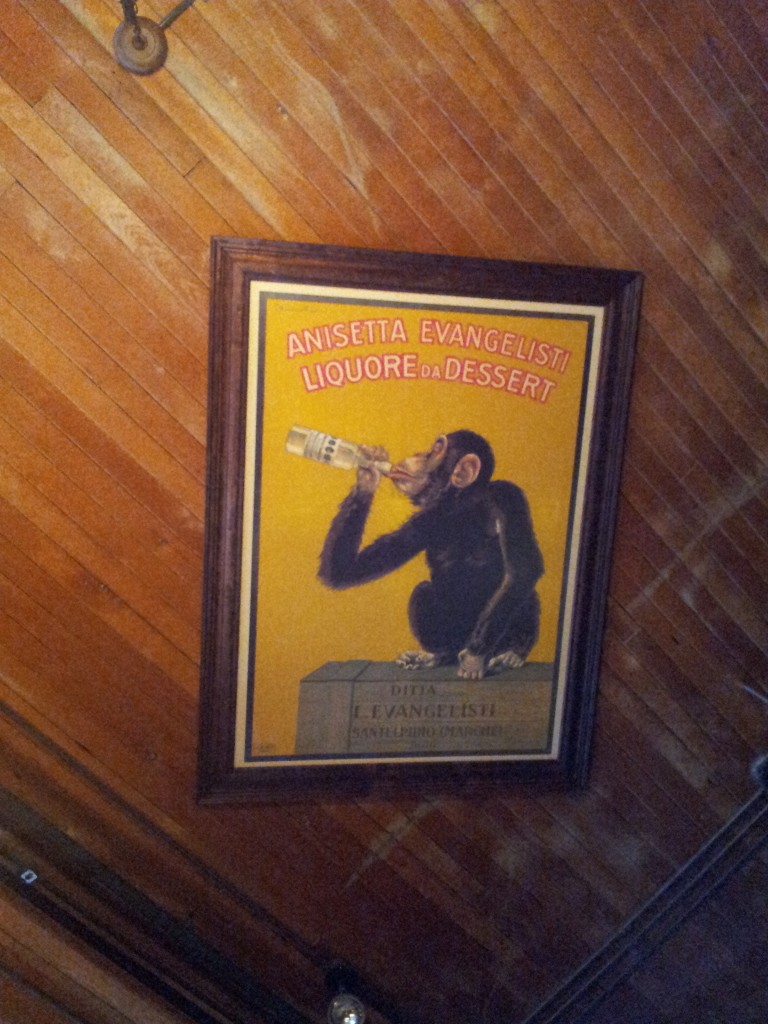 Sunday was our short day as we had to check out by 11 and had to pick up our girls as well. We had found a pizza place named Georgios Gourmet Pizza on Friday and decided to come back for brunch seeing that it had a remarkable number of different pizzas (including a Mac ‘n Cheese pizze, a Salad Pizza, Taco Pizza and more). The pizza was definitely worth the wait as it was one of the best tasting pizzas that I have tried in the past. On top of this the crust was just right which not every pizza place can claim. What was even better though was that we found out that there are two other franchise restaurants near where we live outside of Lansing, so guess where we will be going in the near future. 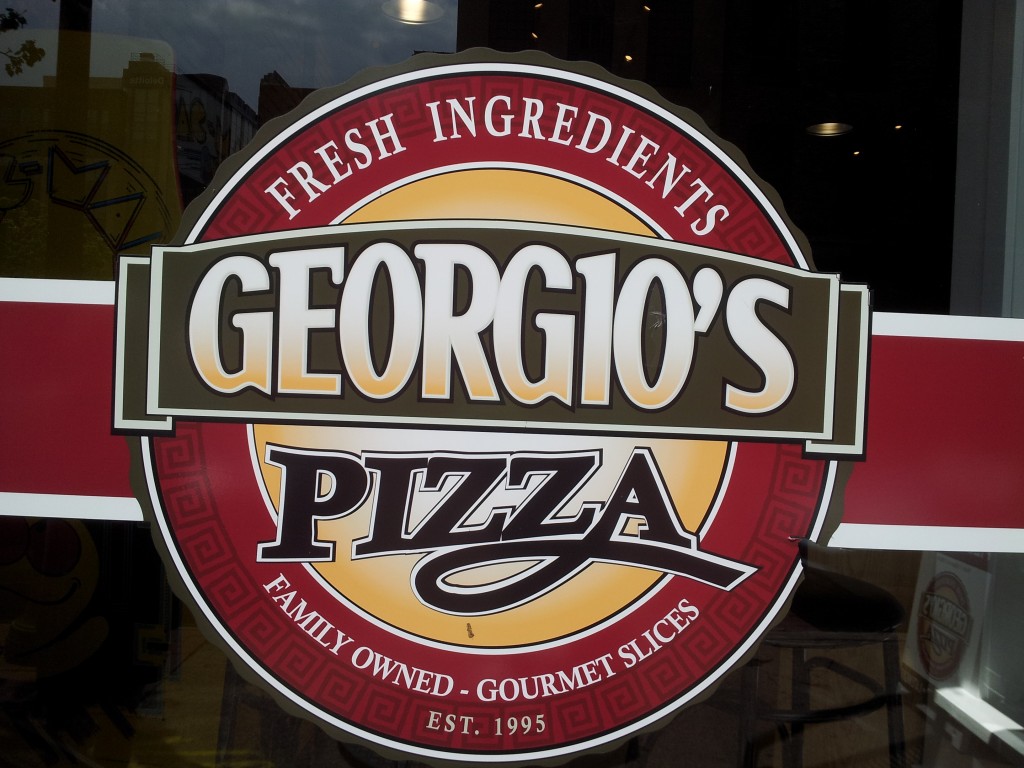 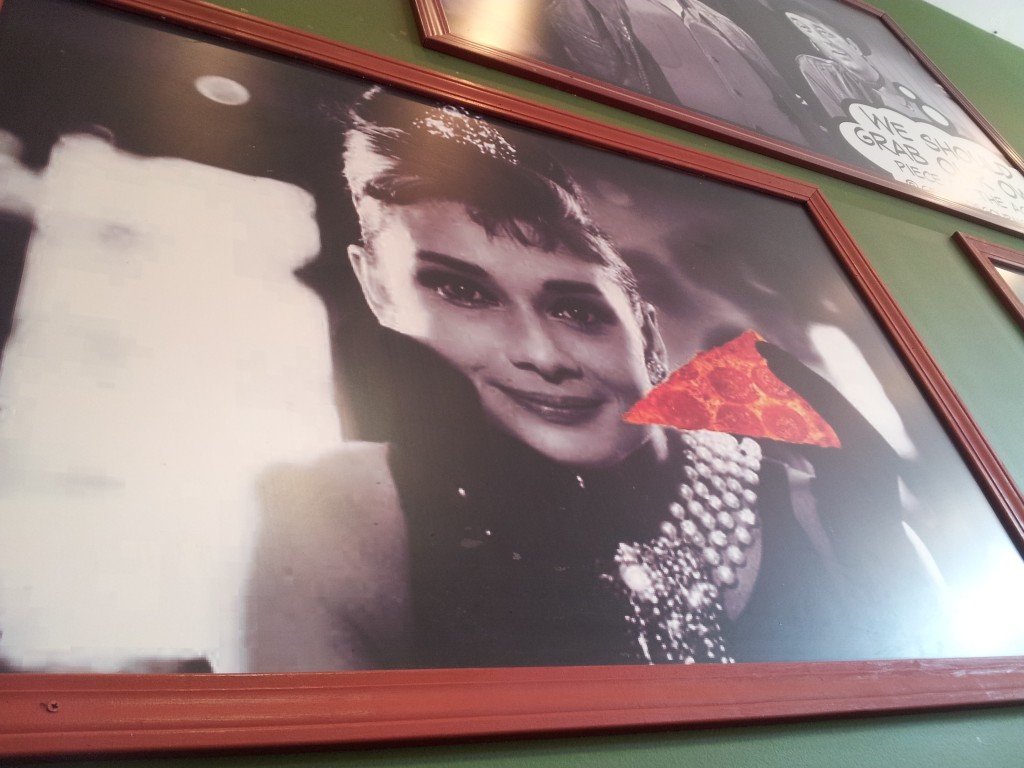 We just scratched the surface of this city on this trip, but rest assured we will be back. This is an amazing city with so much to offer everyone (not just adults). If you are looking for a great city that has things for all ages, food to make your mouth water, art that will dazzle and natural beauty that is awe-inspiring, Grand Rapids is the place to visit!