DoSomething.org, one of the largest global organizations for young people and social change, and global entertainment company WWE and its Be a STAR anti-bullying initiative, are teaming up for The Bully Text: Superstar Edition. The campaign, now in its second year, gets young people to take action around bullying by playing an SMS text message game.

From today until Monday, August 31, young people can virtually work their way through six levels of scenarios with guidance from WWE Superstars and Divas, including Roman Reigns®, Dean Ambrose®, Paige®, Natalya® and Alicia Fox®. Then, each player is given options to stand up and speak out against bullying. For example, “You sit behind Roman. Someone in the back of the bus keeps throwing paper airplanes at him. Do you A) Play it cool- it’s not your fight or B) play Superman?” Along the way, players will see how their anti-bullying skills compare to others, and ultimately whether they’ve earned the WWE World Heavyweight Championship title in bullying prevention. Every player will also receive the chance to win a Be a STAR rally at his or her school or community center.

” WWE ‘s massive reach and stellar talent have helped us activate thousands of young people around anti-bullying,” said Naomi Hirabayashi, chief marketing officer at DoSomething.org. “We’re excited to rally WWE fans around this issue for year two to make it bigger and better than ever!”

“We are proud to once again partner with DoSomething.org and provide thousands with resources to help put an end to bullying in their communities,” said Stephanie McMahon, WWE Chief Brand Officer. “Utilizing our global assets and larger than life WWE Superstars and Divas, we are confident that this campaign will help educate young people on the dangers of bullying and encourage them to stand up for themselves and others.”

DoSomething.org makes the world suck less. One of the largest global orgs for young people and social change, our 4 million members tackle campaigns that impact every cause, from poverty to violence to the environment to literally everything else. Any cause, anytime, anywhere. *mic drop*

About Be a STAR:

Founded by WWE and developed in partnership with The Creative Coalition, the  Be a STAR anti-bullying initiative stands for Show Tolerance And Respect and its mission is to ensure a positive and equitable social environment for everyone regardless of age, race, religion or sexual orientation through grassroots efforts beginning with education and awareness. Be a STAR promotes positive methods of social interaction and encourages people to treat others as equals. 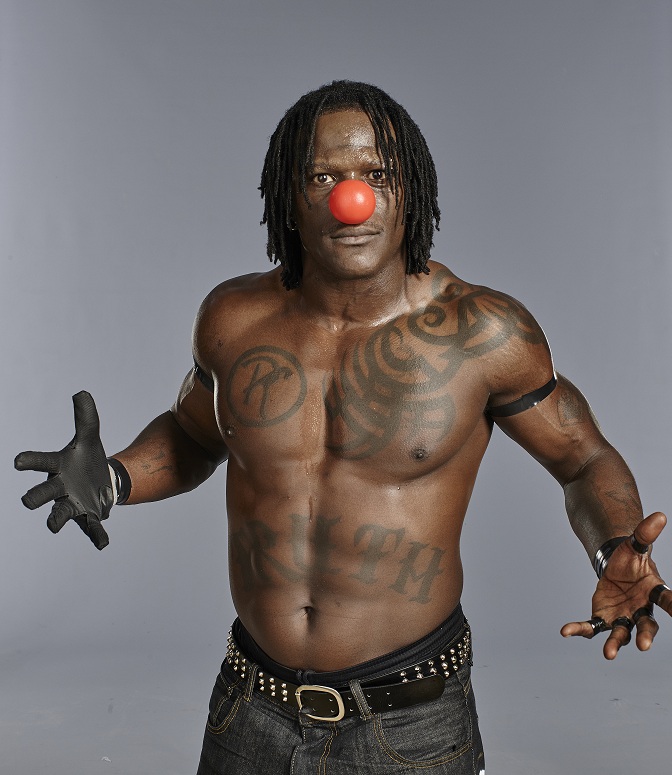 WWE Superstars and Divas get into the spirit of Red Nose Day, NBC’s new campaign dedicated to raising money for children and young people living in poverty, by simply having fun and making people laugh.  Check out their photos and more information about the organization and how you can help: http://www.nbc.com/red-nose-day 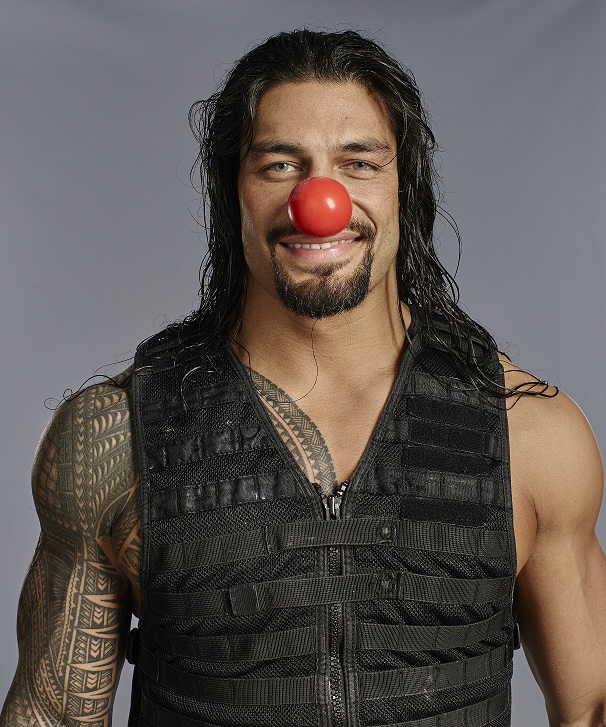 WWE Slam City, filmed in the next generation of stop-motion animation, features a new WWE animated character, The Finisher, who fires all of the WWE Superstars and sends them to WWE Slam City to find day jobs. With John Cena as an auto mechanic, Randy Orton as a zookeeper and Sheamus as a theater usher, these Superstars stay true to their WWE personas as they face life outside of the ring with new career challenges.

“True to the spirit of the NickSports programming block, WWE Slam City offers kids and their families a fun, fresh way to experience these exciting WWE Superstars, and the series is a great complement to our diverse, and ever expanding, sports lineup,” said Keith Dawkins, Senior Vice President and General Manager, Nicktoons, TeenNick and Nick Jr.

WWE Slam City is a key component of WWE’s larger strategy to expand its reach to kids. In 2013, WWE’s national TV programming reached nearly 3 million kids each week, representing more than 20 percent of WWE’s average weekly TV audience.  WWE also reaches kids through the number 2 action figure property in the U.S., WWE Studios productions of The Flintstones, Scooby-Doo WrestleMania Mystery and Christmas Bounty as well as partnerships with Mattel, Kraft Foods, Frito-Lay, Post Foods and MilkPEP. In addition, WWE supports programs that positively impact children and families around the world, including a 30-plus year relationship with Make-A-Wish as well as various literacy, education, anti-bullying and military initiatives.

Since its launch earlier this year, WWE Slam City has secured nearly 20 million views across a variety of platforms including WWEslamcity.com, Cartoonium, WWE Network, Hulu, Kabillion, Nintendo and AOL. 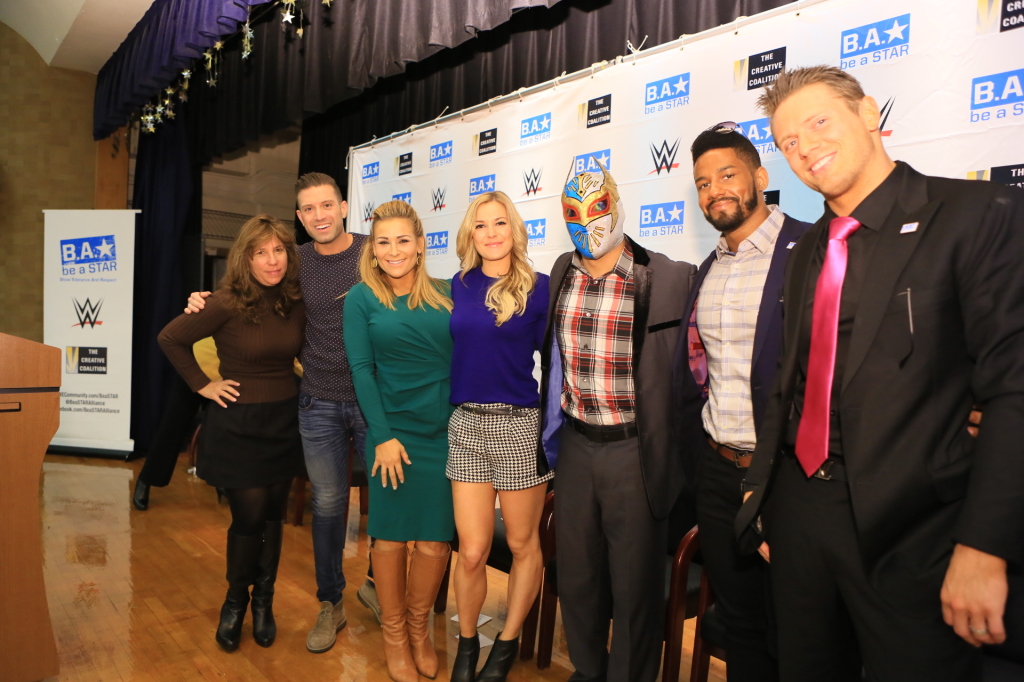 WWE® and The Creative Coalition will support GLAAD’s Spirit Day by “going purple” through their joint Be a STAR (Show Tolerance And Respect) anti-bullying initiative. Support kicked off this morning at a Be a STAR anti-bullying rally in New York and will continue through Spirit Day next Thursday, October 16 with promotion on TheCreativeCoalition.org, WWE.com, WWECommunity.com and on WWE and Be a STAR social media assets, reaching more than 400 million people globally.

As part of The Creative Coalition and WWE’s support for GLAAD, a Be a STAR Alliance Member, the Be a STAR logo wasturned purple, a first in the program’s history, and students at the rally were given co-branded t-shirts that encouraged them to “Go Purple” on Spirit Day, show their support for LGBT youth and speak out against bullying. WWE has supported GLAAD’s Spirit Day since 2011.

“No one should be bullied because of who they are,” said GLAAD President & CEO Sarah Kate Ellis. “GLAAD is proud to stand with WWE in the fight against bullying and in a visible display of support for LGBT youth.” 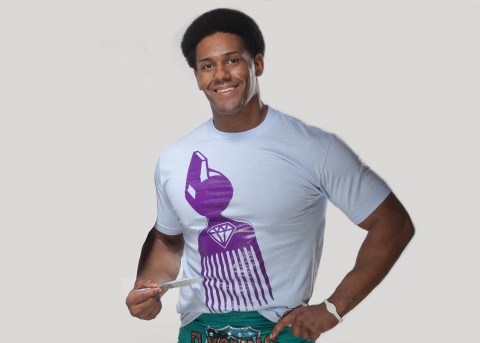 “Spirit Day is an important time for everyone to stand up against bullying and discrimination,” said Stephanie McMahon, WWE Chief Brand Officer. “WWE is proud to support the LGBT community and GLAAD by spreading the message of respect and inclusion through our global platforms.”

“The Creative Coalition is proud that GLAAD is a member of our Be a STAR Alliance and even more proud to support Spirit Day as an initiative that embodies the tenets of the Be a STAR program,” said CEO of The Creative Coalition Robin Bronk. “We commend GLAAD for Spirit Day and believe it enhances our commitment to utilizing the resources of the arts and entertainment community to increase acceptance of lesbian, gay, bisexual and transgender youth.” 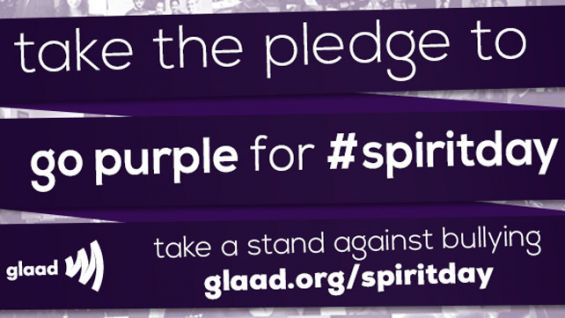 Additionally, WWE and Be a STAR will stand up against bullying and support GLAAD’s Spirit Day by promoting the initiative through homepage takeovers on WWE.com and WWECommunity.com as well as social media support from WWE Superstars and Divas.

Spirit Day was started in 2010 as a response to the young people who had taken their own lives. Millions wear purple on Spirit Day as a sign of support for lesbian, gay, bisexual and transgender (LGBT) youth and to speak out against bullying. With GLAAD’s help, Spirit Day has since garnered widespread support from entertainment organizations, sports leagues, celebrities, TV news and entertainment programs, corporations, schools, local communities, and even national landmarks.

WWE and Susan G. Komen will expand their partnership for their third annual breast cancer awareness campaign beginning this week on Monday Night Raw® with WWE Superstars and Divas wearing co-branded Susan G. Komen and WWE apparel and WWE platforms “going pink.” The “Courage Conquer Cure” campaign will continue throughout National Breast Cancer Awareness month, and WWE will donate to Komen 20 percent of the retail sales price of all co-branded merchandise sold on WWEShop.com and at WWE live events, as well as

5 percent of all other WWE merchandise sold on WWEShop.com. For the first time, fans will have the option of donating $1, $5 or $10 upon checkout from WWEShop.com with all proceeds benefiting Komen.

To support Komen’s mission, WWE will utilize all its assets including WWE Network, TV and pay-per-view broadcasts, live events, PSAs, digital and social media to generate awareness and encourage fans to get involved. The campaign will also be featured on the hit reality series Total Divas, in an episode that airs on Sunday, October 19 at 9 pm ET on E!. Throughout the month, the WWE announcer table, entrance ramp and ring skirts will be co-branded and the middle ring rope turned pink to promote the fight against breast cancer. In addition, a co-branded WWE and Susan G. Komen flag will be flown outside of WWE’s corporate headquarters.

“WWE has made a tremendous commitment to women and men facing breast cancer, not only in October during National Breast Cancer Awareness month but all year round,” said Komen President and CEO Judith A. Salerno, M.D., M.S. “WWE’s partnership has raised funds for Komen’s research and health programs, and helped us reach millions of people with potentially life-saving information about their risk for breast cancer. We’re deeply grateful to our friends at WWE and their fans worldwide for their commitment to our mission to end breast cancer forever.”

“Susan G. Komen has truly transformed the world’s support for breast cancer research and awareness,” said WWE Chief Brand Officer Stephanie McMahon. “WWE is exceptionally proud to continue our partnership with Komen and be at the forefront of this movement, as we continue to utilize our global platforms to raise awareness and funds for a disease that affects so many people.”

Susan G. Komen and WWE have a history of success in raising awareness and funds for the fight against breast cancer. The partnership launched in 2012 with the successful “Rise Above Cancer” campaign and has generated more than $1.2 million for Komen to date. The two organizations also partnered for “Make Mom Proud,” a campaign that coincided with Mother’s Day and called on supporters to do something meaningful for their moms and other important women in the their lives. This past May, Komen and WWE teamed up again for National Women’s Health Week with a campaign to remind women how a healthy lifestyle is critical in the fight against breast cancer. 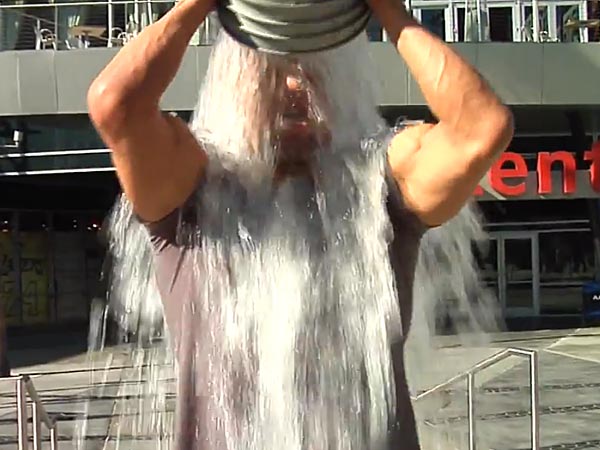 WWE COO Triple H accepts Pittsburgh Steelers quarterback Ben Roethlisberger’s “Ice Bucket Challenge.” Who will Triple H challenge to do the same in an effort to create awareness for ALS? 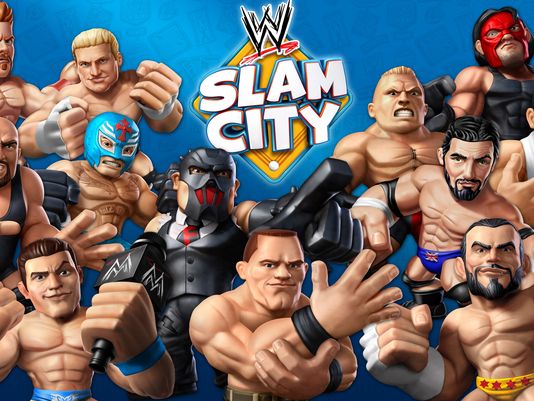 “Between a Rock and a Pizza”

Mark Henry and the Rock battle over the only pizza big enough for a superstar appetite! It’s a showdown sure to get your stomach growling:

The series, filmed in the next generation of stop-motion animation, features a new WWE animated character The Finisher, who fires all of the WWE Superstars and sends them to WWE Slam City to find day jobs.

In addition to WWESlamCity.com and Cartoonium on YouTube, WWE Slam City will also be available in the U.S. on WWE Network, Hulu, PlayStation®, Xbox, AOL On, Nintendo, Vudu, Google Play, Kabillion, Mattel.com and iTunes.

WWE Slam City is a key component of WWE’s larger strategy to expand its reach to kids. In 2013, WWE’s national TV programming reached nearly 3 million kids each week, representing more than 20 percent of WWE’s average weekly TV audience. WWE also reaches kids through the number 2 action figure property in the U.S. , WWE Studios productions of The Flintstones, Scooby-Doo WrestleMania Mystery and Christmas Bounty as well as partnerships with Kraft Foods, Frito-Lay, Post Foods and MilkPEP. In addition, WWE supports programs that positively impact children and families around the world, including a 30-plus year relationship with Make-A-Wish as well as various literacy, education, anti-bullying and military initiatives.

The 26-episode WWE Slam City series is co-produced by WWE and Mattel’s Playground Productions, a new division within the Mattel Global Brands whose mission is to identify, cultivate and produce compelling storylines through multiple platforms.