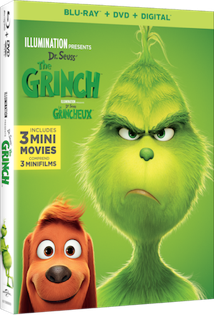 The new home entertainment edition contains more than 60 minutes of bonus content, including three mini-movies: “Dog Days of Winter” starring the Grinch and his heroically loyal dog Max; and “Yellow is the New Black” and “Santa’s Little Helpers,” both starring the lovable Minions. It also includes stunning featurettes, a how-to-draw tutorial and much more. Narrated by Grammy Award®winner and Oscar® nominee Pharrell Williams, Dr. Seuss’ The Grinch stars Academy Award® nominee Benedict Cumberbatch (Dr. Strange, “Sherlock”) as the infamous Grinch, who lives a solitary life inside a cave on Mt. Crumpit with only his loyal dog, Max, for company. The incredible voice cast includes Rashida Jones (“Parks and Recreation,” The Muppets) as Donna Who, Kenan Thompson (“Saturday Night Live”) as Bricklebaum, Cameron Seely (The Greatest Showman) as Cindy-Lou Who, and featuring legendary actress Angela Lansbury (Anastasia, Beauty and the Beast) as the mayor of Whoville. Funny, heartwarming and visually stunning, Dr. Seuss’ The Grinch is a perfect night in for the whole family!

My family has always loved the original Grinch movie so we were excited to see what this new movie would bring. We ended up seeing this movie in the theater and we found that while it was a different interpretation to the original we all thoroughly enjoyed the plot, voice acting and new animation that was brought to this movie.

This movie, unlike the original seems to show the Grinch as knowing at least some of the Whos, if not quite a few of them. He still does not have a good liking for them as a whole but there does seem to be more connection than in the previous version.

The new style of animation allows you to really see a new world and you seem to be able to really get drawn into the world from beginning to end.

We loved Benedict Cumberbatch as the Grinch. He did a great job as a whole and truly seemed to embody the character well in my opinion. There are many other unique characters that my kids loved meeting such as Max who is an adorable character as well.

We also liked the rendition of Cindy Lou who is trying to capture Santa Claus to help her mom.