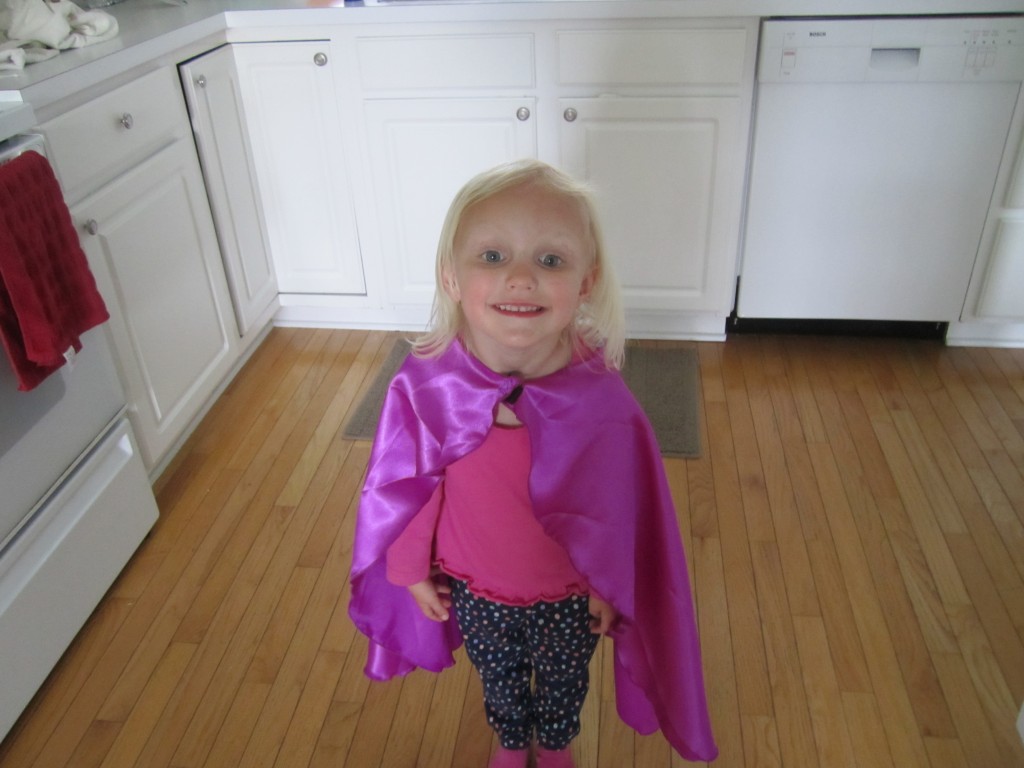 PowerCapes is a team of Moms, Dads, Customer Service Heroes, Web Ninjas and Passionate People who have dedicated their lives to helping kids be real super heroes. Started by Holly Bartman as a way to provide children with personalized super hero capes, PowerCapes has become the #1 destination for authentic super hero wear for kids (and adults, too!) 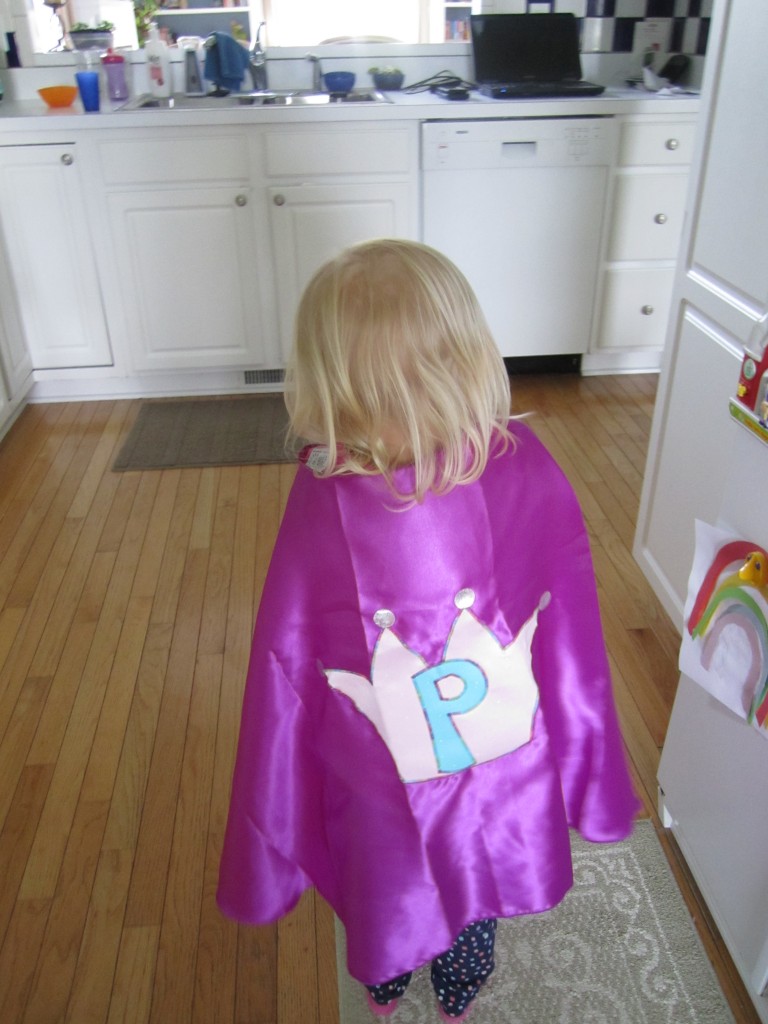 I was lucky enough to be able to try this company out and see what is was all about by getting a cape for Diva-PJ! For those of you who do not know PJ, she loves the color purple so finding a cape that was at least close to this and incorporating purple throughout was definitely going to be important. Going through the product catalog, I was amazed to find such a wide variety of items to choose from. From capes to super hero masks, this company has everything that you will need to transform into a superhero.

I designed my own superhero cape. What I loved about this process was that it was so simple to use and the system was quite intuitive. You were able to select the color you wanted for the cape and then you could add sewn on items to make the cape unique. On these sewn on items you could add a splash of color, a initial or even some sparkles, whatever would make the cape unique and special for the person receiving the cape.

I did call into the company to get a few things worked out and I was amazed to hear their customer service workers as they made the call fun by asking “How Can I Make your Day Super Today” or something like this, so they really got into the call and had fun with it, which was a breath of fresh air when it came to customer service. 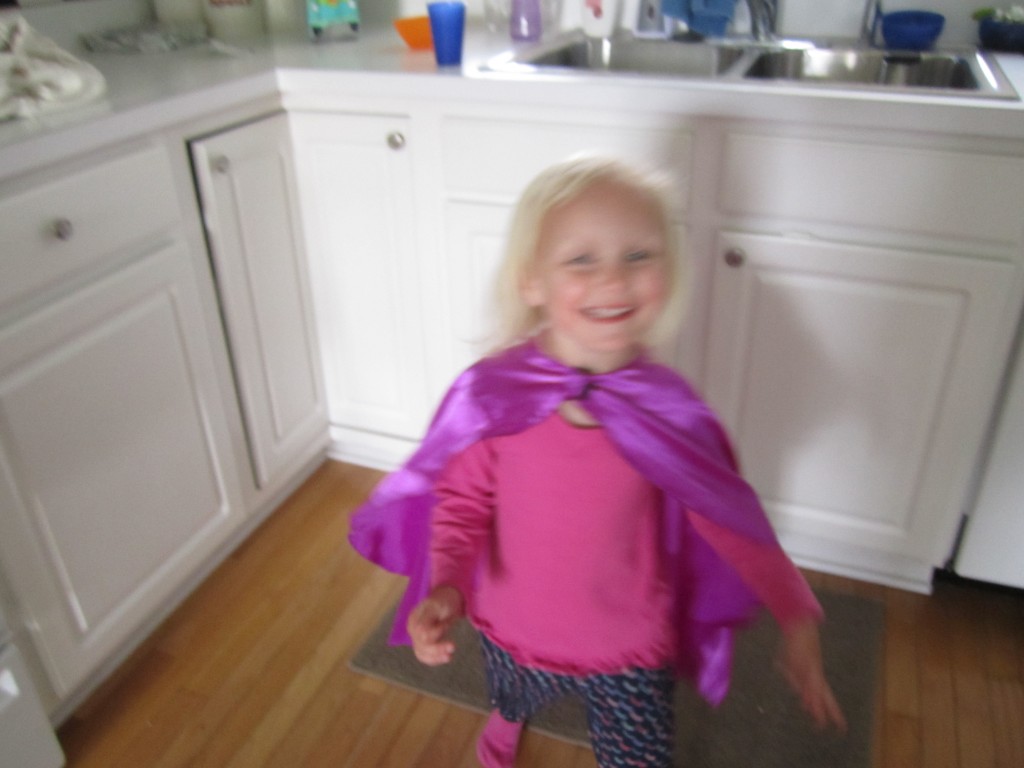 When we received the cape, it was of great quality and my daughter loved it. Now we cannot get her to take it off much of the time, so for us we have a new Superhero on our hands, Super PJ… So as you get ready for National Superhero Day on April 28, how about you? What type of cape would you design for yourself or someone that you love?

I highly encourage you all to check out PowerCapes for a unique gift that your whole family will love!

Marvel Studios presents “Marvel’s The Avengers”—the Super Hero team up of a lifetime, featuring iconic Marvel Super Heroes Iron Man, The Incredible Hulk, Thor, Captain America, Hawkeye and Black Widow. When an unexpected enemy emerges that threatens global safety and security, Nick Fury, Director of the international peacekeeping agency known as S.H.I.E.L.D., finds himself in need of a team to pull the world back from the brink of disaster. Spanning the globe, a daring recruitment effort begins.

Starring Robert Downey Jr., Chris Evans, Mark Ruffalo, Chris Hemsworth, Scarlett Johansson, Jeremy Renner and Samuel L. Jackson, and directed by Joss Whedon, “Marvel’s The Avengers” is based on the ever-popular Marvel comic book series “The Avengers,” first published in 1963 and a comics institution ever since. Prepare yourself for an exciting event movie, packed with action and spectacular special effects, when “Marvel’s The Avengers” assemble in summer 2012.

In “Marvel’s The Avengers,” superheroes team up to pull the world back from the brink of disaster when an unexpected enemy threatens global security.

About the Book
In The Physics of Superheroes: Spectacular Second Edition, Professor James Kakalios explains in a fun and accessible manner a broad range of physics, from Isaac Newton to the transistor — but there’s not an inclined plane or pulley in sight! Rather, all of the examples come from superhero comic books and in particular, those cases where the superheroes get their physics right! Inside you’ll discover the real science behind Krypton’s explosion, learn why Spider-Man’s webbing couldn’t save his girlfriend’s life, and see solid-state physics at work in Iron Man’s armor!

In this scintillating scientific survey of super powers you’ll learn what the physics of forces and motion can reveal about Superman’s strength and the true cause of the destruction of his home planet Krypton, what villains Magneto and Electro can teach us about the nature of electricity — and finally get the definitive answer about whether it was the Green Goblin or Spiderman’s webbing that killed the Wall Crawler’s girlfriend Gwen Stacy in that fateful plunge from George Washington Bridge!

Along the way, The Physics of Superheroes: Spectacular Second Edition explores everything from energy, to thermodynamics, to quantum mechanics, to solid state physics, and Kakalios relates the physics in comic books to such real-world applications as automobile airbags, microwave ovens, and transistors. You’ll also see how comic books have often been ahead of science in explaining recent topics in quantum mechanics (with Kitty Pryde of the X-Men) and string theory (with the Crisis on Infinite Earths).

This is the book you need to read if you ever wondered how the Invisible Woman of the Fantastic Four can see when she turns transparent, if the Atom could travel on an electron through a phone line, or if electromagnetic theory can explain how Professor X reads minds. Fun, provocative, and packed with more superheroes and superpowers than an Avergers-Justice Leugue crossover. The Physics of Superheroes: Spectacular Second Edition will delight comic-book fans and physicists alike.

About the Author
James Kakalios is a professor in the School of Physics and Astronomy at the University of Minnesota, where he has taught since 1988, and where his class “Everything I Needed to Know About Physics I learned from Reading Comic Books” is a popular freshman seminar.

In 2007, when the creators behind the “Watchmen” movie asked the National Academy of Sciences for a consultant to help them translate the acclaimed graphic novel to film, they looked no further than Kakalios and his superhero expertise. He also appears on the DVD version of the film in a featurette which discusses some of the science behind one of Watchmen’s central characters — Dr. Manhattan.

In 2009 The University News Service video “The Science of Watchmen,” in which Kakalios appears, won a regional Emmy Award in the “Advanced Media: Arts/Entertainment” category.

He received his Ph.D. in 1985 from the University of Chicago, and has been reading comic books for much longer. He lives in Minneapolis with his wife Therese and his three children.

My Take on the Book
While I have never been a huge Physics person, this book takes Physics to a whole new level and makes me truly interested in reading more about the subject. I never actually ever took Physics in high school or college. It just was not a requirement. I took many other science classes, just not Physics, so I never really got to know much about the concepts (beyond what my friends told me).

However, I did spend a lot of time growing up reading comic books. I collected many as a young child and always wished that I had the powers of spiderman or was able to be a member of the fantastic four (if only I had that mutant M show up on my hand).

This book takes the author’s love for comics and his love for Physics and combines them into one. I particularly enjoyed the fact that the author takes specific superheroes and explains how these powers worked physics terms. Thus, he looks at things such as the density of the planet Krypton (Superman’s home world) to the strength of Spider-man’s webbing.

After reading this book, I came to find that the author does in fact teach a course at the University of Minnesota that is called, everything I know about Physics I learned from Comic Books (now this is a course I would have taken).

This book was a joy to read, and yes, I even learned some physics while reading it! If you are interested in comics, you will love this book, check it out today!

If this book sounds like something you would like in your own library you can find it on Amazon!

Giveaway
How would you like to win this book for yourself? All you need to do 1) Subscribe to the Dad of Divas Reviews Site  and 2) Leave a note on Dad of Divas on Facebook about your favorite superheroes and why they are your favorite. (Leave username in comment below)  I will be giving away two books to lucky readers! The contest will run for one week and will end on September 23, 2010.
Bonus Entries
Grab my badge to your sidebar

<a href=”http://dadofdivas.blogspot.com/”><img src=”http://i281.photobucket.com/albums/kk235/lewisca3/DadofDivasButton1.jpg” /></a>
Make sure you comment separately for each task after the required entry task so you will get credit for each one ~ and leave your e-mail where you can be contacted.
This contest will run until September 23, 2010 at approximately 11:59 pm Eastern.
Winner must be a resident of the U.S or Canada.
Winners are chosen at random, if you want all your chances counted, make sure you leave individual comments, not all of them in one!
Winner has 48 hours to contact me or another name will be chosen.