In search for the hottest Easter themed gifts for holiday round-ups or posts? Skylanders Trap Team has hopped into the Easter spirit with three limited edition toys: Eggsellent Weeruptor, Power Punch Jet-Vac and a special Bunny Earth Trap! Weeruptor and Jet-Vac are Minis characters made especially for Spring holiday and feature pastel colors and an egg-shaped package design. Full descriptions of these are included below! 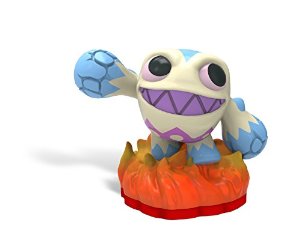 Eggsellent Weeruptor: Weeruptor was chosen as this year’s official mascot for the Annual Dragon Egg Hunt!  Being new to this time honored tradition, he disguised himself as a candy-coated egg and proceeded to capture Spyro, Cynder, and Drobot within a Traptanium basket… sort of missing the point of the occasion.  But what he lacks in point-getting, he more than makes up for in “Eggsellence!” 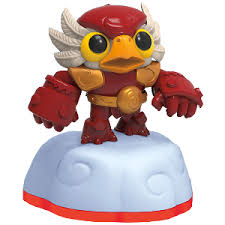 Power Punch Jet – Vac: Jet-Vac was the greatest, most daring flying ace in all of Windham.  He was given his magical wings when he was young, as was the tradition for all Air Barons.  But when his homeland was raided, he chose to sacrifice his wings to a young mother so she could fly her children to safety.  This act of nobility caught the attention of Master Eon, who sought out the young Air Baron and presented him with a gift – a powerful vacuum device that would allow him to soar through the skies once again. Jet-Vac accepted the gift with gratitude, and now daringly fights evil alongside the other Skylanders. 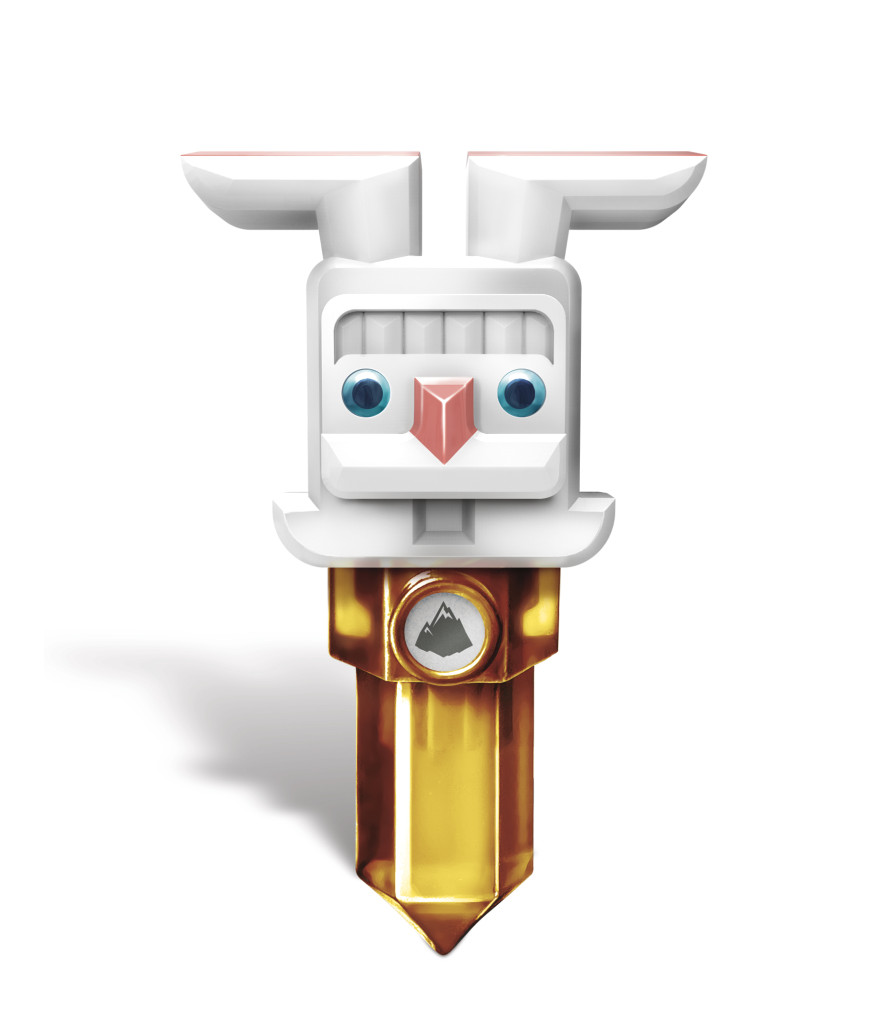 “The Skylanders® franchise was built on a foundation of creativity and innovation,” said Eric Hirshberg, CEO of Activision Publishing. “And with Skylanders Trap Team, we’re taking that tradition of innovation to new heights. For the last three years we’ve allowed kids to bring their toys to life in a video game, and this year, we’re letting them reach into the game, and pull characters out into the physical world by letting players trap and play as the villains. Skylanders Trap Team is also the first console game to simultaneously bring the entire AAA experience to tablet devices. Overall, we think Skylanders Trap Team represents our most magical innovation yet. But most importantly, it’s just a great game.”

The latest installment of the franchise that pioneered the Toys-to-Life genre is already poised to become one of the top family games this holiday season. Toys“R”Us® recently named Skylanders Trap Team as one of the “Fabulous 15” on the company’s 2014 Holiday Hot Toy List, while Target named Skylanders Trap Team to their Top Toys for the Holidays List.  In addition, the game was featured in Toy Insider’s Hot 20 Holiday Toys of 2014, which highlights the most sought-after and anticipated items of the holiday season. 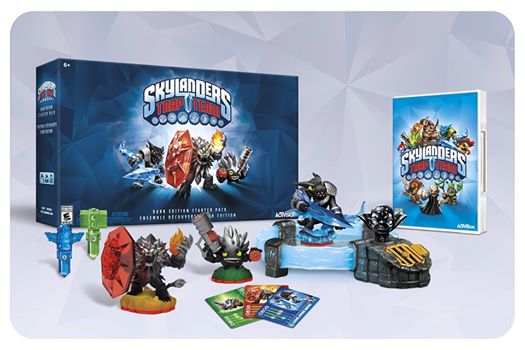 Skylanders continues to lead and evolve the category with Skylanders Trap Team by letting fans seek out and defeat the most wanted villains in all of Skylands, pull them out of the game and into living rooms by capturing them in magical Traps. Once they’ve defeated the villains, players will be able to place a Trap into the newTraptanium PortalTM to capture them. Players can then send villains back into the game where they can play as them to fight for good, reversing the magic. They will also be able to hear the villains inside the Traps, an innovation that truly brings life to toys.

“Since it launched four years ago, the Skylanders brand has continued to captivate young fans around the world who eagerly crowd our stores every time a new collectible character is introduced,” said Richard Barry, Executive Vice President, Chief Merchandising Officer, Toys“R”Us, Inc. “In preparation for the debut ofSkylanders Trap Team, which truly reinvents the franchise’s signature gameplay, our teams across the globe have worked year-long to ensure Toys“R”Us is THE destination for Portal Masters ready to experience all the fun the new game – and our exclusive Legendary Skylanders toys – have to offer.”

Portal Masters everywhere can get into the Skylanders Trap Team spirit by taking advantage of exclusiveSkylanders products at retailers nationwide: 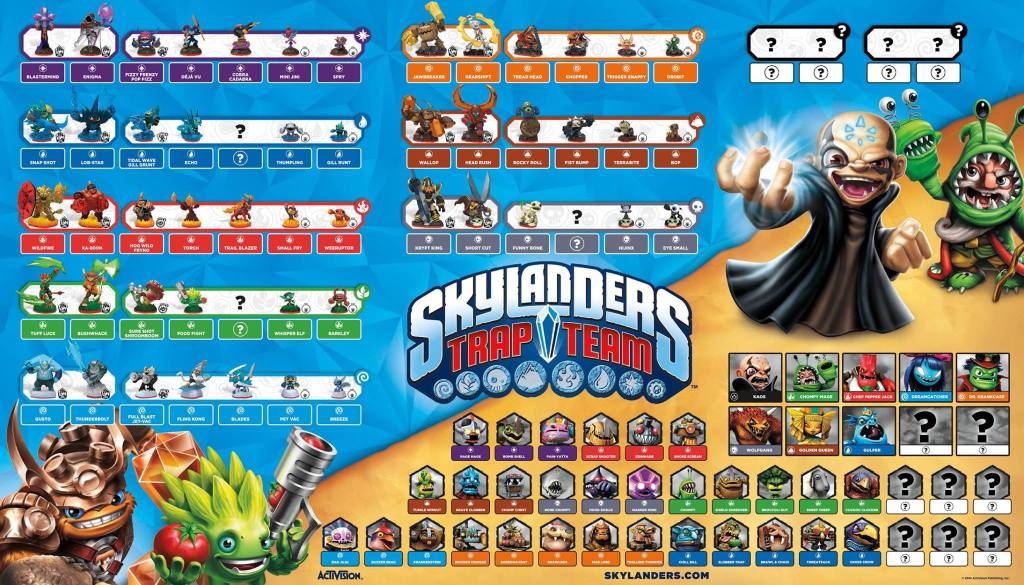 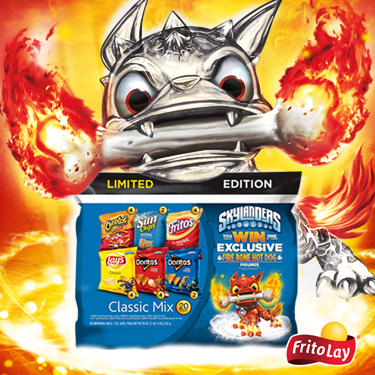 Sponsored by Frito-Lay, all opinions are my own

In February, fans were asked to select one of three potential heroes they wanted to see come to life in the next Skylanders® video game. Once their Skylanders® selection was made, contestants then submitted a suggested name and a 200-character or less inspiration for the name they chose. A qualified panel of judges, including executives from Frito-Lay and Activision, selected the three finalists from nearly 20,000 fan submissions. 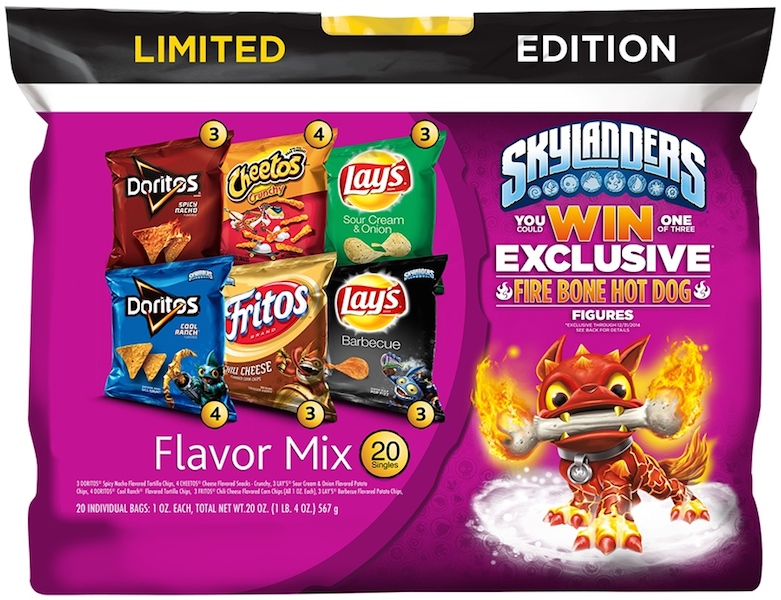 In June, fans 13 and older were asked to vote for their favorite character to select the winning hero to be featured in the upcoming Skylanders® Trap Team™ game, slated for release in North America on October 5,2014. The finalist receiving the most eligible fan votes who submitted the selected hero name will be awarded a $100,000 scholarship. Voting closed on June 13, 2014 and the winner will be revealed later this year. You can pre-order Skylanders® Trap Team™ by visiting www.skylanders.com/trapteam 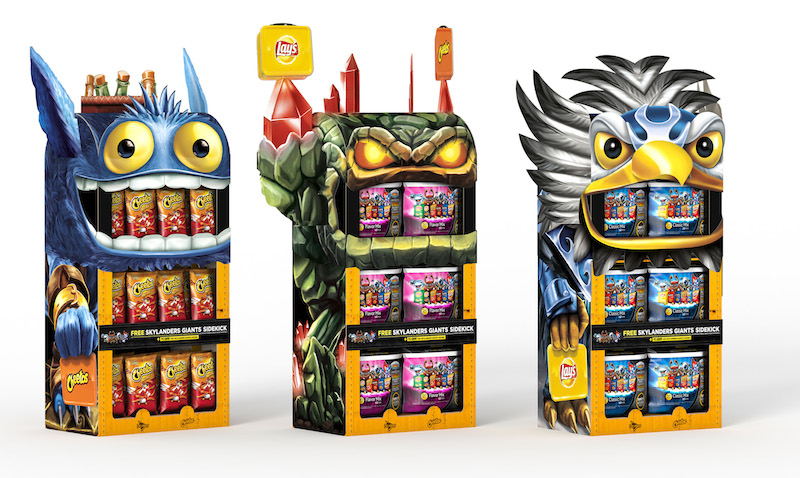 Starting June 30th, Frito-Lay has been giving fans the opportunity to bring Skylanders® characters to life with an amazing augmented reality experience through the free mobile app Blippar. The Blippar experience offers families the chance to win exclusive Skylanders® prizes, plus fans will score access to Skylanders® content that’s fun for the whole family! The joint promotion provides fans with the unique opportunity to win an exclusive, limited-edition translucent version of the Skylanders® character Fire Bone Hot Dog.

Frito-Lay is also giving away a Skylanders® Game Truck Party that will roll out to the house of one lucky fan!  You can enter for the chance to win this prize through the Blippar app until August 15!

You can get in on the fun with the Blippar App too: 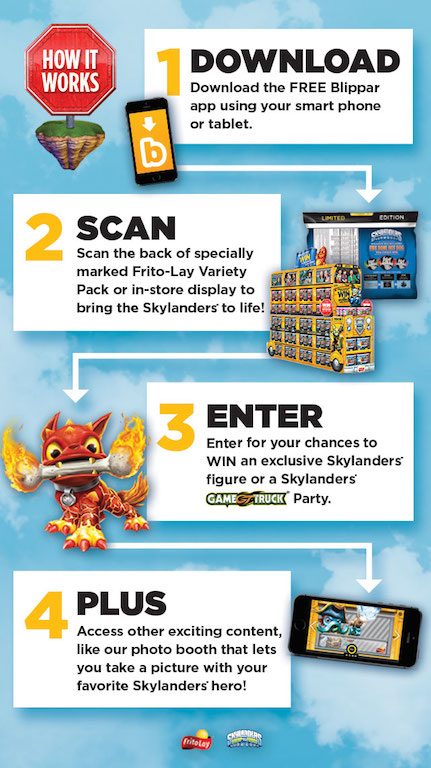 How would you like the chance to win a Frito-Lay and Skylanders gift basket? All you need to do is fill out the below form to be entered.  The giveaway will run for one week and will end on August 7, 2014.