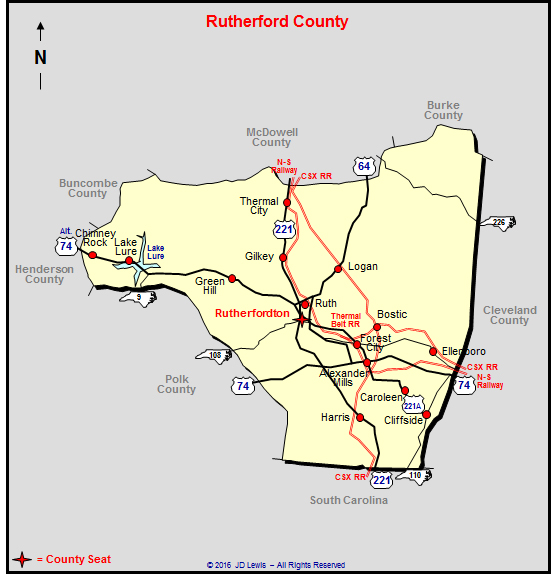 As a part of our family vacation we decided to travel about 30 minutes to the east to visit a few places in Rutherford County to explore Chimney Rock and Lake Lure as a part of our trip. 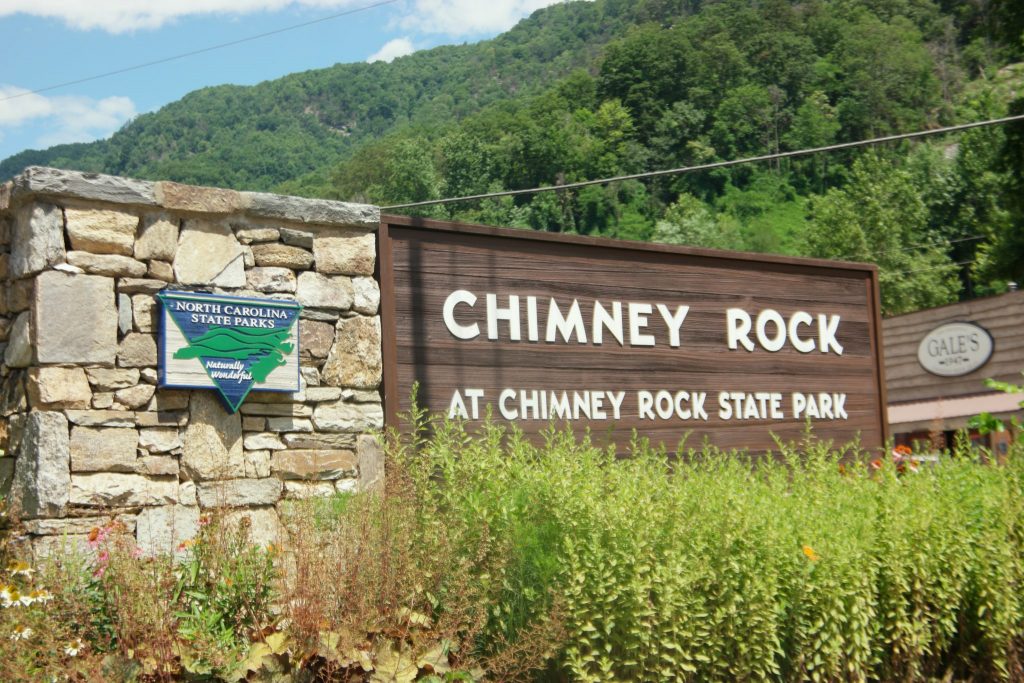 Getting up early we decided to head out to Chimney Rock to try and hit the park at the point that it opened (or at least close to it). We wanted to do this because we knew that it would only get warmer as the day went on. It took us about 30 minutes to get to the Chimney Rock State Park . One of the things that I loved was that we had to drive through the small town of Bat Cave which just sounded like an amazing town. 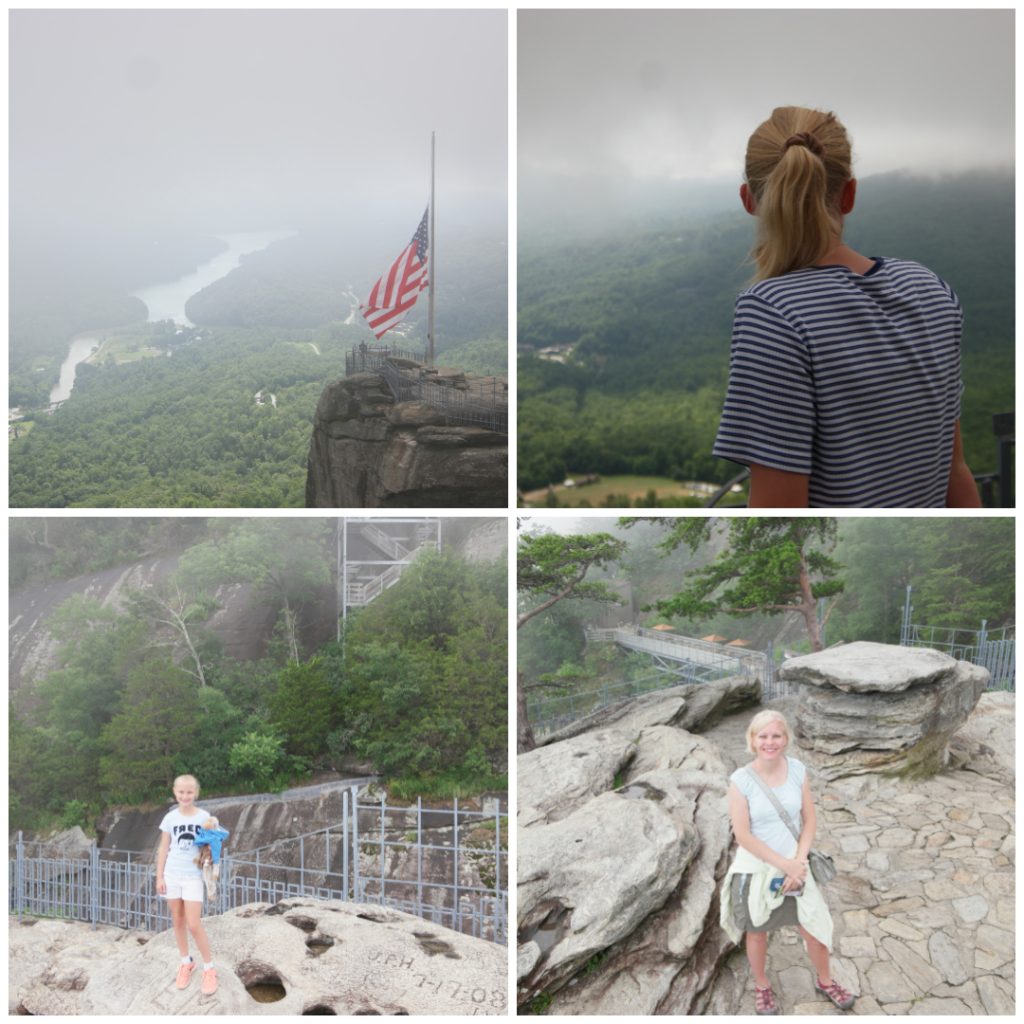 Once you go up to Chimney Rock on a clear day you can see about 75 miles. We could see quite a bit, but at first it was a bit cloudy. My oldest daughter and I decided to go up to Exclamation Point which is another 200 feet above where Chimney Rock was. The hike was fun and you could see quite a long way! We did not want to take the Skyline Trail, but we did go back down to Chimney Rock and we decided to take the Hickory Nut Falls trail to see the bottom of Hickory Nut Falls. The walk was a great one and not too strenuous. We were glad to see the falls as it was very beautiful. As we walked back, we decided to continue our hike on the Four Seasons trail which we knew would take us back to our car eventually. Both trails were well groomed and very nice hikes. 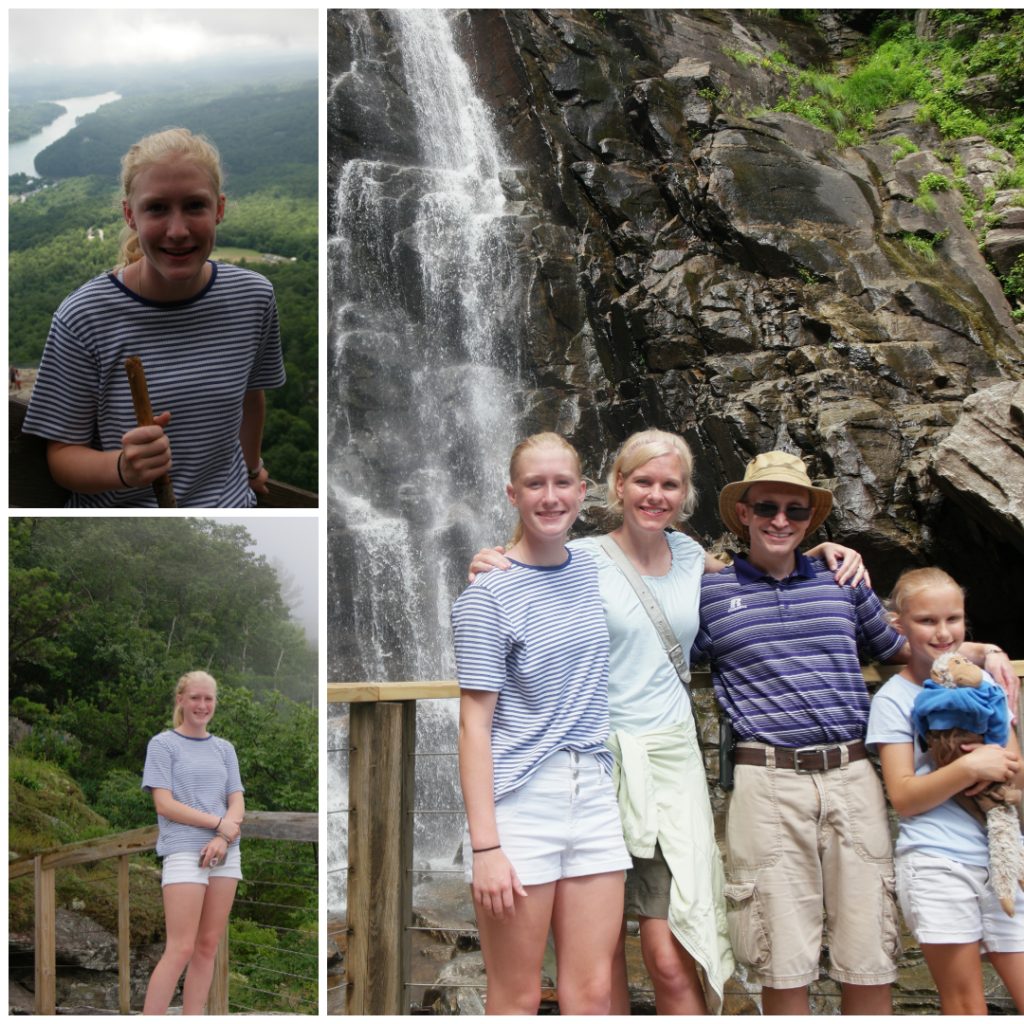 The whole trip to Chimney Rock was a ton of fun and such a great way for the whole family to bond together. We were so glad to have taken a few hours to do this together! 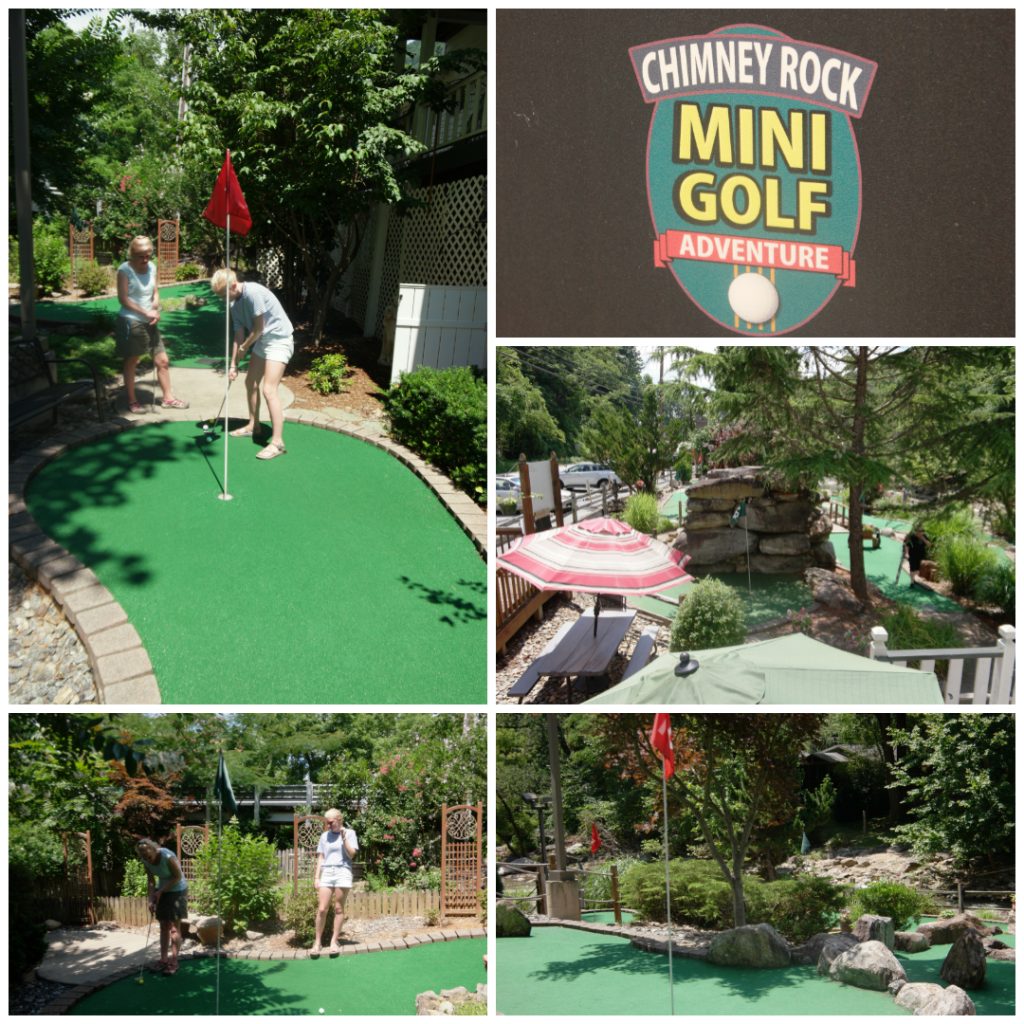 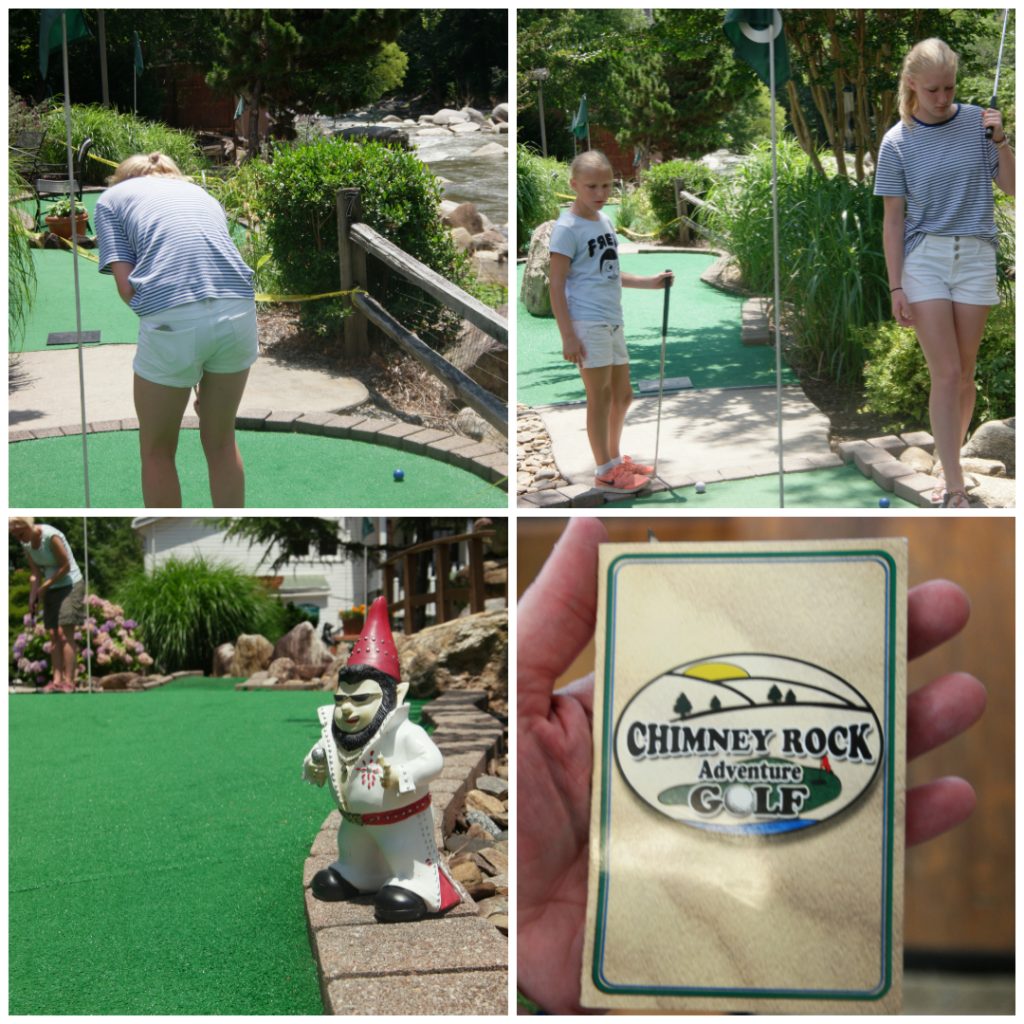 After visiting Chimney Rock we decided to take in a round of miniature golf at Chimney Rock Miniature Golf. The course was fun and had 18 holes. Each hole was challenging in its’ own way and there were some that even had water hazards if you were not careful. The course is right along the rapids so you can enjoy the beauty of the rapids as you are playing some great mini-golf. 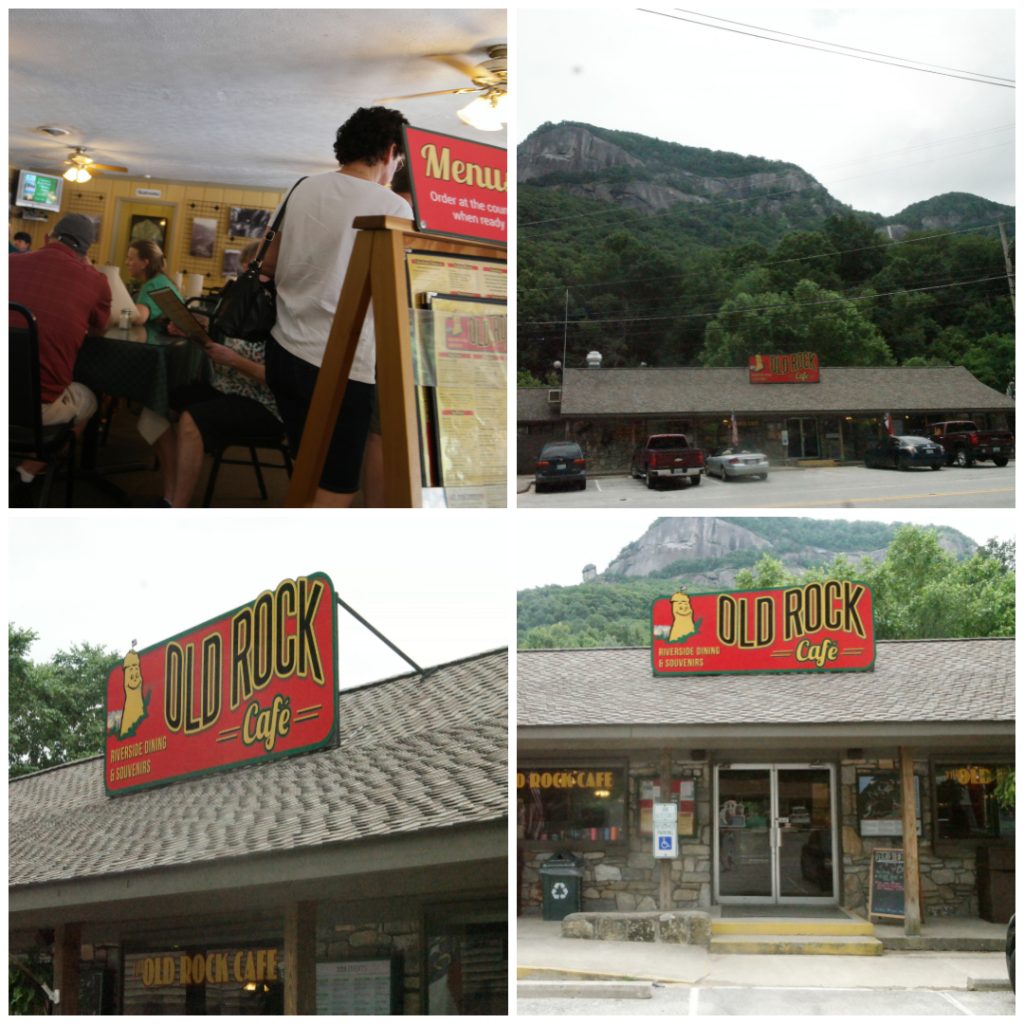 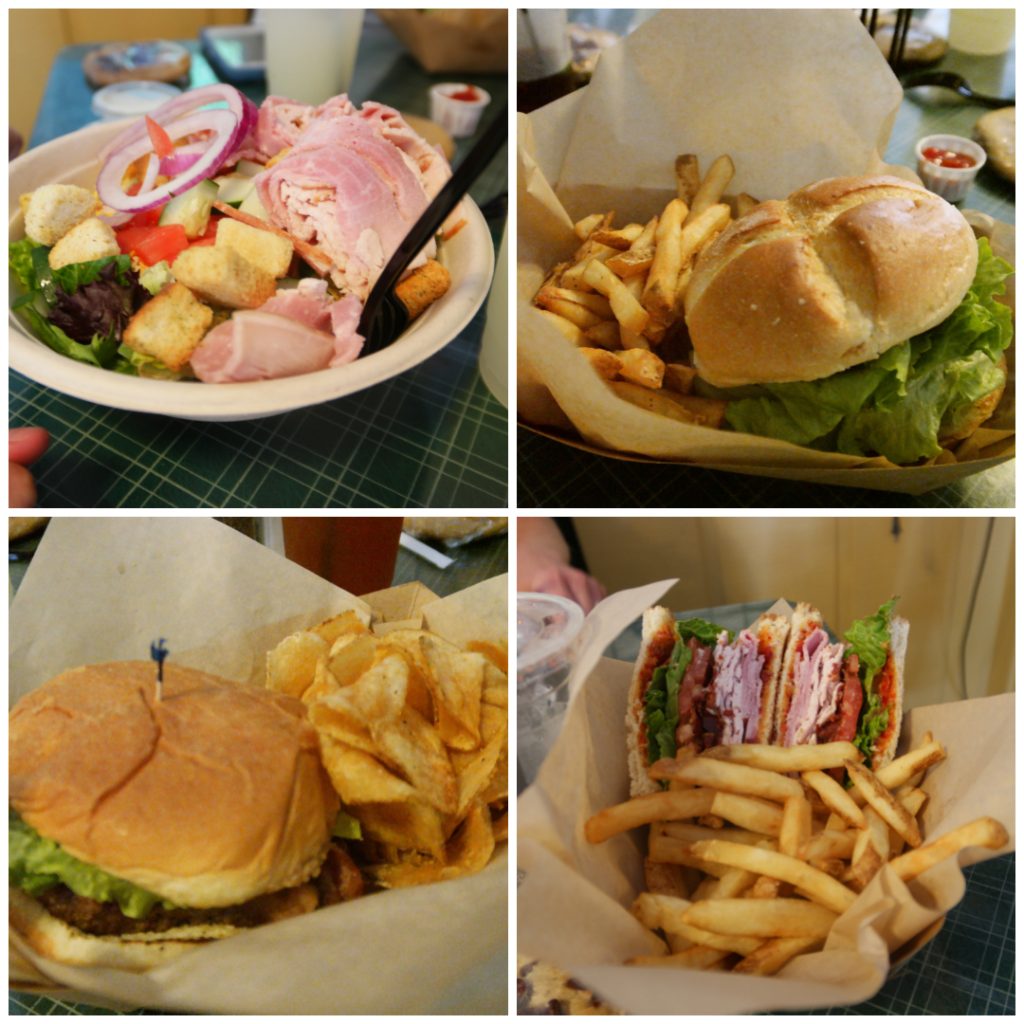 After playing mini-golf we were all ready for lunch and we decided to head to the Old Rock Cafe, a staple of the Chimney Rock Village. This restaurant has a huge menu and the portions are huge. My kids and I tried a few of the sandwiches and burgers including the The Falls Burger, The Old Rock Club and the Chimney Chicken Sandwich as well as the Chef Salad. Each of the items from the menu were delicious. We were very impressed by the amount of food, but also by the quality of food that you get! We left the Old Rock Cafe completely filled up and so glad that we had visited. We would highly recommend this restaurant to everyone! (Check out the lunch menu!) 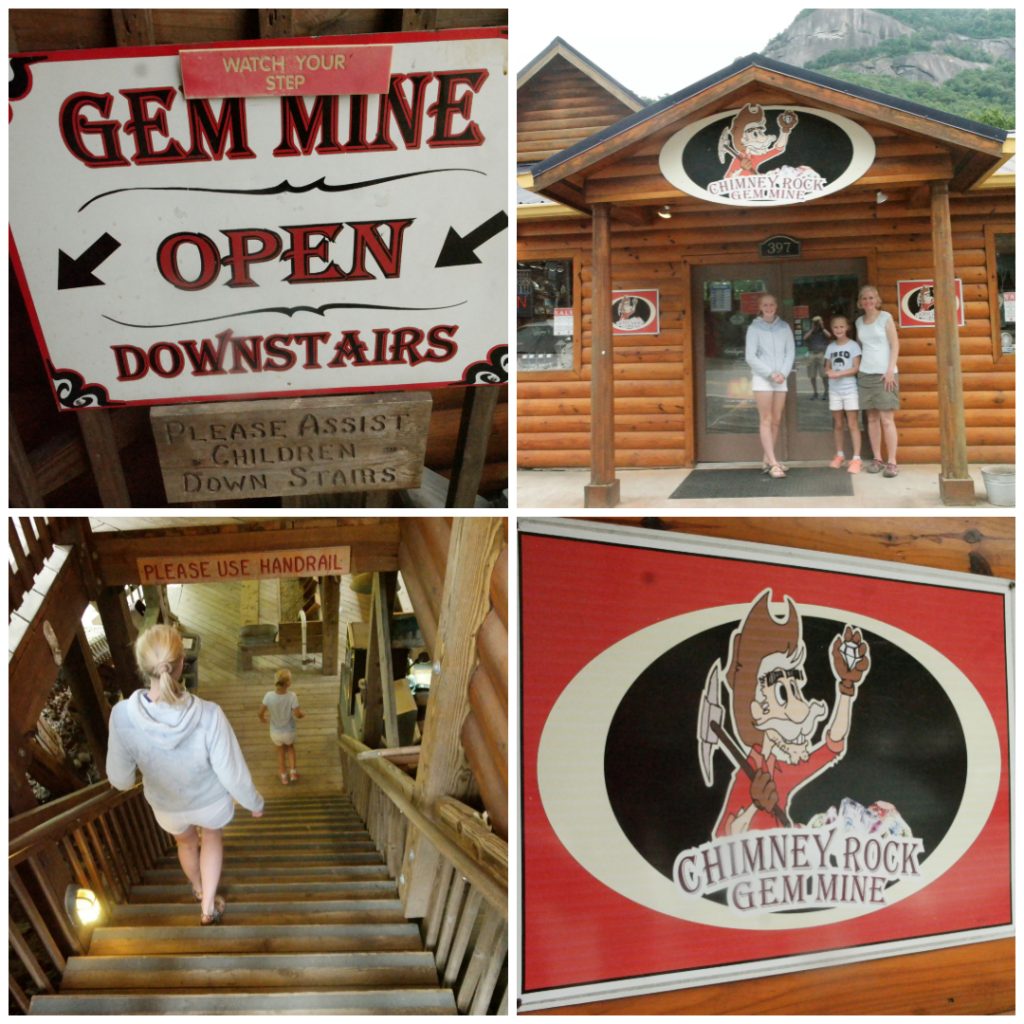 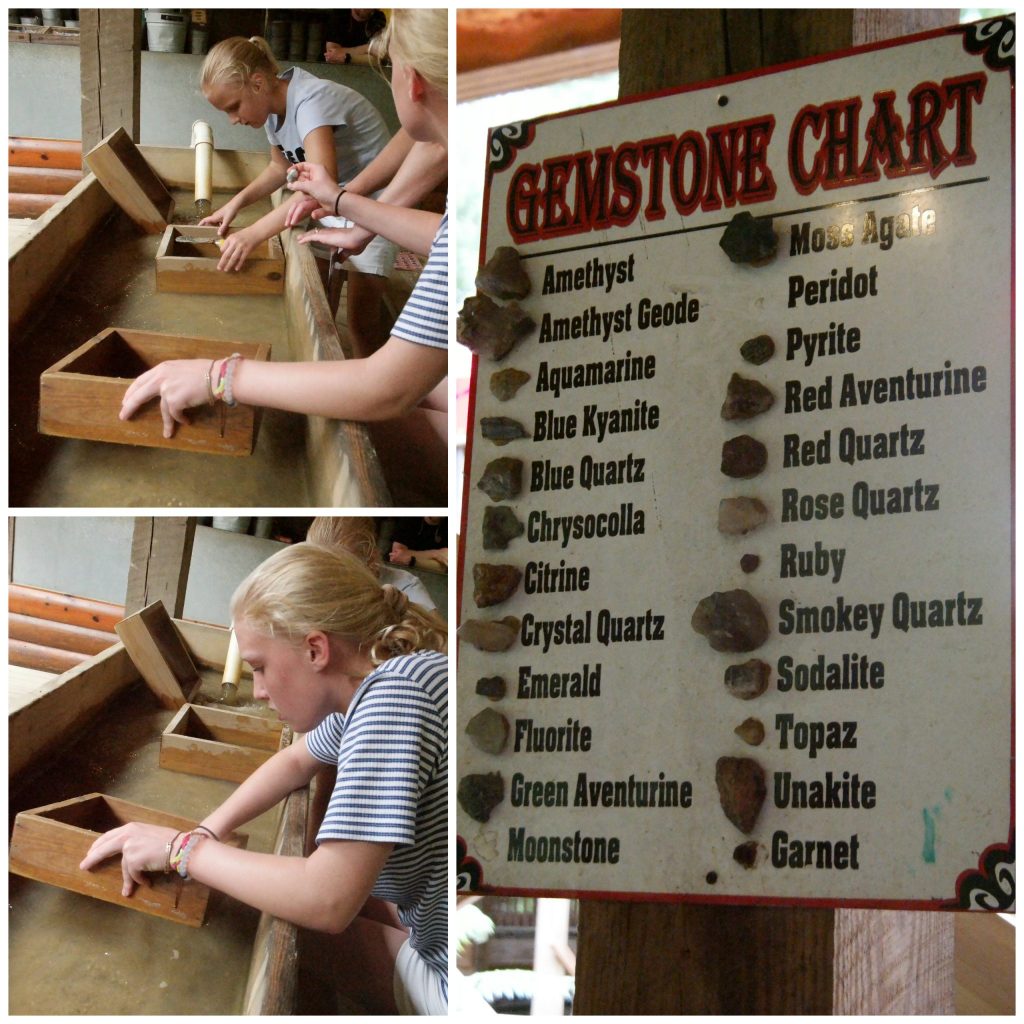 After lunch we walked to the building next door as the kids wanted to go gem mining and we were lucky to find that the Chimney Rock Gem Mine was so close.  When we went into the store we explored all of the amazing gemstones, jewelry and more that they had for sale and then we went downstairs so the kids could do some gem mining for themselves. We got a bucket that they could sift through and they had a ton of fun sifting through the sand in the bucket to see what they could find. They found some very fun gemstones in the time that they were mining and it was a nice way to sit down and relax after lunch and some hiking. 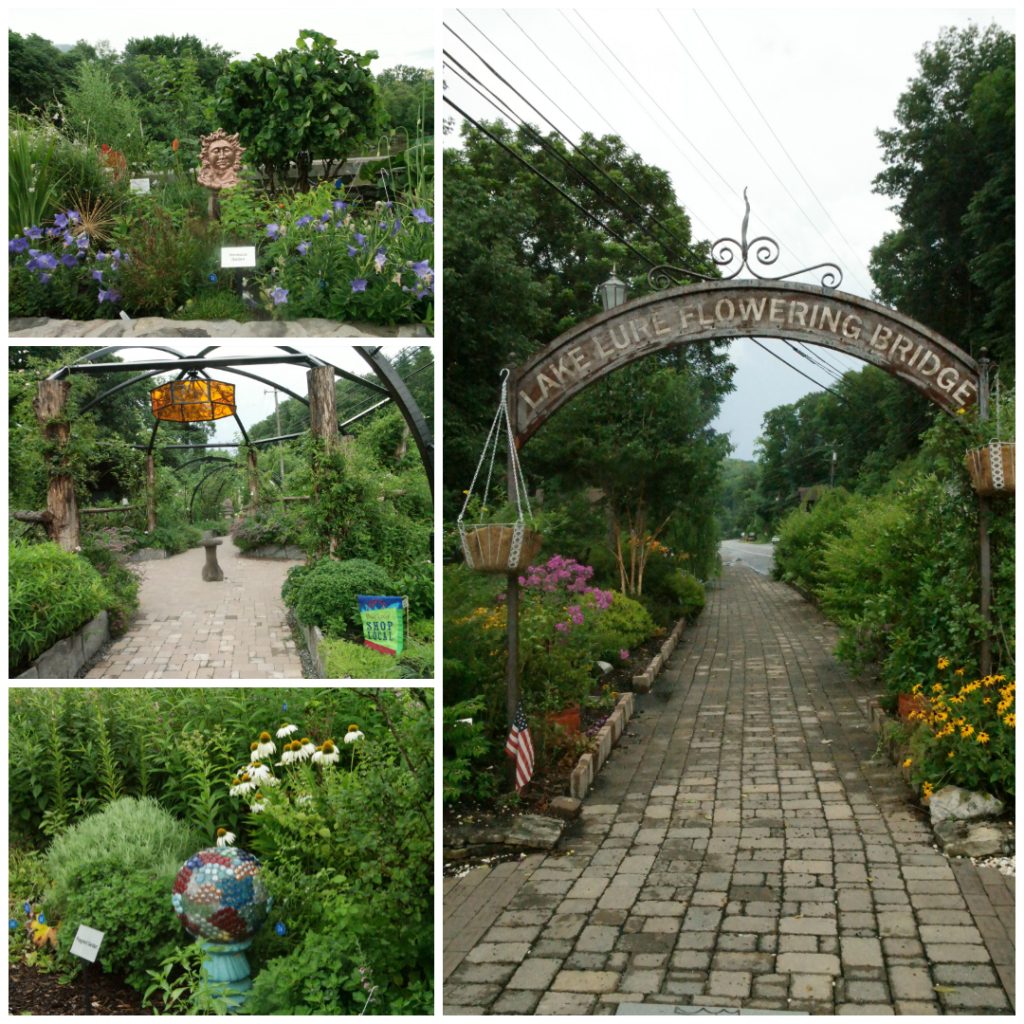 We moved toward Lake Lure and stopped by the Lake Lure Flowering Bridge which were many different flowing beds that were created by volunteers. This bridge is completely covered by many flowers, herbs and more and really is truly a site to see. My wife loves flowers so this was a stop that she truly appreciated. 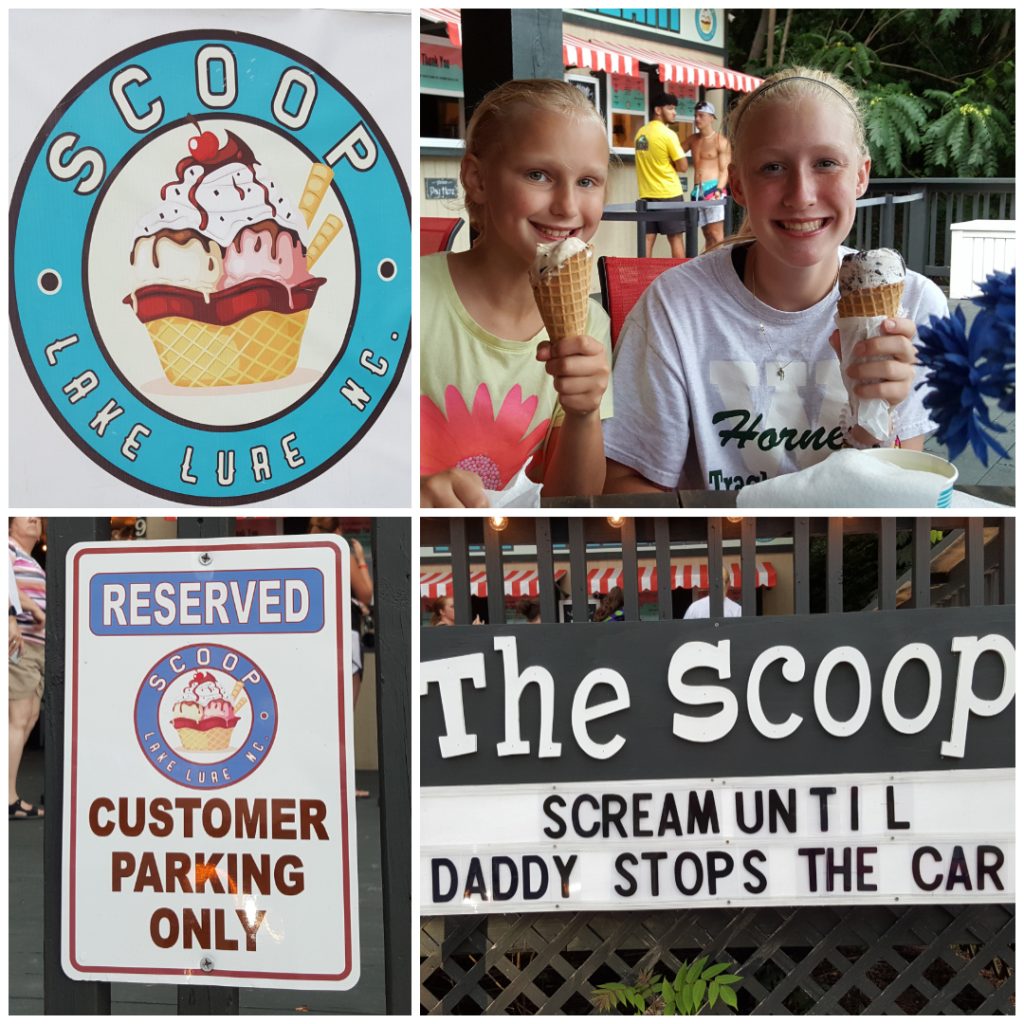 After the visit to the Lake Lure Flowering Bridge, we ended the day getting some ice cream at Scoop Ice Cream. The ice cream that they have at this family owned ice cream shop was simply delicious. We were impressed that they offer Gifford’s Ice Cream which is a brand from Maine that focuses on offering only the more premium ingredients.  The ice cream that we tried was out of this world and if you have never tried this ice cream before you do not know what you are missing.

While we were in Lake Lure we explored the beach and were impressed with the water slides and the beautiful beach that is offered to all!

Today’s visit to Chimney Rock and Lake Lure was so much fun. If you are visiting Western North Carolina, I would highly recommend visiting both of these towns as I know that they were high points of our trip! 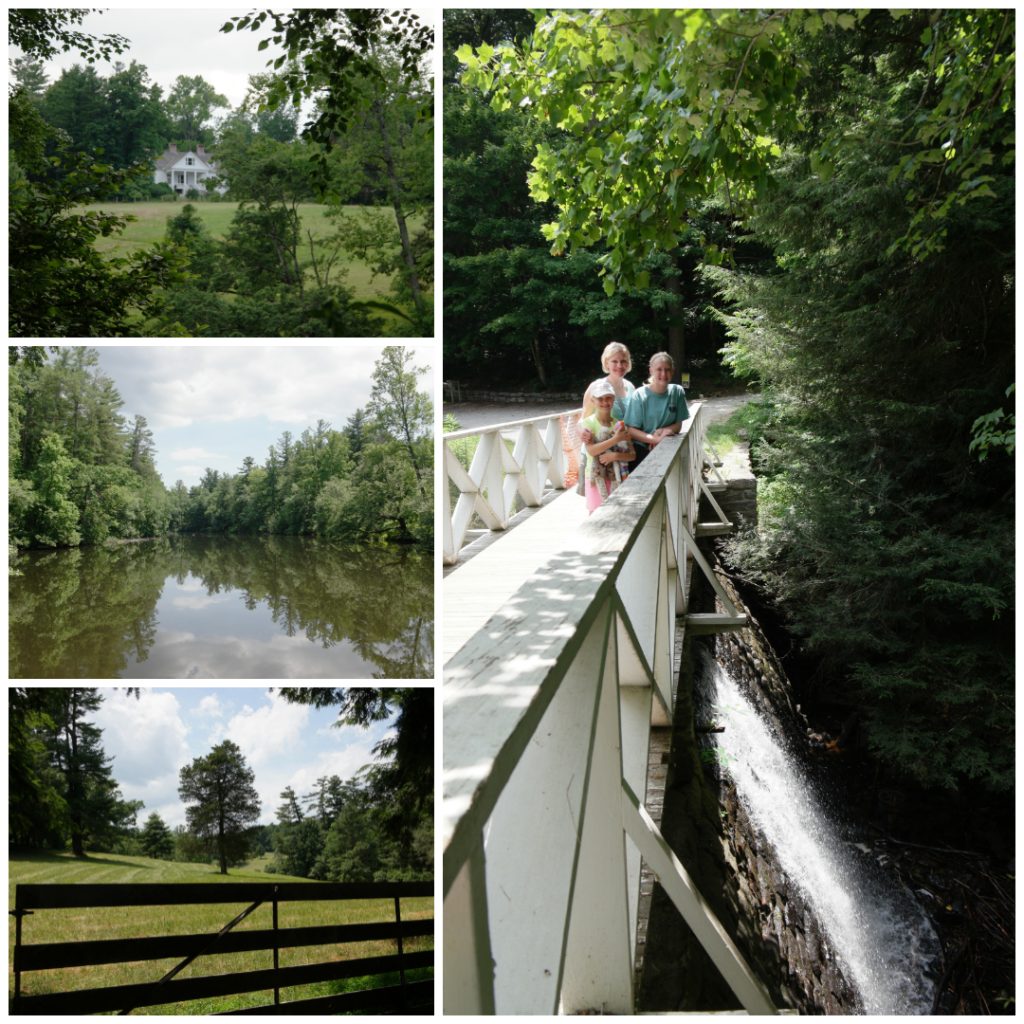 I have always loved Carl Sandburg. His poetry captured so much of America to me and he really was always able to speak to the regular American in my perspective. During our trip to Henderson County we were able to visit the Carl Sandburg home in Flat Rock, North Carolina and I am so glad that we did.

The Carl Sandburg home is situated on 225 acres of land. You have to park a ways away from the house and if you plan to have a tour you should plan this ahead of time as they do these on the hour. The parking is limited, so you have to know this as well. Once you park you will have to walk about 10-15 minutes if you take the short route to get to the house itself. 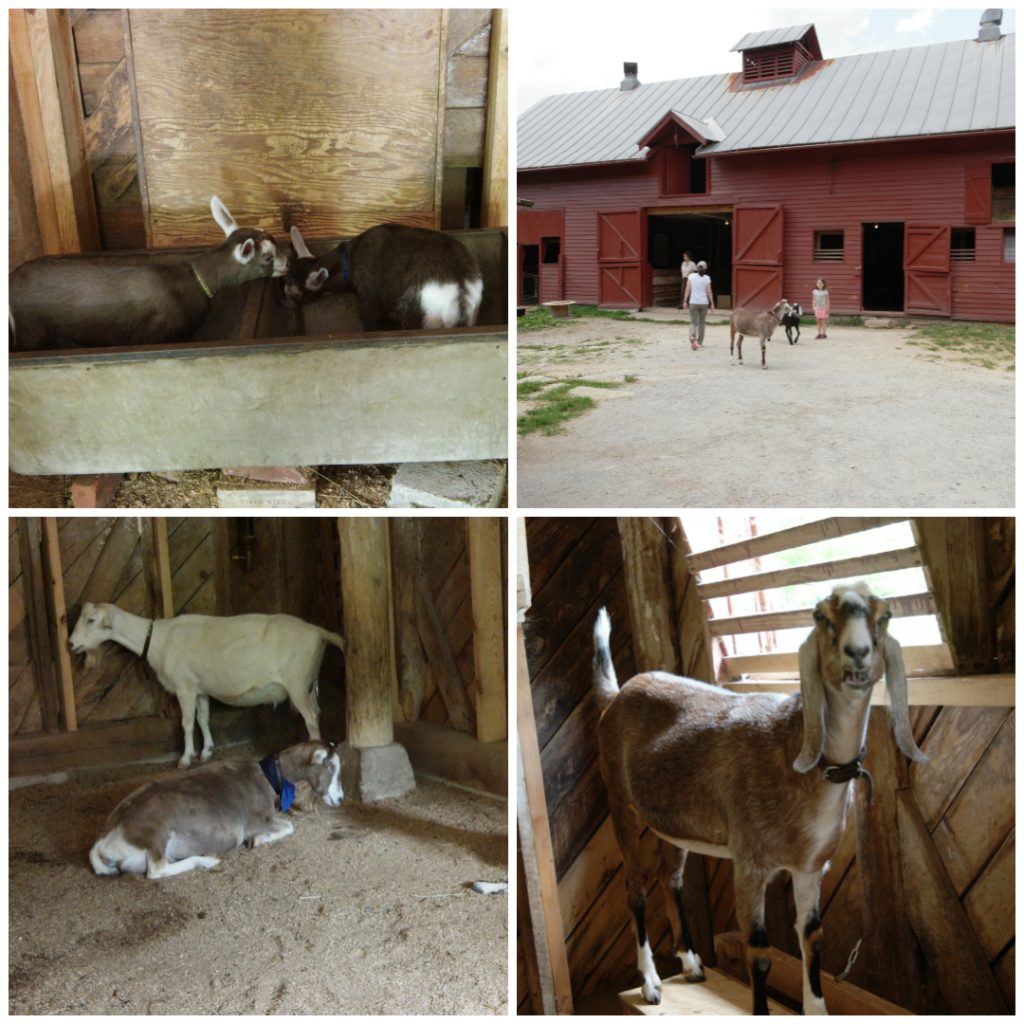 Outside of the home itself, there are a number of other outbuildings that you can explore and learn from and the goat barn is definitely something that everyone should see, and if you can go when the baby goats are around you will definitely be in for a treat.

The girls loved interacting with the goats, and if I am honest, so did I. The goats loved the attention and you really can snuggle up, scratch their ears and just get to know them while you are waiting to visit the home. Why does the home have goats? Well, Carl Sandburg’s wife, Lilian, ran the home (named Connemara ) as a working farm with dairy goats that won many awards. 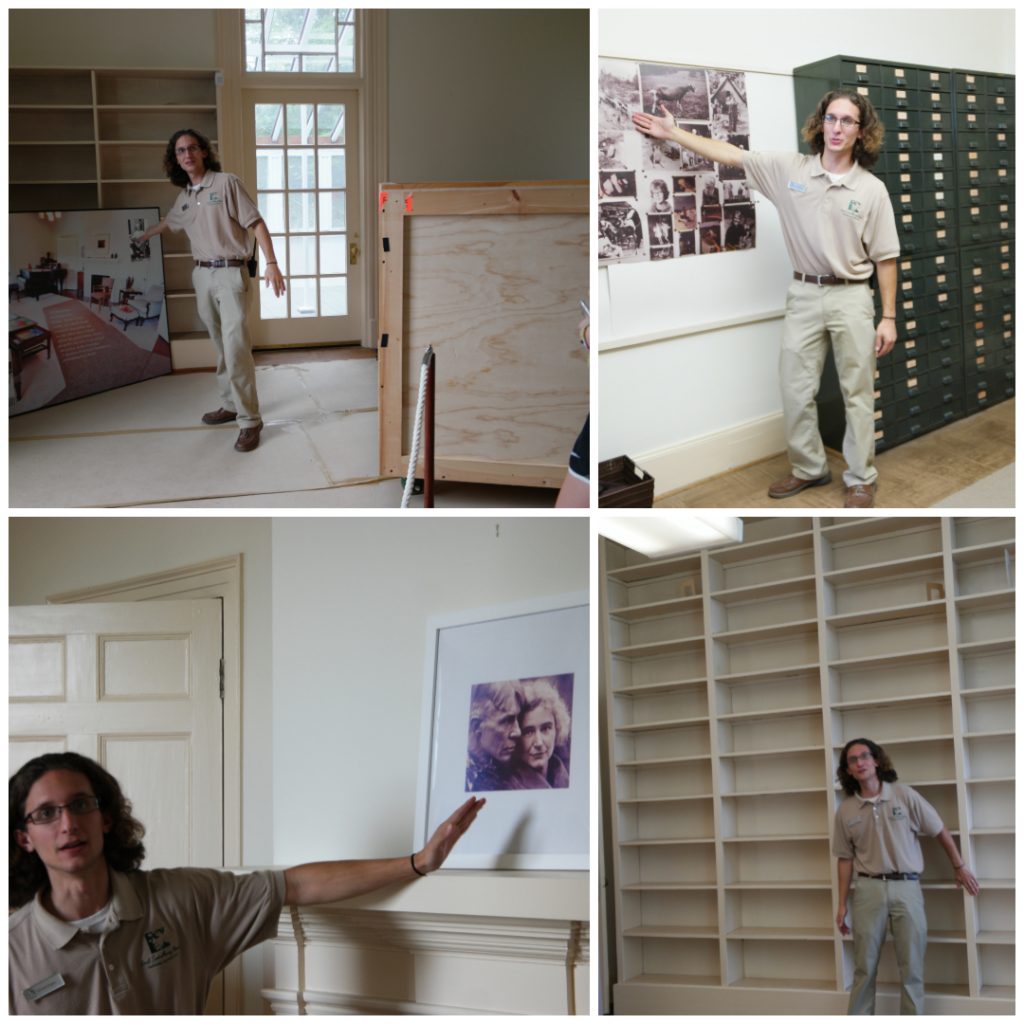 After we visited with the goats it was our turn to go into the Carl Sandburg home. When we showed up for this tour we found out that the home was under restoration so we watched a video before our tour to get a feel for what the home would look like if it had everything within the home. After watching the video we went on a tour with a great tour guide (an intern with the Park Service) named Michael Dages. Michael really knew his history and you could tell that he loved Carl Sandburg and the history of the home as well. Michael allowed us to truly see the home for what it was, even though most everything was out of the home. One of the things that was so amazing was that we did not realize that Carl Sandburg moved to Flat Rock from Harbert, Michigan. Also, when they moved, they moved approximately 14,0000 books to the new home. The whole home was filled with tons of bookshelves and it would have been amazing to see all of these bookshelves filled. Michael let know they would hopefully have everything restored to normal for the 50th anniversary of the US Park service running the site in October. 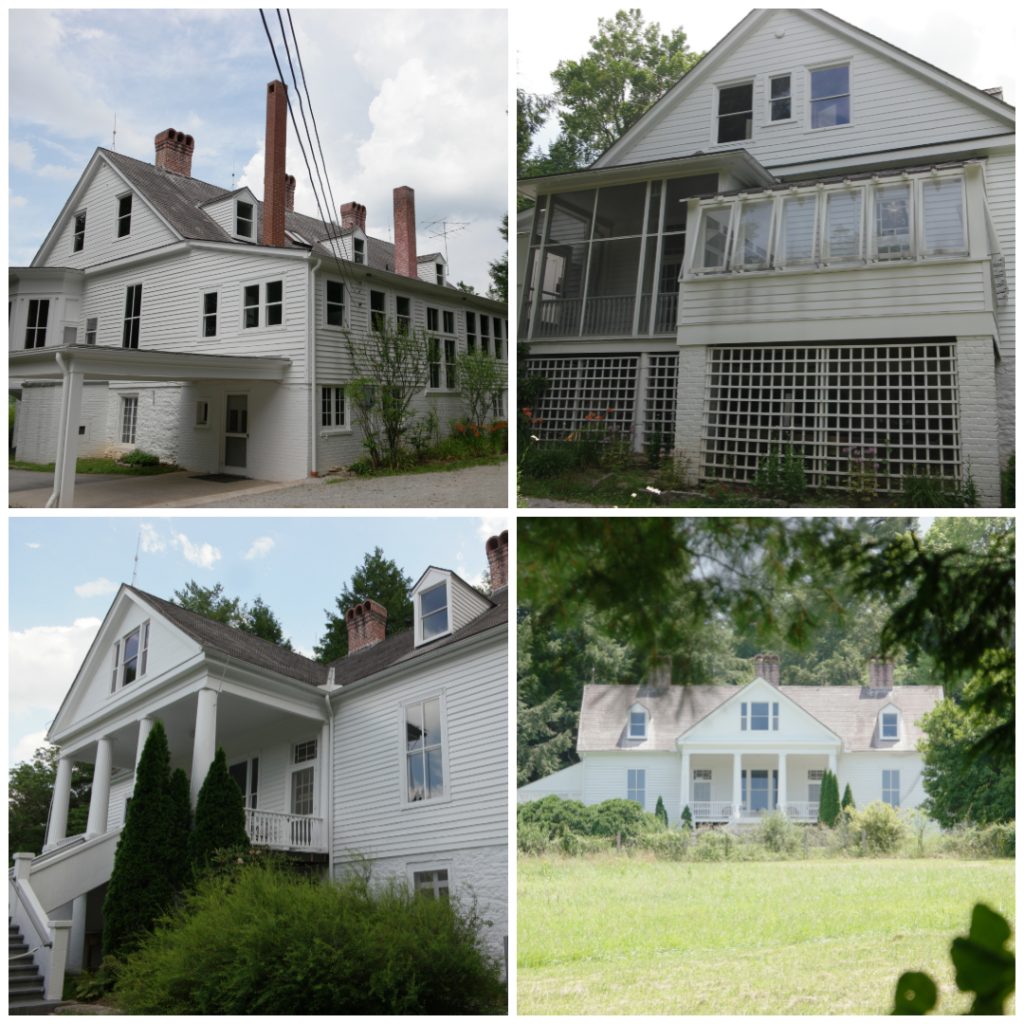 While we did not get to see the home filled, Michael Dages did an amazing job at painting a picture of the home for all of us and we loved seeing and experiencing this day and we definitely would love to come back in the future to explore the trails and to see the home put back together in the future!

If you come to Henderson County, you should definitely stop and see this beautiful home! 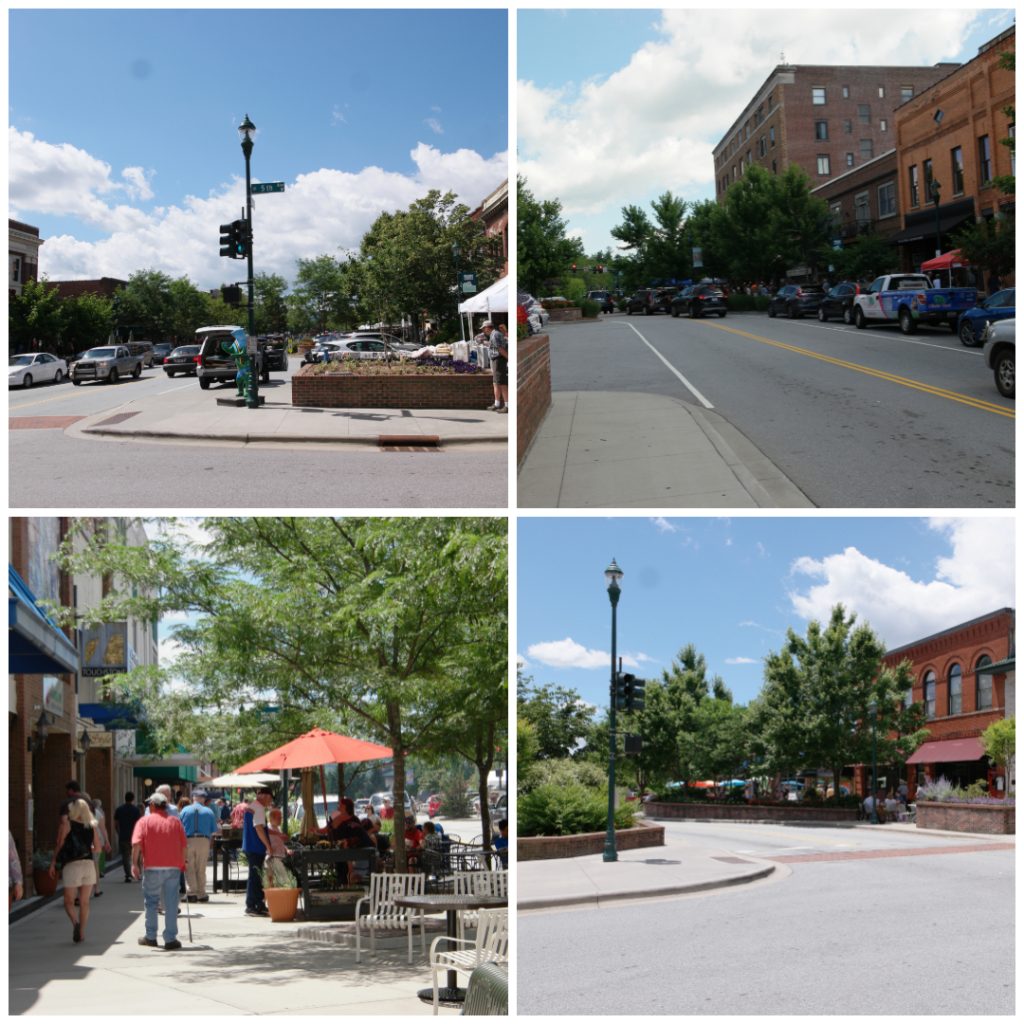 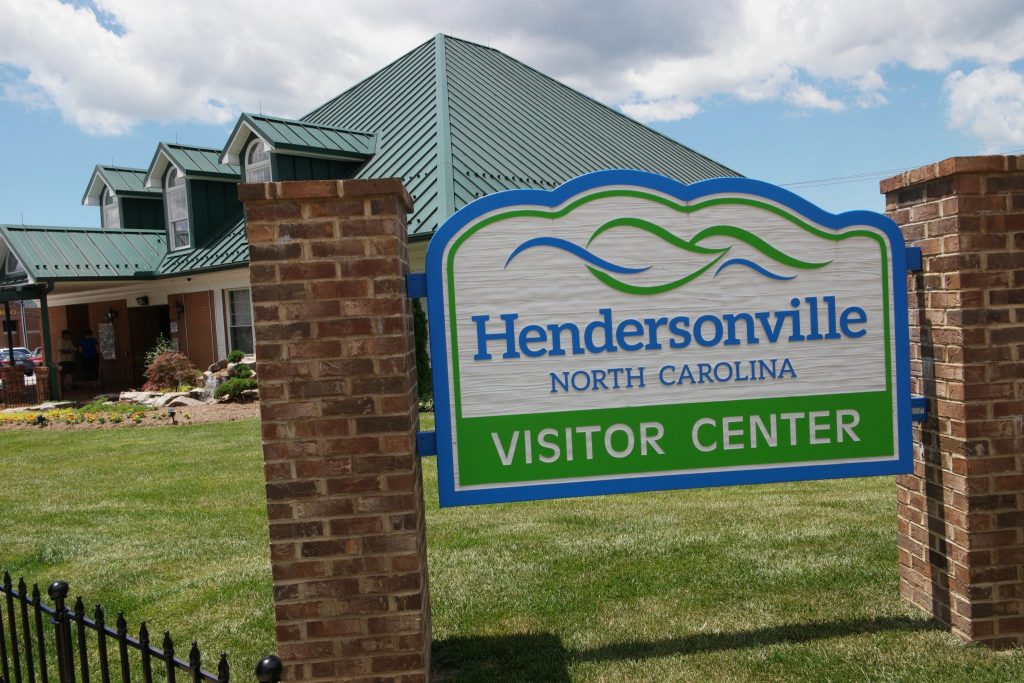 My family and I visited Henderson County North Carolina for the past few days and we have been exploring a number of the sights thanks to the Hendersonville Visitor Center. 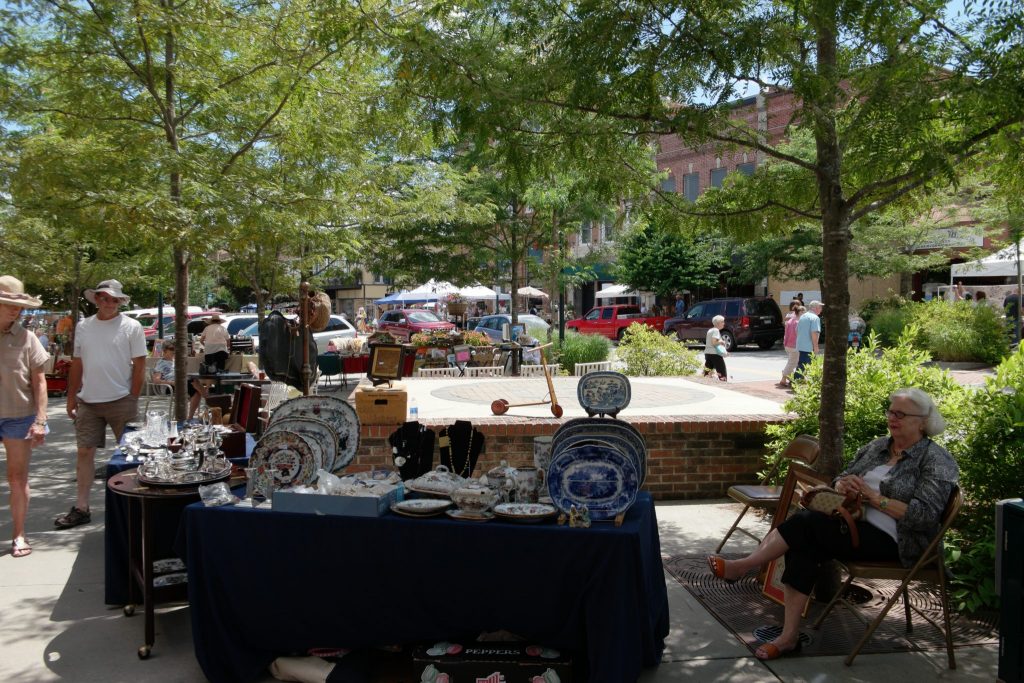 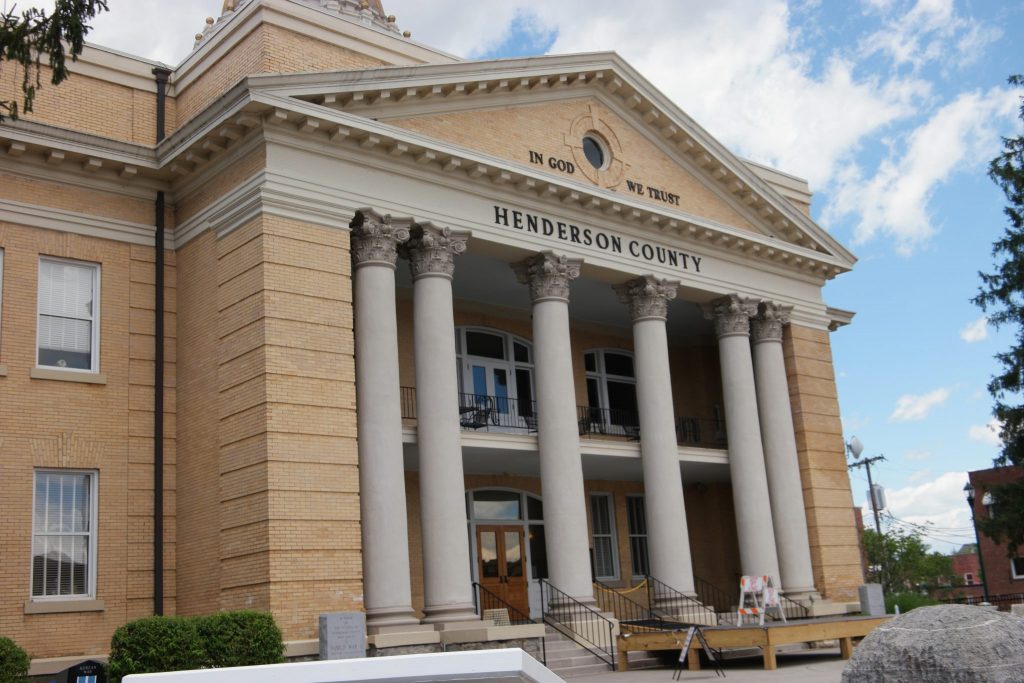 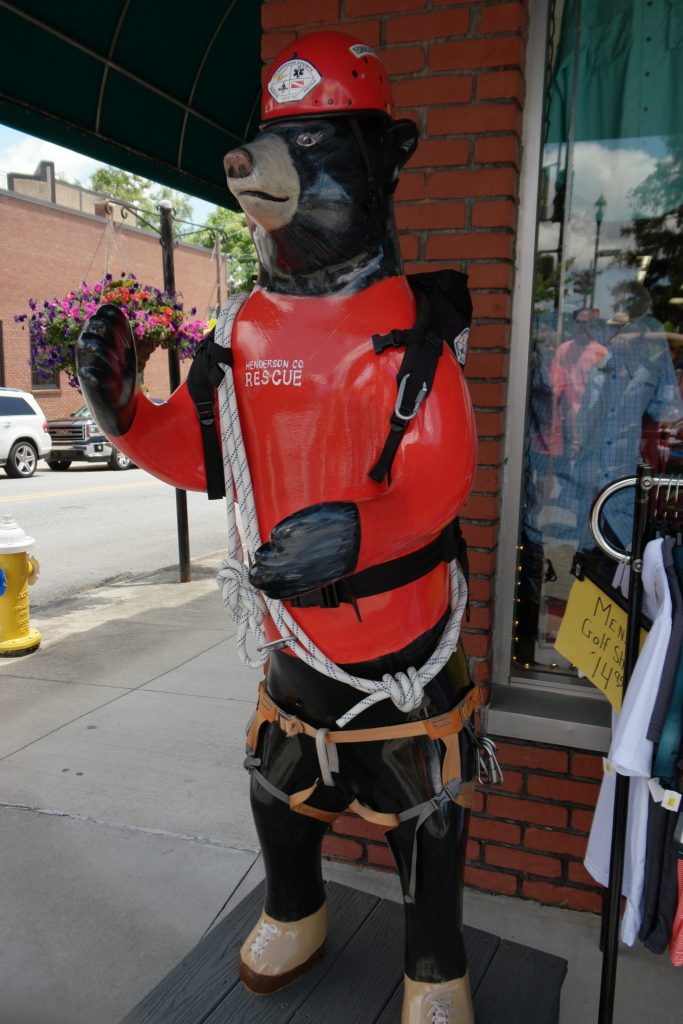 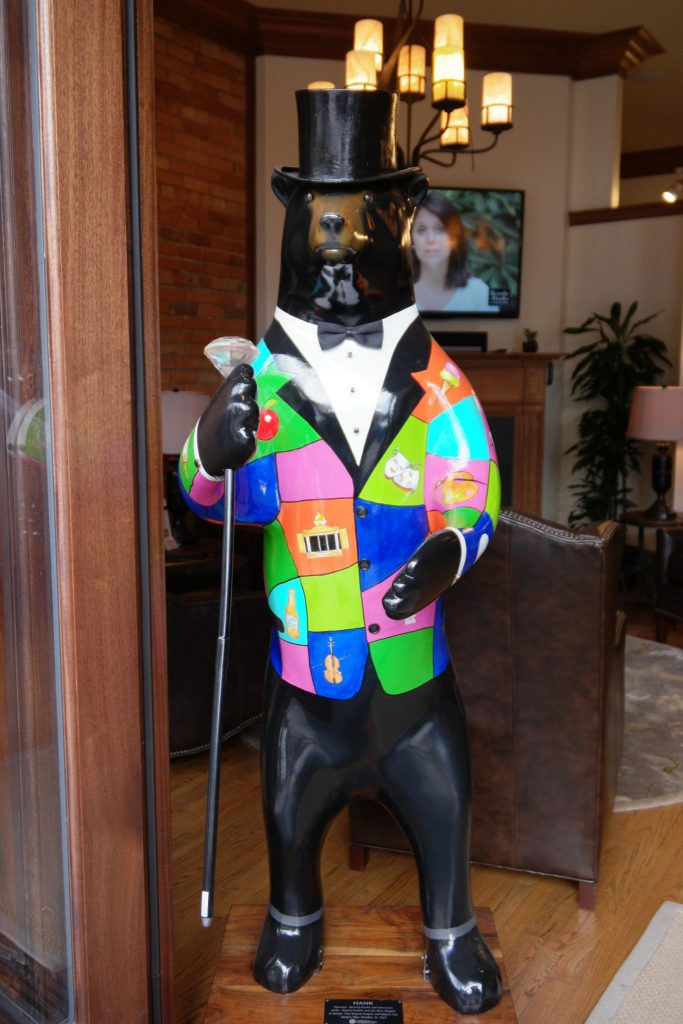 The first stop on our visit was exploring the downtown area of Hendersonville itself. Hendersonville, North Carolina is a very quaint downtown with a little bit of everything for everyone. There are some great restaurants, coffee shops and many specialty shops too.

The day that we explored Hendersonville, they also had a vintage on-street fair with so many booths of antique items for people to explore. This made the whole downtown very busy (in a good way). We ended up walking up and down one side and then we came back up the other side of the street. There were so many things to see and do. Some of our favorite stops while in town included: 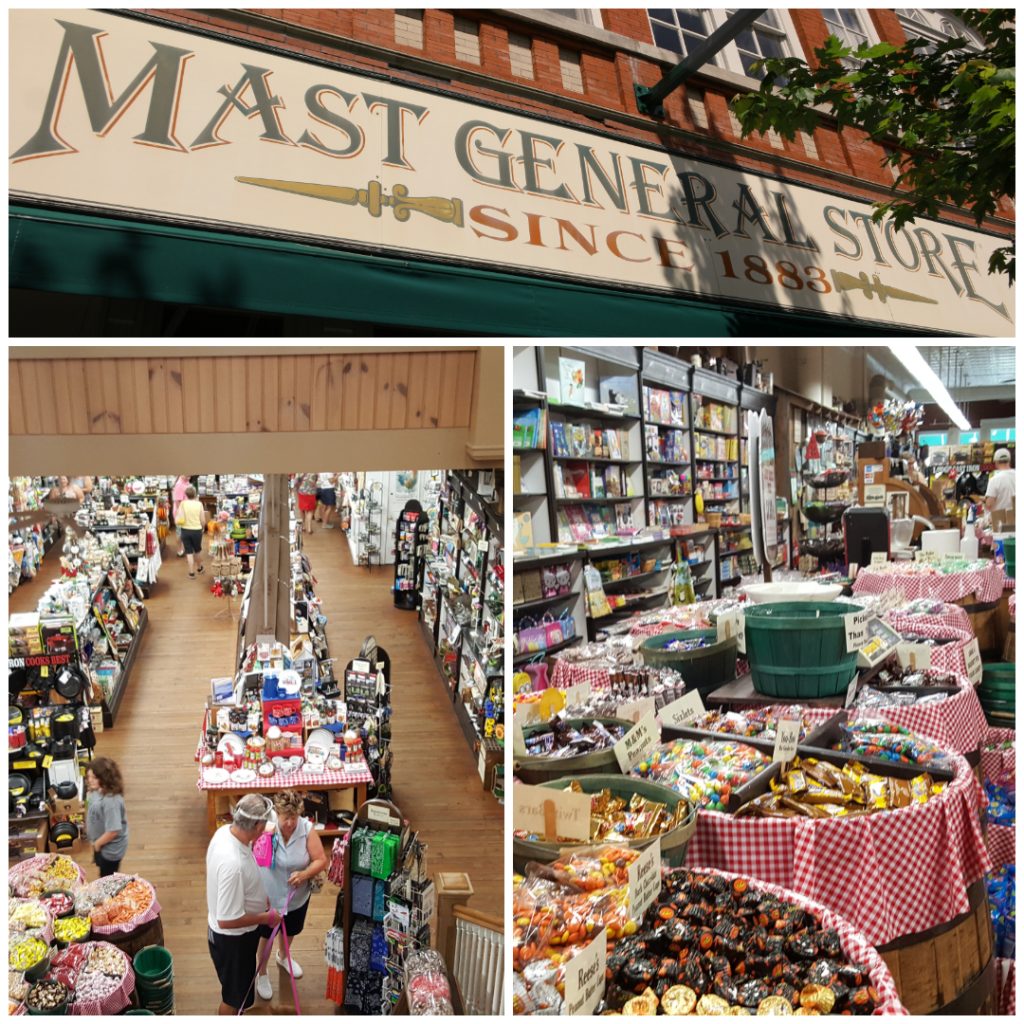 The Mast General Store – an amazing store that has items that not only celebrate Hendersonville, but really offers a little bit of everything including candy, popcorn, clothes, footwear, home goods and other unique items!

Beehive – A Resale Shop – My family loves resale shop and this is an upscale resale shop that has a bit of everything for women. I did not see any clothes for men, but I know that the ladies in my family found some fun finds!

Dancing Bear Toys – This toy store had so many unique items that I have not seen in other stores. Unique plush items, games and the employees are so knowledgeable of the toys that they have in stock. They even give you a ton of recommendations based on the things that you say they you like. 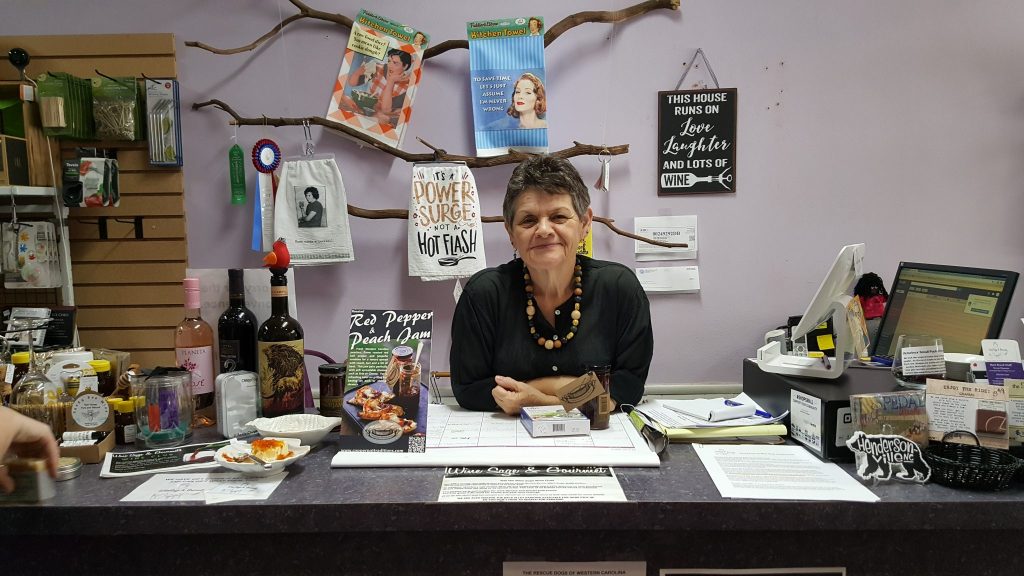 Wine Sage & Gourmet – If you are looking for unique kitchen items this is the shop that you will want to stop within. The employees know kitchens and have a ton of ideas to help you find the right item for your own home or for a gift! While you are here though you will want to go into the basement where they have a HUGE variety of wine and also do cooking classes. Stop in for a wine tasting with experts that really know their wines.

There are so many other places to explore. Check out a full list of stores 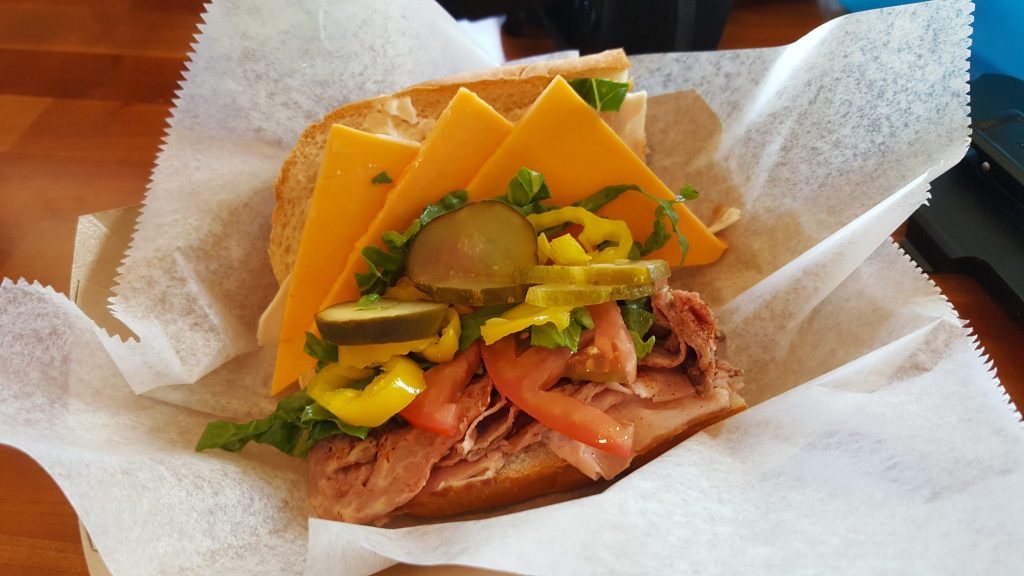 While the whole list of stores is above, also check out all of the restaurants. We had lunch at the Mountain Deli and the sandwiches were HUGE (the sandwich you see above is only half of what we received)! 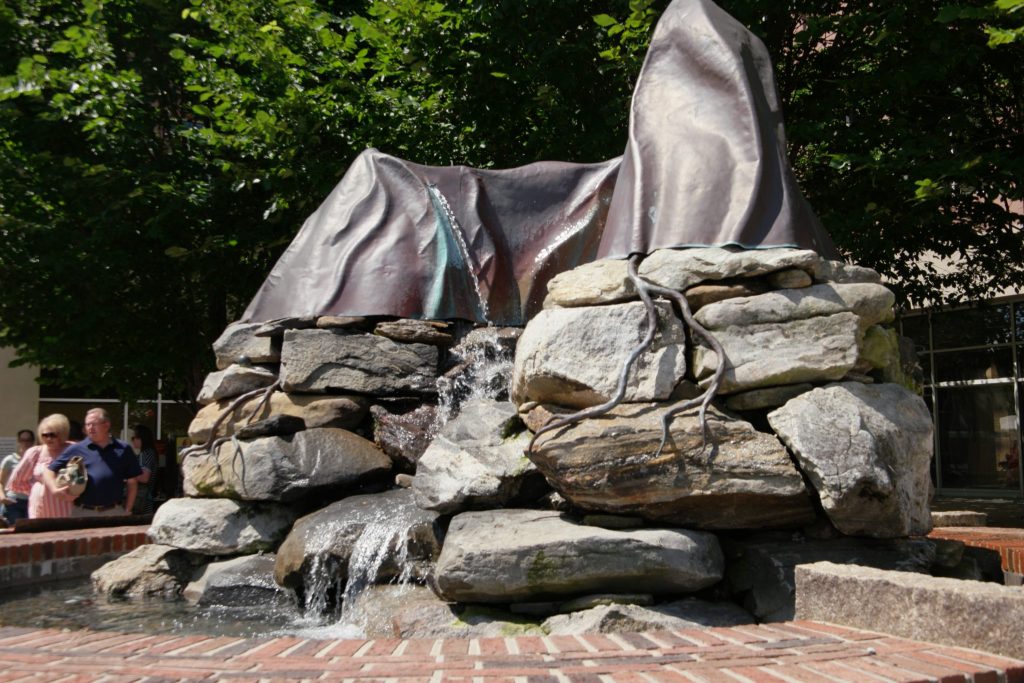 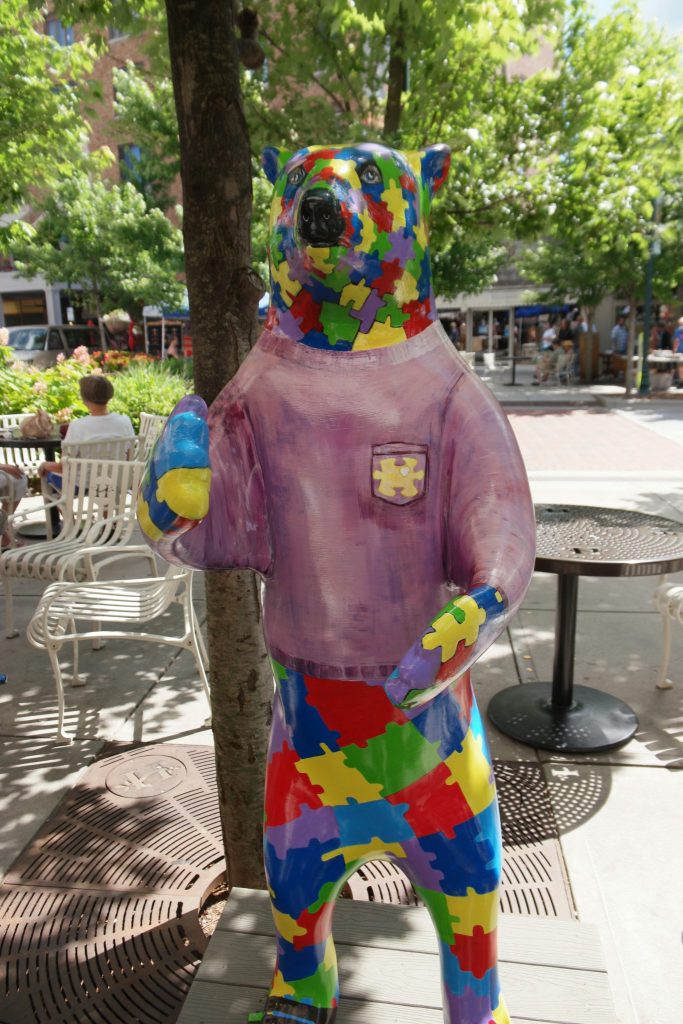 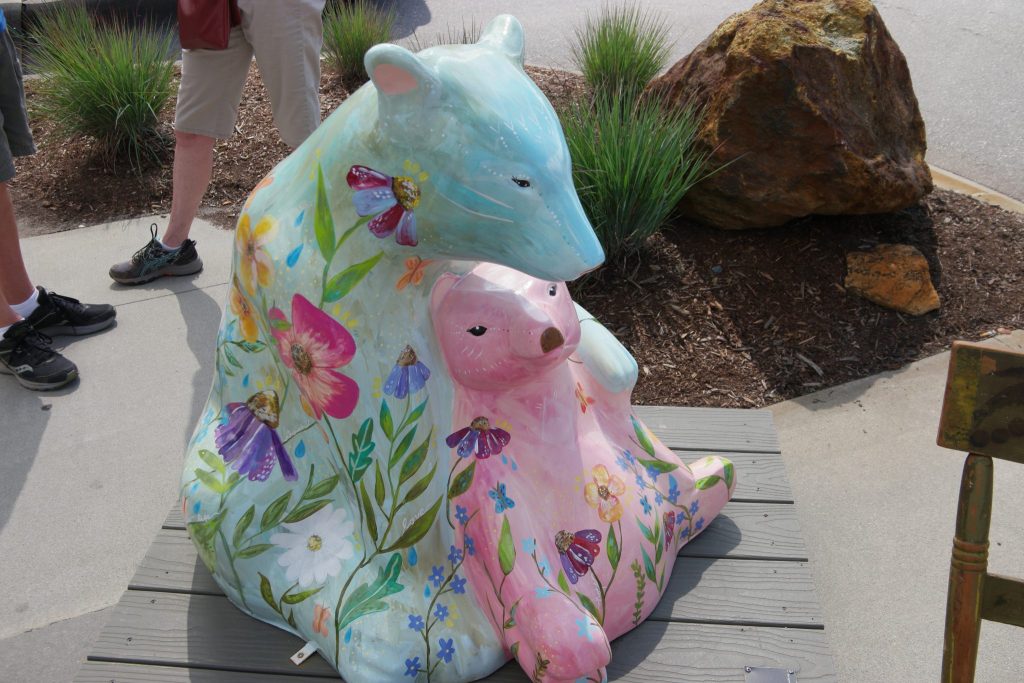 This is a great town with a little bit of everything for anyone. If you have never explored this great town, I highly recommend it to everyone!