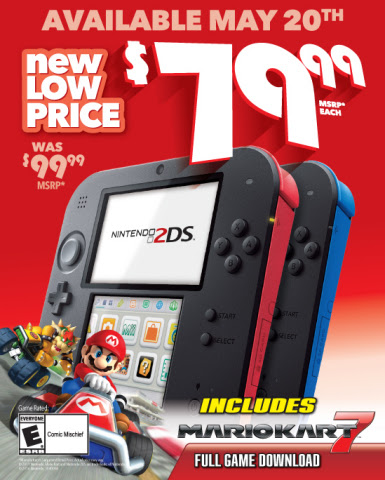 The entry point to Nintendo 2DS and Nintendo 3DS games and franchises has never been more affordable. On May 20, Nintendo will lower the price of its kid-friendly portable Nintendo 2DS system to a suggested retail price of $79.99, a remarkable savings from the previous suggested retail price of $99.99. Some systems even come pre-installed with the universally popular Mario Kart 7 racing game, making the new value price even more appealing for parents who are looking for an entry-level gaming system for their young gamers.

Style Savvy: Fashion Forward, the third game in the Style Savvy series, gives players a sense of accomplishment by putting them in charge of one of five exciting professions. Players can immerse themselves in a world of fashion by owning a boutique, designing clothes, styling hair, applying makeup or becoming a model. When players make themselves look good, customers who visit their boutiques might start adopting the player’s style. The game includes over 19,000 different articles of clothing, items and accessories to choose from. Players can also learn real-world fashion tips from the Fashion 101 guide. To access Nintendo character-themed clothing and accessories in the game, players can tap select amiibo figures to a Nintendo 2DS, Nintendo 3DS or Nintendo 3DS XL system using the Nintendo 3DS NFC Reader/Writer accessory to trigger an event. Once the event is completed, players can get the special items. The amiibo and Reader/Writer accessory are sold separately. The New Nintendo 3DS and New Nintendo 3DS XL systems feature a built-in NFC reader for amiibo. Style Savvy: Fashion Forward launches Aug. 19.

In the meantime, the Nintendo 3DS family of systems has a library of great exclusive games for every type of player, including New Super Mario Bros. 2, Animal Crossing: New Leaf, Pokémon Omega Ruby and Pokémon Alpha Sapphire. Some of Nintendo’s other big hits in the Nintendo Selects category are also available for a suggested retail price of only $19.99 each. The Nintendo Selects line includes great games like The Legend of Zelda: Ocarina of Time 3D, Donkey Kong Country Returns 3D, Mario Party: Island Tour and Yoshi’s New Island. 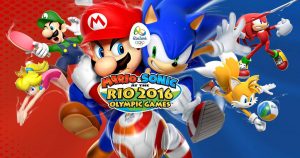 My daughter and I have been having a blast playing the new Mario & Sonic At The Rio 2016 Olympic Games for Nintendo 3DS and you will too!

In the game all of your favorite Mario & Sonic characters are ready to join the fun in Rio de Janeiro, host of the Olympic Games in 2016. Then you can take the rivalry on the road with this portable collection of supercharged events like Soccer, Table Tennis, or test your skills in a challenging game of Golf.

Features of Mario & Sonic At The Rio 2016 Olympic Games :

Below is a video of our thoughts on the game itself! 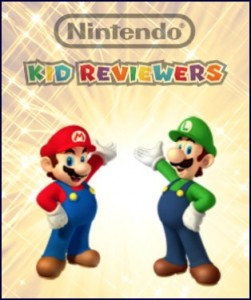 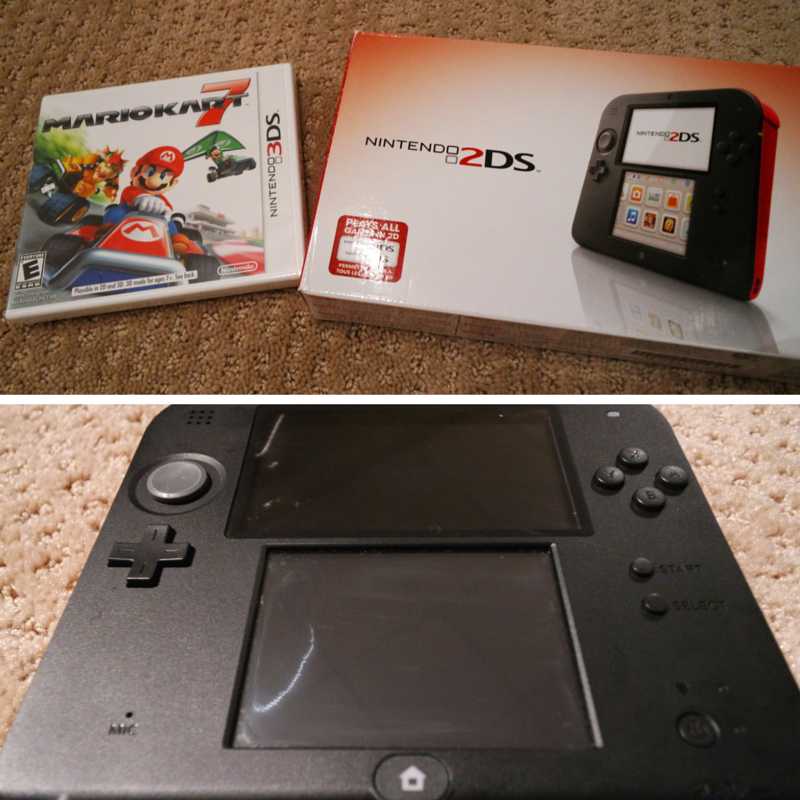 My family loves gaming and especially being able to take video games with us on the road. I had tried out the Nintendo 3DS in the past, but recently had been sent a Nintendo 2DS gaming system to try with my family as well.

I took the Nintendo 2DS for a test drive over the past few weeks and from the first moment that you see this, it looks different than other gaming devices. It is distinctive and stands out, but also made me think of older style gaming devices too (think back to the Original GameBoy or GameBoy Advance – where they also had unique designs). That being said, this is not the same as either of those. Instead, you get a square design with some great color options (crimson red or electric blue). These have been the two main colors, and while there have been a few other special releases, these are the tried and true ones!

You might first think that because this is called a Nintendo 2DS that the 3DS is superior. This is very subjective. To be clear the Nintendo 2DS does play all of the DS and 3DS games in 2D.

One of the best things about the Nintendo 2DS is their price. The Nintendo 2DS has a new price that was just unveiled. The new price is affordable at only $99 (it was $129). Also, for the $99 you also get Mario Kart 7 with the system too! This is a great value, and for the same price you would spend on a momre expensive console you could add on a few games for this and be set for a while too.

The Nintendo 2Ds does have a smaller screen than the 3DS XL, but I came to find that it was just as enjoyable for me to play the the Nintendo 2DS as it was on the 3DS and both my daughters did not seem to mind either. The screen was actually the same size as the original 3DS.

In playing the Nintendo 2DS I found that the device offered great graphics and the system was very responsive to me as a player. The battery life was good but not stellar compared to some other devices that I have tried in the past. I have found that it will last about 4-5 hours before I need to recharge (based on usage) and it takes about 3 hours to be back up to full charge again.

In the end as a consumer you really have to consider what you want and what you need and purchase accordingly. I will say personally, for the price, I love the Nintendo 2DS, and think you will too!

Designed for your family

Launching on Oct. 12 at a suggested retail price of $129.99, the Nintendo 2DS is designed specifically for anyone looking for an entry point into the exciting world of Nintendo hand-held video games. The system maintains many of the same hardware features as Nintendo 3DS, like the touch screen and traditional gaming buttons – all in a compact and comfortable package.

Available in both red and blue, the durable system is a great stocking stuffer for young kids who are ready for a complete gaming experience. The system also launches on the same day as Pokémon X and Pokémon Y, the next installments in the kid-favorite Pokémon series.

In addition to young audiences, Nintendo 2DS is the perfect entry point for anyone that is interested in experiencing the latest and greatest Nintendo 3DS games like Animal Crossing: New Leaf and Mario & Luigi: Dream Team, as well as upcoming games The Legend of Zelda: A Link Between Worlds and Mario Party: Island Tour. And that’s not even including the fact that Nintendo 2DS is able to play the entire library of more than 2,000 Nintendo DS games.