On vacation in Los Angeles, Walter, the world’s biggest Muppet fan, his brother Gary (Jason Segel) and Gary’s girlfriend Mary (Amy Adams) from Smalltown, USA, discover the nefarious plan of oilman Tex Richman (Chris Cooper) to raze the Muppet Theater and drill for the oil recently discovered beneath the Muppets’ former stomping grounds. To stage a telethon and raise the $10 million needed to save the theater, Walter, Mary and Gary help Kermit reunite the Muppets, who have all gone their separate ways: Fozzie now performs with a Reno casino tribute band called the Moopets, Miss Piggy is a plus-size fashion editor at Vogue Paris, Animal is in a Santa Barbara clinic for anger management, and Gonzo is a high-powered plumbing magnate. With signature celebrity cameos, Disney’s “The Muppets” hits the big screen Nov. 23, 2011.

When Walter, the world’s biggest Muppet fan, his brother Gary (Jason Segel) and Gary’s girlfriend Mary (Amy Adams) discover the nefarious plan of oilman Tex Richman (Chris Cooper) to raze the Muppet Theater, they help Kermit reunite the Muppets to stage a telethon and raise the $10 million needed to save the theater. 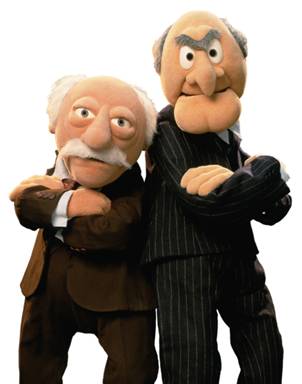 GUIDE TO GOING TO THE MOVIES

With Disney’s “The Muppets” coming out in theaters soon, Statler and Waldorf offer unsolicited advice and a whole lot of laughs about what to watch for at the theater.

STATLER:    When going to see a movie starring the Muppets, always get a good seat…

WALDORF:   …one that doesn’t face the screen!

WALDORF:   If you arrive late for your movie, stick around…

STATLER:    Never get a bucket of popcorn that’s larger than your car.

WALDORF:   Don’t talk on your cell phone during the movie….

WALDORF:   If you have to explain everything in the movie to the person you’re sitting next

WALDORF:   Sometimes the movie is not out of focus—you are.

STATLER:    Don’t talk back to the movie…

WALDORF:   If you don’t have anything nice to say about a movie…

STATLER:    Spoiler Alert—The Muppets are in Disney’s “The Muppets.”

To see Statler and Waldorf in the balcony (where they belong), check out http://disney.go.com/muppets/portfolio/homepage.html.

Joining Cat Cora in the kitchen is her new Muppet cooking partner, Angelo. A chef with style, panache and a quirky habit of cooking up chaos, Angelo can spice up any meal. And with Muppet favorites like Kermit, Miss Piggy, Fozzie Bear and Gonzo dropping by, one thing is certain: everything is funnier in Muppets Kitchen.

“This has been a great partnership between Disney Online, the Muppets and Cat Cora, and the end result is a fantastic line-up of original content that will entertain families, while offering moms great tips and ideas for ways to create magical meals and spend more time together,” stated Paul Yanover, executive vice president and managing director of Disney Online.

“As a chef and a mother of four boys, meal time is family time at our house,” said Chef Cat Cora. “I hope the delicious and easy to make recipes featured on ‘Muppets Kitchen’ and ‘Hasty Tasty’ inspire more families to get creative and get cooking in their own kitchens!”

“Hasty Tasty” will feature short episodes that focus on giving moms access to step-by-step cooking instructions, specific culinary information, helpful tips, nutritional guidance and advice on how to get kids excited about cooking. Episodes include “Dough-Re-Mi,” “Egg-straordinary Wraps,” “The Really Cheesey Episode,” “Chicken: the Dredge Report,” “Chicken Ins and Outs,” “Herb – The ‘H’ is Silent” and “Frozen Fruit Fun.” Additionally, the “Hasty Tasty” site will offer complete recipes and other helpful culinary content designed specifically for moms. “Hasty Tasty” also has a mobile web site giving moms access to all online videos and recipe ingredient lists on the go, as well as a mix the ingredients recipe game. Text HASTY to DISNEY (347639)* or visit Disney.com/HastyTasty.

About Cat Cora
On and off-screen, Chef Cat Cora (http://www.catcoracooks.com/) continues to make a lasting impression on the culinary community. Her food aspirations began at an early age, and by 15, she developed a business plan for her own restaurant. In 2005, she made television history on Food Network’s Iron Chef America as the first and only female Iron Chef, and in 2006 Bon Appetit Magazine named her Executive Chef and bestowed her with their Teacher of the Year Award. Cat has also authored three must-have cookbooks including Cat Cora’s Classics With A Twist (June 2010, Houghton Mifflin). From partnering with Macy’s for a new restaurant concept called CCQ (Cat Cora’s Que) that premiered in December 2008 to her first stand alone restaurant, Kouzzina that opened at Walt Disney World BoardWalk Resort in September 2009, Cat’s bringing a taste of her culinary influence to both coasts.

About Disney Online
Disney Online (http://www.disney.com/ or text MOBILE to DISNEY or 347639*) a unit of Disney Interactive Media Group, produces the No. 1 ranked community-family and parenting destination on the World Wide Web. Launched in 1996, Disney.com is the online and now mobile web gateway to all of the company’s Disney-branded entertainment initiatives, providing comprehensive access to, and information about Disney movies, travel, television, games, music, shopping and live events.

The Disney Online Mom and Family Portfolio is a leading group of sites that provide inspiration and ideas for parents on a variety of topics important to today’s families, including easy recipes, crafts, traveling with children, pregnancy, and parenting. Other sites in the Portfolio include Kaboose.com, FamilyFun.com and BabyZone.com.