Now as I have said in the past, I am not the most handy, but there was one time in my life, in celebration of J-Mom’s 30th birthday that I wanted to be. J-Mom is a gardener. This is both a past time and a passion for her. Prior to her birthday I had decided that I really wanted to be able to do something special for er that would let her remember this birthday more than others (I had proposed to her on her 21st so you can see I am trying to keep up with this). J-Mom had been wanting to have a potting bench for some time and sometime in the past she had found plans for the building of a potting bnch that she just loved, but she knew that she nor I had the skills to build it.

Little did she know my cunning ways! I decided to contact my Father-In-Law who is a handy guy and who’s father used to be a carpenter (so he knows his ways around wood). He woks a second shift job so I inquired whether he would be willing to work with me to build this special gift for his daughter. Well of course, you can guess his answer. So with this partnership solidified, we went about buying the wood and other supplies for the project.

Well, upon starting the project we began to notice how much more work this potting bench was going to be…and that it was going to take a lot more than one day as it stated on the directions. It actually ended up taking about 2 weeks for us to do this project part time but it was well worth it! 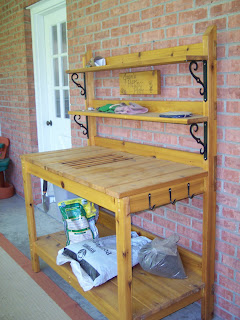 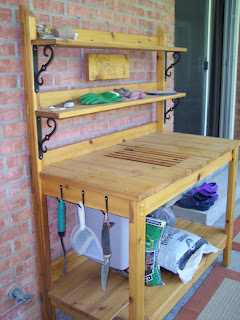 J-Mom’s reaction looked like this when she first received it: 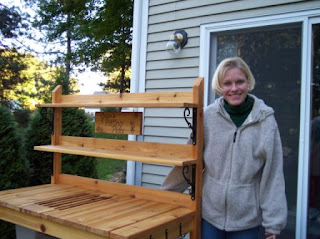 The bench has held up remarkably, and though today is has a bit more dust and dirt on it (as it should), it is a great bench and J-Mom still enjoys it as much as she can. Much of the credit has to go to my father-in-law for the work he did on this. He is the type of man that really goes above and beyond for his family and I truly have learned a lot from him over the past 12 years. He teaches by example and is a great role model of what a father should and can be.

I have been continually amazed at the important role that fathers play in the upbringing of both daughters (in my case) and sons.

I decided to Google this topic to see what I could find… the results were interesting and gave quite a bit of information.

In thinking about the above articles and my own experience as a father, I see my daughter (especially my eldest) looking to me to be so many things, from a father figure, to a coach and advocate, to a cheerleader. I also see that she wants me to be her friend. As all of us know, this is not really something that we can do completely while being a parent…but I still try my best.

As I have been blogging, I continually read the challenges that Dads have (at times) in stepping aside from being a friend to their child and instead putting on the disciplinarian hat to maintain order and structure in what can be a pretty harried existence.

So question one for today is how do all of you maintain this balance?

As I read the above articles preparing for this post I was amazed at the statistics showing a marked increase in single fathers raising their children with mothers not in the picture. One Fifth of all single parents out there are single dads equaling about 2 Million. I feel for these Dads, as I don’t know what I would do if J-Mom was no in my life. Not to say that I wouldn’t do my darnedest, but I know my life would be turned upside down and it would be a HUGE transition for us all.

Most of the articles talked about a few specific things that were important for fathers being within families including:

There were many other interesting studies in the above links that referred to the importance of fathers interacting with their children from an early age both emotionally and physically.

So the 2nd question for the day – How do you engage with your children?

The final piece that I thought was interesting was the idea that good fathering begets good fathering especially in boys. While this may seem common sense, the more I think about it, it does seem to make sense. As I mentioned last week about my own father – I learned many positive things and still have to watch some things that I tend to do (that he did also) so that I am engaged and not hooked to my work.

Conversely, I have talked to some Dads tat did not have the best experience of a father role model and when they found out that they were going to be a Dad they were somewhat frightened by the prospect. This is not to say that these Dads turned out to be bad fathers, but it would come to reason that they may have to overcome some issues in regards to self confidence as well as skill base to be able to overcome their past.

Thanks for reading and have a great Manly Monday!

Well…here it is…my first Manly Monday post…I hope that you all may be able to try your own out on your sites as well. As I mentioned in my Maniverse post on Monday… The idea behind Manly Monday is that you talk about what it means to be a man, or a dad, or portrays something manly (in however you define this). This does not mean that you need to be a man to write a post so ladies out there…I encourage you to try this out as well…

Well… for my first post I will talk about my own father. My father was never what you would call the fix-it type of dad… and with that in mind I followed suit… not really being that much of a fix-it Dad myself. I have learned some things over the years but have to be honest and say that I would usually have to ask for help either from others more knowledgeable than I or a professional!

Though I say this, what my father really did teach me was the importance of compassion and of respect toward not only my wife but all women and really all people. My Dad is the type of person that people immediately warm up to and I can only hope that people see me in the same way. He is the type of person that goes out of his way to do things for others, gives back to his community, and works hard for what he wants.

These are all things that I admire and respect in him and try to emulate in my own life. Now of course there are other things that I try not to emulate as well (such as being a work-a-holic) but I probably am more like my Dad in this way than I would like to admit.

Well… for this week I salute my father as being a great example of what it means to be a man and a father… thanks Dad!

Have a GREAT Memorial Day and Manly Monday!

Well… The Maniverse returns… today I will talk a bit about the middle of the night feedings and an idea I have for all of the Dad Bloggers out there for Mondays! You know as I was growing up I never really thought about being a Dad… I don’t even recall ever saying when I was young…I want to be a Dad… I think when I started into College I did start thinking about this and I knew I did want to be a Dad at some point. After 6 years of marriage we were blessed by Diva-J and now Diva-PJ…

I think back to role models as a father…and of course my Dad comes to mind as well as grandfathers… I would say now, I also watch my father-in-law as he parents in a different way than I had seen in the past (in a good way)… but I was unprepared to be a father as I think many of us are.

There are moments though where you know things in the universe are aligned and are right…one of these times is in the middle of the night or close to the middle of the night when as a Dad you are feeding a baby a bottle. When you look into the eyes in a dim lit room so wide and trusting, looking up to you like you have every answer in the world…and at times even talking to you (between bites) in their own way. It is an amazing feeling and one that someone cannot explain until they experience it.

Have any of you Dad’s out there felt the same? Had similar experiences?

Now for my idea…

I have been noticing all of these MEMEs out there for every day of the week and many are pretty generic but there are some devoted only to Moms….so my idea… what about a MEME for us Dads? On Monday I plan to start a posting entitled “Manly Monday”.

My idea behind this day will be that in your post you will talk, post an image, or show something that talks about what it means to be a man, a father, etc. Be creative, tell a story, recount a memory, show a picture of a project… whatever you wish…

So what are your thoughts on this… recently I read something about new blogging…about not starting a new MEME… but I thought I could try… Let me know your thoughts!