Portal Masters be on the lookout this October! Activision Publishing, Inc. is bringing more content and characters to Skylanders® Imaginators– the game lets fans unleash their imaginations like never before in a Skylanders game. Starting today, the villains of Skylands are taking over Gamescom and revealing an all-new dedicated Crash Bandicoot® level, Thumpin’ Wumpa Islands, to fans. Leading the charge is Skylands’ most notorious villain Kaos, who along with the help of new guest star Skylander, Dr. Neo Cortex are sure to add more fun to players’ imagination-to-life gameplay experience. Both supervillains are joining the lineup of Skylanders Sensei characters as fully-playable toys in Skylanders Imaginators, and Kaos will available for free to fans who pre-order and purchase a Skylanders Imaginators starter pack.

“From the moment we received the first fan art, we knew Skylanders was unique in its ability to fuel kids’ imaginations. With Skylanders Imaginators’ powerful character creation tools, we can’t wait to see what amazing Skylanders our fans will bring to life,” said Paul Reiche, president and co-founder, Toys For Bob. “Now fans can create more characters than there are stars in the known universe. These Imaginators join a strong lineup of Sensei characters which include fan-favorite villains, now reformed and fighting for good!” 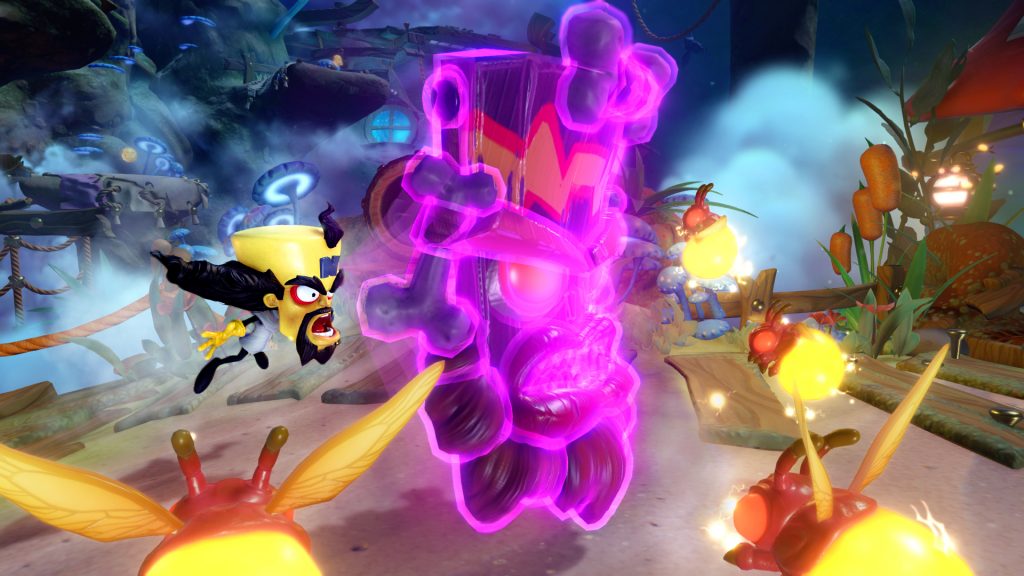 In North America, fans who pre-order and purchase the Skylanders Imaginators Starter Pack will receive a playable Kaos Sensei toy for free while supplies last between October 16 – 22, 2016.

With Kaos having discovered the power of Mind Magic to create Doomlanders, one of his first creations was none other than a clone of himself! Figuring that no one in the universe, including the Skylanders, could ever stand up to more than one Kaos, he unleashed his clone in his quest to take over Skylands. But to Kaos’ surprise, the clone – also being Kaos – wanted victory for himself! As a result, he fights against his creator, in turn helping the Skylanders in their endeavor to defeat the real Kaos!

At Gamescom, Skylanders Imaginators will introduce fans to the return of Dr. Neo Cortex as a Sensei Skylander and reveal an all-new level, Thumpin’ Wumpa Islands, that’s steeped in nostalgic Crash Bandicoot® gameplay. The level includes special Crash Zones that bring back the classic massive boulder chases from the original games. And, as with any Skylanders level, there are secrets and hidden areas all along the way. In paying homage to this iconic character on his 20th anniversary, the level is packed with TNT boxes, crabs, hazards, temple ruins, Wumpa Fruit, exploding crates and many more elements from the original Crash. But it all takes place in the Skylands – which means a new twist of Skylanders combat and action brought into the world of the Wumpa Islands. 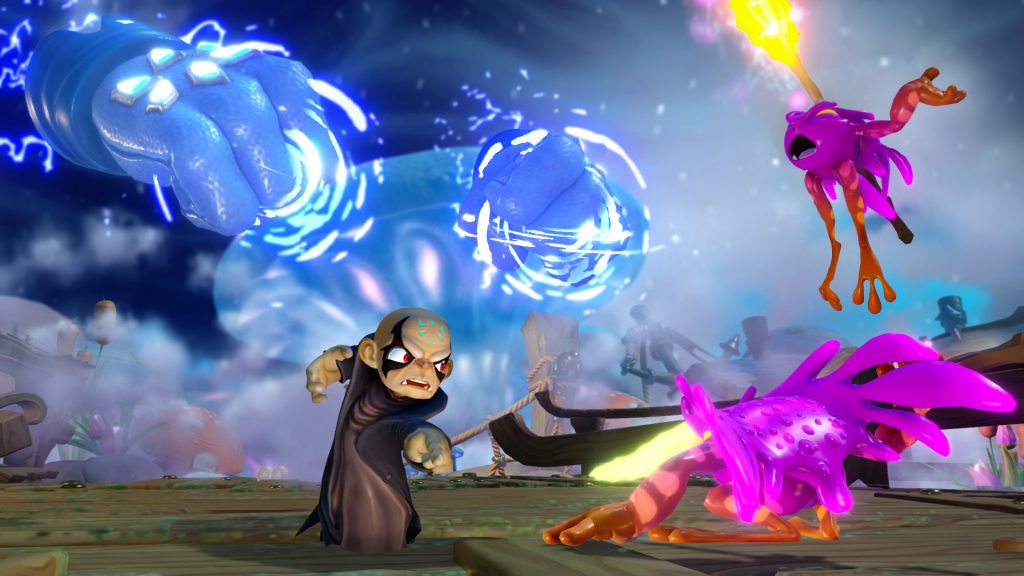 “You can’t have Crash Bandicoot as a guest star Skylander without his arch-nemesis, Dr. Neo Cortex,” said Jen Oneal, studio head, Vicarious Visions. “We approached the level as a way for us to bring the best parts of Skylanders and the best parts of Crash together into one epic adventure. Players are going to enjoy how we’ve honored the heritage of traditional Crash games in the musically-themed, TNT crate-filled level. For fans of Crash this is going to feel like going back to the old world of Crash Bandicoot — but in gorgeous 1080p.”

In the game, a “Synchronization Celebration” has aligned the world of Skylands with the Wumpa Islands. Upon arriving, Spyro and Mags discover that Dr. Neo Cortex (voiced by Lex Lang) has created a terrible machine to harness the rhythmic power of the island’s celebration for his newest evil scheme! When the machine goes awry, something occurs that throws the whole party out of sync. Crash (voiced by Jess Harnell) must team up with the Skylanders and his old enemy Neo Cortex to restore the celebration before the Wumpa Islands are syncopated right out of existence! 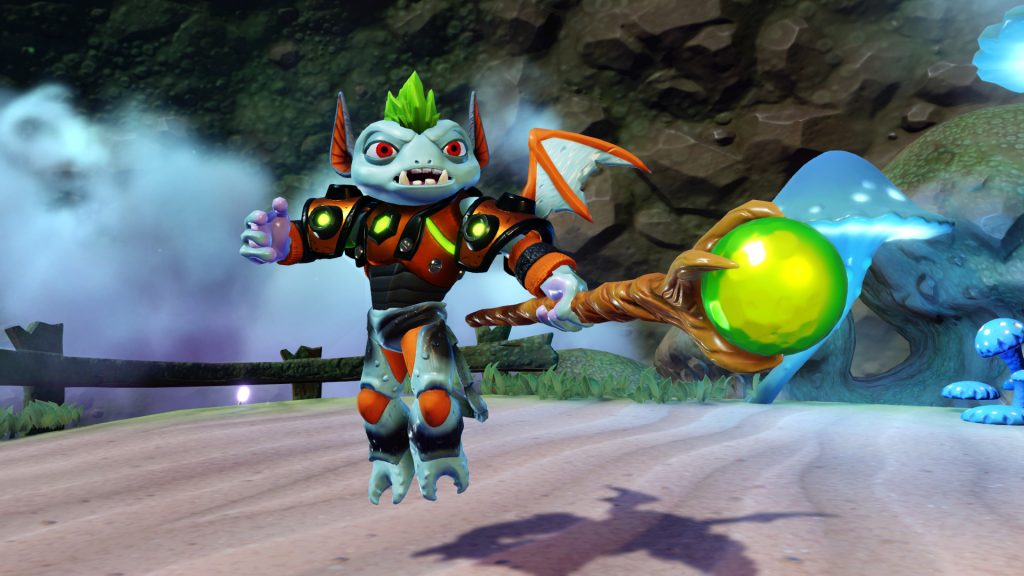 Last but not least, Portal Masters will soon be able to collect Imaginite Mystery Chests. These chests will unlock new creation pieces, such as gear, weapons, and parts for players’ Imaginator characters.

About the Skylanders® Franchise

The award-winning, $3 billion Skylanders® franchise has sold through more than 250 million toys1 since pioneering the toys-to-life category in 2011 with the debut ofSkylanders® Spyro’s Adventure. The game originated a play pattern that seamlessly bridged physical and virtual worlds across multiple platforms. In 2012,Skylanders® Giants further evolved the genre and added LightCore® characters to the collection of interaction figures. Skylanders® SWAP Force™, which launched in 2013, introduced an all new play pattern – swapability. In 2014, Skylanders® Trap Team reversed the magic of bringing toys to life by allowing players to pull characters out of the digital world into the physical world and became the number 1 kids’ console game globally1. Skylanders® SuperChargers launched on September 20, 2015 and expanded upon the franchise’s signature gameplay to introduce vehicles-to-life for the first time. 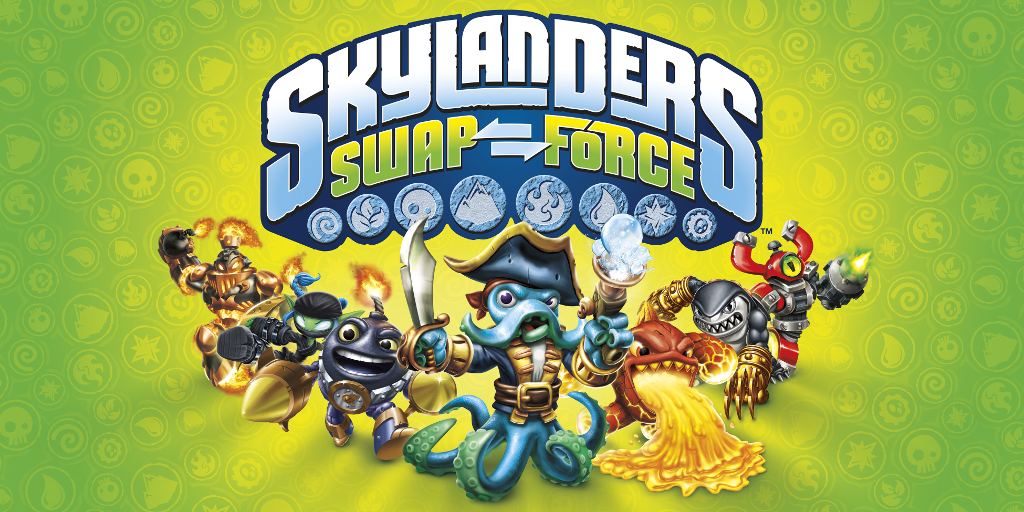 Skylanders is “mixing it up” with the newest game in the award-winning, top-selling franchise.   Skylanders SWAP Force builds upon the success of the franchise’s signature gameplay and collectible toy experience, adding an all-new dimension to the “toys to life” innovation.  The game introduces a compelling play pattern — dynamic swapability — that lets gamers transform 16 SWAP Force inter-action figures into more than 250 unique characters by swapping the top and bottom halves of the toys.  Now, Portal Masters can mix and match characters’ powers and moves and experience an unprecedented level of choice never before seen in a SkylandersTM game.   Fans also can play Skylanders SWAP Force with their entire collection of 100+ characters from Skylanders Spyro’s Adventure® and Skylanders GiantsTM.

Skylanders SWAP Force features new abilities – such as flying, climbing, digging, bouncing, or teleporting – which can be used in previously unexplored areas of Skylands centered on these play mechanics.  Additionally, the game features 16 new core characters, eight new LightCore™ characters and 16 new versions of fan favorite Skylanders from previous games.  Now kids will have more than 100 characters from which to choose. The game’s highesolution graphics brings detailed characters and richer environments to life, immersing players in the game like never before.

In Skylanders SWAP Force, Portal Masters embark on an all new adventure in the mysterious Cloudbreak Islands, home to a mystical volcano that erupts every hundred years to replenish the magic in Skylands.  During an epic battle, a brave group of Skylanders were caught in the volcano’s eruption, which blasted them apart and sent them to earth.  But, the magic of the volcano gave these heroes a remarkable new power — the ability to swap halves – turning them into a special team known as the SWAP Force.  Meanwhile, Kaos is back with a new evil plan.  And now, Portal Masters everywhere must reassemble the SWAP Force — in their original form or in new combinations — and send them back to Cloudbreak to save Skylands! 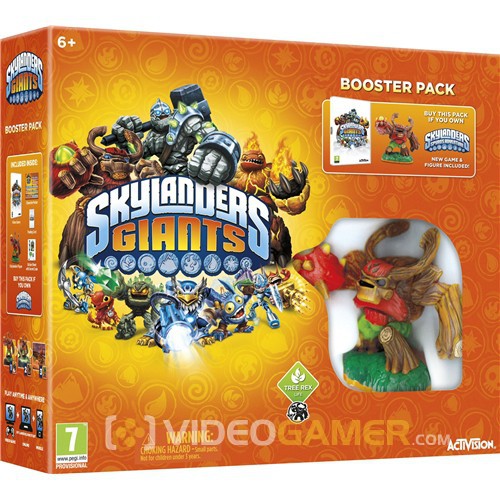 I have been a fan of the Skylanders game ever since it came out last year. I find my daughter and I having a blast every time that we put it on, so you can guess that I was very excited about the new Skylanders Giants game that was scheduled to come out last month! In this game the evil Portal Master Kaos comes back to provide a brand new adventure. In Skylanders Giants, they prove that that bigger really is better as the Giants characters can do so many amazing things that the regular size characters cannot.

The sequel to the best-selling kids title in 2011 and best-selling game of 2012 year to date*, Skylanders Giants, from Activision Publishing, Inc., a subsidiary of Activision Blizzard, Inc. [Nasdaq: ATVI], has already received endorsements from the Toys“R”Us® Holiday Hot Toy List, the Toy Insider “Hot 20 Toys for the Holidays” and Time To Play’s “Holiday 2012 Most Wanted List”. 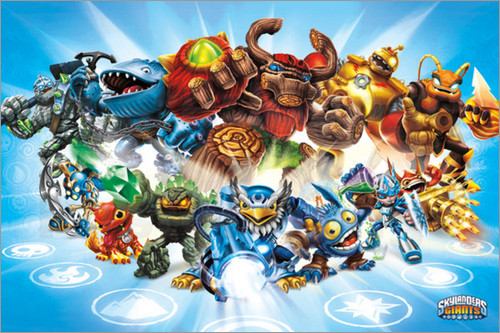 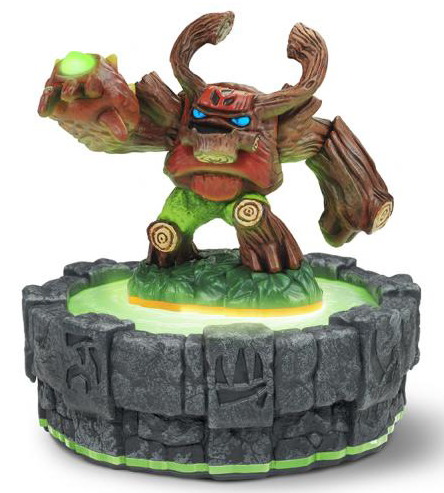 “It’s really gratifying that in less than a year, we’ve seen Skylanders go from being an intriguing untested new IP to becoming one of the hottest kids franchises in the world. And it has been universally acclaimed by parents, kids and critics alike,” said Eric Hirshberg, CEO of Activision Publishing. “Skylanders is more than just a new piece of interactive entertainment, but a genuinely new kind of thinking in interactive entertainment. The response of the fans has been incredible, and the only way we can return the favor is with a sequel like Skylanders Giants. This game is all about big: big creatures, big worlds, bigger ideas. We’re very excited to see Skylanders Giants finally hit the shelves.” Skylanders Giants will leap to Wii U™ day and date with the launch of Nintendo’s new console on November 18, 2012. In the Wii U version, the game takes clever advantage of the system’s motion and touchscreen controls. Meanwhile, Nintendo 3DS owners will experience a new adventure exclusive to this version. The storyline features fan-favorites Flynn, Hugo and Cali, and introduces the villainous Captain Frightbeard.

Skylanders Giants is rated E+10 by the ESRB. For more information, visit www.skylanders.com