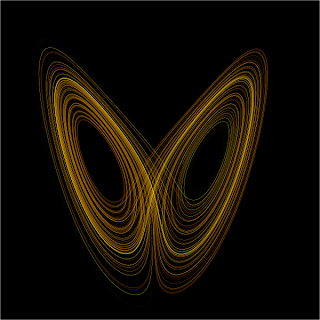 Back in graduate school I learned about a theory called Chaos Theory that talks about the idea of a rippling effect that occurs throughout life As one of the analogies (Called the Butterfly Effect) goes, a butterfly flapping its wings in New York can cause a Tsunami in Indonesia. Wikipedia does a good job at explaining this and its integral parts. (I talked about this theory a while back as well)

I bring up this theory as I have found that this theory explains much in my life as a parent and as a father. One of the main pieces of this theory talks about the fact that patterns seem to repeat. Look at the picture of the fractal fern and the Lorenz attractor. Both of these images show how patterns in mathematics and in nature repeat themselves.

As a father I see parents like myself having these similar routines and patterns that become innate in our lives. In my household, I tend to have the same bedtime routine I use with my eldest and when that changes she is not always the happiest camper. This is only one example, but there are many others that happen even on a daily basis. 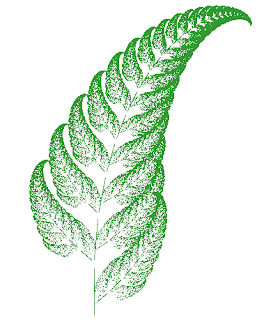 One other concept with this theory is the ideas of the rippling effect. I am amazed at how hard these small aspects of life can be identified, even after some time. There are times where the small things we do have an immediate impact, while there are other times where you simply do not know what the outcome will be because they may not manifest themselves into much later in life.

Think to the things you say and do with your children on a daily basis. We do small things that may have a direct impact, but there are others that are forming who our children are and will be for the future as they may be invisible or unconscious at the time of occurrence.

Most people would think of chaos as being negative, or in a parenting construct, as completely losing control. The more though that you read about chaos theory, the one you will come to understand that losing control is not a bad thing and instead should be looked at as being something that you want within your home and within your life (now your kids and significant other may think that you have lost it when you propose this).

So I encourage all of you to have a little chaos in your lives and work to encourage this in your own way. This theory transcends into many aspects of our lives, so read more about it and find ways to incorporate chaos into your life!

Are you interested in learning more? If so, check out the below links:

I sometimes think of the paths that we all choose and how with a small tweak, or a different decision our current lives could have easily been very different than they are today. Have any of you ever thought of this as well?

I also was just reading something this week about chaos theory, an interesting idea…that partially the small things that you and I do make large impacts on very small things. What are called butterfly effects… or rather, what the theory states is that the flapping of a butterfly wing in let’s say china can effect the weather in New York City… like I said it is a bit out there, but an interesting concept. This is only part of the theory, but it may be something that you may want to look into when you have the chance.

Happy musings to you all!