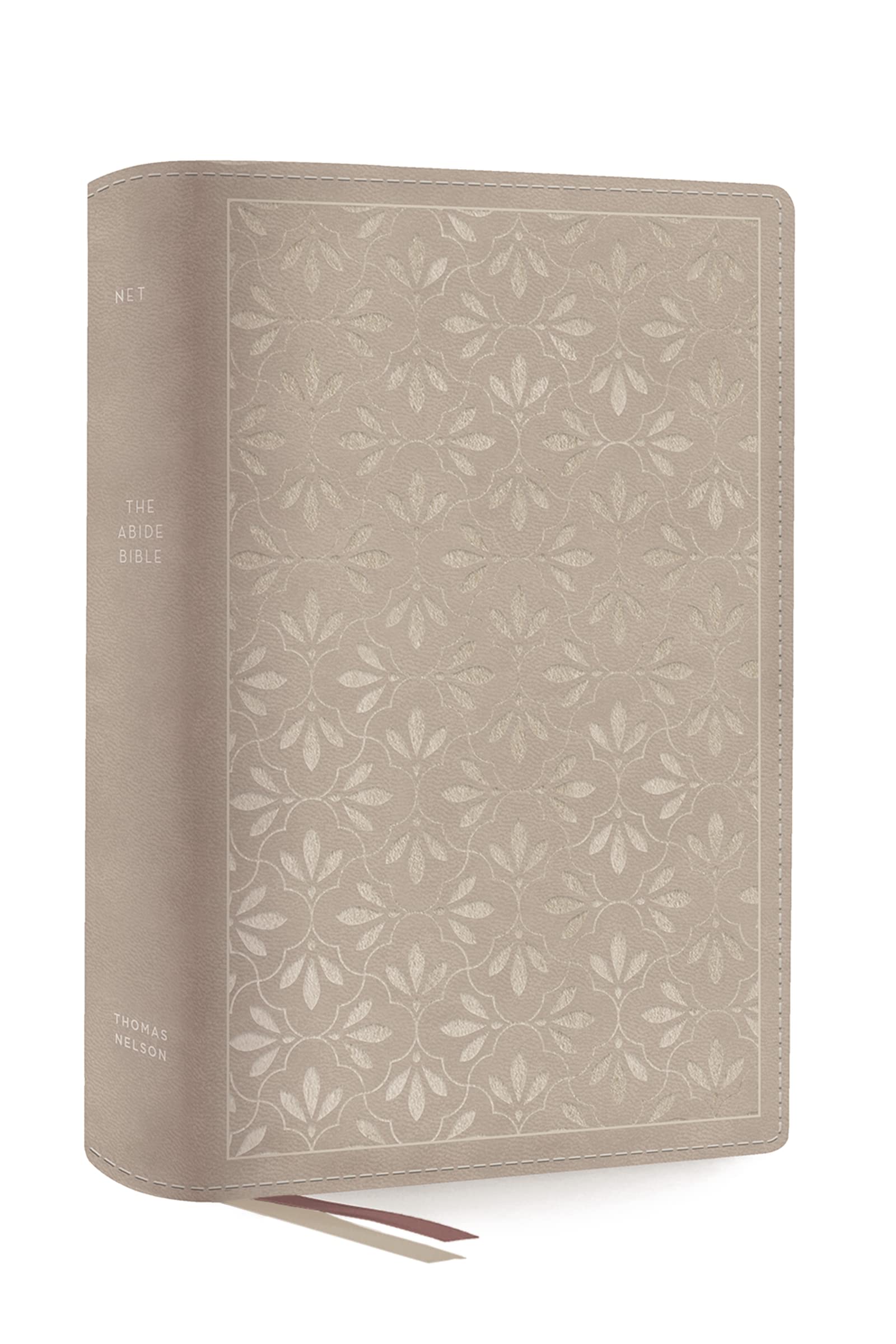 Many thanks to Thomas Nelson Bibles for providing a sample of the product for this
review. Opinions are 100% my own and NOT influenced by monetary compensation.

Do you yearn for life-giving, intimate communion with God? The Abide Bible is designed to help you experience the peace, hope, and growth that comes from encountering the voice and presence of God in Scripture. Every feature in Abide is designed to teach and develop Scripture-engagement habits that help you know the power and spiritual nourishment of abiding in Christ. 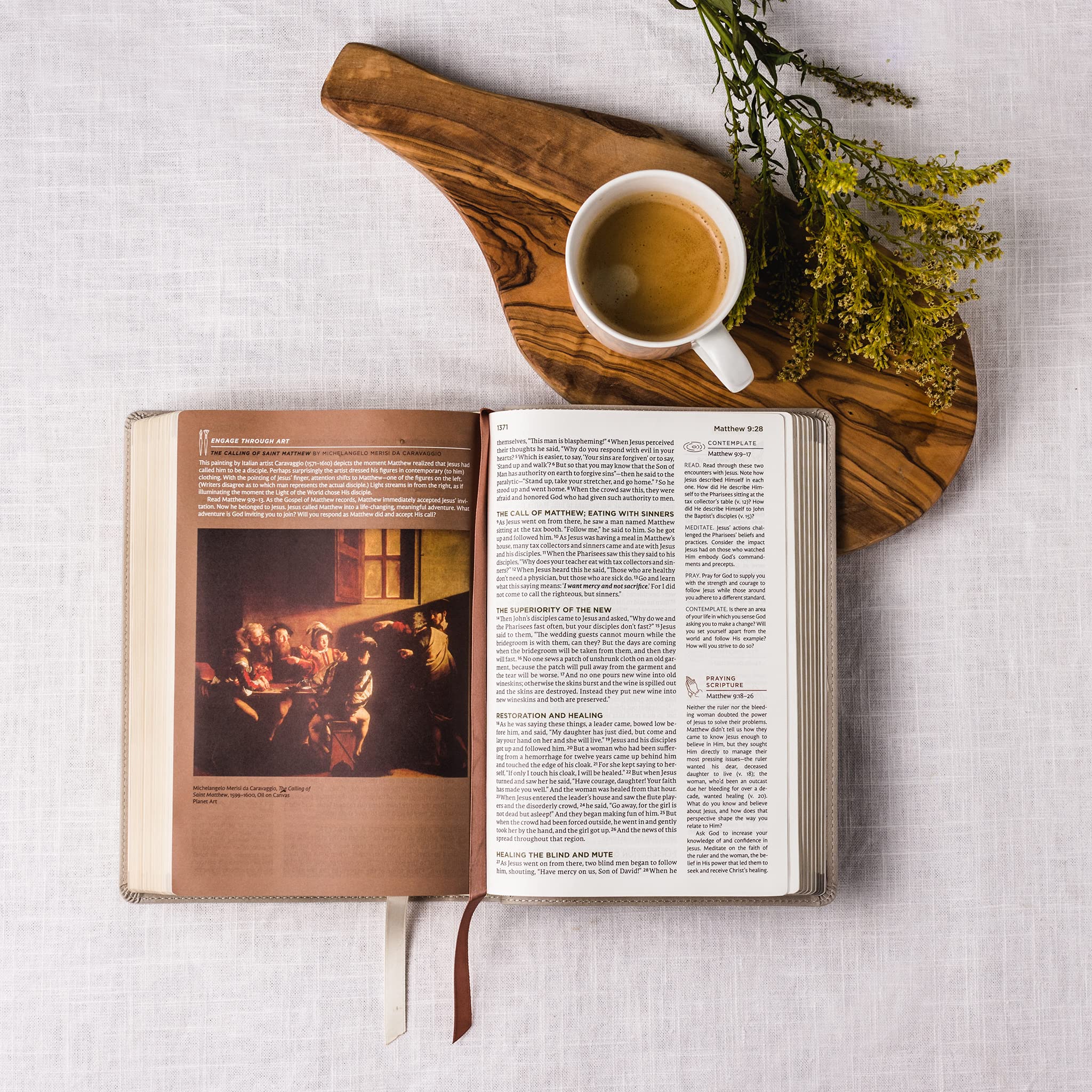 Created in partnership with Bible Gateway and the Taylor University Center for Scripture Engagement, The Abide Bible’s features include articles, book introductions, and practical Scripture engagement prompts based on five ways of engaging deeply with the Bible: 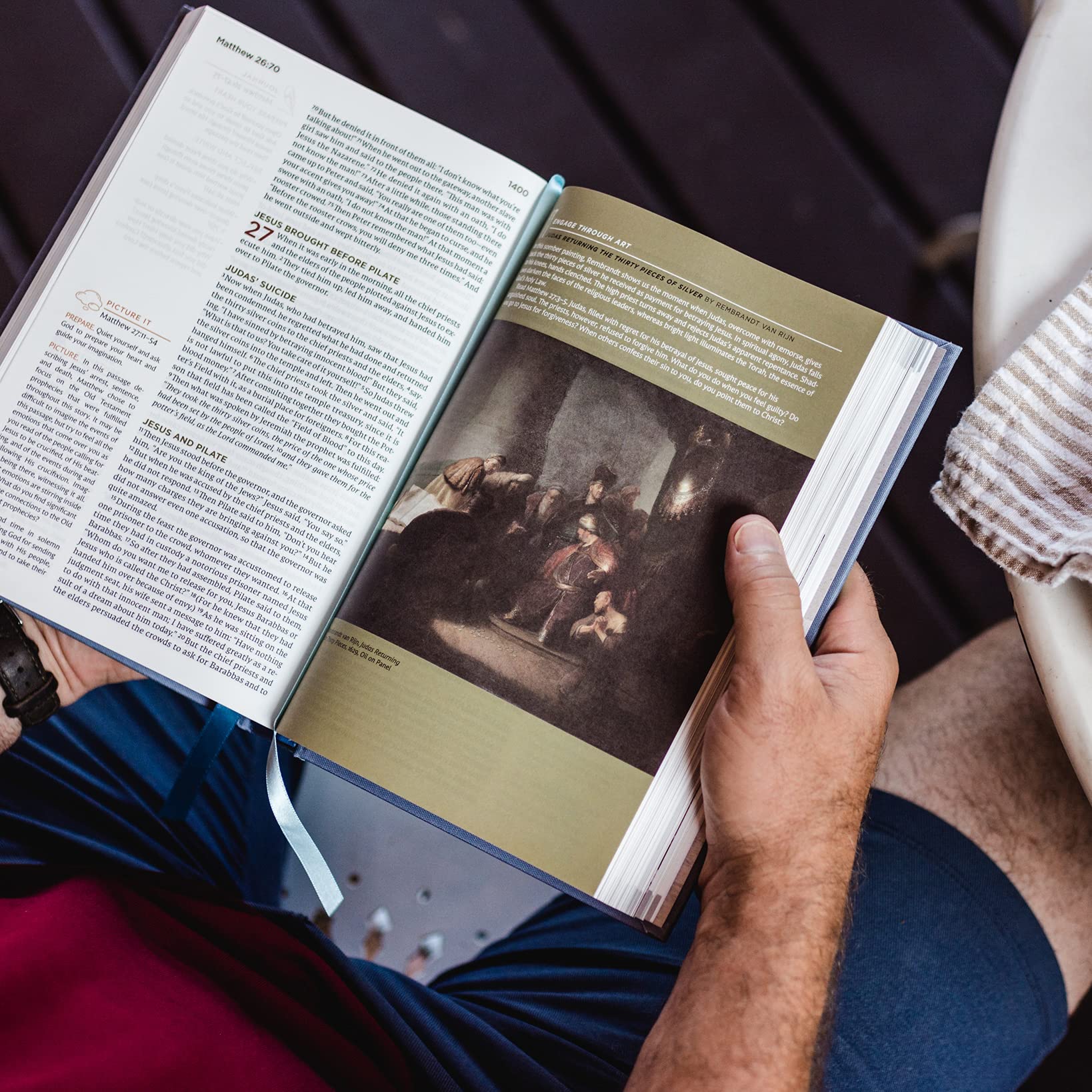 Find the Abide Bible on Amazon!

My Take on the Bible

This is a great bible. As someone that has read other Bibles before, this Bible was a great one that I’m loving this bible makes it easy to study the word of God. The Bible really leads you through a guided study through scripture and helps you to engage with the words in numerous ways. As you read this Bible you will find that nothing gets lost. You will find that it is easy to understand, especially due to the notes on the side of the page and the additional comments that make it easier to comprehend. 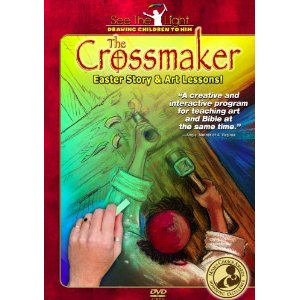 About the DVD
Explore The Bible Through Interactive Art |

‹ ›
. Meet Dominic, the son of a carpenter, who finds himself drawn into the unforgettable trial of the man called Jesus. Share in this amazing adventure that takes Dominic from Christ’s crucifixion to a place of redemption, and a face-to-face meeting with the risen Christ! See The Light chalk artist Gloria Kohlmann draws her stunning interpretation of the Easter Story.

‹ ›
: ART LESSONS! [1] GLORY! See The Light artist Heidi Shorts teaches on the art of Creative Lettering. [2] He Is Not Here! He Is Risen! See The Light Art Club Master Teacher Pat Knepley leads budding young artists in a step-by-step drawing lesson using chalk pastels. Plus, create your own black light reveal! [3] Three Crosses On A Hill. See The Light’s Jim Pence gives a tutorial in water colors as young artists discover The Joy of Art.

WATCH AND HEAR the plan of salvation, clearly and creatively presented as you have never seen it. HEAR See The Light chalk artist Gloria Kohlmann’s commentary as you watch the Easter scene being created. MEET the See The Light team. Run Time 150 mins.

[amazon_enhanced asin=”B004N93F3S” /]My Take on the DVD
This DVD provides the viewer an amazing Easter story for all to view. Over the years I have seen many renditions of this story, but this is the first unique one that I have seen that I have wanted to watch over and over. What was different in this DVD was the incorporation of artistic impression throughout the DVD.

This DVD was infused with beautiful chalk art that you do not usually see. My girls loved watching this DVD and asked many questions after watching it and I was happy to watch it with them and be able to answer their questions.
Outside of the DVD itself were wonderful art lessons that provide step-by-step instruction in using chalk pastels, creative lettering and using water colors. These lessons combine spirituality and the bible with art and the lessons were very easy to follow and learn from.
I highly recommend this DVD to all!

How would you like to win a copy of this DVD? All you need to do is visit the following website http://www.SeeTheLightShine.com and tell me one thing that you like about the site. The contest will run for one week and will end on April 4, 2011.
Bonus Entries 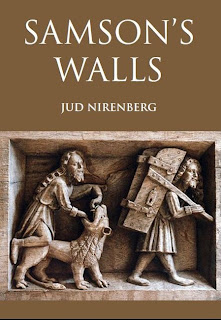 I was recently asked to review a new novel by author Jud Nirenberg named Samson’s Walls.

In this novel Mr. Nirenberg takes the story of the Samson from the Bible to a new level, letting the story take life much more than I would have thought when I first heard of the novel.

Prior to receiving the novel, I did a bit of research on the story itself and found that the story revolves around the story of Samson. But is also examines the society that he was born in, raised and tempted within.

As the publisher states:

In a Canaan where Philistines and Hebrews vie for dominance, it is important to know one’s place. Samson is isolated in his, trapped by unusual rules and expectations. He was promised to his parents by an angel, destined to grow into a great man and make his people strong. Raised with Philistines for playmates, he aches to be a part of their world. At marrying age, he chooses a Philistine wife. When his new family denies him the acceptance he craves, he releases years of frustration and loneliness in blood.

Samson goes into hiding, seeking to make peace with his wife’s people. Other young Hebrews soon join him, each with their own reasons for rebellion. Even while longing for peace, Samson leads this growing army. He is trapped by his successes and grows in fame and power, taking enemy territory. He is alone.
He tastes love when he meets Delilah, the unlikely prostitute-queen of a village in no-man’s land. She is the opposite of the clannish divisions he hates, with unclear ethnic origins and leading a mixed community. They become intimate as Philistine spies gather around them. Samson and Delilah are ensnared in Samson’s fight to fulfill his own heart’s need despite his tribe’s and God’s expectations.

Not to say that I know a lot about the story of Samson and Delilah outside of the basics, but this story explodes the story that I knew wide open. The author does take some leeway in the story by naming Samson’s mother, but he states this up front for the reader to understand. He also does base his novel in some fact as well. Thus, it sometimes is hard to determine what is fact and what is fiction, which is the trademark of a good novel.

Once I started reading the novel itself I can honestly say that it was intriguing and it did draw me in, even more that I would have expected. I decided to try and ask the author a few questions to get some more information on his motivation for writing this book as well as a few other questions including:

1) What led you to have an interest in Samson and in writing about his life?

If you find the intersection of theology and history interesting, then Samson’s story is a fascinating section of the Bible. Its themes would have been common in the Mideast of its time but are shocking to readers, especially in the Western world, today. After all, it’s about people mass murder and burning animals and people alive. God encourages tribalism, or at least the people in the story interpret His will that way. Part of the pleasure of planning and writing the book was the research on 13th century B.C. Canaan and part was the exploration of the messages buried within the story.

And not least of all, there’s the matter of psychology. I wanted to make some sense of all the violence and loneliness and to make sense of all the irrational behavior of the Biblical telling of Samson. A man visits a prostitute and she wants to tie him up. He agrees. She calls in his enemies to kill him. He escapes. Then he goes back to her and lets her tie him up again. And again. What’s going on here? Turning the story into something with real people whose motives make sense to us was an exciting challenge.

2) What type of parallels do you see in the society that Samson lived within and in today’s society?

People who read Samson’s Walls will be able to relate to someone in the story. The characters live in a very different society from ours but human needs are the same. We want to be loved, to fit somewhere, to trust someone. We can feel torn between the expectations of others – of our culture, our family, of what we believe God wants – and what we deeply wish.

3) What do you hope that your readers will take from this book?

We’re all tied together by our commonalities. War and violence don’t have winners and losers. We’re bound together and share our fates with those who are connected to us, even those connected to us by accident or by animosity. Samson’s story is tragic because he seems fascinated with his enemies but this never leads to a peaceful relationship.

I think the power dynamic between the men and women in the book, and especially between Samson and Delilah ought to get a lot of readers talking.

4) How much of your novel is based on fact and how much is fiction?

A lot of research went into giving the reader a historically coherent picture of the setting, its cultural and political conflicts and the lifestyles. In that sense, it’s aimed at showing fact. As for the story itself, I’d say I aimed for fidelity to an original. I tried to write a novel that is faithful to the Biblical version, building on it without deviating from its shape. This makes Samson’s Walls very different from other novels about the same people. I didn’t just change the plot without respect for the Bible. The last well known novel about Samson inspired a Cecil B. DeMille film that took extreme liberties. Samson’s Walls is an attempt at greater fidelity.

I found it interesting to find out while researching this book that the novel is now in pre-production as an opera, to be initially performed in 2010 in Washington, DC. Music is being composed by Gregg Martin, with Nirenberg consulting on the libretto. See http://www.greggmartin.net/ for more information.

The featured product in this post was provided to me free of charge by the author. All opinions expressed in this review are my own and not influenced in any way by the company. Please refer to this site’s Terms of Use for more information.