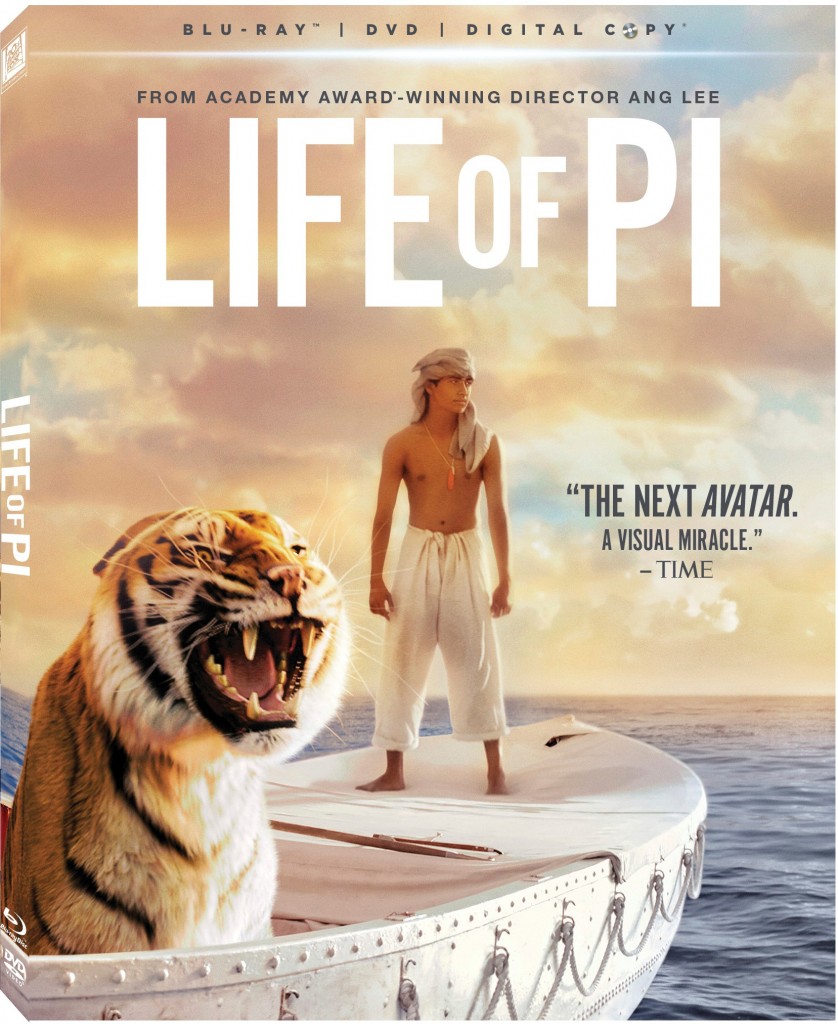 Believe the unbelievable.  Twentieth Century Fox Home Entertainment presents a groundbreaking cinematic experience you will have to see to believe when LIFE OF PI debuts on stunning Bluay 3D, Bluay and DVD from March 8 internationally and on March 12 in North America. Based on the acclaimed best-selling novel from Yann Martel that has been published in 40 languages, and brought to life by visionary Academy Award winning director Ang Lee (Brokeback Mountain, Crouching Tiger, Hidden Dragon), this magical adventure of hope, wonder, survival, and the power of the human spirit has been celebrated by critics all over the world.

A “magnificent and moving” (Peter Travers, Rolling Stone) motion picture event that has been hailed as “a masterpiece” (Betsy Sharkey, Los Angeles Times), taking in over $500 million in worldwide box office.  LIFE OF PI follows Pi Patel, a young man on a fateful voyage who, after a spectacular disaster, is marooned on a lifeboat with the only other survivor, a fearsome 450 lb Bengal Tiger named Richard Parker. Hurtled into an epic journey of adventure and discovery Pi and his majestic companion make an amazing and unexpected connection.

With incredible cinematography from Oscar nominee Claudio Miranda** (The Curious Case of
Benjamin Button, Tron: Legacy) and masterful performances from newcomer Suraj Sharma,
Irrfan Khan (The Amazing Spider-Man, Slumdog Millionaire), Rafe Spall (Prometheus, Anonymous) and Gerard Depardieu (Paris, je t’aime, City of Ghosts), the LIFE OF PI Bluay 3D is loaded with over two hours of behind-the-scenes special features, including deleted scenes that will make you rethink the story (also presented in 3D), five featurettes that dive into the making of the visual spectacle, 60 pieces of inspirational artwork, storyboards and more.  Prebook is February 13.

Other Life Changing Journeys in Film

A “magnificent and moving” (Peter Travers, Rolling Stone) motion picture event that has been hailed as “a masterpiece” (Betsy Sharkey, Los Angeles Times), taking in over $500 million in worldwide box office.  LIFE OF PI follows Pi Patel, a young man on a fateful voyage who, after a spectacular disaster, is marooned on a lifeboat with the only other survivor, a fearsome 450 lb Bengal Tiger named Richard Parker. Hurtled into an epic journey of adventure and discovery Pi and his majestic companion make an amazing and unexpected connection.

Pi experiences an incredible adventure out on the open waters that forever affects his life. Here we’ll count down the Top 10 journeys in film that changed the characters’ lives, including Seven Years in Tibet, The Lord of the Rings and Into the Wild.

Having grown up in Wayne Manor, where every need was catered for, Bruce Wayne’s life changed irrevocably when his parents were murdered. Unable to live with the pain Bruce ran away from Gotham and began a journey that would take him across continents and eventually to the training ground of ‘The League of Shadows’. This journey certainly changed Bruce’s life forever, forcing him to face his deepest fears. Initially keen to join the league, Bruce soon became wary of their motives and ended up returning to Gotham to create his alter ego, Batman.

Austrian Heinrich Harrer (Brad Pitt) was a skiing champion and passionate climber who decided to climb Nanga Parbat in British India. When WWII broke out, Harrer and his team were arrested and lodged in Dehra Dun’s P.O.W. Camp. He successfully escaped along with Peter Aufschnaiter (David Thewlis), and they ended up in the holy city of Lhasa where Harrer befriended the Dalai Lama. He settled into this strange new way of life and he and the Dalai Lama became firm friends, but nothing prepared him for the devastation which descended when Communist China decided to attack. This true story depicts a life turned around and takes the audience on a journey they will never forget.

This animated film is probably not one that you expected to see in this list. However, when audiences met WALL-E in 2008 they were taken on an emotional journey which they didn’t expect. Even though he was only a small waste collecting robot, WALL-E’s journey to save his beloved EVE not only changed his life but ultimately decided the fate of mankind.

Charles Sanford Babbit is a self-centered Los Angeles-based automobile dealer at war with his own life. When he learns that his estranged father died and left his $3 million fortune to Raymond, his unknown autistic brother, he goes in search of him. When he finds Raymond, he kidnaps him and takes him on an eventful trip to the West Coast as a threat to get the $3 million inheritance. Their trip almost drives Charlie insane but by the time they arrive in L.A. their bond is unbreakable. This crazy journey that changed Charlie’s life forever earned Rainman 4 Oscars in 1988 and is viewed as one of Tom Cruise’s best performances.

Danny Boyle’s cult-classic tells the story of twenty-something Richard as he travels to Thailand where he finds himself in possession of a strange map. It’s rumoured that the map leads to a solitary beach paradise. Excited and intrigued, he sets out to find it. When Richard finds this idyllic paradise he thinks his journey is at an end, but little does he know that it has only just begun. This journey of self-discovery teaches Richard lessons that he will never forget and changes his life forever.

Another surprise entry in the top-ten is Little Miss Sunshine. This quirky comedy starring Steve Carrell and Toni Collete follows a family determined to get their young daughter Olive (Abigail Breslin) into the finals of a beauty pageant. As they travel across the country in their VW bus experience adventures and challenges which bring this warring family together. Dealing with everything from heart-break to drug-addicted pensioners this unique story  won two Oscars in 2007m including Best Original Screenplay, and remains a hit among film-fans worldwide.

This dramatization of the motorcycle road trip Che Guevara went on in his youth was directed by Walter Salles and depicts the journey that transformed the life of this iconic figure. This epic journey filled with ups and downs in equal measure has become a must-see for film-lovers across the globe and shows how one journey can not only change one man’s life, but create a political icon whose life changed a nation.

Into the Wild was directed by Sean Penn and was released to critical acclaim in 2007. Christopher McCandless (Emile Hirsch) is a grade-A student and athlete at Emory University with his entire life ahead of him. When he decides to abandon his possessions and gives his entire $24,000 savings account to charity so that he can hitchhike to Alaska, it comes as a shock to everyone. Along the way, Christopher encounters a series of characters that shape his life and change the way he thinks. Into the Wild is a powerful film which takes viewers on an emotional and touching journey as they share Christopher’s life-changing experience.

LORD OF THE RINGS

Peter Jackson’s Lord of the Rings trilogy made movie history when they were released between 2001-2003. The films were critically acclaimed, winning 17 Oscars in total, as well as wide praise for the cast and innovative special effects. Set in Middle-earth, the three films follow the young Hobbit Frodo Baggins (Elijah Wood) as he and a mismatched group embark on a quest to destroy the One Ring, and thus ensure the destruction of the dark Lord Sauron. This epic journey changed the lives of every character involved and remains the highest grossing movie trilogy of all time.

Tom Hanks played Chuck Noland in this tale of a modern-day Robinson Crusoe. When Noland, a FedEx executive, crash lands on a deserted island he must transform himself physically and emotionally to survive. Directed by Robert Zemeckis, Cast Away depicts the immense challenge ahead of Chuck as he engages in a battle of wits with himself and is tested mentally, physically and emotionally in order to survive.

How would you like to win a copy of this Blu-Ray for yourself or for your family? All you need to do is fill out the below form to be entered.  The contest will run for one week and will end on March 12, 2013.