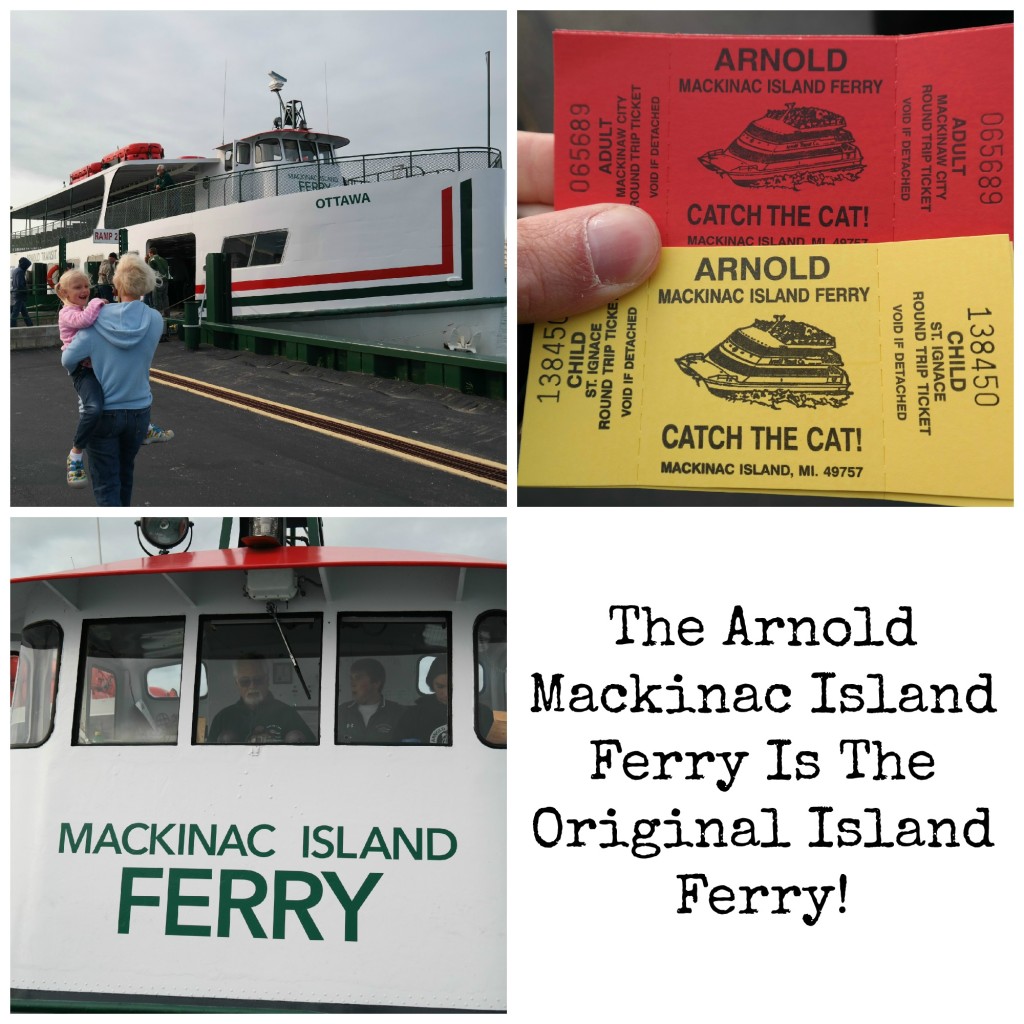 Over our vacation this past week we decided to take our kids for their first trip to Mackinac Island. If you have never been to this island, it is the only place in Michigan that has held back from allowing motorized vehicles on the island. To get to the Island, you have to take a ferry or fly onto the island. There are three ferry companies that can bring you to the island. Each is a bit different, and we chose to use the Arnold Mackinac Island Ferry, the original ferry company that runs to the island. This company has been in existence in some fashion since 1878, talk about a long history. The ride itself took us about 45 minutes to get to the island and it was a comfortable ride. You can sit either on the inside or outside. We chose to sit on the inside as it was chilly, especially in the morning, though we did go outside a few times to get some of the pictures that you see here. It was so much fun seeing the island getting larger and larger as you got closer and closer to the island itself. You can gauge your passage toward the island while you are watching the Grand Hotel, the most identifiable building on the island, getting closer and closer. For me, one of the other things that I love watching for is the Round Island Lighthouse, as this is one of my favorite lighthouses in Michigan. 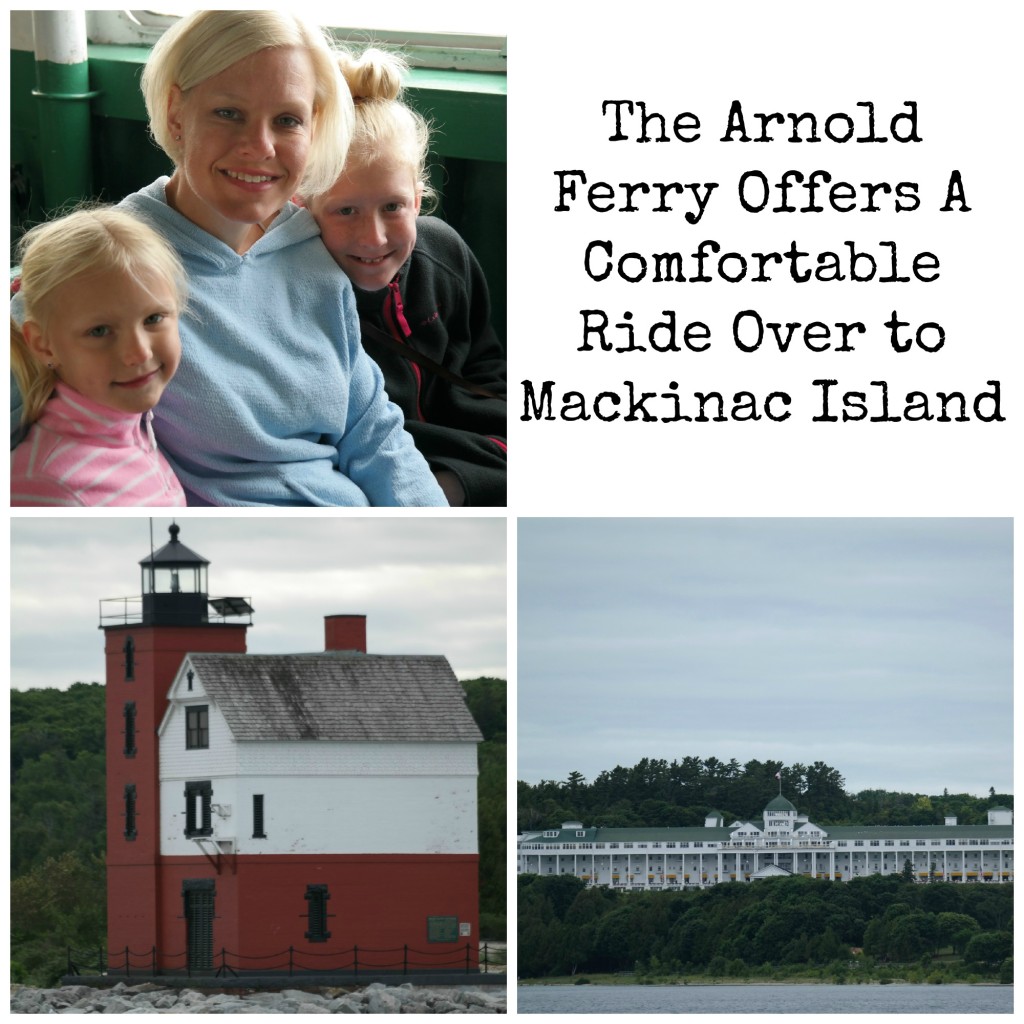 When you get off of the ferry you exit right onto Main Street and close to Fort Mackinac. You start to see the history in action with horse and carriage taking everything from people to hotels, to trash off the island. We ended up deciding to go first to Fort Mackinac. Fort Mackinac is a Fort that has a long history on the island. The Fort first came to the island in 1779. While the fort first was controlled by the British, the Americans took control of the fort in 1796, but the British came back in 1812. The Americans did not take control of the fort again until 1815 and it remained staffed with a garrison of troops until 1895 when it was turned over to the State of Michigan and it was turned into a State Park to maintain the History of our State. Over the years people did visit the fort and learn much about the history of the fort and our State, but in 1958 a large scale restoration commenced. 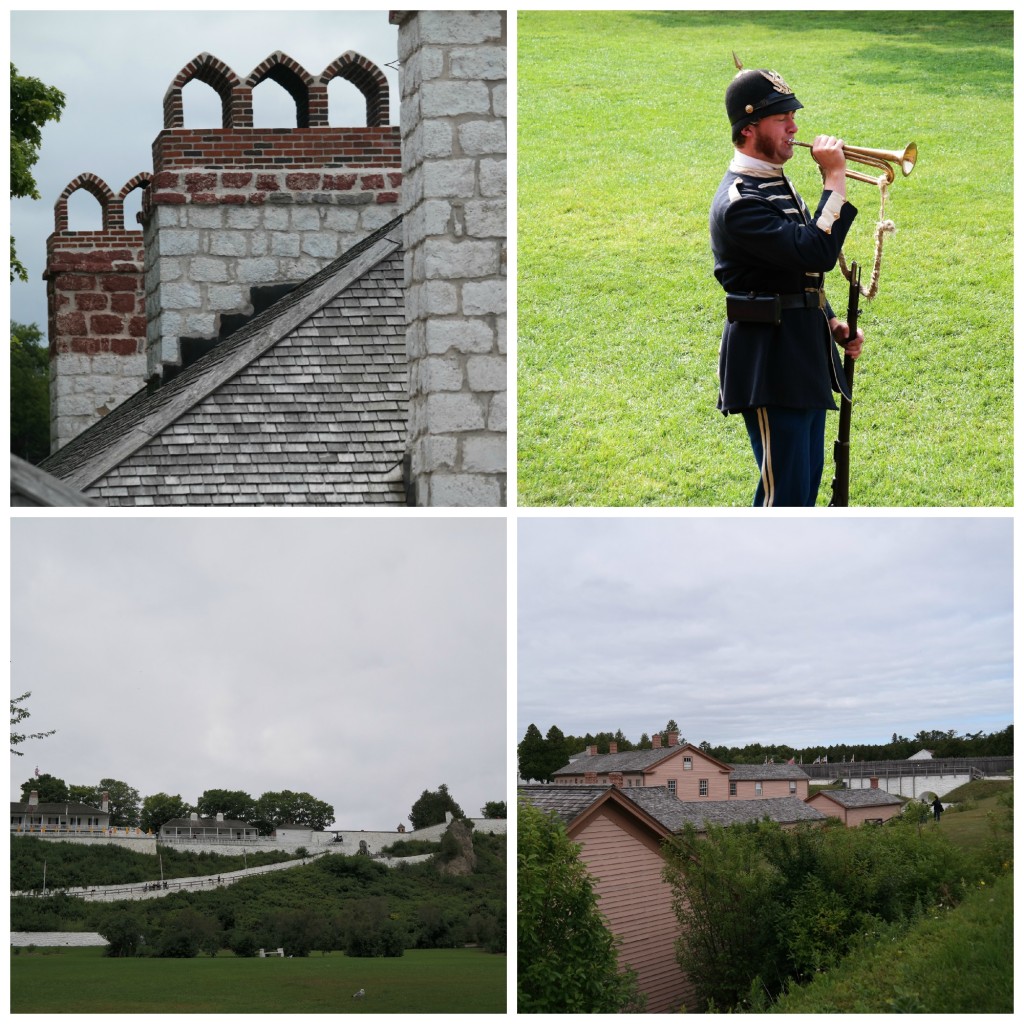 Today, visitors can get a great sense of what soldiers would have had to deal with while garrisoned at the Fort. You can tell that there was definitely hardships for many years and in reading about the fort and the soldiers, you also learn that for some time there were problems with sickness and disease too. You also see some of the more modern conveniences that were added to the fort over the years such as a bath house and modern toilets. At the same time you get to see soldiers re-enacting some of the day-to-day activities that soldiers would have experienced. At different points during the day you can see a cannon and muskets being fired. I was surprised to see that the muskets were MUCH louder than the cannon itself. 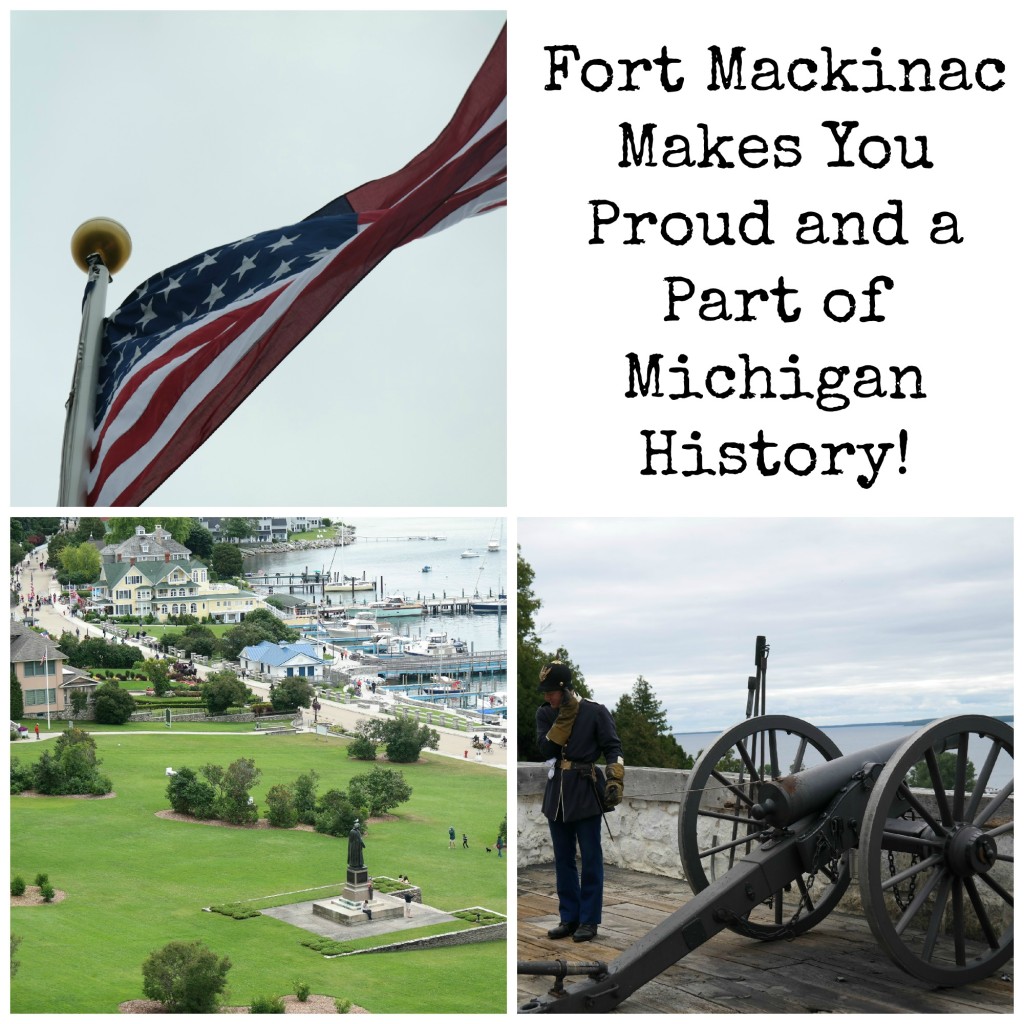 My whole family learned so much as we went from building to building and as we interacted with staff itself. They loved being able to get up close and personal with the muskets and seeing the bugler playing a few of the daily calls that soldiers would have heard. The Fort is also so well situated on the bluff over the city. You can see everything from the fort, which makes the Fort well situated to guard against attack, at least from that side of the island. There also were a number of other great historical businesses, churches and more that you can explore with your entrance fee. So much history is found on the island, and you and your whole family will learn so much about Michigan History that by the end of the day you will be on your way to becoming a Michigan History expert, which was perfect for my oldest daughter who will be going into 4th grade and I know that this will be the year that they will be having a large unit on Michigan History and I just gave her a jump-start! 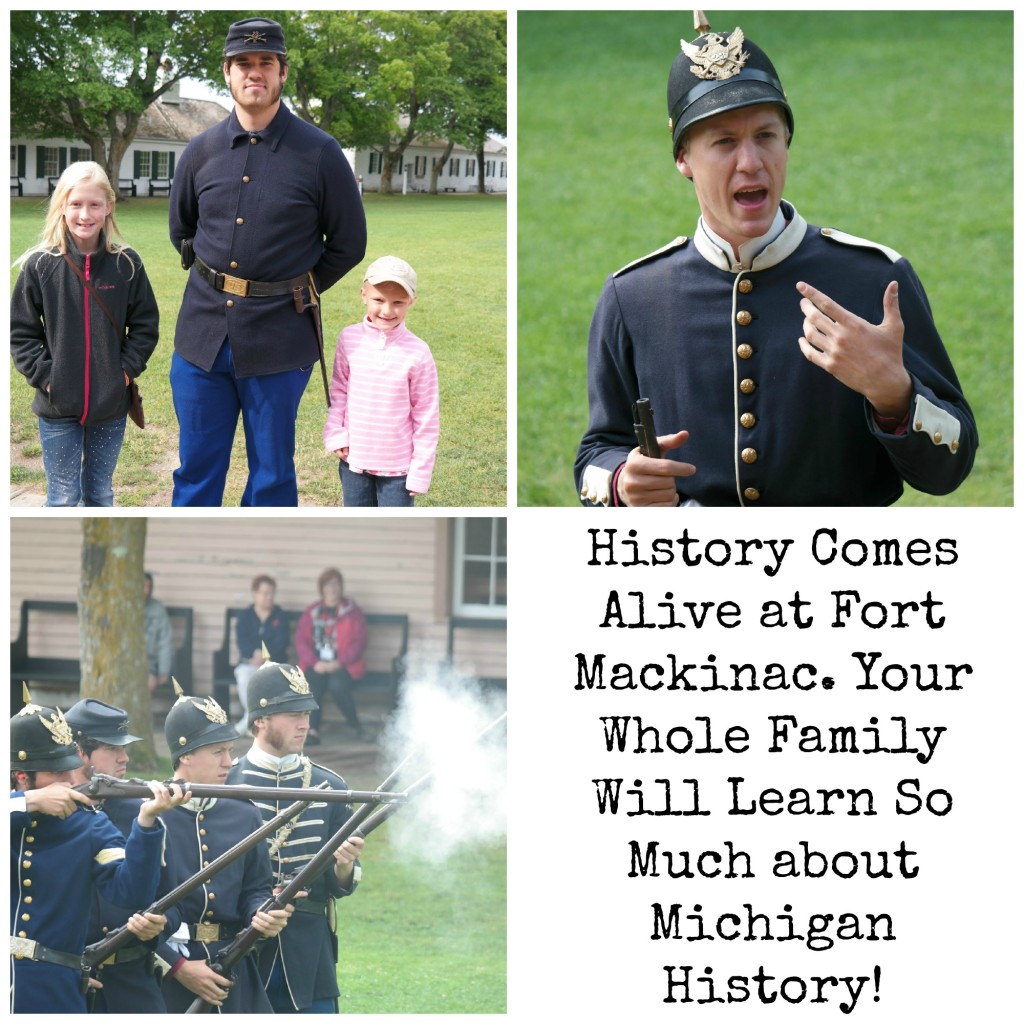 When we left the Fort, we decided to walk down the main drag out of town toward Mission Point. When we got to Mission Point we stopped at the Mission Point resort and met with the Manager of the resort Bradley McCallum to learn more about the resort. Let me tell you, I am in awe at the history this resort has, as I had no clue walking into it prior to this. The initial people who started Mission Point were Missionaries back in the early 1820’s. These early missionaries were there to try and teach the ways of the church to the indigenous people of the island. The missionaries stayed for many years, creating the Mission Church and Mission House which still stand today. After the missionaries left and after some years the facility was changed and it became a part of the The Moral Re-Armament effort with Dr. Frank Buchman at the helm.

This organization became an international company/effort and they used the retreat on Mackinac Island to push forward their beliefs and views. They expanded the site to have a theatre and sound recording studio (the studio was used in the creation of some of the sets and recording of the movie Somewhere in Time) as well as the main lodge. I came to learn that the wood and beams as well as rock that you see in the main lodge were all Michigan based. I have to say that this impressed me, as it definitely showed Dr. Frank Buchman’s commitment to Michigan and to supporting the Michigan economy. 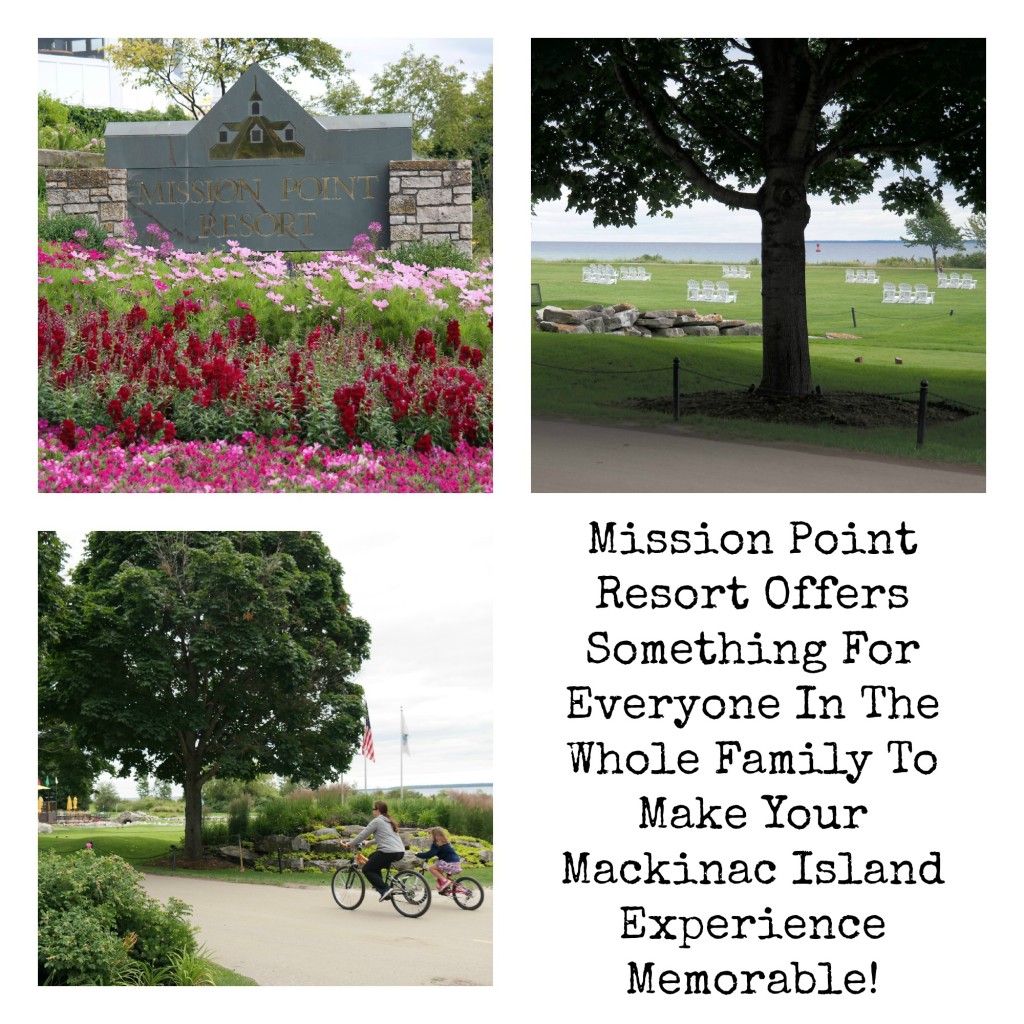 After Dr. Frank Buchman’s death the retreat ended up going through a few iterations including two different colleges before going into a bit of disrepair and then getting purchased by the company who owns it today. You can read more about the history of the resort here: http://www.missionpoint.com/the_resort/history/

Today, you still have much of the history preserved at the resort itself. You can walk through the theatre, climb the tower for amazing views. Walk through the beautifully landscaped gardens or simply sit out on the front lawn in an Adirondack chair watching the sun or birds flying overhead, or bikes going by. 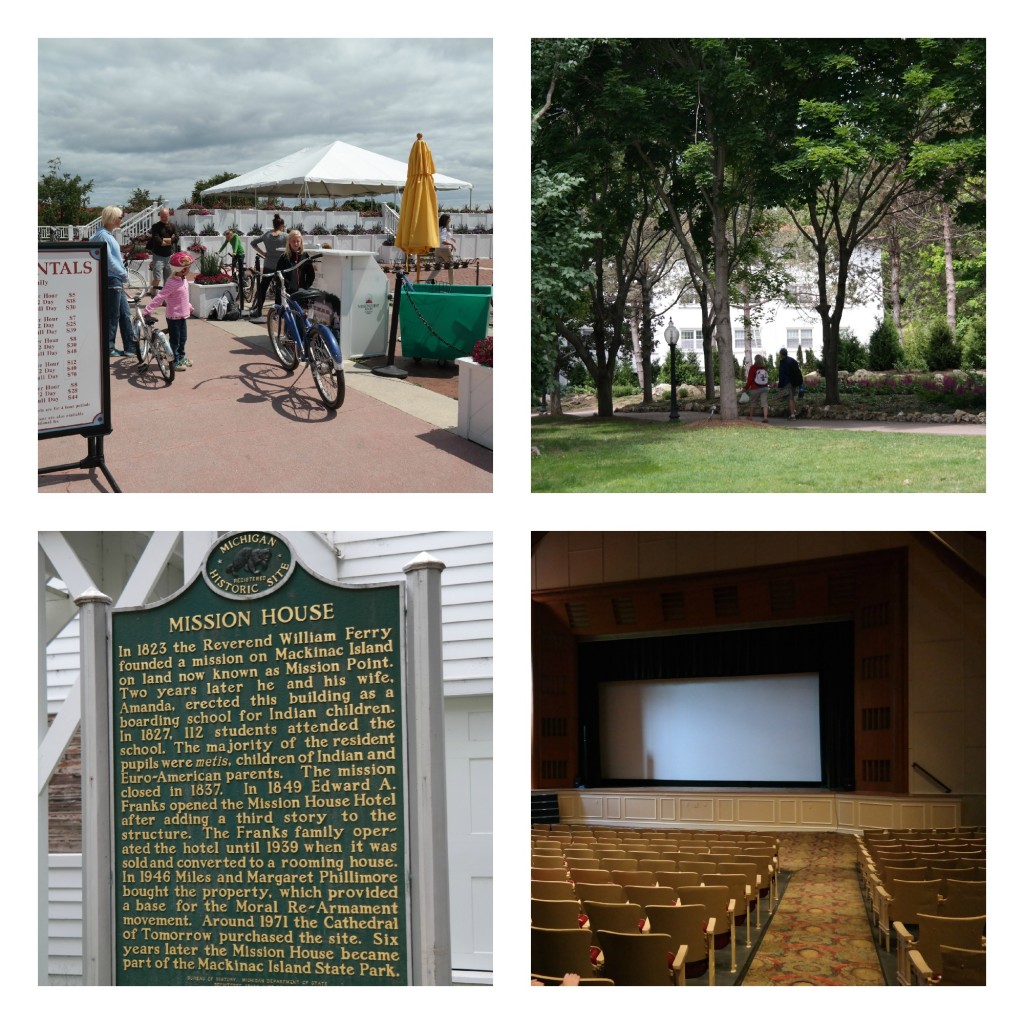 The resort has a ton of amenities, including a pool, workout facility, theatre that offers both movies and live theatre productions, bike rentals, a putting golf course (something like mini golf, but an 18 hole putting green course), three very different restaurants and much more.

We ended up eating lunch at the Round Island Bar and Grill and all of us were quite happy with our food. From our conversation with Bradley, this restaurant was the most family friendly and we ended up choosing to eat here because of this. I ended up trying the Round Island Burger which was juicy and delicious and the onion remoulade that was on it was delicious and added just enough flavor to it too. We also tried a few of their desserts and we can definitely vouch for the Cherry Pie and the Hot Fudge Brownie Sundae as both were decadent and delicious. 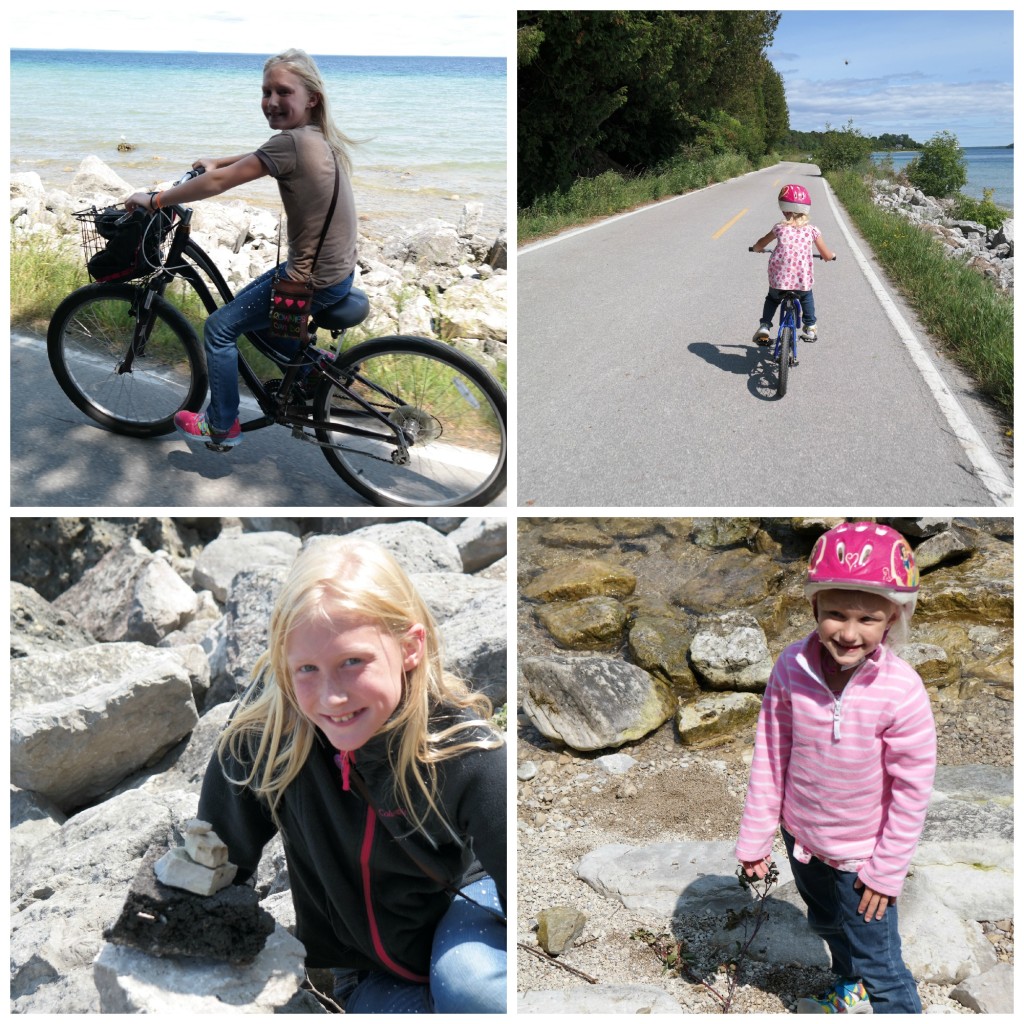 After lunch we rented bikes to be able to tour the island. What is perfect about this island is that there are so many places where you can rent bikes. We ended up picking them up right from the resort which was perfect. They had a wide variety of bikes to choose from and even tandem and ride behinds fr young children. We ended up getting four bikes, one for each of us and we were off on our eight mile trek. While we did not know whether Diva-PJ would make it the entire way, we took our time, making stops where needed and we did make it around the island. We did not make it to the interior of the island, as Diva-PJ’s legs would not make it that far, but we did get to do quite a bit. We now have even more reason to come back in the future! 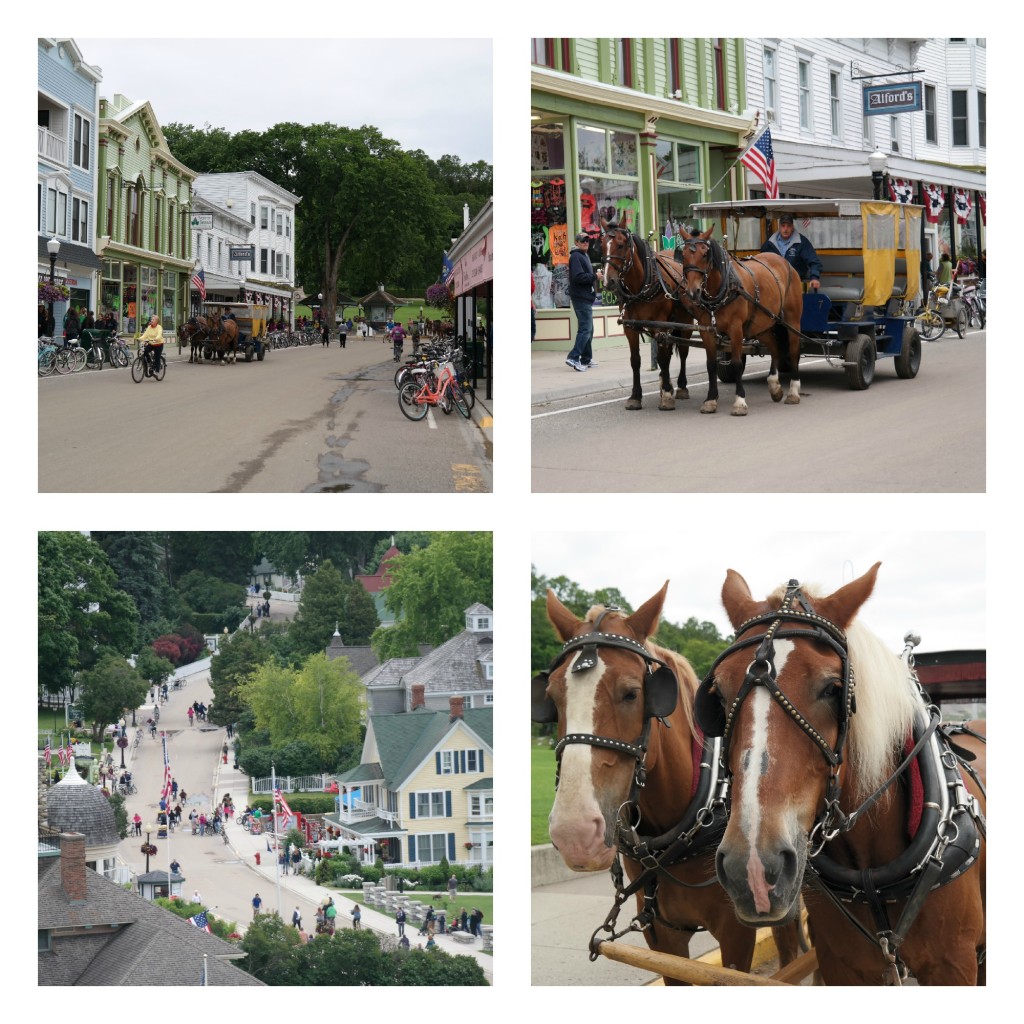 By the end of the day, we wanted to do a bit of shopping and the kids found some souvenirs for themselves. We also had to splurge and purchase some of the fudge that the island was known for. What was hard was that there are at least four companies to choose from when it comes to fudge, so you have to pick and choose. We did get some and now we can say that we will be in a sugar-induced coma for a while to come. We were definitely tired by the end of the day, and in returning to Mackinaw City, we were ready to head home, but we did drive over quickly to get a closer look at the Mackinaw Bridge before leaving for the day. 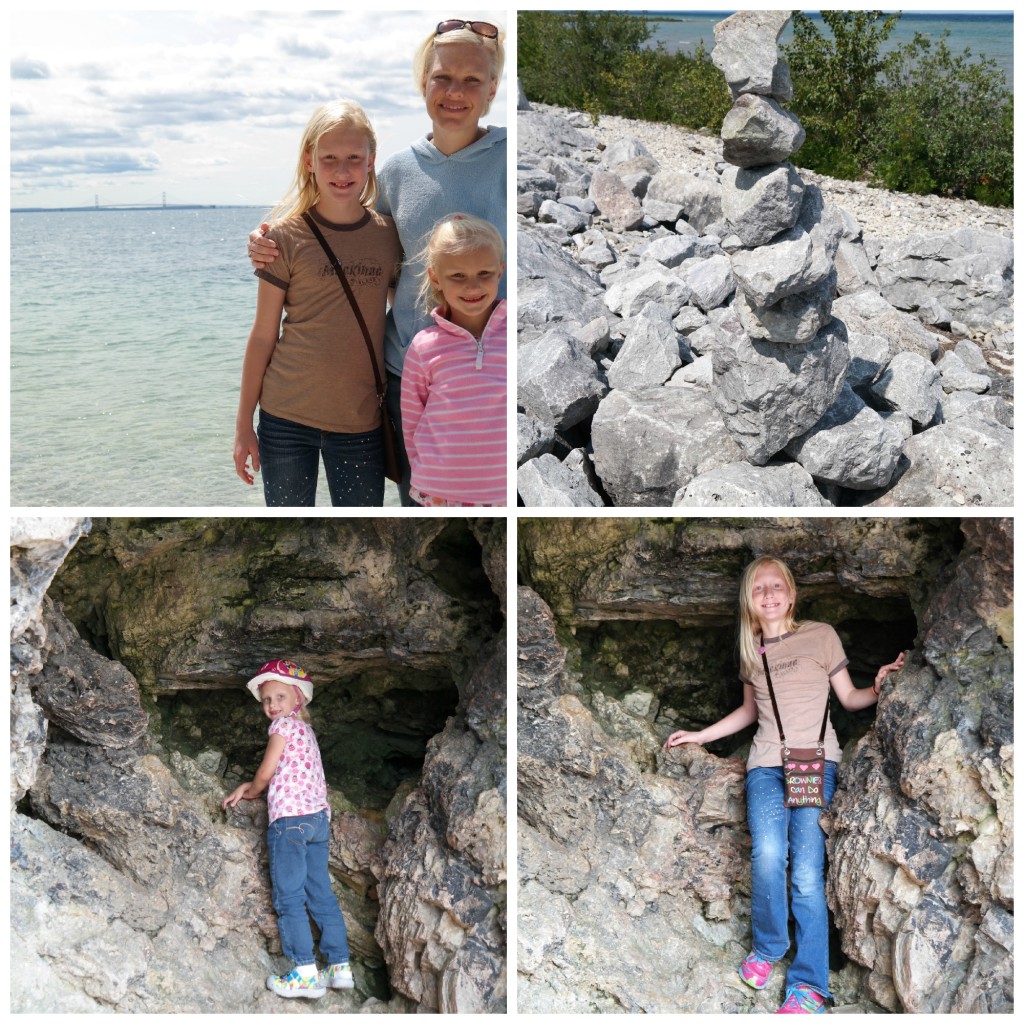 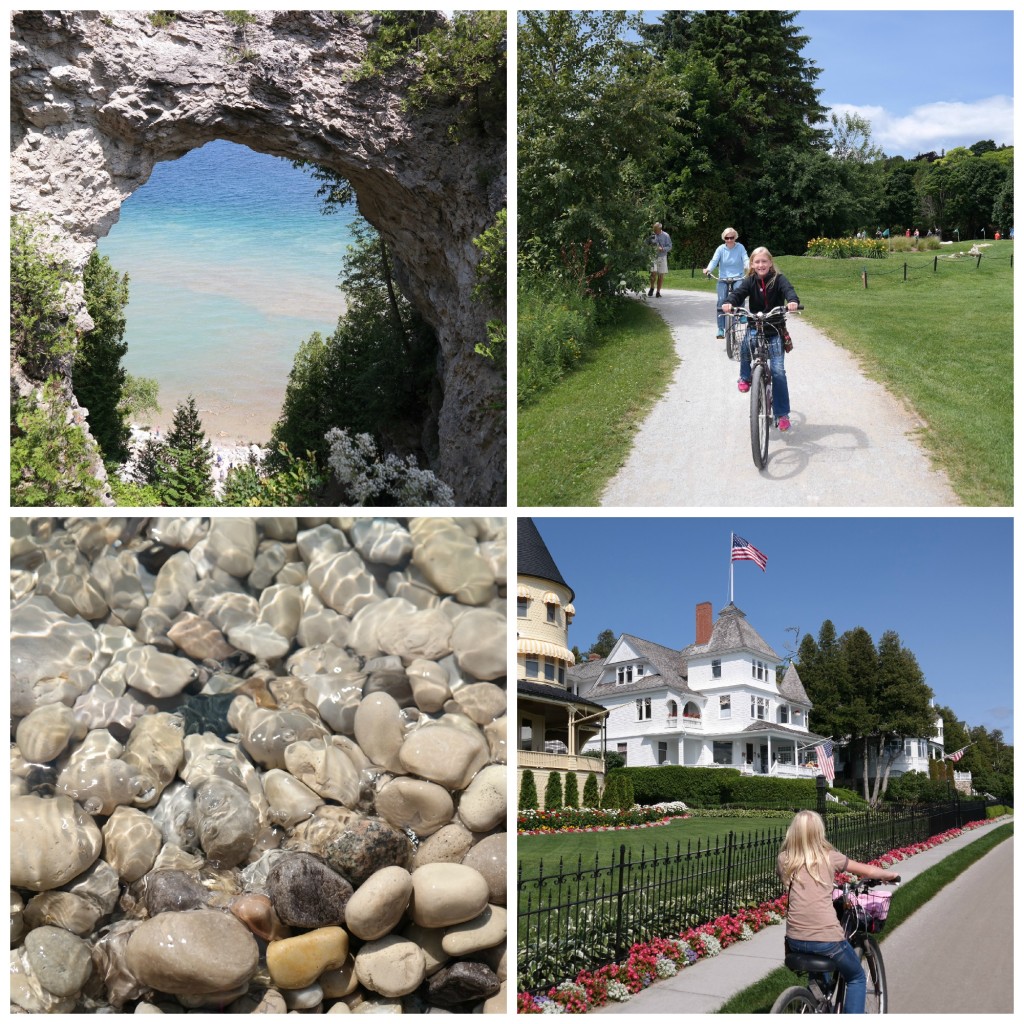 All-in-all this was a great day that we will not soon forget. We had a blast and cannot wait until we have the chance to go back and explore even more in the future! 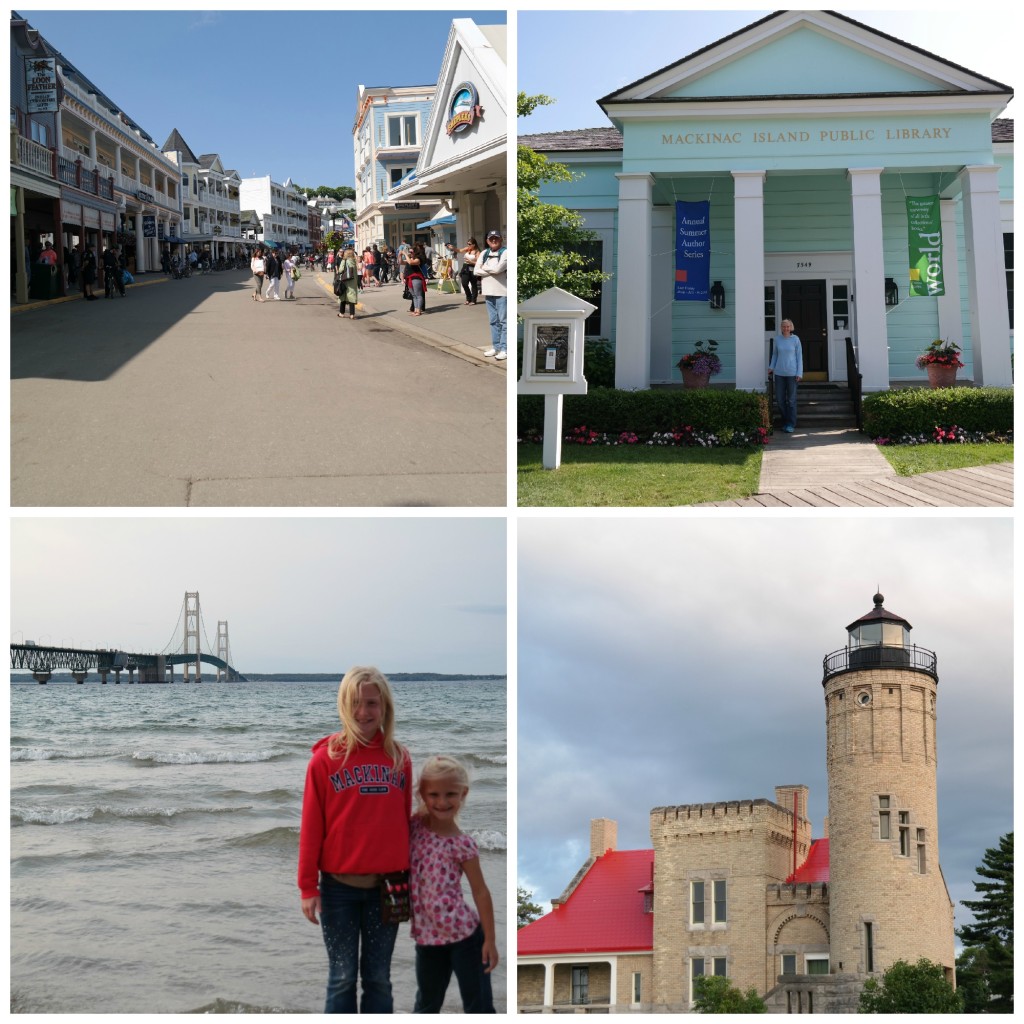