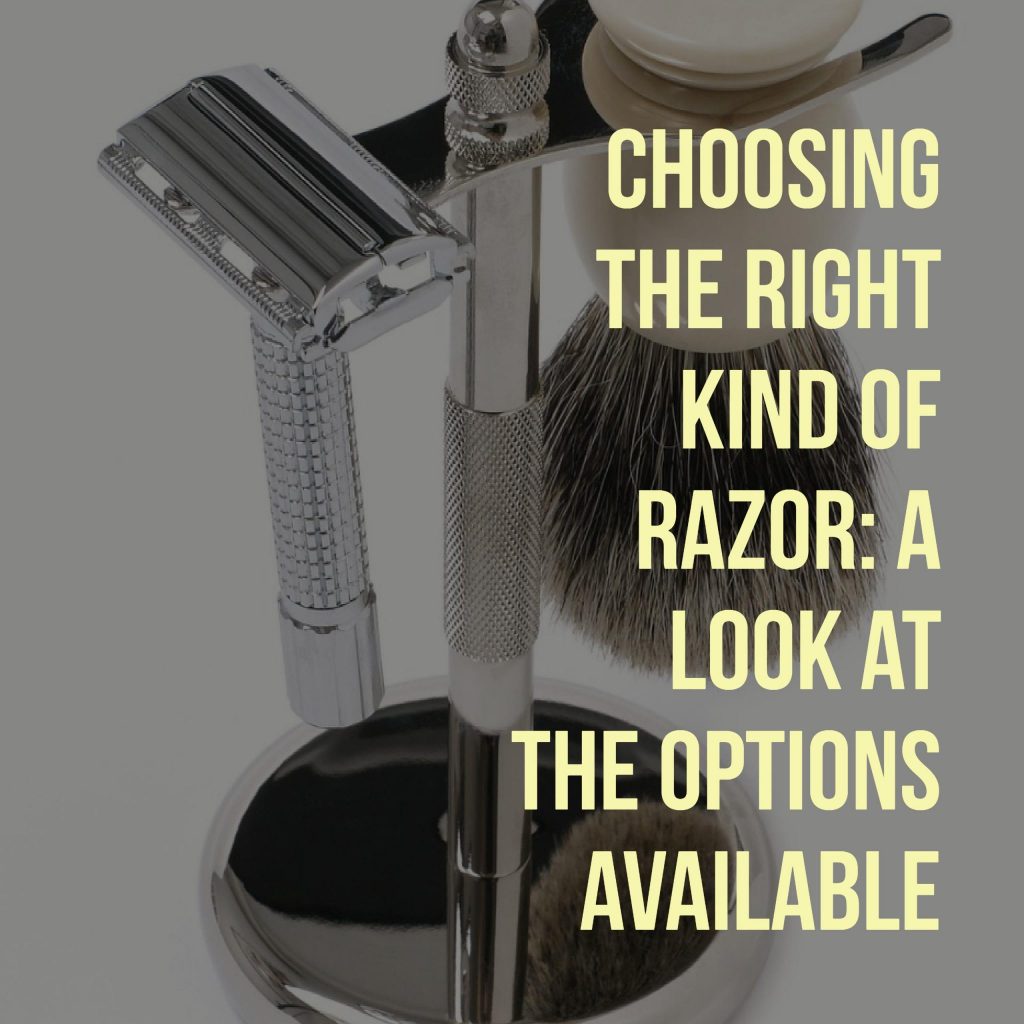 Choosing the Right Kind of Razor: A Look at the Options Available

Choosing the right kind of razor is crucial for ensuring a smooth shaving experience. Most of us start with simple, cheap disposable plastic razors which are widely available. As we grow, we start to prefer razors that will last longer and offer a smoother shaving experience. At this point, we often choose a razor and stick with it without giving much thought to the variety of options available or what the differences between them are. Rather than dedicating the time and money necessary  in order to establish which choice of razor is the best, below is a brief guide to the most common types of razor.

These are the type that we are all familiar with; the typical cheap, plastic razor which isn’t designed to last. The advantages of the disable razor are their low price and the fact that they generally come in multi packs, meaning that even after disposing of one relatively quickly, they still represent good value as the user effectively gets, on average, ten to twenty times the lifespan of an individual razor from each pack.

They are therefore a great solution for emergencies and travel. Their major drawback is, of course, their quality; they will break easily and the blades will be of a low quality, meaning they will blunt before long. Then again, disposable razors aren’t designed to last so this isn’t really a flaw in the concept.

Electric razors, as the name suggests, are razors which incorporate a battery powered motor which rotates. Electric razors are designed to be truly portable and usable on the go; they don’t require shaving cream or water (although this is often preferred) and allow users to shave even when in the car or on the move. They therefore make a great addition to an emergency kit. They can be used relatively safely while in the car, if you are late for work for example, however remember to always ensure that you keep your eyes on the road at all times when not stationary.

Cartridge razors are the most popular kind of razor and they are the perfect marriage of price and quality, as well as durability. A cartridge razor consists of two parts; the body and the head / cartridge. The body is built to survive and the cartridges are designed to be replaceable, but they start at a higher quality than a disposable razor would. The interchangeable head on a cartridge razor allows for more customization with razor sharpness, number of blades, etc. As long as it fits the mechanism, it can be used.

Cartridge razors are generally the best option as they offer the advantages of a disposable razor, such as a lower cost because multiple cartridges can be purchased, each of which extends the razor’s life, but are of a higher quality and designed to last. They can also be turned into safety razors easily.

Safety razors are one of the oldest styles of razor available today. In fact, your parents and grandparents will almost certainly identify a safety razor as being like one from their adolescence.

Safety razors make use of a strip, usually of rubber, that allows only a small piece of the blades beneath to poke through. In doing so the safety razor makes users far less likely to injure themselves; injuries are usually a result of the angle at which the blade makes contact with the skin. Often safety razors are among the best built in terms of durability. This is because they are designed for long-term use, unlike a disposable razor, but do not feature replaceable parts like the cartridge razor does.

If you want to learn more about safety razors, take a quick read of The 6 Best Safety Razors That Provide a Super Close Shave which will help guide you on what to pick.

For those who are design conscious, straight razors also look the most striking and some of the handcrafted ones feature handles carved out of fine wood. Consequently, the price of a straight razor varies; a decent mass-produced one, which may still offer a striking design, usually retails for around $40, while the more expensive handcrafted ones will set you back closer to $200.

Choosing the right razor for you depends on your circumstances and, of course, the blades! Cartridge razors will often allow for variations such as ‘safety blades’ which are designed to be less likely to cause the user injury. Others will offer a closer shave and there may some more specialist options but these are rare.