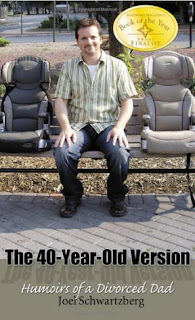 About the Book
“The 40-Year-Old Version: Humoirs of a Divorced Dad” is a unique and award-winning collection of funny and personal essays that examine how divorce reinvents relationships with kids and one’s own sense of Dadhood.

The 40 short “humoirs” — heroic, hysterical, and heartbreaking reflections on being a part-time Dad in a full-time life — make a meaningful read for any parent, particularly the millions who’ve gone through divorce with their senses of humor intact.

About the Author
Joel Schwartzberg is an award-winning essayist and screenwriter, national champion public speaker and speech coach, law school drop-out, horror fan, divorced father, and former Wheel of Fortune contestant. He was a Head Writer for Nickelodeon in 1998 and later an editorial director for Time Inc. Interactive. Currently, he is the Director of New Media for a PBS broadcast news magazine.

Joel’s essays on parenting and other spontaneous phenomena have appeared in The New York Times Magazine, Newsweek, The New York Daily News, The New York Post, The Star Ledger, New Jersey Monthly, Babble.com, Chicken Soup for the Soul, The Huffington Post, and regional parenting magazines throughout the U.S. and Canada.

Joel is also a featured blogger for The Star Ledger/NJ.com’s popular “Parental Guidance” blog and a “Children & Media” blogger for iVillage.

My Take on The Book
This book was a hilarious jaunt through a number of short essays that takes you through the stages that the author went through in being a divorced dad.

For me, I enjoyed the stories and found them to be engaging. I particularly loved the titles that the author used to explain the stories such as: “Beige Food” , “Lazy Dadurday” and and “Sponge Bob Wins” . All of the stories though gave you a wonderful glimpse into the mysterious and funny experiences of a father who is now parenting on his own.

The book does a good job at allowing the reader to look into the mind of a fether going through many different things within his life and dealing with many issues in strides. In my opinion it gives fathers and parents in general a good opportunity to laugh and see parenting through different eyes.

Though Joel does have humorous moments he also has many parts in the book where he is serious and is talking about important topics that impact many families. He is honest with the reader and I for now commend him on this as it makes the book come alive for the reader.

If this book sounds like something you would like for your own library you can find it on Amazon!