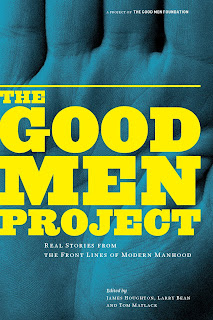 Recently I was asked to review the book and DVD – The Good Men Project. This project consists of a myriad of essays from men in relationship to topics that we all deal with on a daily basis:

I was excited and thankful for being asked to review this as it had a lot to do with what I write about and the topics that quite a few of my readers enjoy as well.

When I received the book itselfand started to read the essays/stories of the contributors, I was amazed at some of the things that these men went through in both growing up and struggling with what it means to be a man. I can relate to some of the issues, but I also found myself shaking my head in wonder at some of the stories and saying to myself, I can’t believe that they had to deal with this.

The writers were very forthright and open with their stories. The frankness is something that I have not seen in other such non-fiction accounts. As a man, many of the topics and issues that are raised are, as many of the writers reflect, taboo, or issues that should not be raised with other men. That is the amazing thing about this project and this book and DVD, it blows open the veil of secrecy that surrounds the persona,and at times myth, of what it means to be a man in society today.

The DVD also provided the viewer with a similar glance into the lives of those men documented. There was some profanity used, so I wouldn’t suggest it for the very young. I would say though that the topics covered in both the DVD and book are ones that teenage young men would and should learn and talk about with their friends or better yet their fathers.

I would recommend both the DVD and book for all men out there. The stories are short and engaging and you will find yourself identifying with some of the issues that some of the men raise, and there will be others that you will not as well, but all are important to reflect on and talk about, as it opens a discourse into what being a man is all about.

If this is the first time you have heard about this project, I encourage you to visit the project’s website to learn more.When you finish looking at the website, take a look at the project’s Facebook page and at the co-founder’s Twitter page.