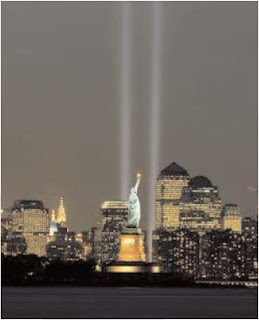 I think that most of us can all remember the moments that surrounded the 9-11 tragedy that struck our nation 18 years ago.
I remember where I was… I was in my office at the university that I was working at as a Student Affairs Professional. I believe it was J-Mom who called me and told me to turn on the radio because it looked like a plane had collided with one of the twin towers. Unbeknownst to us was all the malice that was behind the first attack, let alone the subsequent attacks within New York City as well as the Pentagon and in Pennsylvania.
I remember hearing this and calling my colleagues to find a television that we could turn on and we watched in our main office as the tragedy revealed itself. I was numb, dumbstruck. Only once before had I felt this way, and that was when the Space Shuttle Challenger exploded. I simply had never witnessed such hatred, such a loss of life, and later that week we found out how close to home this hit our family.
The Saturday before 9/11  my wife and I celebrated the wedding of a high school friend of J-Mom. The wedding was a wonderful event full of love and laughter. At that event, I was able to meet a friend of the bride named Kelly Ann Booms who sat in front of us during the wedding. She made a comment that she had to get back to Boston on Sunday because she had a business trip that she had to fly out for (to Los Angeles) early on Tuesday morning (9/11). Later that week we found out that Kelly was a passenger on the first plane that hit Tower 1 (Flight 11). We were shocked that someone we just spoke with could be gone in an instant and it brought the national tragedy to a whole new level of meaning. We now felt a part of this tragedy and not as far removed.
The images of the first few hours of 9-11, and the first few days afterward still are burned into my memory and I think they will never leave. For my generation, I think that this event will be the event that truly defines our generation as it may have been Pearl Harbor for my grandparents or the JFK assassination of JFK for my own parents.
So today, 19 years later I take a moment to remember Kelly and the other victims of the 9/11 attacks. May we never again live through such an event.