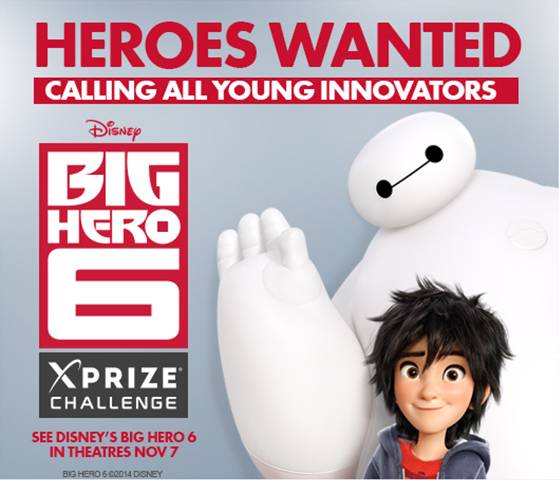 XPRIZE, Walt Disney Studios Motion Pictures and Disney Corporate Citizenship announced the winners of the DISNEY BIG HERO 6 – XPRIZE CHALLENGE today. Much like the characters in Disney’s “Big Hero 6,” people between the ages of 8 and 17 were asked to harness their creativity and come up with innovative ideas to tackle some of the world’s biggest
challenges using science, technology, engineering, art and/or mathematics (S.T.E.A.M.).
Hundreds of videos were submitted and narrowed down to 20 finalists. From there, 6 winners were selected based on a combination of public voting and the scores from a panel of judges: Dr. Ed Catmull, President of Walt Disney and Pixar Animation Studios; Gwynne Shotwell, president and CEO of SpaceX; Dean Kamen, an inventor, entrepreneur, and founder of FIRST ®; Anousheh Ansari, co-founder and chairwoman of Prodea Systems (and the first female private space explorer); and Jon Snoddy, VP, Walt Disney Imagineering Research and Development.

The real-life “Big Hero 6” is comprised of:

Said Catmull, “Watching the finalists’ submissions, I was so impressed by the creativity and passion in each of their videos. It was an absolute pleasure to be part of this judging panel. We look forward to hosting them at the Hollywood premiere of ‘Big Hero 6.’”
“At XPRIZE, we believe that innovation can come from anywhere and that the most effective way to address the world’s biggest problems is by tasking the public to come up with solutions,” said Trish Halamandaris, senior vice president marketing & communications at XPRIZE. “The creativity and ingenuity of the submissions for this contest reinforce this belief and prove that these young people are not the innovators of tomorrow but rather the innovators of today.”