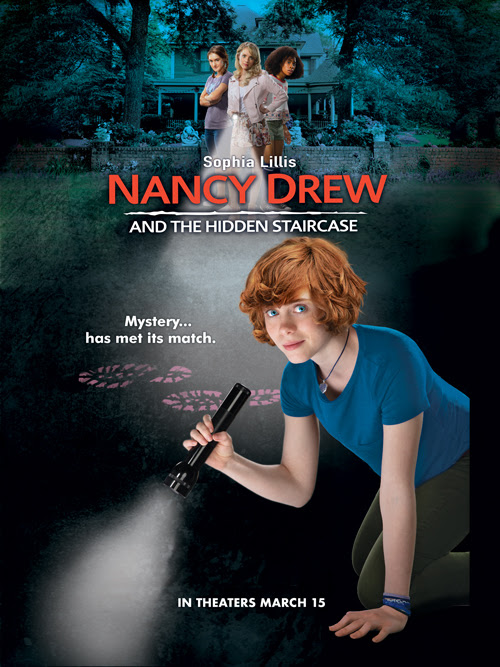 The iconic mystery solving teenager from the classic Nancy Drew books is back with an all-new feature length film that will keep you guessing until the very end!  Warner Bros. Home Entertainment will release Nancy Drew And The Hidden Staircase on Digital starting March 26, 2019 and Blu-ray™ Combo Pack & DVD on April 2, 2019. Executive Produced by Ellen DeGeneres, the film stars Sophia Lillis (IT and “Sharp Objects”), Sam Trammell (“True Blood” and “This is Us”), and Linda Lavin (“The Good Wife” and“Alice”) and follows Nancy Drew in her new town, making new friends and on a mission to solve the case!  The film carries a suggested retail price of $19.99 for the Digital, $19.98 for the DVD and $28.98 for the Blu-ray Combo Pack.
After the death of his wife, Carson Drew decides to leave Chicago behind and make a fresh start with his daughter in River Heights.  But for 16-year-old Nancy Drew, life in a small town is mighty dull. She longs for excitement, adventure, and the chance to make a difference.  Nancy gets that opportunity when she is asked to help solve the ghostly activity at the Twin Elms mansion.  Can she help explain the creaking footsteps, exploding lightbulbs and the ominous creature?  Is it the handiwork of high-school bully Derek Barnes? Or is it possible that the ghost of original owner Malcolm Colfax is back for revenge? Recruiting her best friends George and Bess, along with local “mean girl” Helen, Nancy Drew is on the case!
“Nancy Drew has been a source of inspiration to countless girls as she has her wits and ingenuity to solve intriguing mysteries.  Now, Nancy is back in an all-new film from Ellen DeGeneres,” said Mary Ellen Thomas, WBHE, Vice President, TV Marketing, Family & Animation. “Cast perfectly with Sophia Lillis as Nancy Drew, this mystery has a modern-day edge as Nancy learns about responsibility and friendship while solving mysteries.”
Nancy Drew And The Hidden Staircase is produced by A Very Good Production and A Red 56 Productions. Based on the novel by Carolyn Keene, the film is Executive Produced by Ellen DeGeneres and Wendy Williams (Free Ride), with Jeff Kleeman (The Man From U.N.C.L.E.) and Chip DiggIns (A Walk In The Woods) serving as producers and Rachel Abarbanell (“Splitting Up Together”) as Co-Producer. Katt Shea (Poison Ivy) directed from the script written by Nina Fiore & John Herrera (“The Handmaids Tale”).

As a fan of Nancy Drew, my kids and I watched this great movie this past weekend. One of the things that we loved first was that the movie was brought into today’s world. You have a Nancy Drew that is a bit of a rebel. She rides a skateboard and is definitely willing to get herself into some trouble. The backstory to Nancy and her dad is a bit different that in the books, but that is fine. The story itself was quite different than the book, but even though that is the case, it was still a story that kept you on the edge of your seat from beginning to end. We also liked that the actors that played Nancy and her friends were ones that were new and fresh. While some of the older actors are ones you may have seen before, the girls were fresh and fun and brought a great energy to the screen too! Overall, if you love Nancy Drew, check out this new take on a great book!