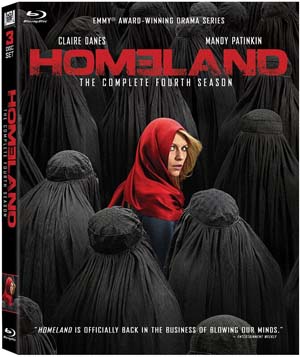 While I was late to watching the earlier seasons of Homeland, I did binge watch the first three season earlier this summer. For me, this was the type of series that once you start you do not want to stop! This season is so action packed and each episode is a thrill ride full of suspense and drama as well. The actors in the cast have a great chemistry together and I, for one, love how well Claire Danes plays the main character in the show, Carrie Mathison. What is great about her portrayal of the character is that she shows that she is flawed, and that is ok. So get ready for twists and turns in this season, as it was a non-stop and fun season!

Gripping suspense escalates to a fever pitch in the brilliantly reinvented fourth season of this Emmy Award-winning thriller. In her new role as a CIA station chief, Carrie (Emmy winner Claire Danes) convinces Saul (Emmy nominee Mandy Patinkin) and Quinn to help her hunt down one of the world’s most dangerous terrorists. But when Carrie recruits a young Pakistani as an asset, the lines between right and wrong blur and the operation spins out of control. Facing unclear loyalties at every turn, Carrie must take extreme measures and risk everything to protect her country.