My family and I love to watch movies together and we have been so excited to see the new Black Panther movie as we did not get to see it in the movie theater. Just recently we received a very cool package with some very fun items included to help us to have a very fun movie night together.

This movie arrived at just the right time. We were planning to go and see the new Avengers movie, but had yet to see Black Panther. We quickly opened our box and decided to watch the movie then and there. 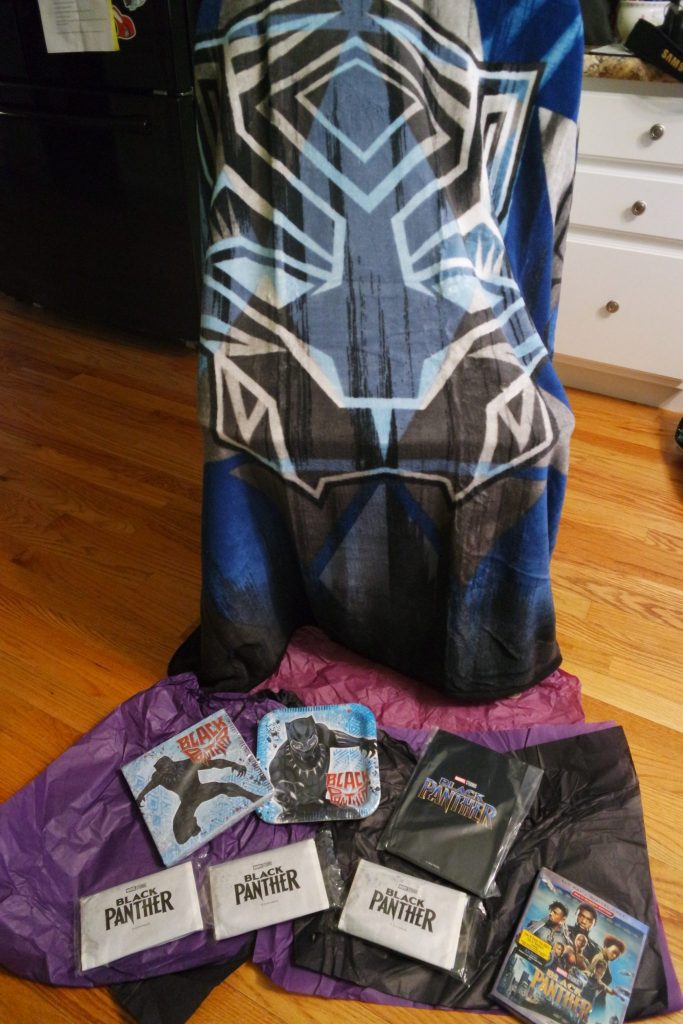 It was a cooler day so my daughter and I made some popcorn, and snuggled up under the new Black Panther throw that was sent to us for a fun night of watching this great movie. 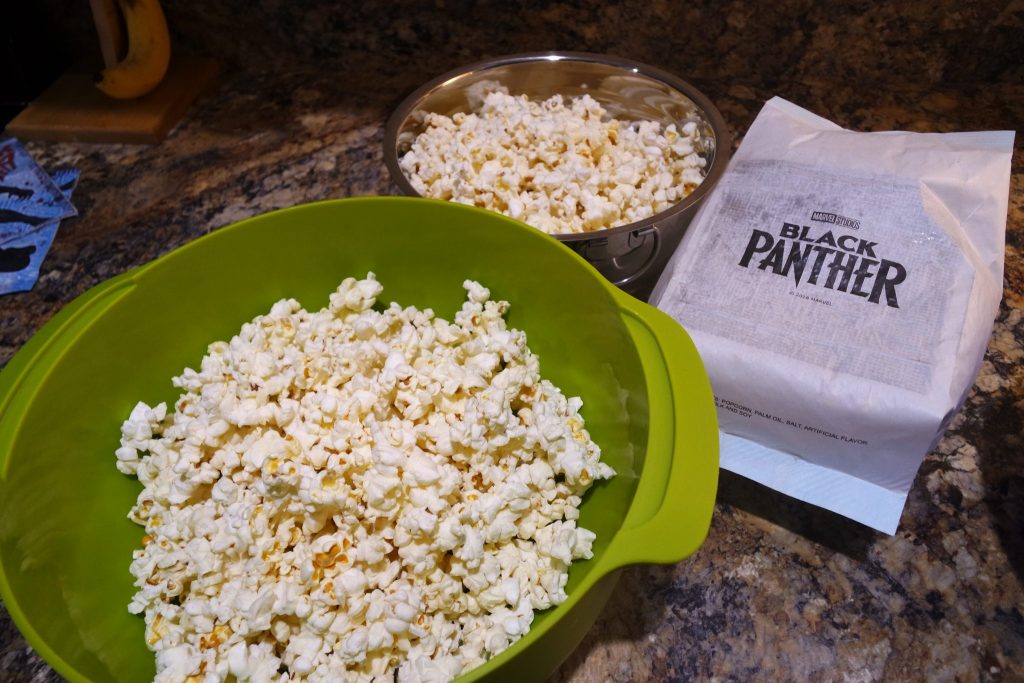 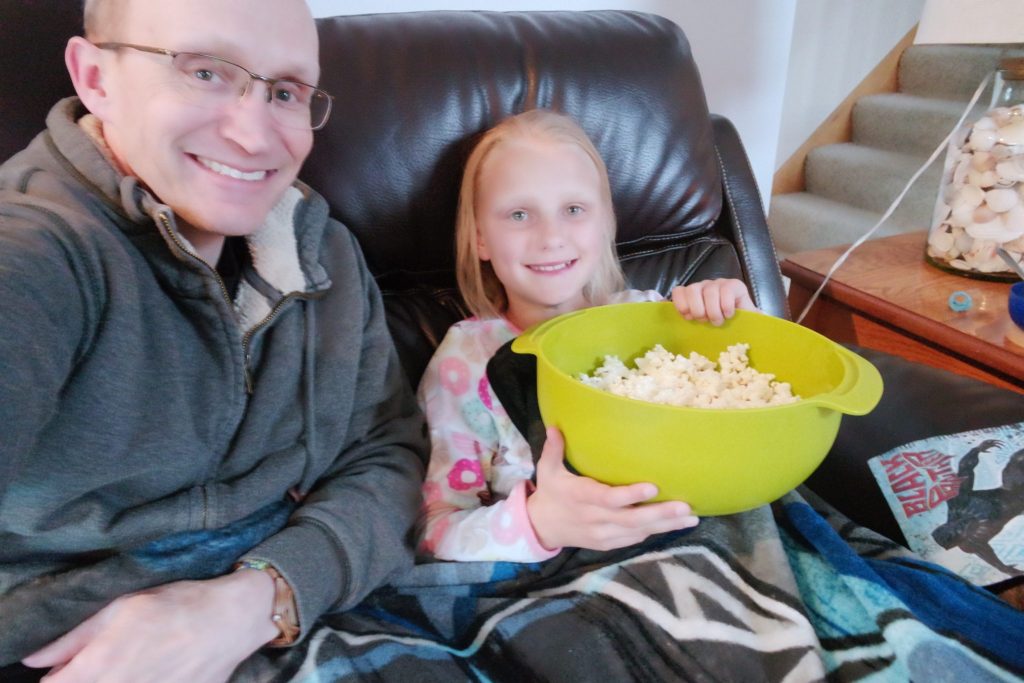 What we both loved about this film was that there was action from beginning to end and so many new characters. While we had met some of the characters in Captain America, we did not really know much about Wakenda, but this movie expands the Marvel Universe and allows you to better understand more about Wakenda in general and about the culture as well. 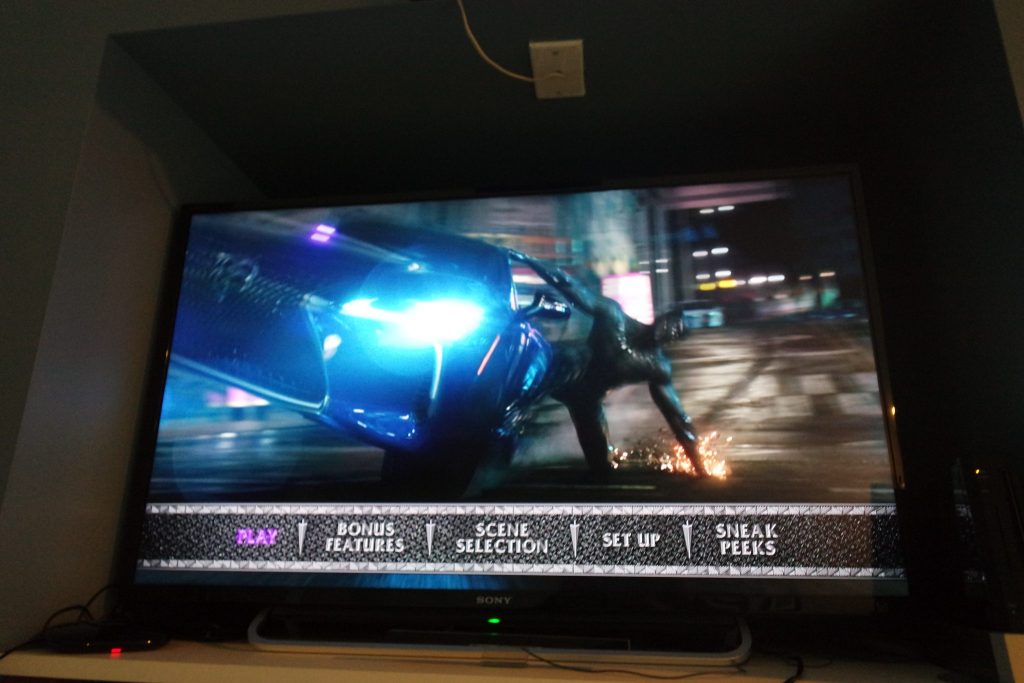 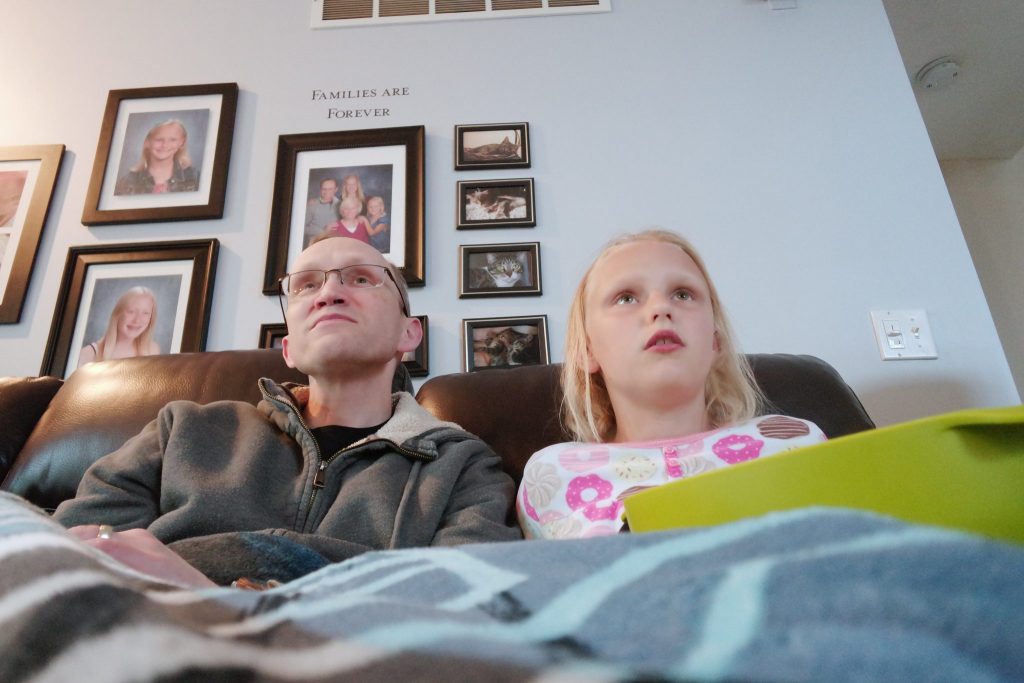 We had a blast watching the movie, but also watching all of the great bonus features to learn more about the movie and the making of the Black Panther film. There were definitely some twists and turns in the film, but in the end it was a well made film that makes you want to see more.

Below are some additional bonus features that I wanted to share with you as they really give you a glimpse into the film itself!10 THINGS YOU NEVER KNEW ABOUT MARVEL STUDIOS’ BLACK PANTHER

To celebrate the in-home release of Marvel Studios’ Black Panther, we’ve uncovered 10 stellar secrets from the making of the epic super hero saga. The mighty new Marvel movie is released Digitally in HD, 4K Ultra HD™ and Movies Anywhere on May 8 and on 4K Ultra HD™, Blu-ray™, DVD and On-Demand on May 15. Wakanda forever!

Bonus Clip – The Beauty of Language

To celebrate the in-home release of Marvel Studios’ Black Panther, we’ve uncovered 10 stellar secrets from the making of the epic super hero saga. The mighty new Marvel movie is released Digitally in HD, 4K Ultra HD™ and Movies Anywhere on May 8 and on 4K Ultra HD™, Blu-ray™, DVD and On-Demand on May 15. Wakanda forever!

THE COMIC BOOKS WERE A HUGE INSPIRATION FOR THE FILMMAKERS

When it comes to the inspiration behind the story of Marvel Studios’ Black Panther, director and co-writer Ryan Coogler admits that he delved deep into the history of the acclaimed Marvel comic book series. “We pulled from all of the comics,” Coogler explains. “When you watch our film, you will probably see something from every writer that has touched T’Challa’s character in the Black Panther comics. Everything from Stan Lee and Jack Kirby’s initial runs through to Don McGregor, Christopher Priest, Jonathan Hickman and Brian Stelfreeze. We grabbed from it all. Each writer left their own mark, so Agent Ross [played by Martin Freeman in the movie] came from Christopher Priest’s run and the character of Shuri came from Reginald Hudlin’s run. Each run left something for us to pull from, but we pulled from absolutely all of them.”

“It was incredible to walk on to the Wakandan sets,” enthuses Danai Gurira, who plays Okoye in the movie. “Our production designer, Hannah Beachler, was amazing. I remember walking into the Tribal Council room and thinking, ‘This room is stunning.’ The floors were see-through. There were massive, beautiful panther statues. The throne was very African. The entire décor was very African. It was an amazing experience, which was very rich for my character because I stood there and I thought, ‘This is like nothing else on the planet and it’s my character’s job to protect it.’ Hannah pulled from lots of awesome traditional African esthetics. You don’t get to see it in the movie, but she also designed T’Challa’s office, which was another amazing room on set. We shot some scenes in there, which were left out of the movie – but the office was constructed and it looked amazing.”

“We took a really important trip to South Africa to do a ton of research for Black Panther,” reveals production designer Hannah Beachler. “We went up and down the country, which helped immensely when we started to create the sets. It was incredible to see all the colors, the textiles and the way things were built. In the end, we shot a lot of plates and second unit footage in South Africa. We shot footage in Uganda, which was used to show the farm land and open space of Wakanda. It was beautiful. We also shot at Victoria Falls in Zambia. When the fighters come flying through the falls and get to the challenge pool; that flight through the falls is Victoria Falls. But when you get to the challenge pool, what you see behind them is a bit of Iguazu Falls, which is in South America. We smashed the two together because we wanted a horizon.”

“The tag scene with Bucky [played by Sebastian Stan] at the end of the movie came as a wonderful surprise to me,” explains Letitia Wright, who plays Shuri in Black Panther. “I was so happy when I read about it. Props to Ryan [Coogler] for adding it to the movie. This scene was shot quite late in the production, but I really enjoyed it. It was a beautiful day on set and I thought it was a great way for us to find out where Bucky had been hiding in Wakanda. We shot the scene in a forest area somewhere in Atlanta, but it only took a day. Sebastian was really great to work with. He’s a good chap.”

THE IN-HOME RELEASE IS PACKED WITH DELETED SCENES AND OUTTAKES

Marvel fans can delve deeper into the wondrous world of Wakanda with the exclusive bonus features packaged with the in-home release of the movie. Not only are there behind-the-scenes featurettes and never-before-seen outtakes, but there are also a number of deleted scenes. “There are a couple of scenes with Okoye and W’Kabi [played by Daniel Kaluuya] that I would love people to see,” explains Danai Gurira. “There’s a scene between Okoye and W’Kabi, which takes place after Killmonger tells us what he’s going to do with the kingdom. Okoye is very disturbed by her man seeming to positively respond to Killmonger. There’s also a scene where W’Kabi and Okoye go head-to-head. Okoye pushes W’Kabi to a place where all the rage he had towards T’Challa comes out. I hope some of those moments end up in the deleted scenes.”

LUPITA NYONG’O HAD TO LEARN MULTIPLE LANGUAGES FOR THE MOVIE

“The African language that we speak in the movie is Xhosa, which is a Bantu language from South Africa,” reveals Lupita Nyong’o, who plays Nakia in Black Panther. “It has the clicks which my native tongue does not have, so I had to learn it for the movie. I worked very closely with a dialect coach to get it right. I also speak Korean in the film, which was a doozy. A week before we shot the scenes in South Korea, they finalized exactly what Nakia was going to say, so all week I kept practicing the lines over and over again. However, I slipped up from time to time. At one point, the Korean extras laughed because they told me I’d said something about a barbecue by mistake – but we got there in the end.”

“The audition process was really interesting,” admits Letitia Wright. “I sent over two tapes from London and I didn’t think anything would happen – but then I got a call asking me to fly out to Los Angeles for a screen test. That’s where I met Ryan [Coogler] and Chadwick [Boseman, who plays T’Challa]. Thankfully, we had an immediate connection. I went home and I didn’t hear anything for a couple of weeks – but then I was called back for another screen test. This time, I flew to Atlanta and they put braids in my hair – and I knew I just had to have fun with the audition. I remember thinking, ‘Man, if this happens, it will be very special for me.’ A couple of weeks later, I found out they wanted me for the role of Shuri. I was standing at a bus stop in London when the call came through. I went crazy! I was screaming at the bus stop! I was overjoyed to be part of this epic movie.”

CAST MEMBERS HAD TO TACKLE A GRUELING SIX-WEEK BOOT CAMP

Before the cameras started to roll on Black Panther, cast members flew out to Atlanta to prepare for the movie’s awe-inspiring action sequences. “The boot camp lasted six weeks,” reveals Danai Gurira. “It was really helpful to get athletically conditioned for the film shoot, although we also got into the specifics of the movements of our characters. We learned fight choreography, as well as different techniques of how our character was going to move on set. It was intense, but I learned a lot. Okoye is the general of the army and the head of the Dora Milaje, so the way she fights is very traditional. Her movement with the war spear comes from very ancient movements of the nation. It was really interesting to learn.”

THERE WERE RAP BATTLES BETWEEN THE ACTORS ON SET

An exclusive gag reel has been created for the in-home release, which is packed with comedy bloopers and slapstick slip-ups from the set of the movie. “There were a lot of funny moments during the filming of Black Panther,” recalls Letitia Wright. “Even though the shoot was a lot of hard work and there were some incredibly physical scenes, we always found moments to have fun. We had rap battles in between takes, or we organized dinners and bowling sessions. There was a day where we did a Get Out challenge, because we had [Get Out star] Daniel Kaluuya working with us. Who won the rap battles? To be perfectly honest, I think I was the best. I was up against a lot of people, but their rapping skills were terrible.”

LOOK CLOSELY AT THE MOVIE’S KIMOYO BEADS FOR HIDDEN QUALITIES

Hannah Beachler admits she had a ton of fun working on the high-tech gadgets for the movie. “The Kimoyo beads are my favorite,” the production designer admits. “I really pushed the design on them because I knew the beads needed to be something really cool. The Kimoyo beads were originally introduced in the Black Panther comics – but Ryan [Coogler] loved the idea of using them for communicating in the movie. If you look closely at the beads, you’ll see there’s a prime bead, which is given to you when you’re born in Wakanda. There is a little peak on the prime bead, which makes it stand out from the others. All the beads’ symbols light up, but the prime bead lights up completely. A Nigerian language – nsibidi – is used for the symbols on the beads. You’ll also see nsibidi writing on columns of some of the iconic buildings in Wakanda, too.”