Our 126th Dad in the Limelight is author Tae Kim. I want to thank for Tae for being a part of this series. It has been great connected with him and now sharing him with all of you. 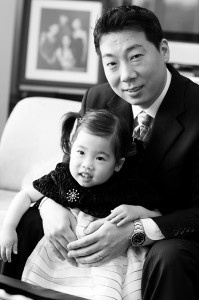 1) Tell me about yourself, (as well as how you are in the limelight for my readers knowledge)
Hi. My name is Tae Kim.

Not sure if I’d say I was in the limelight, but I recently authored a novel,

‹ ›
, which brings with it a certain amount of visibility. The book is a work of fiction and also my first literary publication.

I’m not a writer by trade – I work for HSBC Bank as a structurer for credit products. Prior to coming to work for the bank, I was a securitization attorney at a large New York law firm and then a securities analyst for Moody’s Investors Service.

I’m married with three children ages 6, 4 and 2. My two eldest are daughters and my youngest is a son.
3) What has been the largest challenge you have had in being a father?

I find that becoming a father makes you more vulnerable; vulnerable to the unending desire for everything to be perfect for your family. I think I could have easily been content with the life I was living when I was single. But now, as the father of three, I worry more about the future and the well-being of my children. Having a bad day at work is bad, but it’s not nearly as terrible as when I find out one of my kids had a bad day at school. 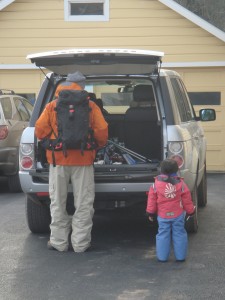 4) What advice would you give to other fathers?
Just being there for your kids is the largest part to making them happy. And I recognize this isn’t always the easiest thing to do. In the beginning I was more caught up with being the father that my children could be proud of – you know, the strongest, fastest, smartest dad on the block. Now I focus more on juggling my schedule to be present at those events my kids consider important.
5) Seeing that you (or your position) are in the limelight, how have you come to balance parenthood and outside life? If you are currently not in the limelight per se, please still answer this in regards to how you balance parenthood and outside life.
It’s difficult to balance what seems to be an ever-shrinking number of hours in the day. In fact, I chose to write my novel in some ways at precisely the worse time. It was the middle of 2008 and as you may know we were in the midst of the credit crisis and the collapse of the financial markets. I was working around the clock with three kids, ages 4, 2 and newborn at the time, and an exhausted wife at home. In some ways, it was having absolutely no time for myself that committed me to making some time. So, instead of driving to work, I started taking the bus. And I wrote the book on the commute to and from work.
6) What have you learned from the fathers that you have interacted with?
We all love our kids. Fortunately, most of my friends and I have jobs where we have the weekends off. It’s still very tempting to take an entire day and play a few rounds of golf, have a leisurely dinner and some drinks. And I think it’s important to continue to preserve time for yourself, at least once in a while. But obviously, the frequency of these outings will lessen. I just don’t miss it quite as much as I thought I would. It’s kind of rewarding just spending the day with the kids.
7) What else would you share regarding your experiences as a father thus far?
Kids are much more influenced by you than you might think. For instance, shortly after my book was published, I participated in my oldest daughter’s “Community Helper” project at school where parents come in and give a short presentation on what they do. I talked a bit about being an author, brought in some gift pencil sets and had all of the kids in the class make a short book. All the books were then compiled and published into a picture book entitled “Our Favorite things.” Since that time, both my daughters have continued to make these little picture books on their own which, I have to admit, warms my heart.
8) What have been the most memorable experiences that you have had thus far as a parent?
Over a recent long weekend, we picked up and left for a ski lodge in the nearby Poconos. The resort had the largest snow tubing facility within our immediate area.

I suspected everything about the trip would be flawed – it was Martin Luther King weekend, so I suspected the slopes would be beyond crowded, we made reservations at the last minute so we couldn’t get as big a room as we needed, and my two year-old had yet to spend any significant amount of time outside in cold weather. More significantly, I recognized we’d be outnumbered; three kids against two adults. We’d have to play zone.

I’d like to say my apprehensions were unwarranted, but the trip lived up to my fears. What made it worse was that the tubes were much larger than I had expected. None of my kids were able to carry their own tube. So, on the first run, I found myself wrestling with four tubes as I struggled to maintain my balance on the “Magic Carpet Lift.” I saw my four year-old daughter, standing immediately in front of me, nearly teeter off the side of the lift as she refused to heed my warnings – and yes, I was shouting – to stand still.

We barely make it up to the top of the hill, I tie the four tubes together, and place each of my children into a separate tube. My wife climbed into the fourth tube and waited for the starter while I began walking down the side of the hill, muttering to myself how stupid this idea was. And yes, I know, I could have tubed down the hill if I had just brought up a fifth tube, but it wasn’t humanly possible.

I’m about halfway down the hill when I see my family start to descend. The four tubes spin around slowly in unison and I can actually see the wholly contented looks on my children’s faces, even through their goggles and ski helmets. As they pass me and continue on down to the bottom of the hill, I can hear their joyous yelling. And, in that moment, it was all worth it. So we did it again and again.

Fatherhood is in many ways similar to our tubing trip – a bit of hardship followed by those moments when you know, without a doubt, it’s all worth it.

If you have any questions for Tae, please leave a comment here and I will make sure that he gets them so that he may be able to respond!