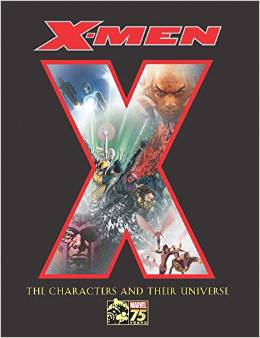 About the Book
X-Men: The Characters and Their Universe

tells the story of this unique band of comic book heroes from their creation in 1963 by the dream team of writer Stan Lee and artist Jack Kirby, through their late 1970s re-emergence as a platform for socially and politically relevant storytelling, and up to the present as one of the globe’s hottest franchises.

This colorful, lavishly illustrated volume also traces how the characters have been adapted into the media of television and film, including the ground-breaking 1992 animated series and the blockbuster feature films, including X-Men III: The Final Stand, released in May of 2006.

For fans of the comic books, this volume also provides a unique one-source catalogue of every major character that appeared from 1963 to the present, including all the various teamings of characters, the significant comic book series, the various character relationships and evolutions, and the classic storylines that have all woven together over the decades to create the dazzlingly complex and fascinating tapestry of the world of mutants.

X-Men: The Characters and Their Universe is a book that no fan of Marvel Comics, of super heroics, of animation and action adventure filmmaking, even of popular culture of the late 20th century itself, will want to be without.
My Take on the Book

As a person who has loved the X-Men for many years this book really brings together the entire universe and allows you to really get to know the characters and the history behind the universe itself. The X-Men franchise and story has evolved and changed so much over the years that having something like this is helpful as it is sometimes hard to follow the changing dynamics of the team, the changing backstories and powers of the characters, and more. All of this being said though, this comic has been one that has truly with stood the test of time and for me I think it has a lot to do with the face that there has always been a struggle between the two factions that you see here. Those that are main stream and those that are different. I think so many connect to the fact that so many of these “mutants” are so much like us with similar fears and concerns and have been ostracized because of their difference. Whether you agree with the premise of the story of the comic or not, this has definitely been a well written comic with amazing artistry throughout it’s 50+ years and this book encapsulates all of this well. There is a ton of information, images and more for any X-Men fan within this book. You will not be disappointed!