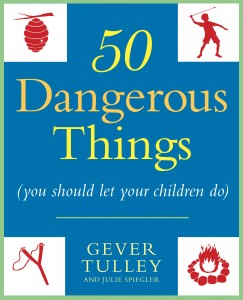 Fifty Dangerous Things (you should let your children do) is the first book from the people who created Tinkering School. With projects, activities, experiences, and skills ranging from “Superglue Your Fingers Together” to “Play with Fire,” along with 48 other great ideas, the book is a manifesto for kids and parents alike to reclaim childhood. Easy to follow instructions, fun facts, and challenging undertakings that will engage and inspire whole households.

Why Fifty Dangerous Things? First off, Five Dangerous Things just weren’t enough (although the audience at TED thought it was a good starting point). More importantly, there are many “dangerous” things that are interesting, eye-opening, enlightening or just plain fun! And while there are aspects of danger in virtually everything we do, the trick is to learn how mastery actually minimizes danger. Most of us learn how to walk without toppling over at a very young age, so that walking is no longer dangerous. Next we learn to negotiate stairs. Why stop there? Why not practice and become proficient at walking on the roof or walking on a tightrope? These are just a few of the Fifty Dangerous Things that we invite you to try.

Take a peek and step into a world of danger and discovery. 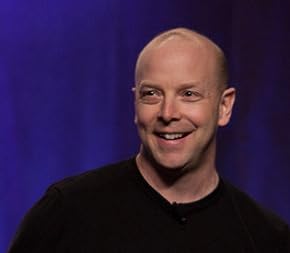 Gever Tulley was raised in Northern California, in a town that barely exists now. Casper was once a bustling mill town, but when the logging dried up in the early mid-century, the shacks that housed the millworkers became the home to beatniks who wanted to “get out of the City, man.” Thus began a childhood spent tagging along with his older brother on adventures that covered the deserted cliffs and beaches of the pre-touristed Mendocino coast.

The holder of numerous technology patents, Gever Tulley’s first career was propelled by his voracious self-directed quest for knowledge. From operating systems to compilers to CGI, he has worked in nearly every field in the applied Computer Sciences. But in 2005, he made what he often refers to as “the greatest mistake of his life” when he started a summer program for kids called Tinkering School. The school was a laboratory where Gever could experiment with new pedagogies that focussed on hands-on self-directed learning. That first year, Tinkering School started being noticed by the media and educators around the world – because the kids (ages 7 to 16) had built a roller coaster with 120 feet of track. In the years since, kids have gone on to build sailboats, electric vehicles, and even a working hang glider. But one would be missing the point if it were just about what they built, Tinkering School is giving these kids a chance to amaze themselves with what they are capable of, and to discover just how responsible and capable they really are.

In 2007 he first spoke at TED, giving a talk titled “Five Dangerous Things (you should let your children do).” The talk has been seen by millions of people around the world, and continues to be blogged and commented on to this day. In that talk he made an off-hand comment about a forth-coming book entitled “Fifty Dangerous Things (you should let your children do)” – the comment turned into a weekly in-flux of email asking where the book could be purchased. After meeting with dozens of publishers, who rejected the idea as “not kid-friendly”, he and Julie Spiegler self-published the book on Amazon – where it became an over-night sensation, stirring up the media on three continents.

This book was a blast to read and to try with my own daughters. While there were some activities that I did not feel comfortable enough to try with my three year old, my 6.5 year old was definitely game for trying out some of these things. I loved how the book was set up with easy to follow instructions, duration and difficulty level as well as a whole section on field notes for your budding scientist to explore with their own friends. I also enjoyed the resources at the end of the book with answers to the “why” question regarding why you should do these activities and the educational benefit from them. Overall, this book is a definitely keeper!