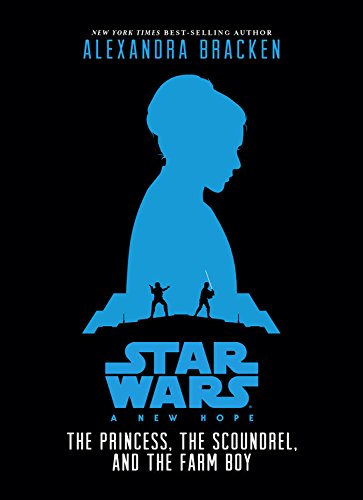 The galaxy is at war.

Although the Rebel Alliance has won a few battles against the Empire, hope is fading. The Empire is about to finish building the greatest weapon the galaxy has ever seen-the Death Star. The rebels’ only chance to defeat it now lies in the unlikely hands of a princess, a scoundrel, and a farm boy. . . .

Acclaimed, New York Times bestselling author Alexandra Bracken delivers a captivating retelling ofStar Wars: A New Hope like you’ve never experienced before. Since the premier of the original film, Princess Leia, Han Solo, and Luke Skywalker have become iconic, larger-than-life characters. The Princess, the Scoundrel, and the Farm Boy takes a deeper look at these three heroes as they join forces to defeat the evil that threatens their entire galaxy.

This is a very true re-telling of the Star Wars Episode IV: A New Hope movie! The book is geared toward grades 3-7 and gives you large words, shorter paragraphs which allows even young readers to get through the book in no time.

The book has something for everyone. You get to meet the characters that you know and love and even get to seem and know them on a bit deeper level than you do in the movie itself. The book has tons of action, drama and more and you will be reading chapter upon chapter as you try and read this all of the way through (or at least my kids did) !
The author is true to the cannon of the Star Wars world and does not take too many liberties. The book is so much fun to read as a family, but you can also read this individually too and still be entranced from beginning to end.

This is a great book that makes me want to go and watch the movie yet again!

Want to read my thoughts on the other books in the series?

New to the Divadom?

Questions? Drop me a line at [email protected]