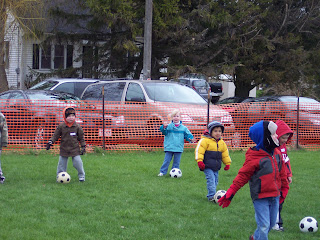 So Diva-J has always been a physical girl and has loved to be outside and has loved playing ball with Dad ever since she was able to walk. A few months ago we got her into a soccer class within the YMCA and she just loved it and thrived in the class. So a few weeks back the class went into a new term and we went from being inside to being outside.

Now Wisconsin, at least Northeastern Wisconsin is not know for having much of a spring. So the first week we are out at soccer clss it is in the upper 30’s and the kids are freezing. The second week it is in the upper 40’s and raining. So far this is not boding well for dad who is the one bringing Diva-J to the class.

Above and beyond the weather woes…I have always tended to wonder why the term Soccer Mom came to be known as such as I see many dads who are there with their children, and not just Moms. What about the term Soccer Dads? Does the term Soccer Mom refer again to the fact that American society tends to see Mom as the primary caregiver of children in families? I did a quick Google of this and found in a defintion in Wikipedia.

The term has been traced to Ludlow, Massachusetts, where a report came out that a man absconded with $3,150 raised for the benefit of a local soccer league. It is unclear whether a newspaper story or a television news report was the first to use the term.[1] The term came into widespread use in the 1990s, notably during the 1992 and 1996 presidential campaigns and has been in use ever since.[citation needed]

In a literal definition, soccer moms have children who play soccer. The term has been extended in popular culture to include mothers anxiously running their children errands in oversized SUV vehicles while chatting on their cell phone. To some extent the phrase has begun taken on a negative stigma. Nissan, who had for several years courted the “soccer-mom” image, repositioned its Quest minivan as “stylish, sexy and desirable” [2].

Well… needless to say I a a Soccer Dad and spend my Saturday mornings thoroughly enjoying watching my eldest having fun on the soccer field with the other little kids… So power to the dads out there who like me are supporting there kids and are having fun in the meantime!