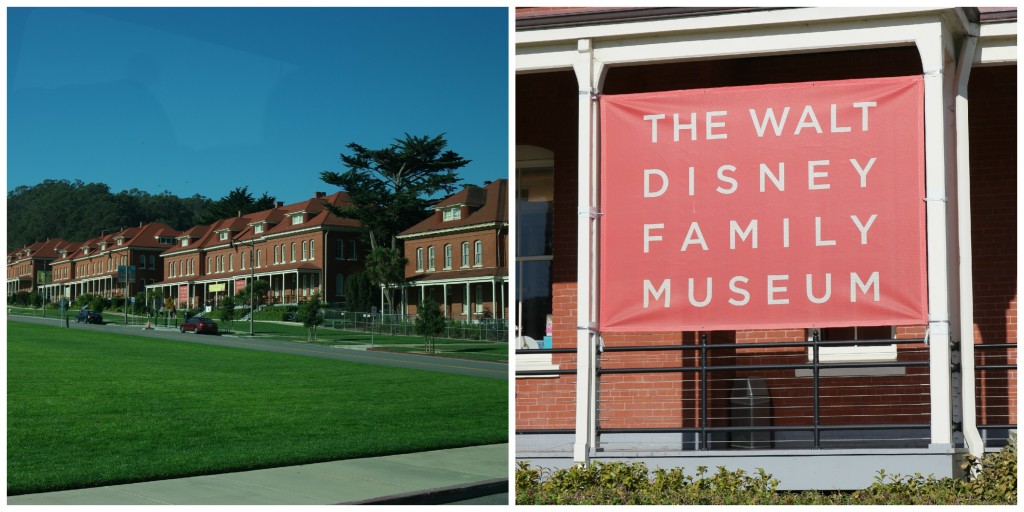 I have been in awe of the life and body of work, as well as the legacy of Walt Disney. I have read books about him, learned about his life as well as the high and low points of his life, and this was before I stepped foot in the Presidio district of SanFrancisco. Because of the admiration I have for the man that built an amazing company and left legacy larger than most, I wanted to learn more and I was excited to have the ability to go to this museum to learn more.

The Museum itself is located in the Presidio district of SanFrancisco. If you have never been to this part of the city, it is right next to the Golden Gate Bridge and it is gorgeous. From everything that I have read, this is a closed area that you cannot actually live in, only stay in overnight. When you drive up to the building your eyes are drawn to the red facade of the building that is very distinct. 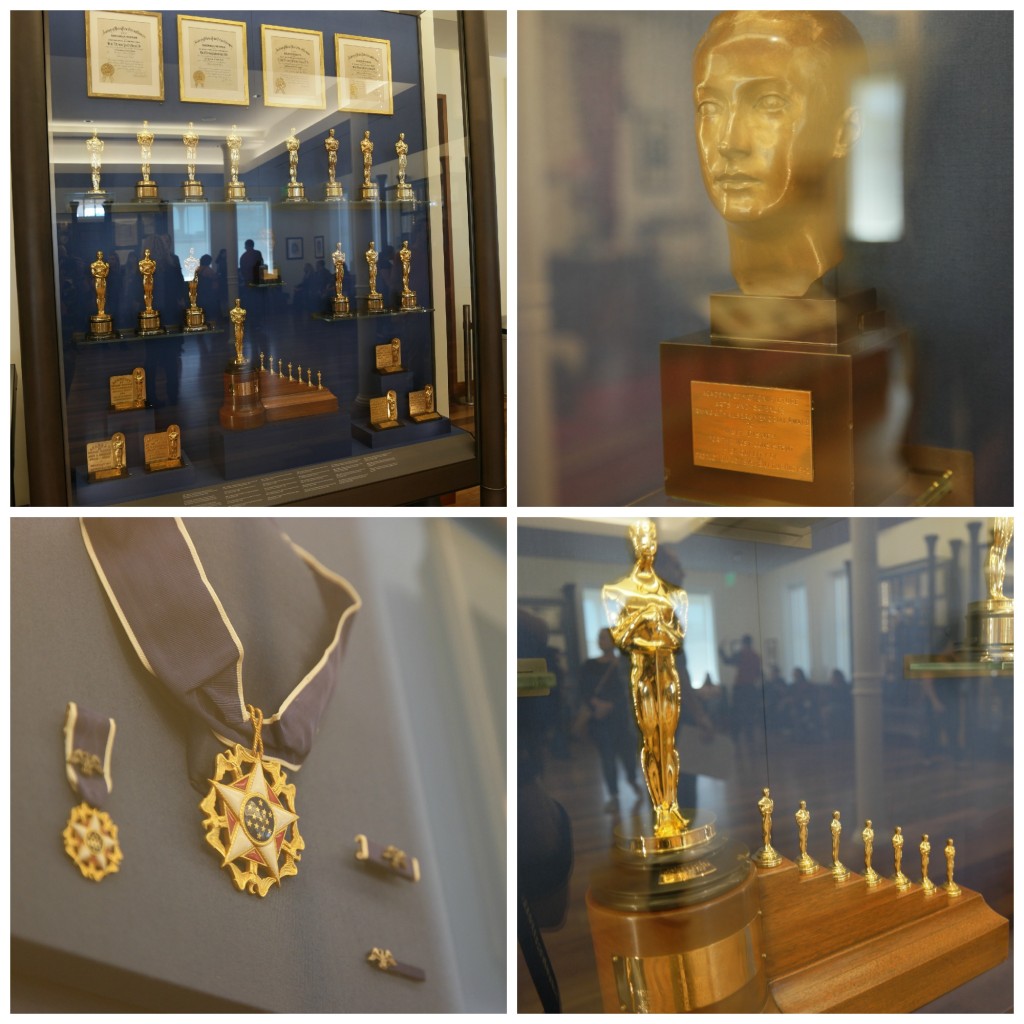 As you walk into the museum you are met by Walt himself and then you have the ability to start exploring many of the awards given to Walt Disney throughout his life and career. As I was waiting for our tour to start I came to learn that Walt Disney had received 900 awards in his life and 250 of them were in the museum itself. On top of this the two awards that I thought were the most amazing to see were the Congressional Medal of Honor given to Walt Disney by Lyndon Johnson and the Oscars given for the many movies that he worked on including the one for Snow White and the Seven Dwarfs. 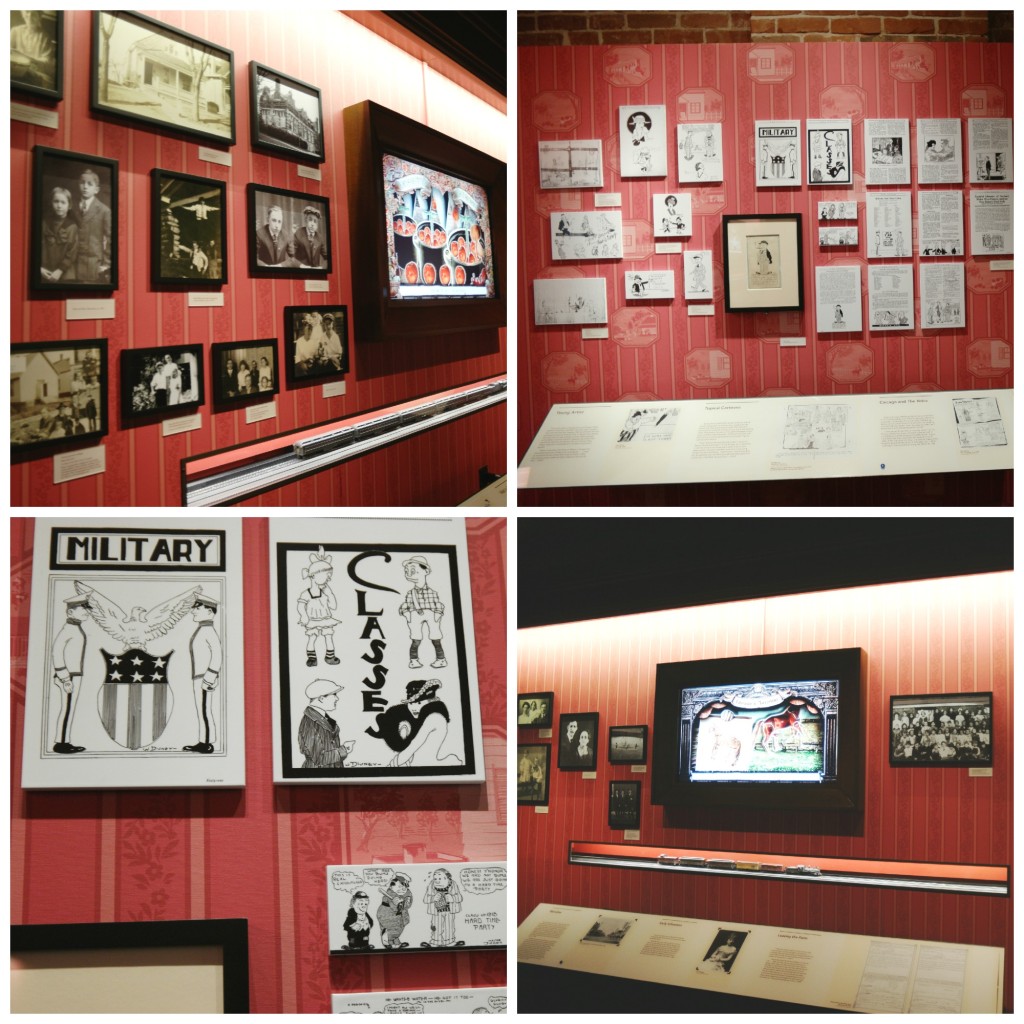 As you start the exhibit you enter the early life of the Walt Disney. You learn about his birth in Chicago in 1901, his family moving to Marcelene, MO and the Kansas City and how each of these moves started to hone him to be the man that he became. I loved seeing the actual comics that Walt Disney drew for the McKinley High School publication which were on display.

You continue to learn about the forging of his birthdate so he could be considered for the war effort. BY doing this he was cleared to go to France and be a driver in the Ambulance Corp. I enjoyed learning that he would draw cartoons on the side of his Ambulance and make cartoon drawings to entertain the troops while over in France. 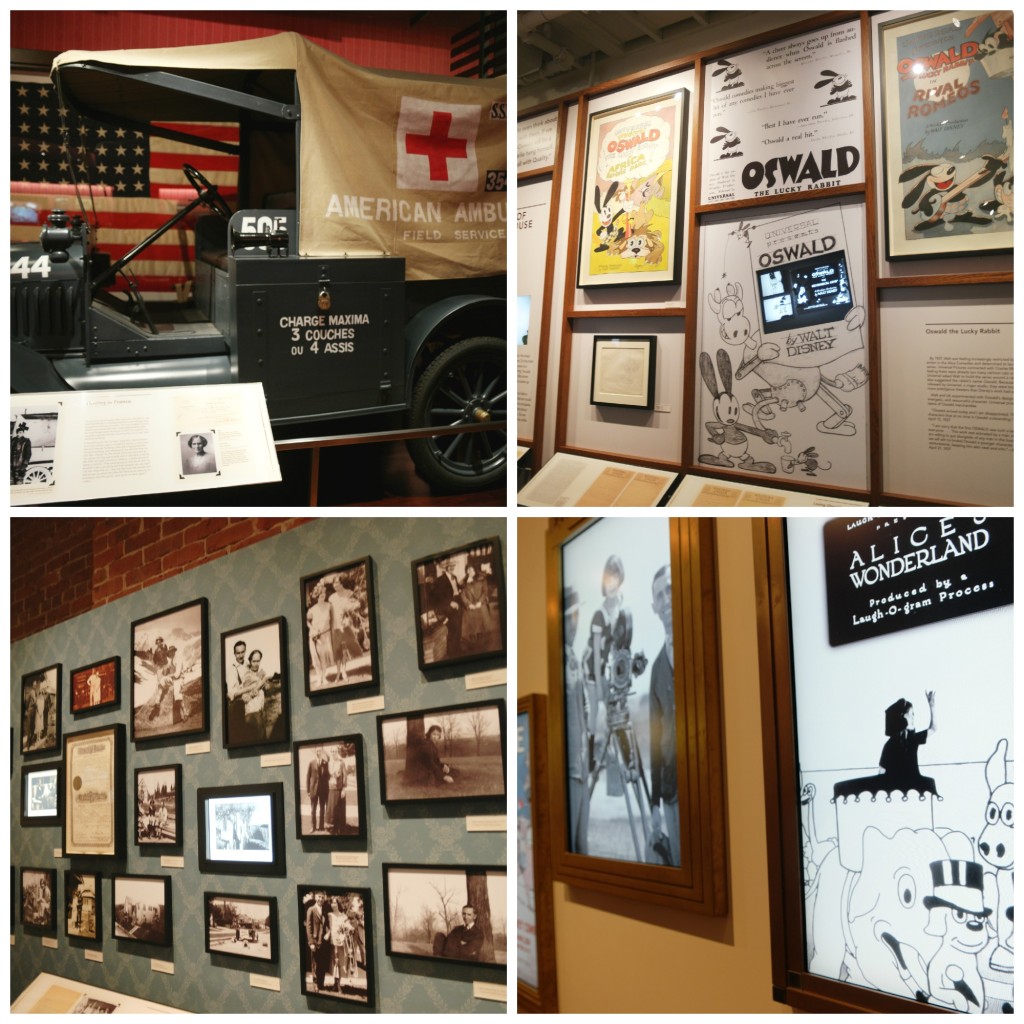 As Walt came back from France, he started working more heavily in animated films and moving -pictures and the next part of the museum talked about his early career in the business. It talked about his failures, such as Laugh-a-gram films to his early successes with the Alice films. You follow his move to California and start to see the amount of creativity and ingenuity that he had to get his Disney Brothers Company started. 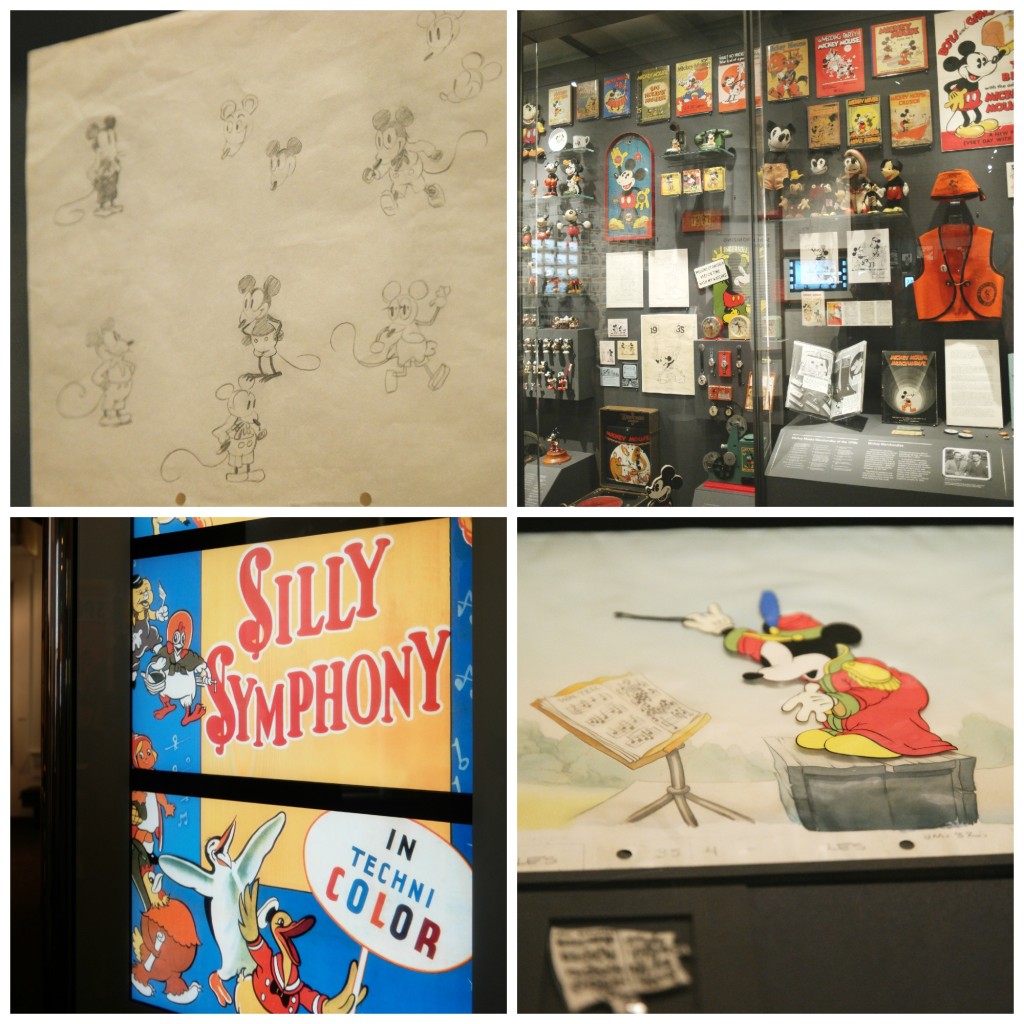 The museum continued on and you learn more and more about things like Oswald and then the eventual scandal that led Walt Disney to making the choice to leave Oswald behind, creating Mortimer Mouse (Soon to be Mickey Mouse) on the train ride back from New York City (after relinquishing control of Oswald). 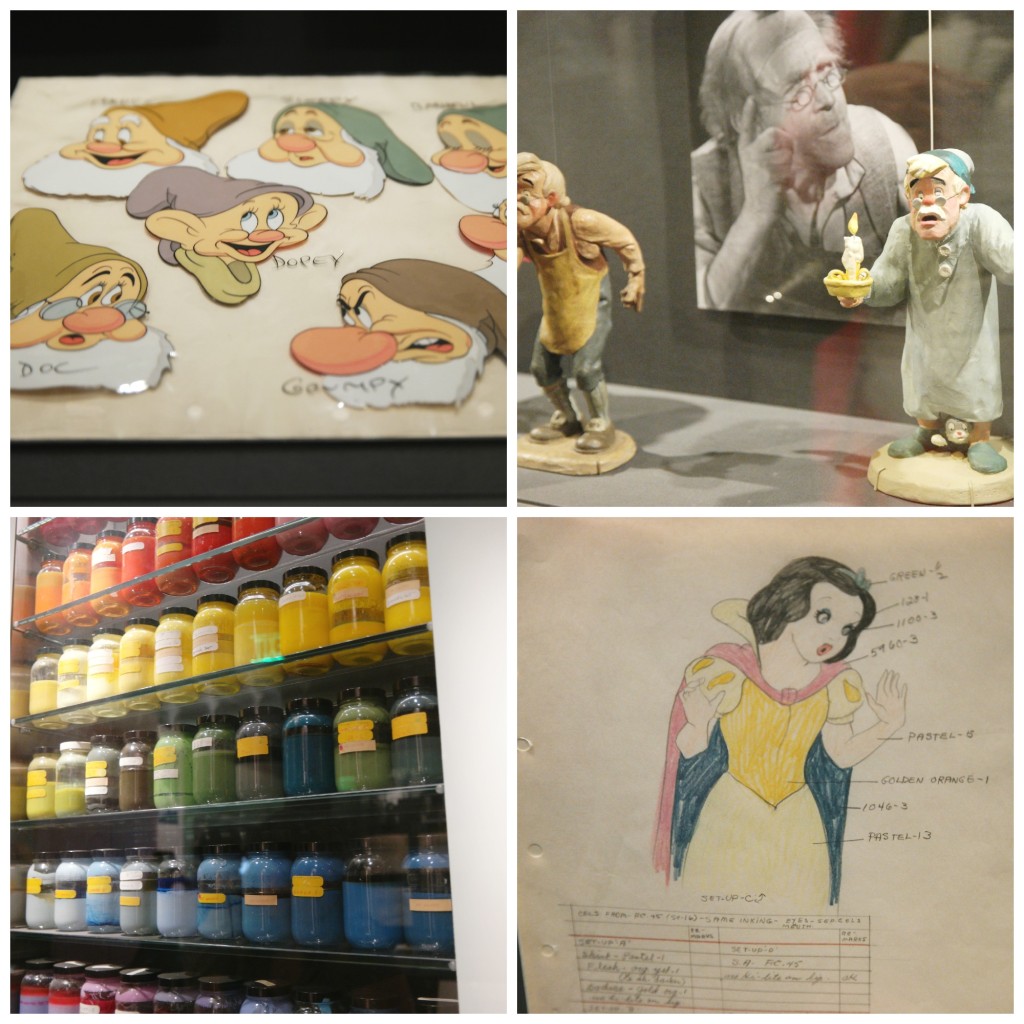 There were some beautiful initial drawings that Walt drew by hand on display. The image below is one of these. It was images like this that made this trip truly special as they are things you will not see anywhere else.

As Mickey developed and they created the short, Steamboat Willie, everything changed and the company was moving full force forward.

I continued to explore, seeing so much and learning more and more about the process of creating shorts and then animated films. You even get to see some of the original artist renderings for some of the films with notes form the animators too. 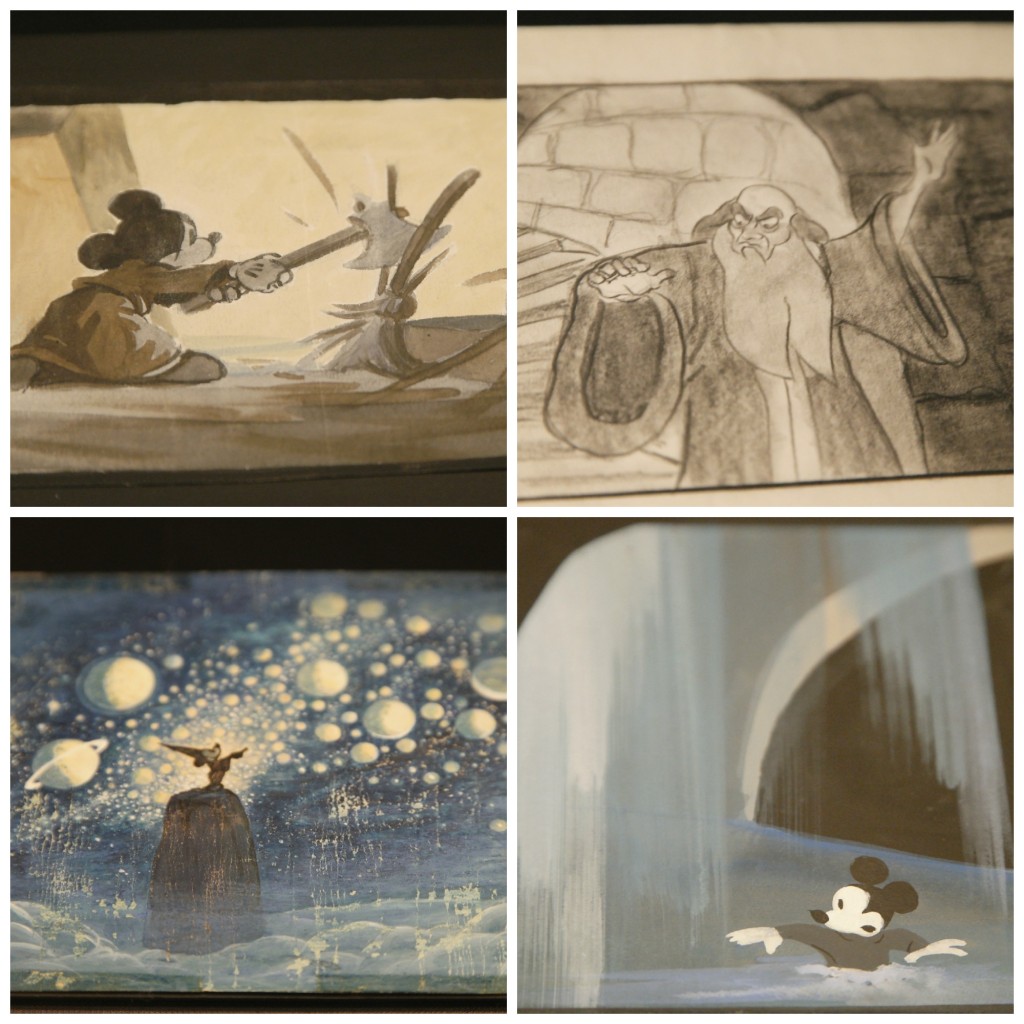 As you continue on through Walt Disney ‘s life you see the changes in technology that ended up allowing Walt Disney to continue to grow the company and change the game and push the gauntlet of creativity on his films. Whether this was through motion, color, sound or more, Walt Disney was never afraid of trying something new that would move the company and the animation field forward. 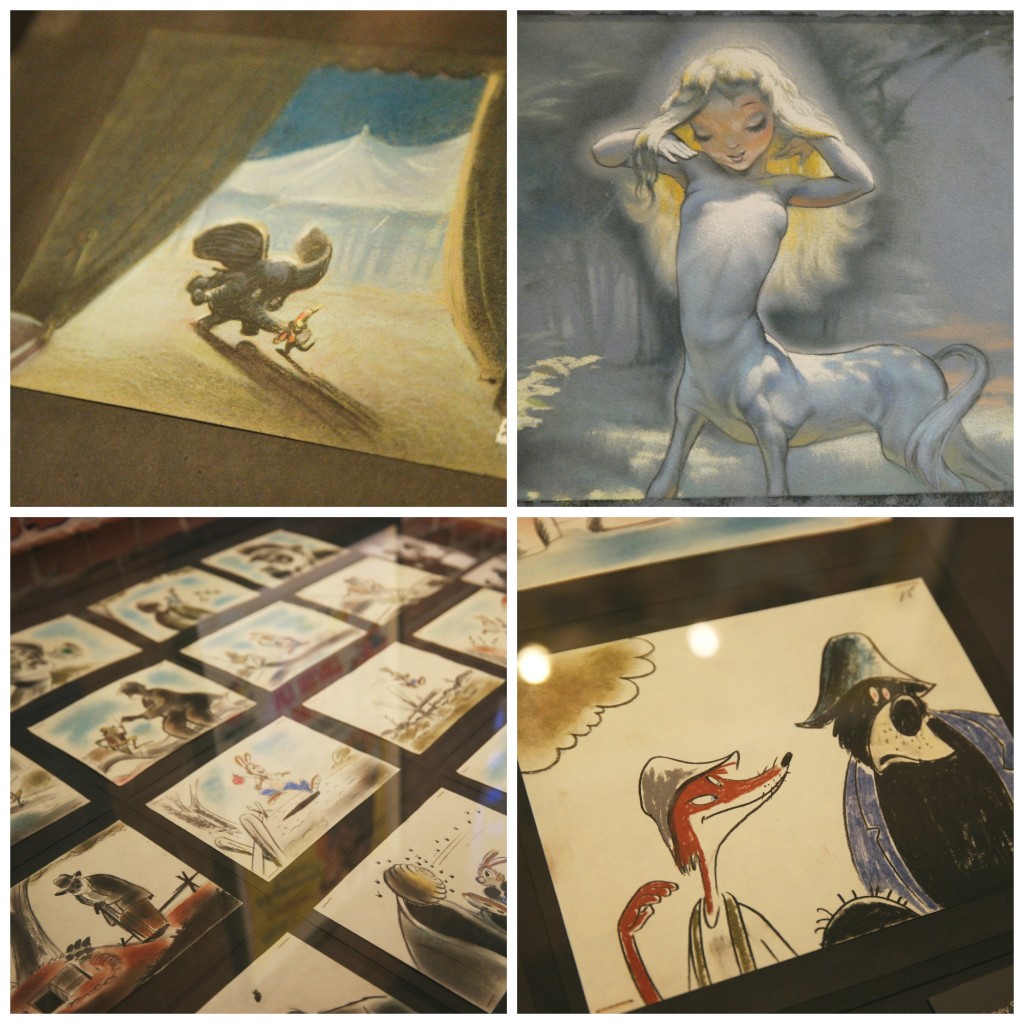 Now, the Walt Disney Family Museum was not all about the movies or about Walt Disney ‘s animation. While this was a large component of the exhibit, there is also a lot about Walt Disney as a man and as a father. You see many touching images of him being a dad to his girls. You also learn that his favorite foods were Chili and Jello and that he loved miniatures and even thought of creating a traveling display of miniatures that he would build / create called Disneylandia, but this project never got off the ground. 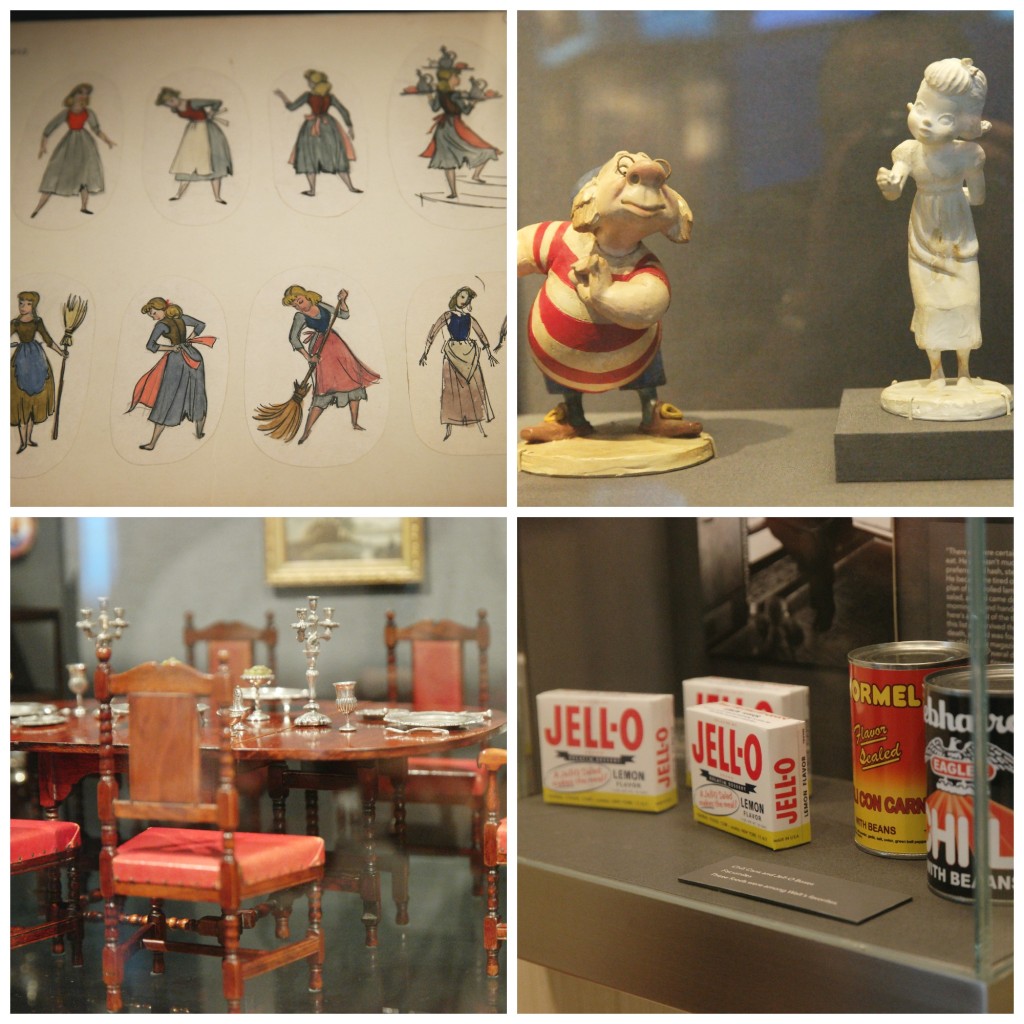 Walt Disney loved nature and one of the move breathtaking views of the museum is on the back side of the museum where you are confronted with an entire wall of glass that looks out at the Golden Gate Bridge. The view is spectacular and while you are seeing this you learn about Walt Disney and his documentaries and how he tried to bring together nature and people. 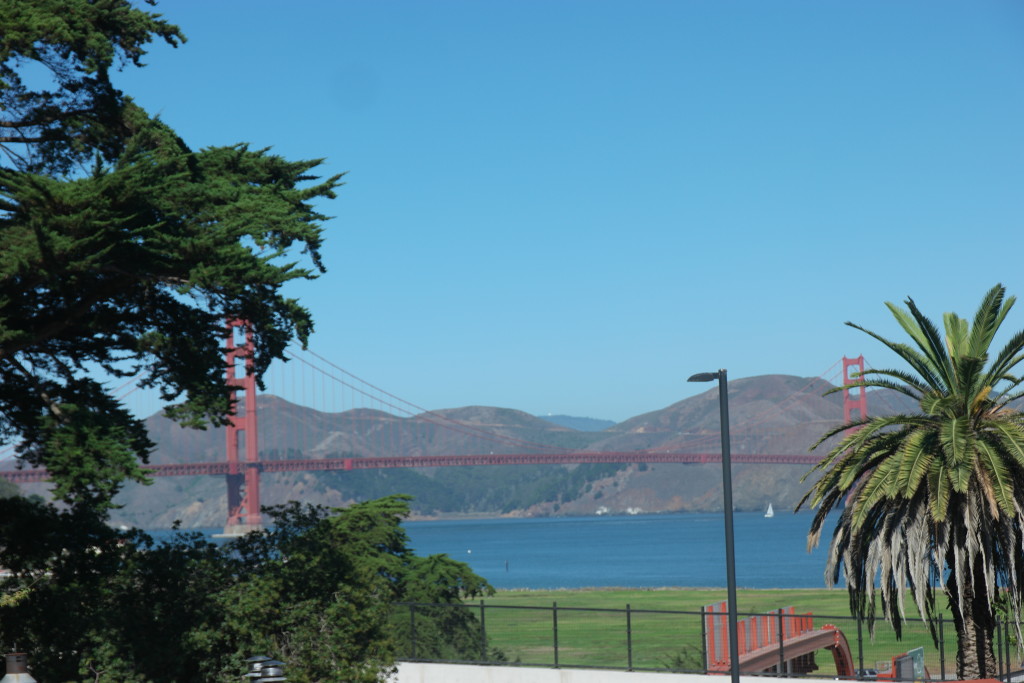 The museum concludes with a large section about the creation of Disneyland as well as the events that led to his death and the world’s grief at his passing. 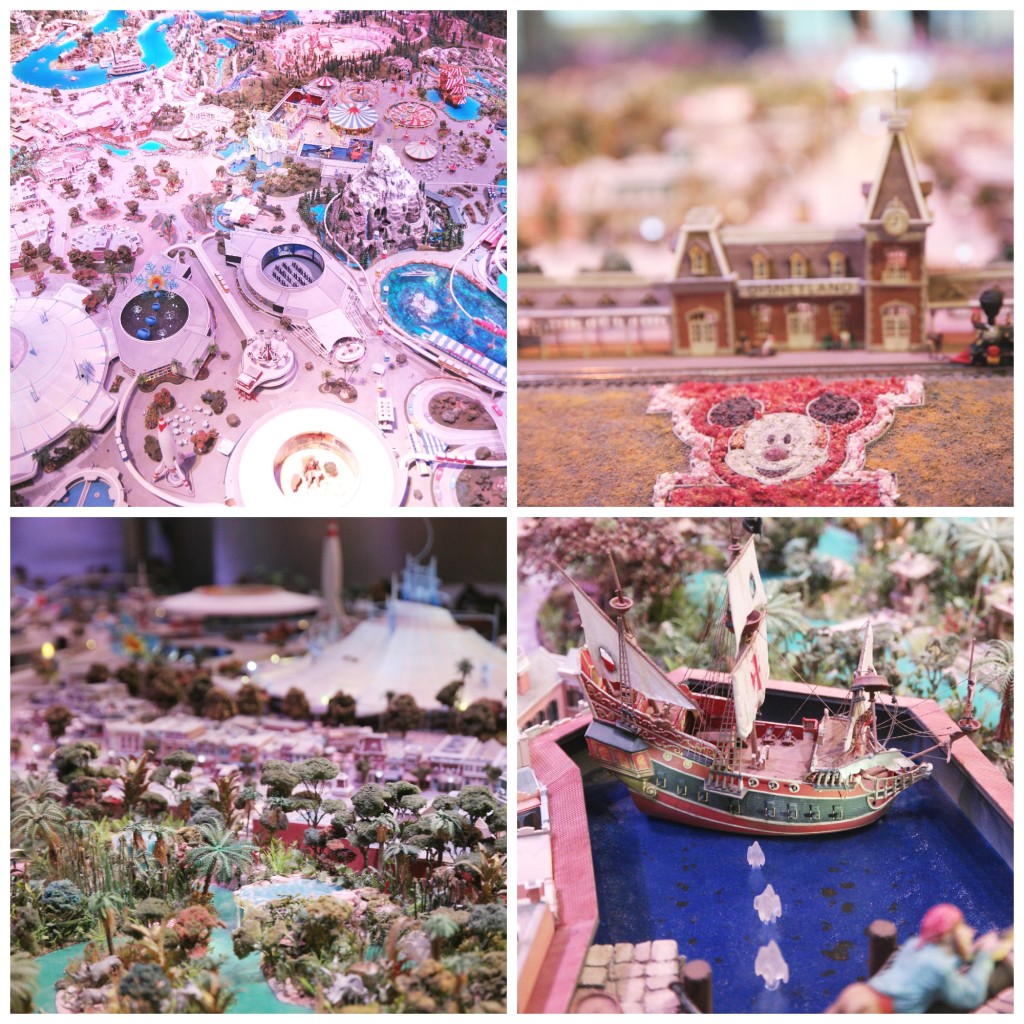 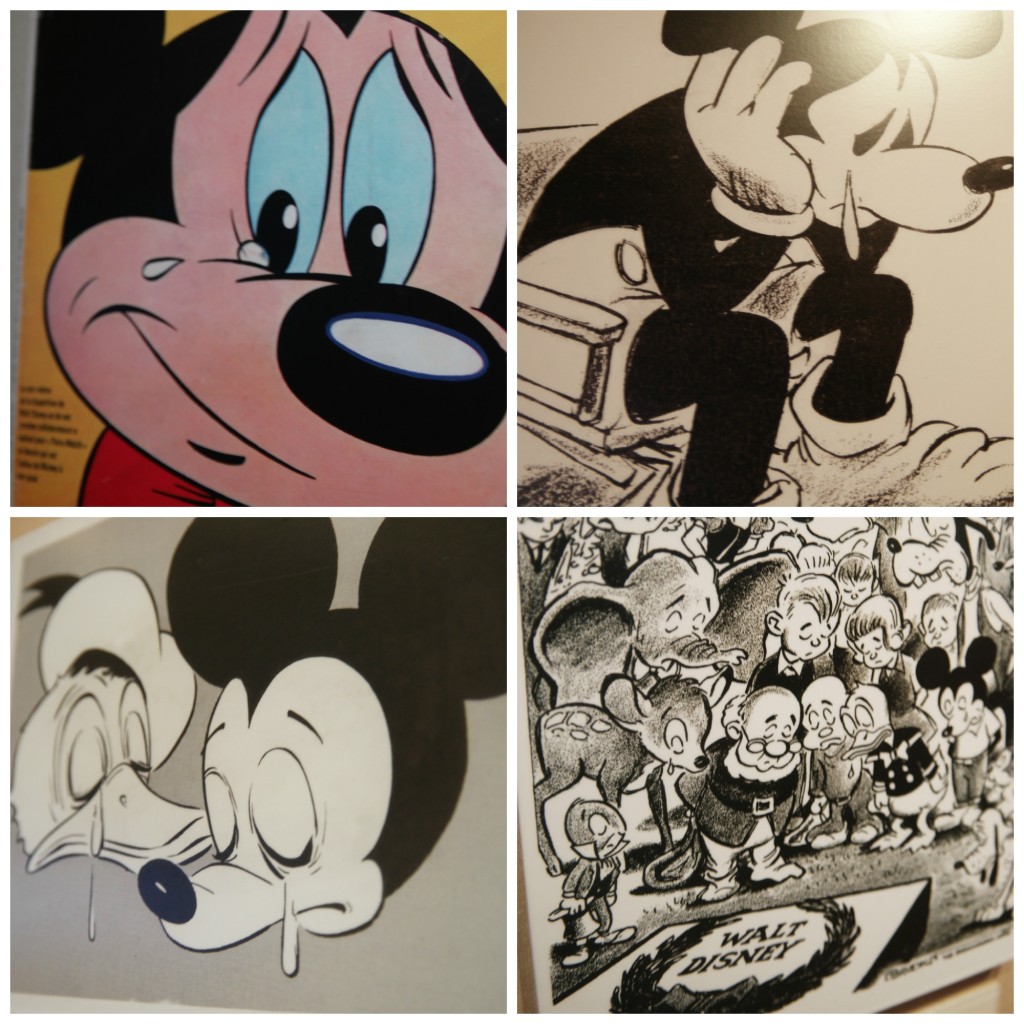 In all this was a great tribute filled with amazing artifacts about an inspirational man that is beloved. If you are a big fan of Disney like I am, and are ever in San Francisco. It is worth it to take the time to come to the Walt Family Museum to experience this for yourself. Just make sure to give yourself enough time to get through everything. There is a ton to see and take in and you want to make sure that you don’t miss anything!