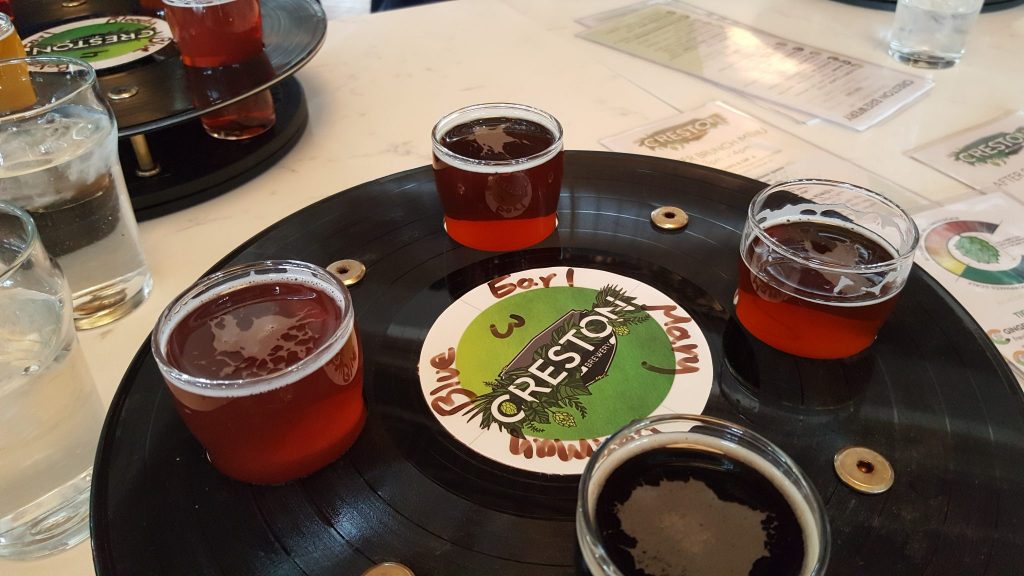 Today was Day 2 of my Beercation in Grand Rapids and we visited a ton of breweries including: the Grand Rapids Brewing Company, New Holland: The Knickerbocker, Harmony Hall Brewery, City Built Brewing, Creston Brewing and Hopcat  thanks to Man Tripping and Experience Grand Rapids.

All of these locations were different from each other and bring unique beers to the forefront of you palate. Let me tell you a bit about each! 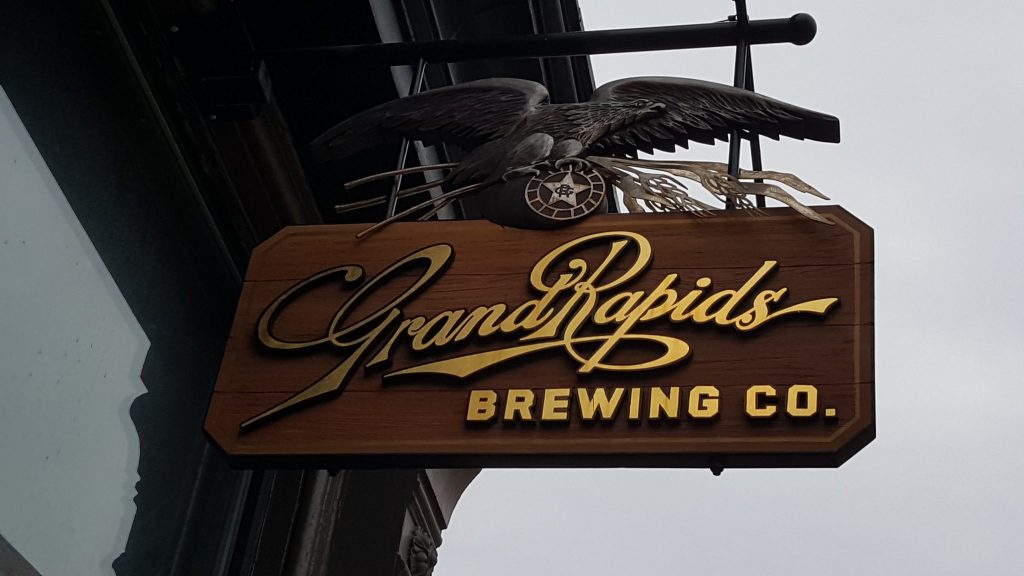 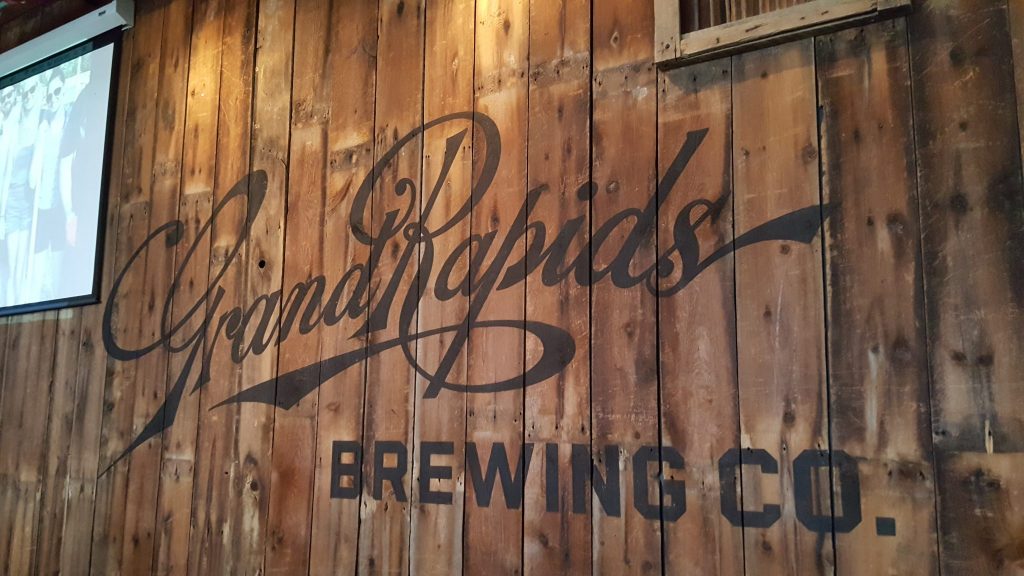 We started the day at the Grand Rapids Brewing Company. This Brewery is probably the brewery that has the longest history within Grand Rapids. This brewer has a history that goes back to 1893. The brewery was in business for a number of years until prohibition when it had to shut down. The brewery was closed for a number of years until the 1990’s when it re=opened for a number of years and then closed again until it was rebuilt in downtown Grand Rapids by Mark Sellers. What I was impressed with was that they had a wide array of beers including the beer that has been with them since the 1890’s (Silver Foam). In speaking to employees at the Grand Rapids Brewing Company their hottest sellers today are Roslynn Bliss and the new Peach Sour beer. While you will not find their beer in the local grocery store you can buy a growler or a bottle of beer in their restaurant. They let me know that they usually make about 1000 barrels of beer every year. 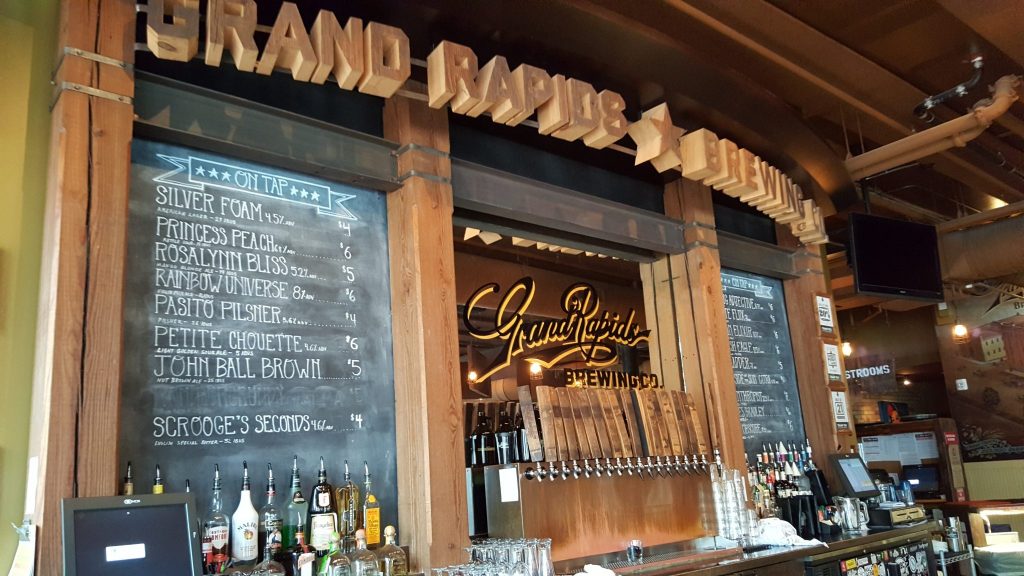 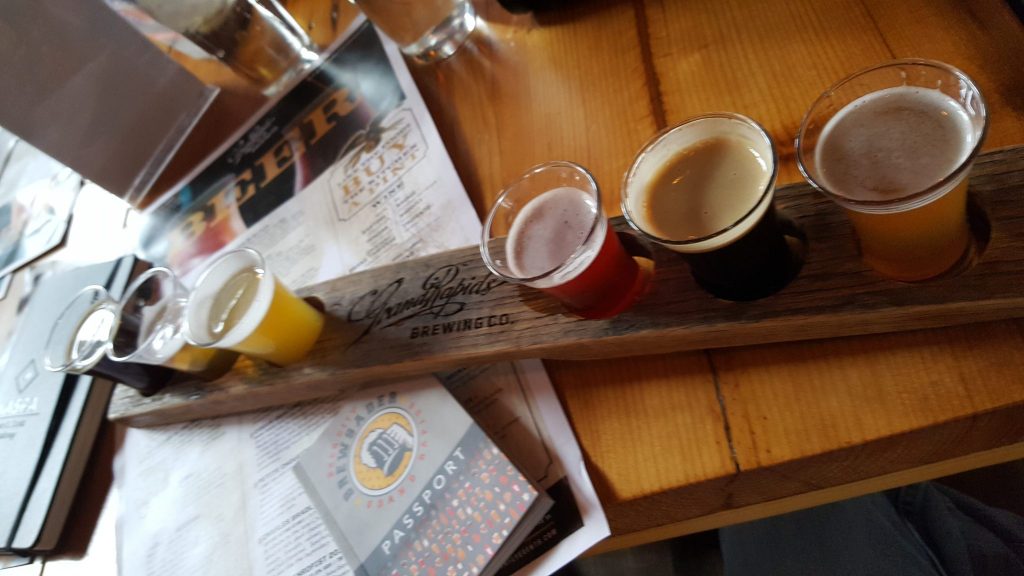 After visiting the Grand Rapids Brewing Company we went over to the New Holland Knickerbocker location. This is a very large location that is a beautiful building. Whether you are looking for beer, food, or New Holland gifts you can find it here. New Holland is known for its’ Dragon’s Milk varieties. I decided to try out the Flight of the Dragon even though I did not realize that each of the varieties were over 11% ABV. 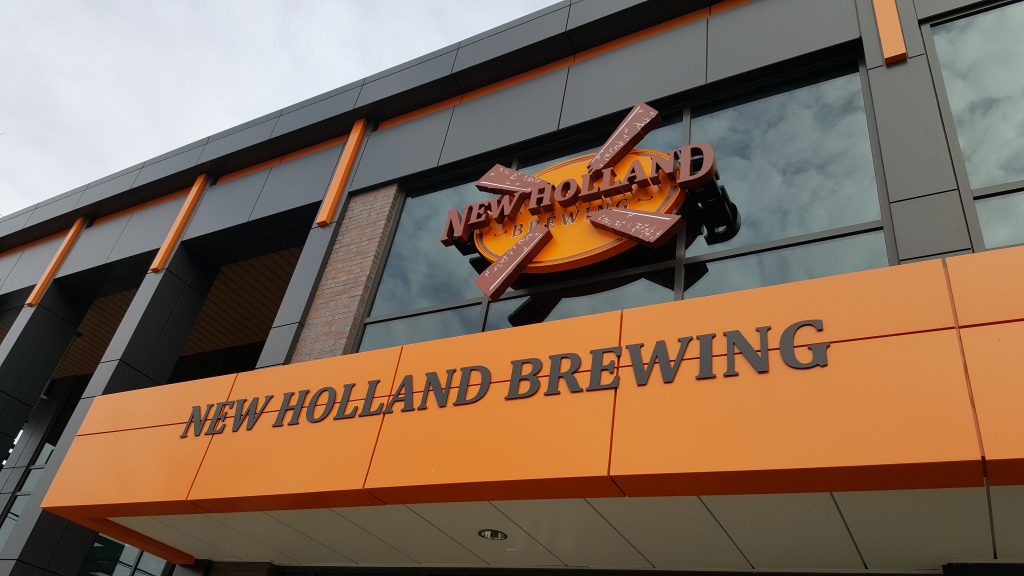 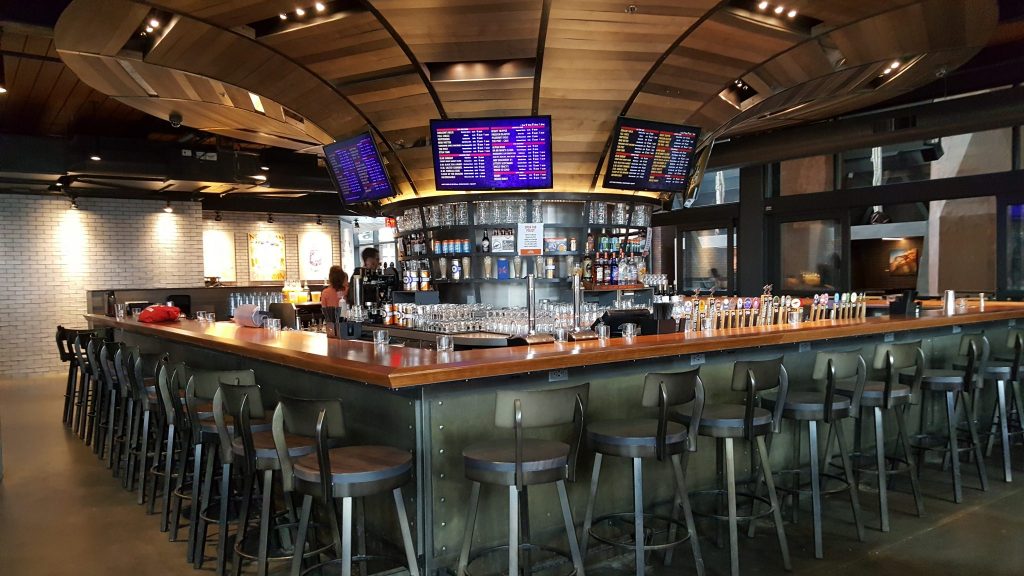 In speaking to our waiter he let us know that New Holland has been brewing since 1997 when they first started brewing Mad Hatter. It was 2001 when they started brewing Dragon’s Milk and 2005 when they started their distillery. They now are distributing to 14 different countries and brew over 50,000 barrels a year. I also was informed they New Holland is the largest whiskey distiller in Michigan. In trying the Flight of the Dragon I have to say that the Dragon’s Milk and the Salted Caramel Dragon’s Milk were definitely my favorites. 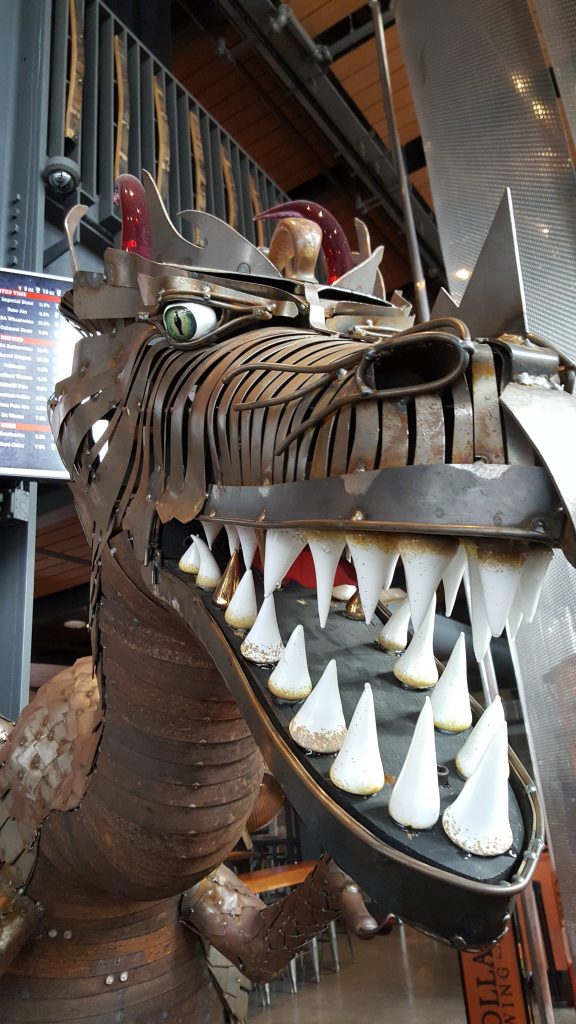 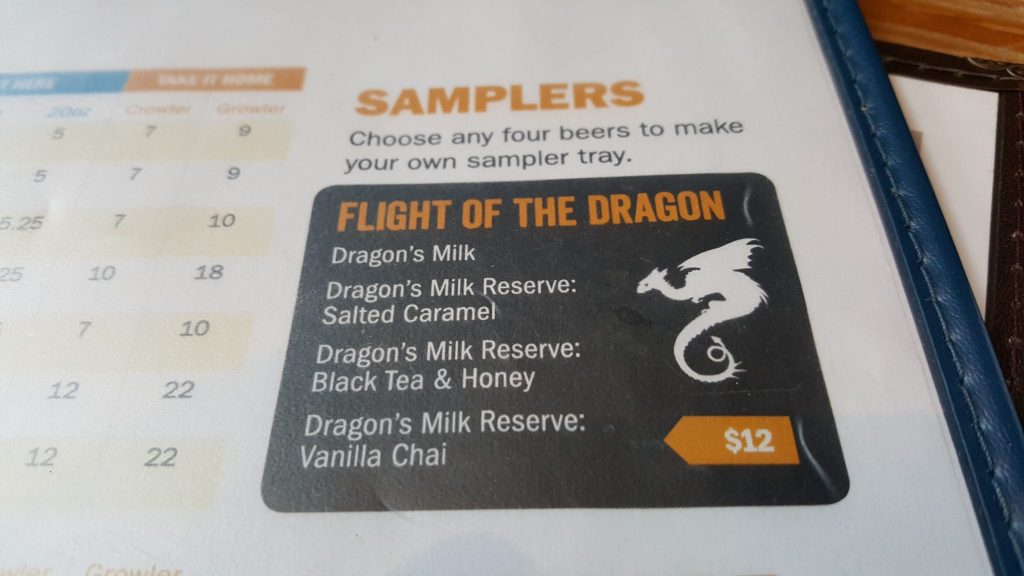 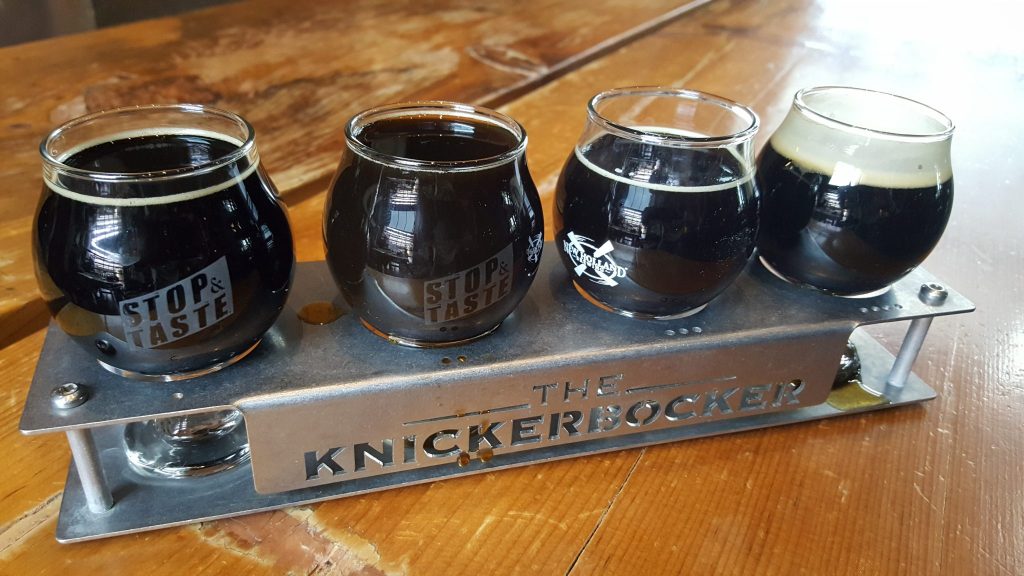 After visiting New Holland: Knickerbocker, we headed to Harmon Hall for lunch and some beer (of course). What was nice was this was right down the street from New Holland. Harmony Hall is known for its’ history as a sausage factory as it started as this back in 1908. 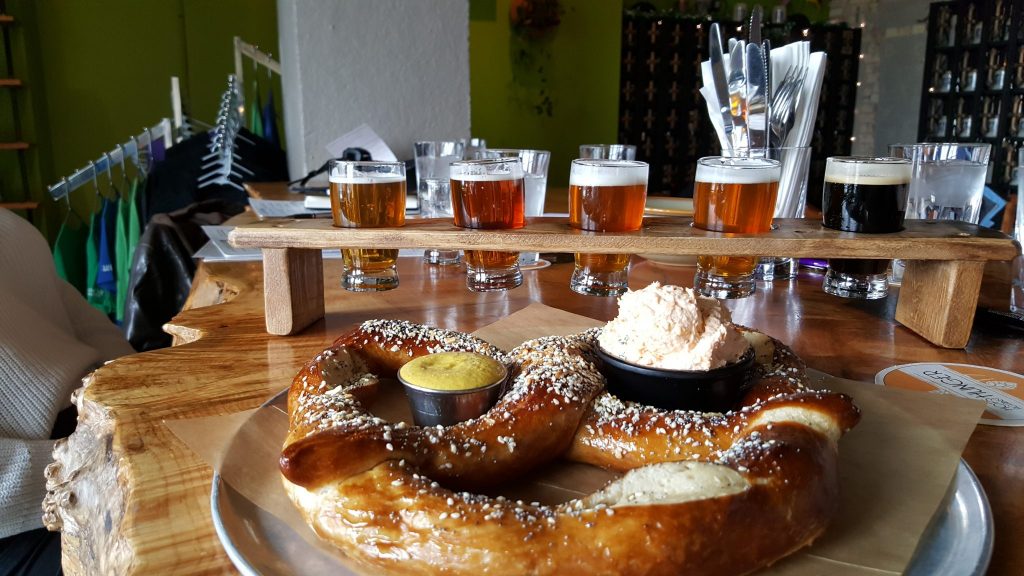 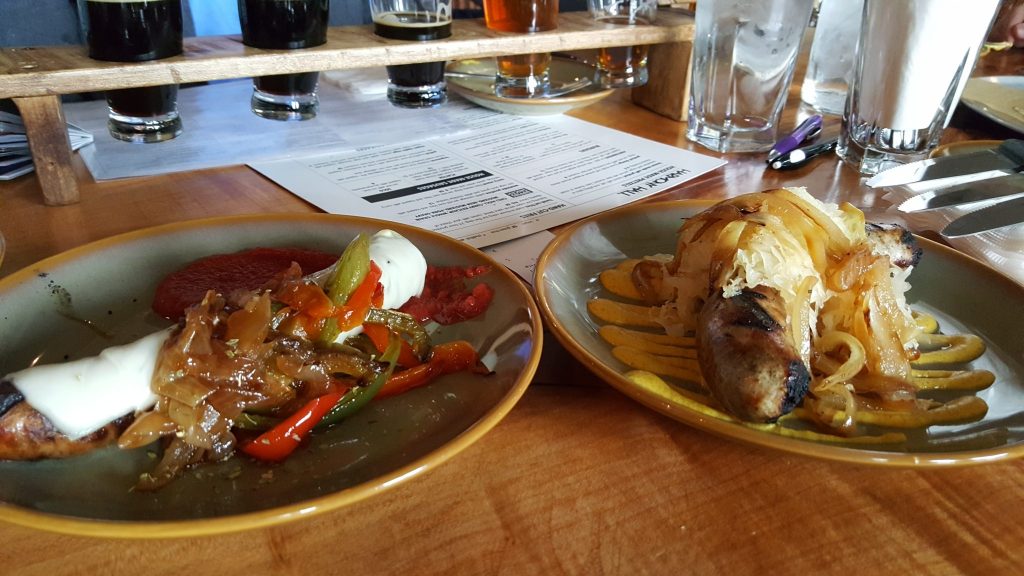 As part of our lunch we ended up trying a few of the sausages and I will say they they were amazing! Starting in 2015 Harmony Hall started getting known as a Beer Hall and with two locations they have some great brews on tap here and they create about 845 barrels a year. Some of their most popular brews include Fiddlesticks, Lovely Day IPA, Toupoulo and the Crossroads IPA. I tried a few of these but also a few others and I was impressed with all of the ones that I did try. 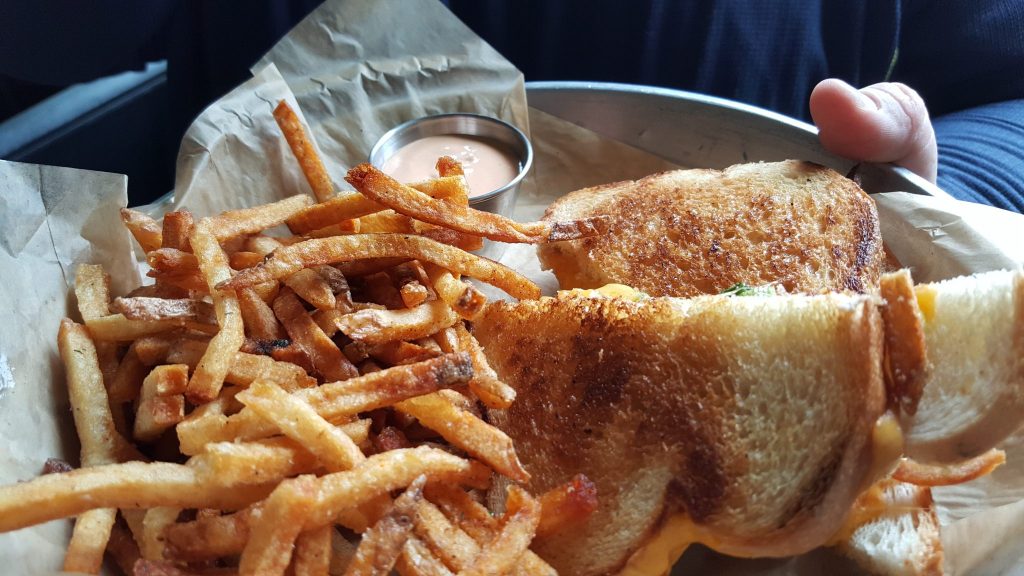 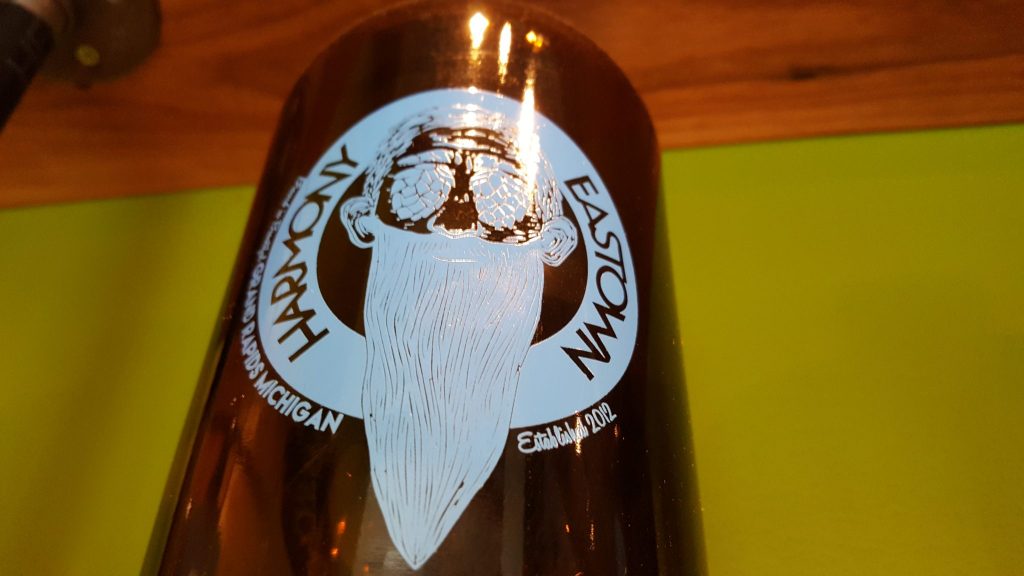 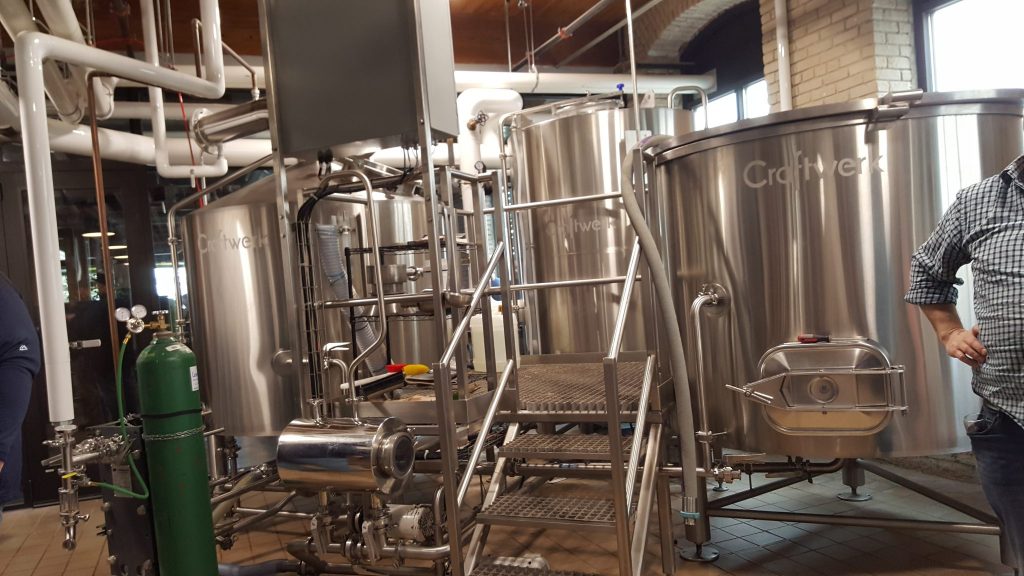 We also got to check out their brewery and we were impressed with the way that they do brew. We were informed that it is a family affair with two brothers and a sister that started and run the business!

The food that we had here (outside of the sausage) was remarkable. The grilled cheese was something I would recommend to all! 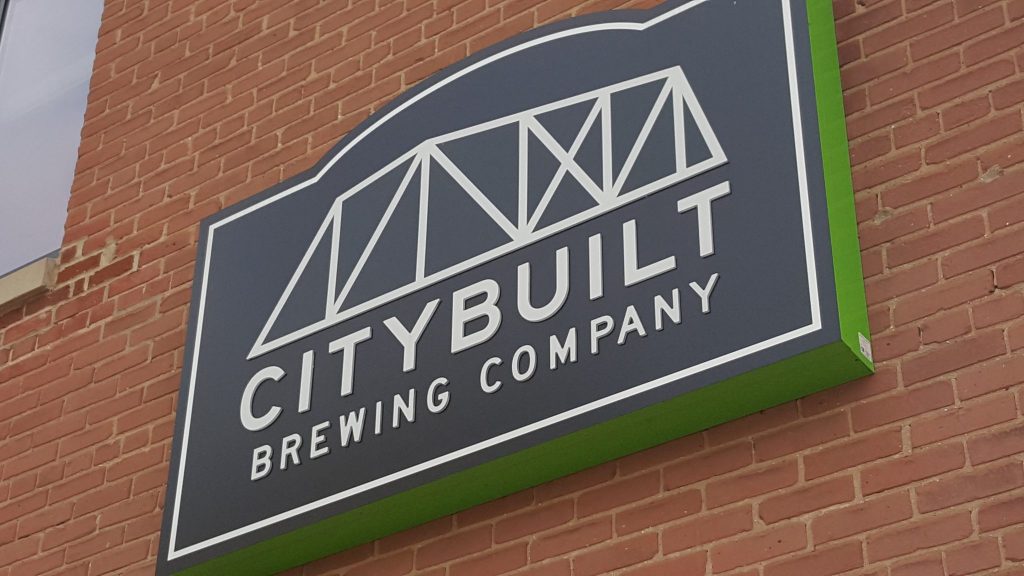 After Harmony Hall we next visited City Built Brewery. This brewery is located on the north side of town in a neighborhood that is definitely building up. As we walked in we were surprised to find how busy it was. The menu has a Puerto Rican flair and the beer list is quite eclectic. City Built opened in 2017, but the owners both had a 20 year background in brewing and brought that to this venture. 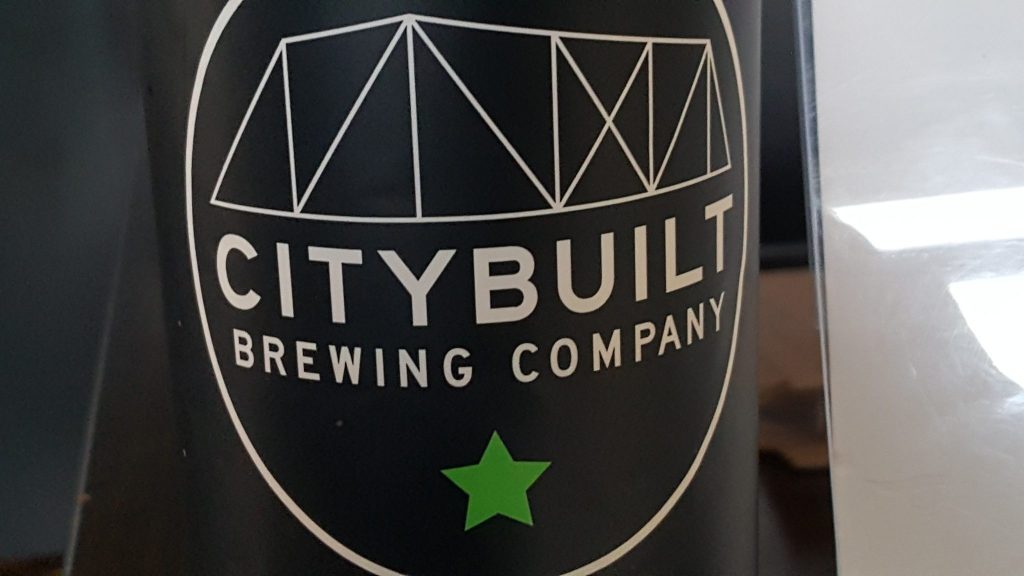 While they are only making about 520 barrels a year, the beer that they are creating is unique and offer any beer aficionado a variety that they will want to explore. Also, not only are they brewing in Grand Rapids, but they are also now brewing in China and Japan. 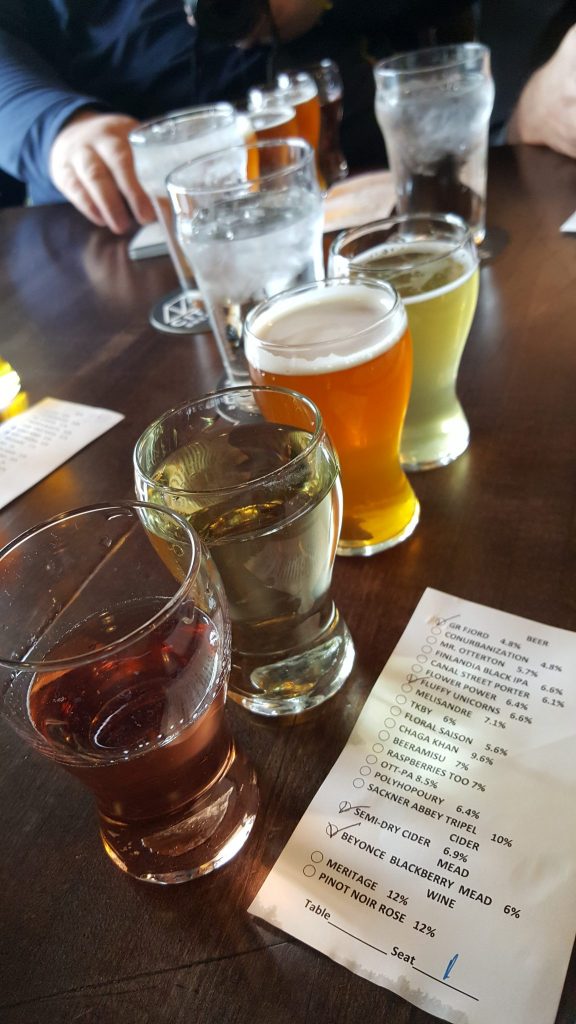 The beer itself was very tasty. I found that there was a Beyonce Blackberry Mead that was my favorite of all that I tried, though all were very good! 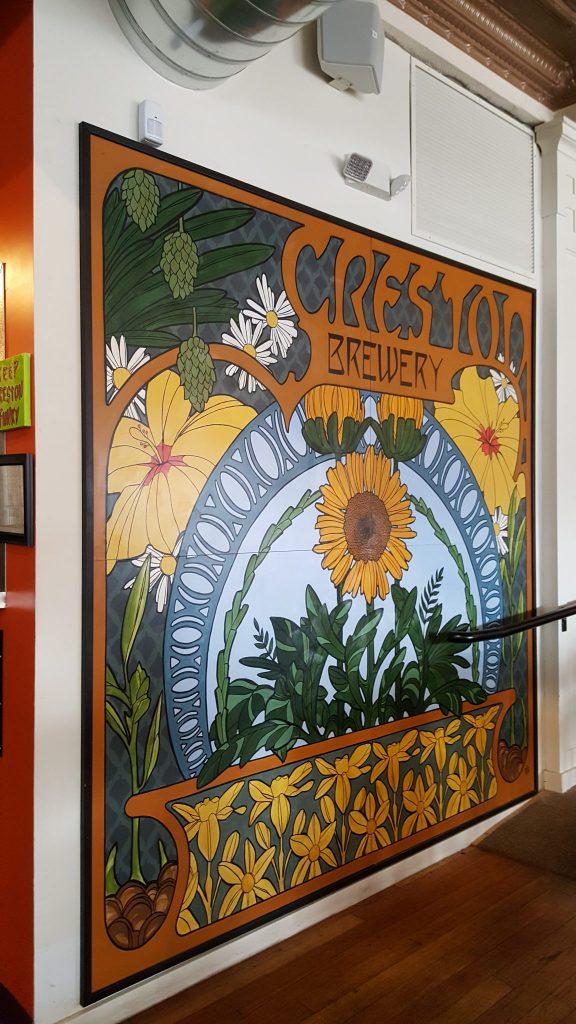 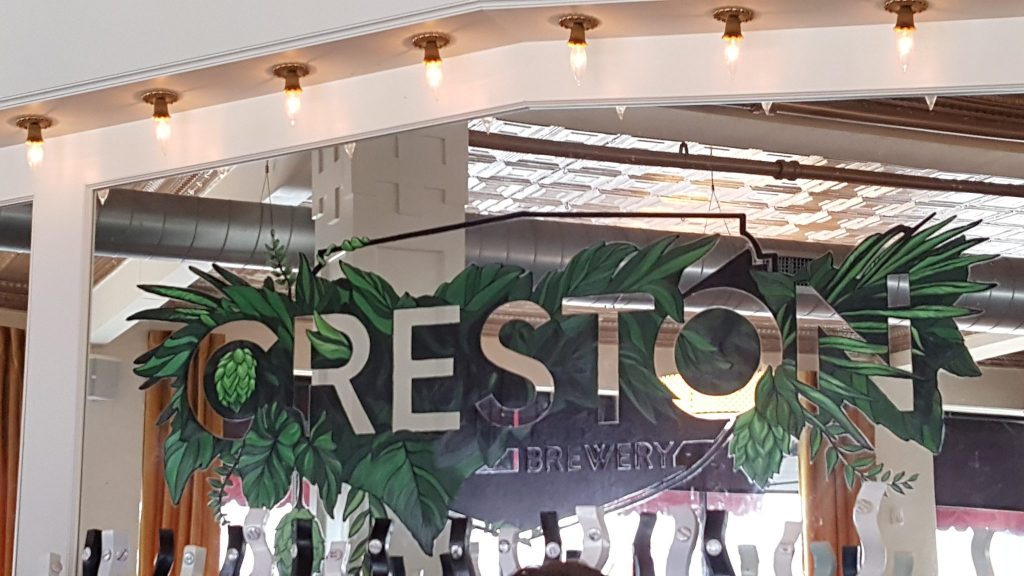 From City Built we ended up going a bit further north to the Creston Brewery. This also was very busy for an early afternoon visit. While we did not try food here we did try the beer and we were very impressed with the variety and the taste of the beer. We did not get to see the brewing facility itself, but with the large number of people we could tell that this was a very popular location! 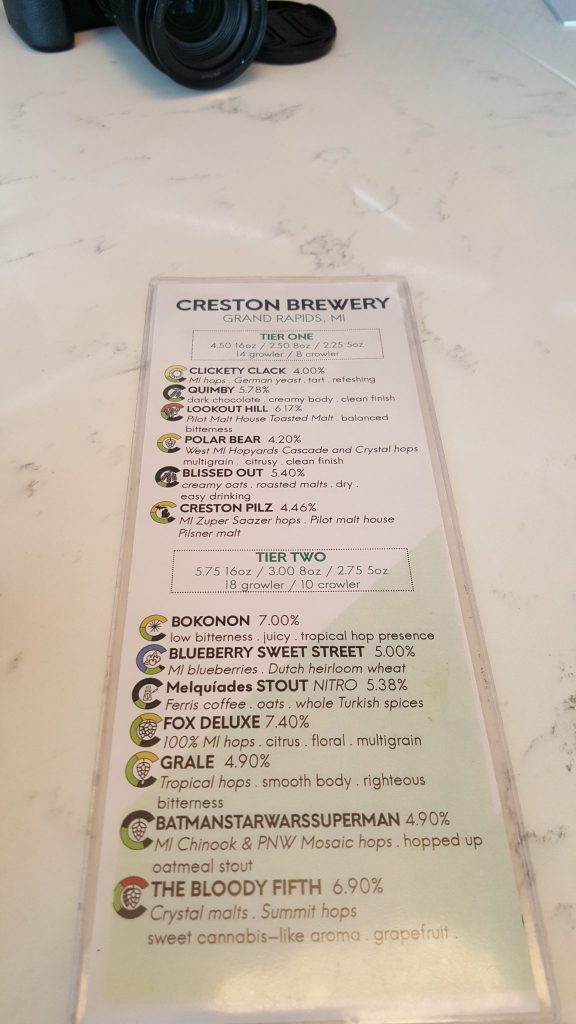 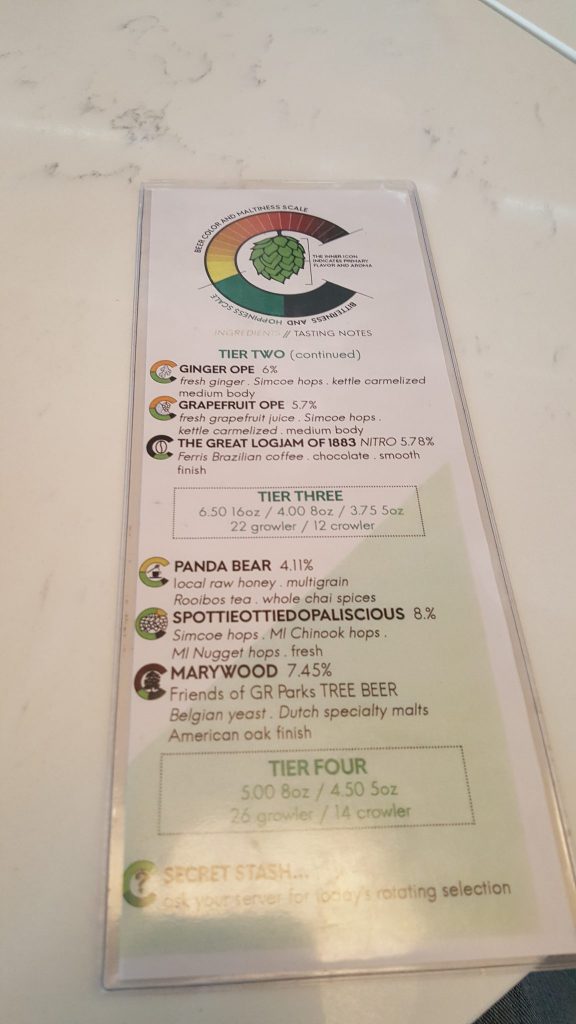 For me the Blueberry Sweet Treat was probably my favorite beer. I say this even though all of the varieties were very good. I will say that even though I tried a wide array, I did not have any that I did not like! I also loved that the flight that we had came in a record! 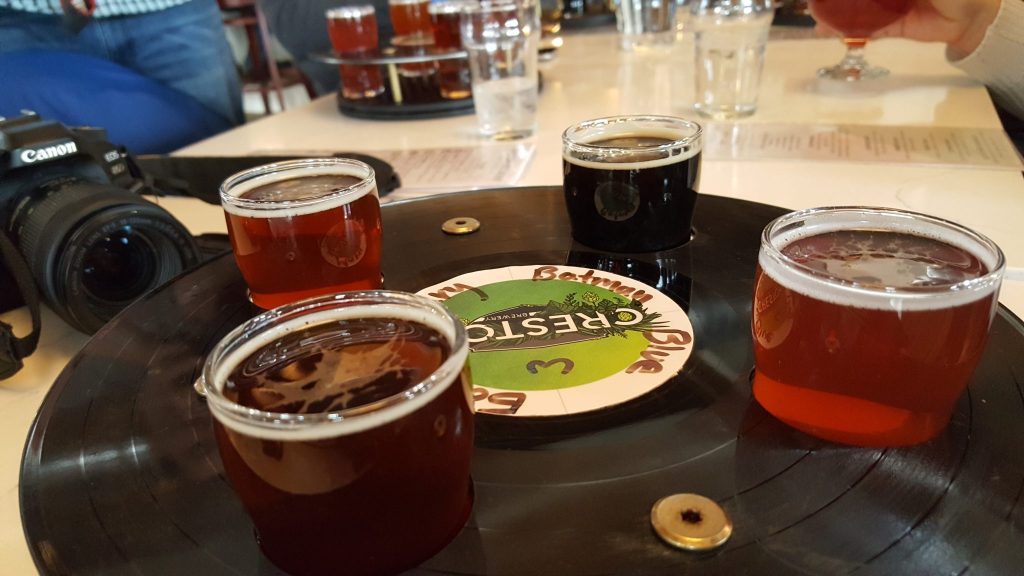 Our final stop of the night was at Hopcat. I had been at the Hopcat in East Lansing in the past, but it was a ton of fun to go to the original location in Grand Rapids and let me tell you, it did not disappoint. The place was the most packed of any of the breweries that we visited during the day. 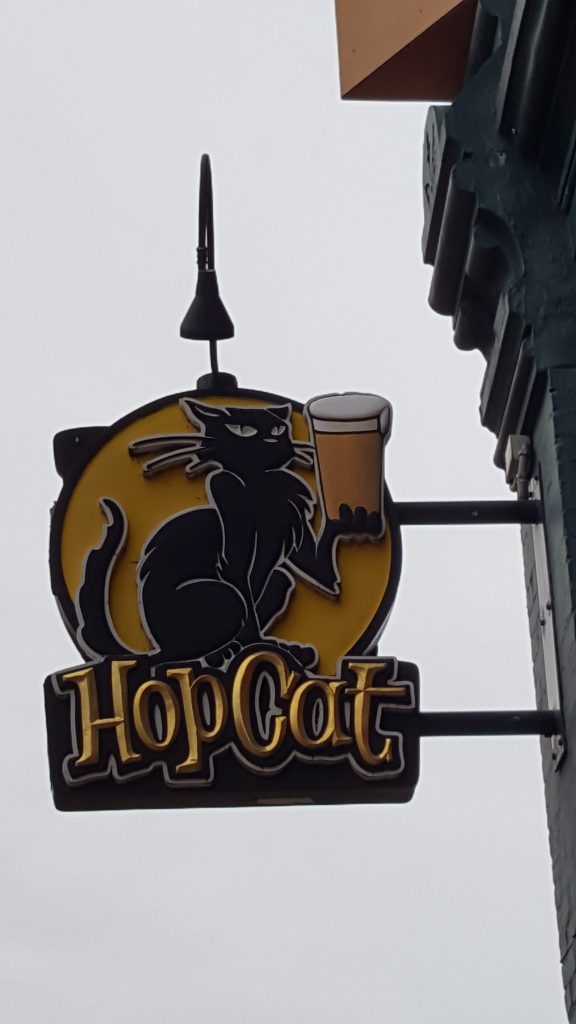 Of course we had to have the Crack Fries that they are known for and I ended up trying their Cobb Salad which was very large and very tasty! On top of this I also was able to try a few brews too. Hopcat has 14 different locations in Michigan and other States which was amazing. I did not realize that they had brought Hopcat to so many States until today, so I definitely learned a lot on my visit today! 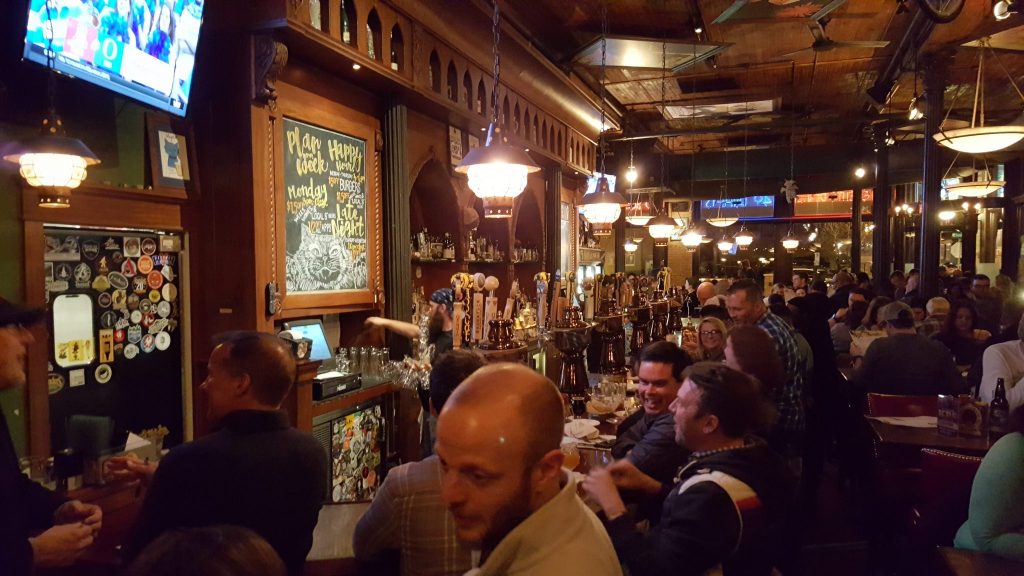 This was a great Brewcation in Grand Rapids. I just scratched the surface, but I did become a Brewsader, visiting 8 breweries on this trip. If you love beer, then visiting Grand Rapids is definitely a city that you need to have on your list of cities to visit. This Beer City has so much to offer that you will want to experience for yourself!