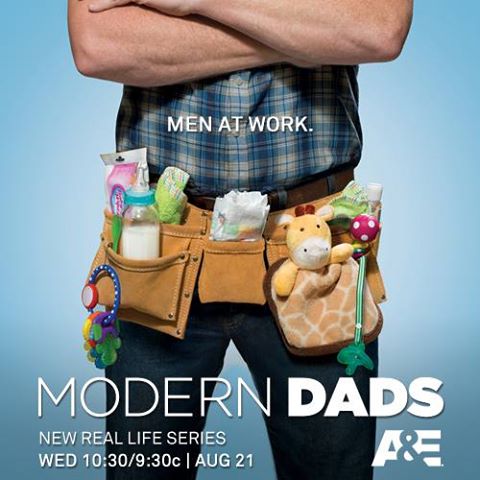 A&E’s MODERN DADS will be premiering Wednesday, August 21st at 10:30/9:30C. Modern Dads follows a unique group of stay-at-home dads living in Austin, Texas and focuses on the daily lives and activities of these great fathers and their children.

Down in Austin, Texas there’s a group of guys who are unapologetically loud and riotously funny. They’re like a fraternity, but this time around, all-nighters, babes in your bed, empty bottles and projectile vomit carry a whole new meaning: they’re on 24/7 dad-duty. Their dreams used to be fast women and fast cars, but now they only fantasize about using the bathroom without an audience.

“Modern Dads” features four stay-at-home dads who may be a little unconventional, but they get the job done. Banding together, their “guys club” is a tribe of suburban, childearing dudes who are just trying to do their thing…with a kid (or four) on their hip. A good day at the office for them is just keeping their kids—and their manhood—alive. This new series will follow their exploits as they navigate their lives; juggling the requirements and social expectations of being both a “modern man” and a “modern dad” while their significant others are off at work.

This real-life group of friends include Nathan, the newbie dad, an enthusiastic but sometimes overzealous father to his baby boy; Rick, the veteran dad, a MacGyver-type who rules the roost with a strict hands-off approach to parenting his two boys and twin girls; Sean, the cool step-dad and unfiltered comic helping his girlfriend raise two girls; and Stone, the single (and looking) dad to three kids including a witty 5-year-old girl, who he is not opposed to using as chick bait. They’ve stuck together from hanging around bars as college students to strolling around the neighborhood park as trophy husbands and dads.

How would you like to win an A&E Modern Dad Giveaway Prizepack which includes the following:

All you need to do is fill out the below form to enter. The contest will run for one week and will end on August 16, 2013.