This shop has been compensated by Collective Bias, Inc. and its advertiser. All opinions are mine alone. #SendHallmark #CollectiveBias

Happy Holidays! Make sure that you send love and joy this season by using Hallmark Greeting Cards to tell your friends and family how much you care! Click here to save $1.00 off of a two Hallmark Greeting Card purchase at Walmart, minimum $1.00 purchase required. Take advantage of the savings and #SendHallmark this holiday season! 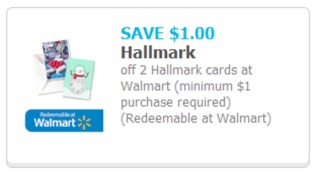 Save $1.00 off 2 Hallmark cards at Walmart (minimum $1 purchase required)

Consumer: Coupon valid at participating retailers in the U.S.A. on any purchase of two Hallmark (including Sunrise) and Connections from Hallmark greeting cards totaling $1.00 or more from participating Walmart stores. Not valid for online purchases. Limit one $1.00 savings per coupon and one coupon per customer. Coupon must be surrendered at time of purchase. May not be combined with other offers, including coupons and promotional merchandise. Excludes gift enclosures and packaged and boxed cards. Not valid on gift card purchases or past purchases. See store for any additional exclusions. No cash value. Tax not included. Offer may be cancelled or modified at any time. This offer is exclusive for you; coupon may not be redistributed. Internet distribution strictly prohibited. No photocopied, photographed, scanned mechanically or digitally reproduced or altered coupon accepted. Coupon fraud is punishable by law. DO NOT DOUBLE. 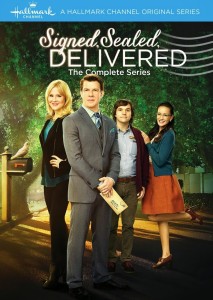 About the Series
Signed, Sealed, Delivered : The Series is a wonderful combination of romance, comedy and drama for the whole family. The ten one-hour episodes follow four postal workers, the POstables, who transform themselves into an elite team of Dead Letter detectives to track down intended recipients of undeliverable mail. Their missions take them out of the office and into an unpredictable world where redirected letters and packages can save lives, solve crimes, reunite old loves and change futures by arriving late but somehow on time.

The team includes the group’s leader, charming Oliver O’Toole (Mabius), a man of faith who upholds traditional values in his life and work; Shane McInerney (Kristin Booth), a technophile who brings 21st century sensibility to the group; free-spirited, “girl next door” Rita Haywith (Crystal Lowe) who has a photographic memory; and lovable Norman Dorman (Geoff Gustafson), a master in conventional research methods. By the end, it becomes evident that the missions of the POstables aren’t just making an impact on the lives of others; they’re being changed, too.

Initially airing on the Hallmark Channel as an original movie, the season of “ Signed, Sealed, Delivered ” boosted the Hallmark Channel’s ranking as the #5 rated cable network on Sundays from 8-9 p.m. “Signed, Sealed, Delivered” is executive produced by Martha Williamson, best known as the executive producer of “Touched by an Angel” and beloved for her signature brand of family entertainment.

My Take on the Series

My wife and I have been a big fan of Signed, Sealed, Delivered since it came out last season and we were very disappointed that it was taken off of the main Hallmark channel and moved to their premium Mysteries and Movies channel, as my carrier does not even have this, at least not yet. I was excited to be able to see that they put all of the first season into one DVD and was so glad that they did.

Signed, Sealed, Delivered is a family friendly series that I definitely would recommend sharing with the whole family. There are great messages of friendship, faith and love which for me, as a parent, I would like my daughters to experience and see. The writing is the series is solid and the characters are memorable, quirky and lovable , yes, even Oliver O’Toole too.

My family are also mystery lovers so it was nice to have a new mystery that unfolds with each episode. The series does follow something of a sequential order, so I would recommend watching them as such, the mysteries are stand alone, so you can catch up if you get out of order as well.

All-in-all this was a wonderfully made family show and this DVD really captures this and shares it with all viewers. I highly recommend Signed, Sealed, Delivered to all of you!

—————————————-
New to the Divadom or to Dad of Divas Reviews?
Please Subscribe to my RSS Feed! Subscribe in a reader
Questions? Drop me a line at [email protected]