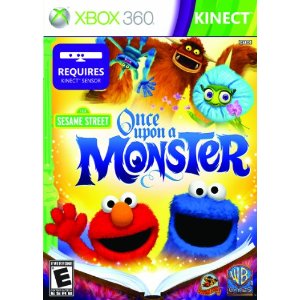 Sesame Street: Once Upon A Monster is an Adventure game for young players that combines the hallmark educational themes of the Sesame Street universe with the fun and ease of play of the Microsoft Kinect Sensor.* An Xbox 360 exclusive, Sesame Street: Once Upon A Monster is an interactive storybook like no other as children join Elmo, Cookie Monster, Grover, Oscar the Grouch and other characters as they meet new monsters and help them overcome their problems. Game features include: multiple ‘chapters’ of play, familiar Sesame Street characters as well as friendly new monsters, drop-in/out 2-player co-op support and active gameplay featuring the controller-free Kinect Sensor.

A Living Storybook Full of Lessons for Children

Sesame Street: Once Upon A Monster is an Educational Adventure game in which young children learn lessons as as they accompany some of their favorite Sesame Street characters in a truly interactive storybook experience. Gameplay revolves around an in-game book called Once Upon a Monster that is found by Cookie Monster and Elmo. As the book is opened they along with players become functioning characters in its six chapter storyline. Here they encounter a variety of friendly muppet like monsters who need help with age-apropriate problems and scenarios. Some of the subjects touched upon include: cooperation, empathy, appreciation of similarities and differences in others, the value of exercise and preschool level skills. The game also features drop-in/out co-op gameplay support allowing additional kids or parents to join in the fun and/or come to the aid of a child who needs help, a variety of in-game activities and controller-free action using the Kinect Sensor for Xbox 360.* 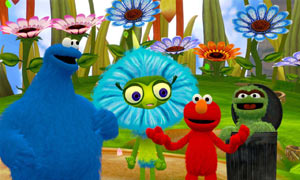 The Kinect Sensor for Xbox 360

The Kinect Sensor for Xbox 360 allows you can experience gaming like never before. Easy to use and fun for everyone, the Kinect Sensor utilizes revolutionary full-body tracking to put you in the center of the fun. This amazing technology allows the sensor to recognize your body and mirror your movements in the game, making you the controller. The sensor is compatible with every Xbox 360, features a color VGA motion camera (640 x 480 pixel resolution at 30 frames per second), a depth camera (640 x 480 pixel resolution at 30 frames per second) and an array of four microphones supporting single speaker voice recognition.

I was given the chance to play this game at Time to Play Magazine’s Holiday Showcase and then just recently at my own home and I have to say, this game is remarkable for young players. The game uses both educational and cooperative play to encourage engagement and interaction for all players. What my daughters loved was that you get to become a part of the world with Sesame Street Characters such as Elmo, Cookie Monster, Oscar and Grover in a fun story that will keep you going for a long time,

Along with so many other Kinect games, this game keeps you active and as in other Kinect games you are forced to engage with the game which is a positive thing in my book. No longer can you simply sit on the couch, instead you have to move, jump, etc., to get the characters to do what you want them to do. In this game specifically though, what was great was that you get to be active while being a part of the Sesame Street gang and you also learn some great lessons along the way through the social and emotional curriculum that the developers used in this game, but beyond this though , the game also introduces ideas about how to make new friends, to be empathetic, to creatively solve problems, face fears and appreciate differences along with a number of other great lessons also.

The graphics in this game were amazing (two thumbs up) and you will leave the game asking for more!

Overall, this was a great game that all Sesame Streetlovers (young and old) will appreciate!