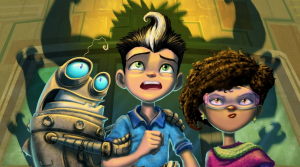 In the first book, What’s the Matter with Newton?, Newton Warp is a mystery, even to himself: He wakes up one day in the library with no idea of who he is, how he got there, or where he came from. Newton is quickly assigned to a dorm and makes a friend: Shelly Ravenholt, who creates living, breathing monsters for fun. He’s eager to find out who his family is, but this is high school after all, and he soon has other problems: Newton has to create a last-minute project for the Mad Science Fair and Shelly’s friend Theremin (a robot) is really jealous of him. And that’s not all: the other students at Franken-Sci High soon realize that Newton has a few useful, but surprising quirks. Wherever Newton came from, they start to suspect that he’s not entirely human! 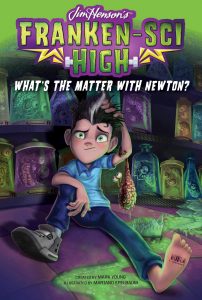 In the second book, Monsters Among Us, Newton Warp’s friends notice he’s being followed around by a strange new professor, Dr. Flubitus, but have no idea why. Newton wonders if it has something to do with the barcode on his foot. He doesn’t have much time to dwell on it, though, because soon there are reports of a giant monster loose on campus! Shelly assumes a school for mad scientists would have top-notch security against monsters, nosy tourists, and other invaders, but soon she and her friends Newton and Theremin discover a gaping loophole in the system. If a marauding monster can find its way to the school’s secret location in the Bermuda Triangle and figure out how to open a portal to the campus, anyone else could get in, too! Then Shelly finds out she might be the reason the monster is there in the first place 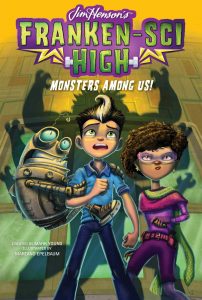 My Take on the Books

The Franken-Sci High series is truly a fun romp of science, monsters and so much more. If you love robots and portals and brains floating in jars you have good taste, and your kid probably does too!

Interested in getting these books for yourself? Enter below!