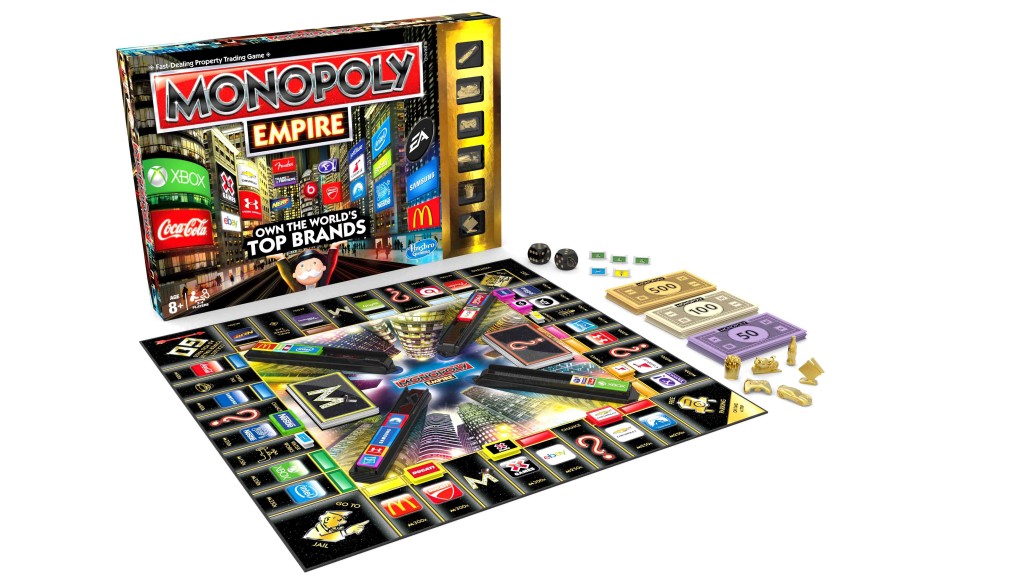 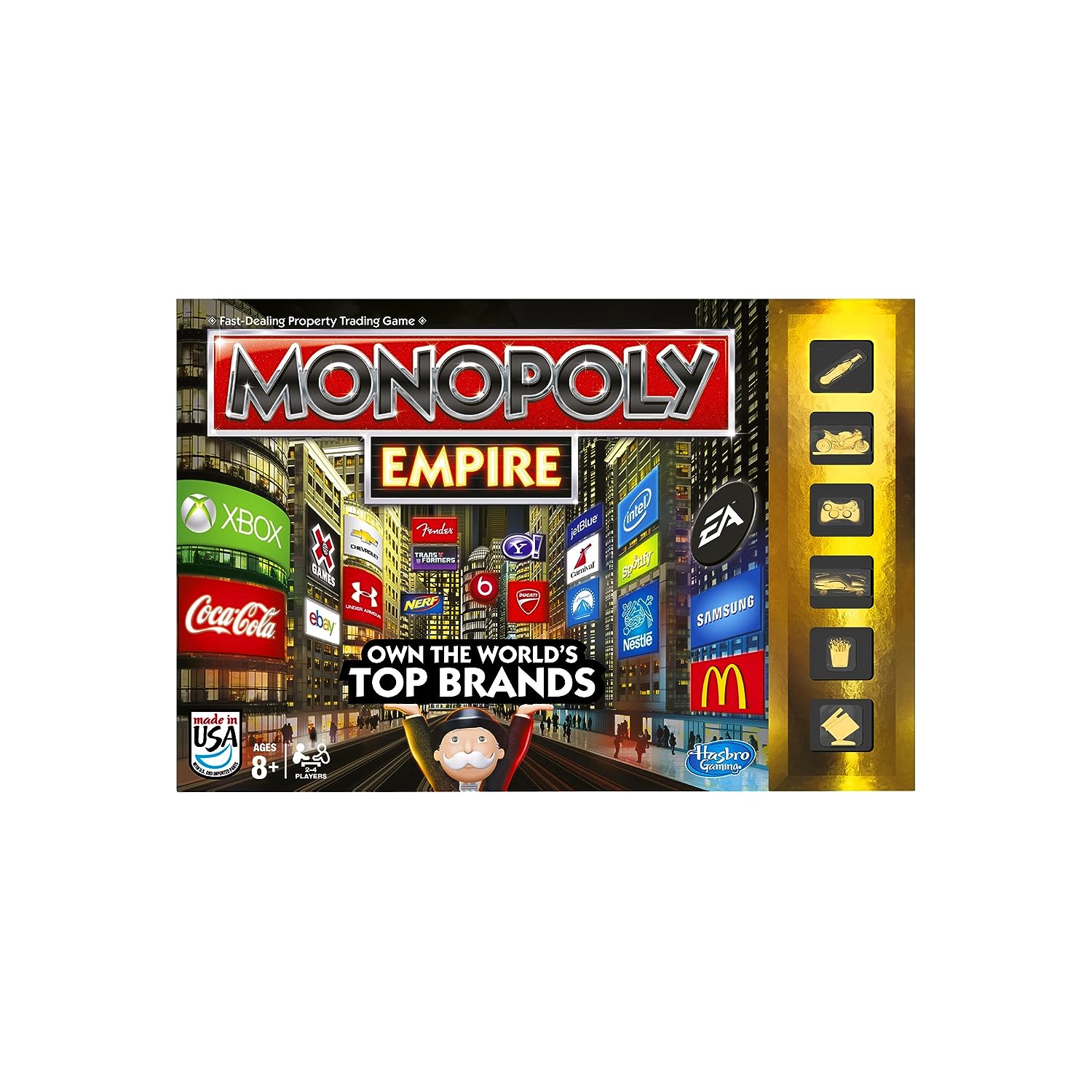 About the Game Experience everyone’s favorite property trading game in a whole new way! With the Monopoly Empire Game

, kids can now buy and sell some of the world’s favorite brands. Twenty-two top brands such as Coca-Cola, Xbox, Samsung, EA and McDonald’s line the tricked out game board, letting players live out the fantasy of owning it all! Make your way around the board buying up your favorite mega brands and adding them to your billboard tower. Collect rent from your opponents based on your billboard and be the first to complete your town to win the game! 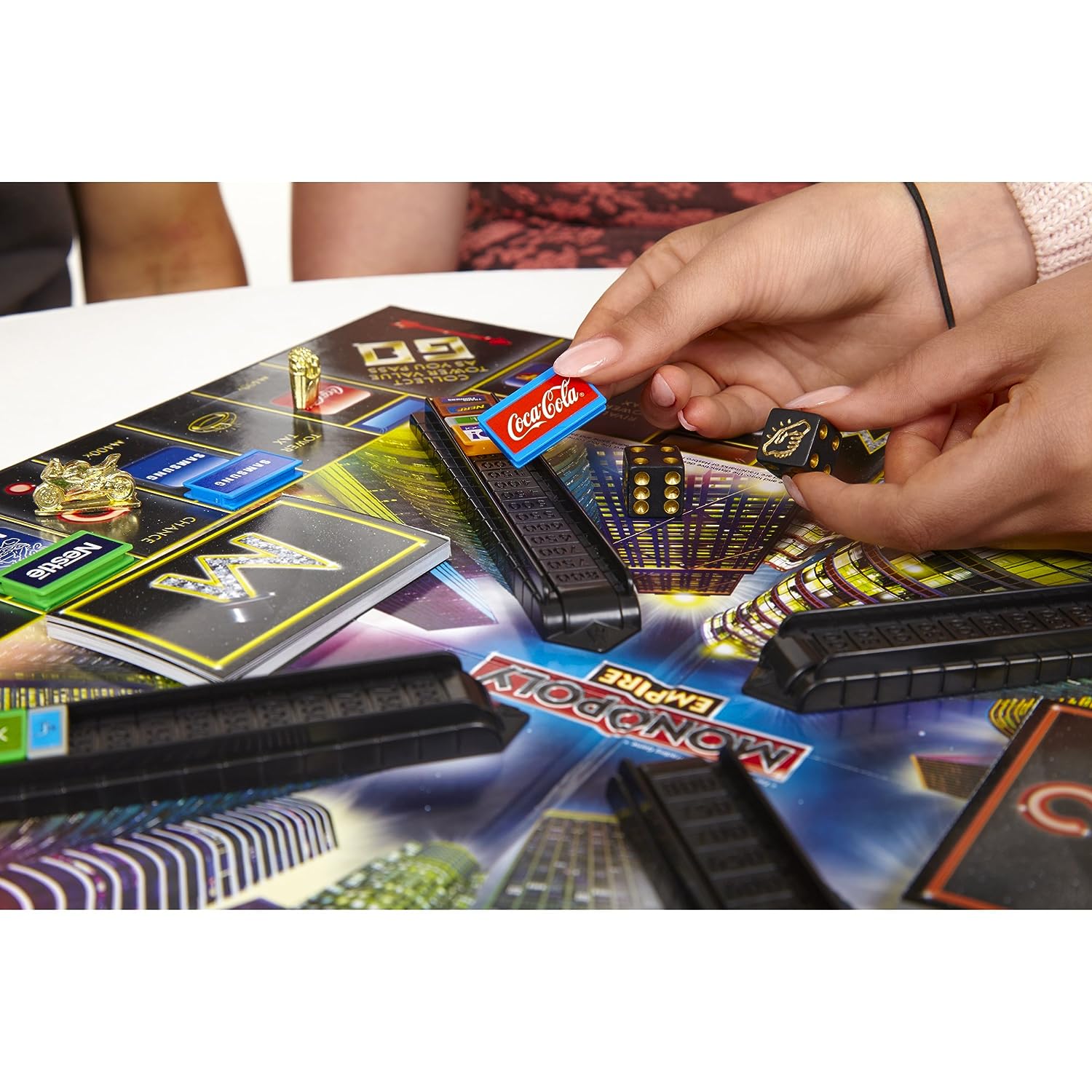 I have tried a number of different monopoly games in the past but this is different than the others and provides a much faster game play than you have in other versions. My daughters and I could finish a game of this in a little more than 30 minutes, so no more daylong monopoly extravaganzas, and instead we could get a few games in after dinner before bed if we would like or differentiate games and still get a few in on a family game night.

A few other things that I noticed that my kids liked included the fact that the properties were all ones that my kids knew. No more did that have to know about St. Charles Place, but now were collecting brands like EBAY, Coca Cola, XBox and more.

The game also allows all to play without worry of bankruptcy. Because it is a shorter game everyone can play and have fun throughout the game without this worry.

I will say that I was surprised at how much was on this board. This was a crammed board with a lot going on. There really is not much room to be able to fit much else, including the dice!

The game itself does capture the idea and essence of Monopoly yet the strategy of the original game is a bit lacking in this game and instead it is more social in nature and you simply get to have fun. Thus, even for younger players you can be successful at this even if you don’t have the ability to strategize your next few moves as you really need to be able to do from the original game.

How would you like to win this for yourself or for your family? All you need to do is fill out the below form to be entered.  The contest will run for one week and will end on September 16, 2013.

Winner must be a resident of the U.S. Winners are chosen at random, if you want all your chances counted, make sure you leave individual comments, not all of them in one! Winner has 48 hours to contact me or another name will be chosen.