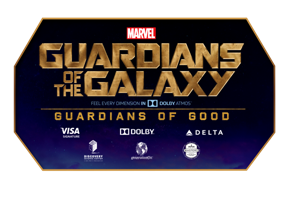 MARVEL’S “GUARDIANS OF THE GALAXY”—GUARDIANS OF GOOD invites real “Guardians of the Galaxy,” young men and women (ages 14-18) from across the United States, to share their stories of how they are bettering their communities through service, science or innovation, and gives them the opportunity to connect with a galaxy of Peer Guides—who are already doing great things—to learn from their successes. Entries will be accepted between June 11, 2014 and June 29, 2014.

Applicants for GUARDIANS OF GOOD will participate in online sessions with Peer Guides, who will include representatives from generationOn, Broadcom MASTERS®, NASA’s Jet Propulsion Laboratory and Marvel’s “Thor: The Dark World” Ultimate Mentor Leadership Council. Peer Guide sessions are scheduled to take place between June 13, 2014 and June 21, 2014. The Peer Guides will discuss their personal stories of service, science or innovation as well as learnings and advice.

Following the Peer Guide sessions, all applicants will then submit a short video explaining how they are improving the galaxy and what inspiration and guidance they received from their Peer Guides. The five best video entries will be selected as winners.

The five winners will each receive: Two round-trip tickets to Hollywood, including hotel accommodations, from July 20 through July 23, 2014, to be on the red carpet at the World Premiere of Marvel’s “Guardians of the Galaxy” on July 21, 2014; an invitation to the first-ever GUARDIANS OF GOOD INNOVATION & SERVICE SUMMIT on July 22 at The Walt Disney Studios in Burbank, where professionals and peers will share their knowledge; a backstage tour of the Disneyland Resort; and a red-carpet screening of the film at a Dolby® Atmos TM Theatre in or near the winner’s hometown.

GUARDIANS OF GOOD INNOVATION & SERVICE SUMMIT is scheduled to include presenters from NASA/JPL, speaking on the monitoring and protection of Earth through asteroid detection and Earth-observing satellites and ensuring the safety of Mars spacecraft during a comet encounter, Disney Imagineers, generationOn, Broadcom MASTERS®, Discovery Science Center, & Disney Global Community Outreach. For more information about MARVEL’S “GUARDIANS OF THE GALAXY”—GUARDIANS OF GOOD, please visit http://www.marvelguardiansofgood.com.

NO PURCHASE NECESSARY.  Void where prohibited.  Contest commences on or about 6:00 AM PST on June 11, 2014 and ends at 11:59 PM PST on June 29, 2014.  Open only to persons who are 14-18 years of age and legal residents of the 50 United States or the District of Columbia and not employees of Walt Disney Studios Motion Pictures, MARVEL, generationON or any of their parent, related or affiliated companies nor members of their households or immediate families.  Limit one (1) entry per student. Winners must be able to travel on July 20, 2014.  See Official Rules at www.marvelguardiansofgood.com for full eligibility and entry requirements, prize description, conditions and limitations. The official contest sponsor is Walt Disney Studios Motion Pictures.

James Gunn is the director of the film with Kevin Feige, p.g.a. producing, and Louis D’Esposito, Alan Fine, Victoria Alonso, Jeremy Latcham,  Nik Korda and Stan Lee serving as executive producers. The screenplay is written by James Gunn and Nicole Perlman. Marvel’s “Guardians of the Galaxy” releases in U.S. theaters on August 1, 2014

Marvel Entertainment, LLC, a wholly owned subsidiary of The Walt Disney Company, is one of the world’s most prominent character-based entertainment companies, built on a proven library of over 8,000 characters featured in a variety of media over seventy years.  Marvel utilizes its character franchises in entertainment, licensing and publishing. For more information visit: marvel.com. © MARVEL