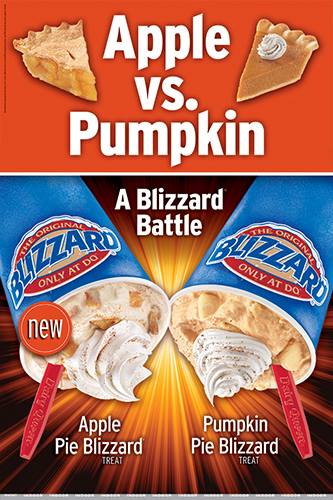 Dairy Queen is featuring two September Blizzard of the Month treats with the return of the classic Pumpkin Pie Blizzard and the all-new Apple Pie Blizzard.
In true fan-loving form, DQ is asking fans across America to decide which flavor reins supreme. And we’re making it personal. We’ve teamed up with the mayors of two towns known for their apples and pumpkins, Wenatchee, Wash., known for apples and Caro, Mich., known for pumpkins, for this Blizzard Battle.
The mayors are placing a friendly wager on which flavor will come out on top. The town with the most votes will become the Official Pumpkin Pie Blizzard Treat or Apple Pie Blizzard Treat Capital of the World. The losing mayor buys the winning Blizzard treat for both communities. Watch the mayors’ wager and town residents cheering for their side here.

My Take & Vote on the Flavors

I had the opportunity to try out the flavors and while both tasted great, I have to say that I am placing my vote with Pumpkin Pie! I was not the only vote in my group and we were mixed, as I and my oldest daughter voted for Pumpkin Pie Blizzard, but my wife and youngest chose to vote for the Apple Pie Blizzard. We have been big fans of the DQ Blizzard for some time and I have to say that I love new flavors as they are introduced and I hope that both of these may stay for a while longer too!

I encourage all of you to go out and try these for yourself and throw in your own vote to this Blizzard Battle!