Our 836th Dad in the Limelight is Joe Pellerito. I want to thank Joe Pellerito for being a part of this series. It has been great getting connected with him and now sharing Joe Pellerito with all of you. 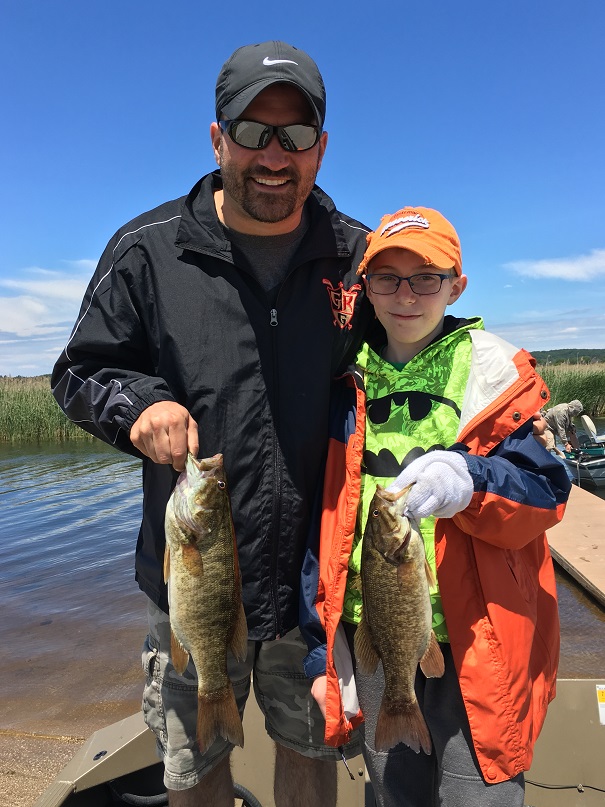 I did not grow up fishing, but it has been fun to tackle this new hobby together. Did you catch the Dad joke?

My name is Joe Pellerito and I’m a Husband of 18 years to Judy and Father of 12 years to Danny. I am an educator who works with schools throughout the country as a Leadership Development Strategist with a company called The Flippen Group.  I’m also lucky enough to occasionally volunteer as a guest teacher at Muskegon Correctional Facility.  I get to coach school leaders on improving staff and student performance. I facilitate many trainings, primarily through a process called Capturing Kids’ Hearts.  The process helps educators get kids truly connected to the teacher, but also to each other as classmates. When everyone is safe, they can handle conflict better and go farther as a team.  As the saying goes, “When you have a kid’s heart, you can get to their head.”  This is true for adults as well!  If we want our classrooms to be highly-functioning groups, we need a staff who live as a highly-functioning team. 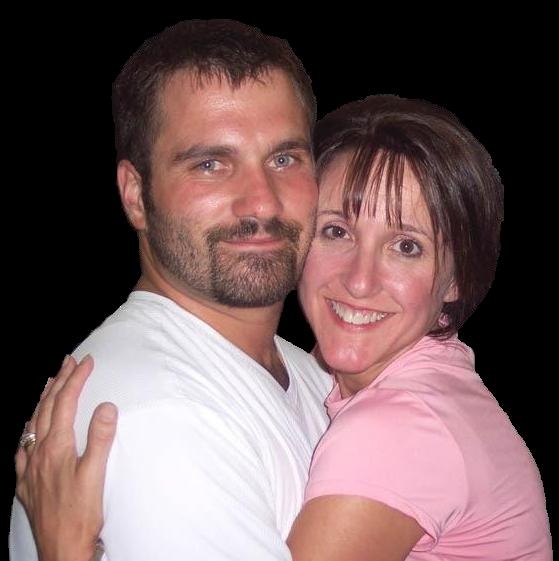 My Wife Judy and I planned to have kids, we were excited to be parents! After years of trying, a miscarriage, and many fertility treatments, it just never happened.  We are both teachers, we thought, “Maybe we have our kids already.”  We had come to terms with not being able to have kids and thought we should embrace it.  Funny how life works…

Tara, a senior vocal music student in Judy’s choir, knocked on her door one morning to inform Judy that she may be missing some rehearsals – she was pregnant.  The father was Brian, another former student who had already graduated.  Tara told Judy they were planning to put the baby up for adoption.

We took Brian and Tara out to Wolfgang’s restaurant in Grand Rapids on a Saturday morning for some breakfast.  They happily accepted us that morning as their son’s future parents.  We were there for the last ultrasound and on Friday, October 14th, 2005, my wife and I were each notified at our schools that Danny was on his way.  We were there at the hospital as fast as we could get there.  We took him home the next day.  What a gift they give us!

There’s much more to the story.  The short of it: Tara became a choir director like my wife, Brian became a professional chef.  They stayed together.  They were married.  You can guess who the ring-bearer was at their wedding.  They now have two more sons.  My son has two birth brothers!

We didn’t realize then that we were also being adopted.  We have a big family by choice.  We’ve gained grandparents.  We get together for birthdays, holidays, and even go on vacation together. 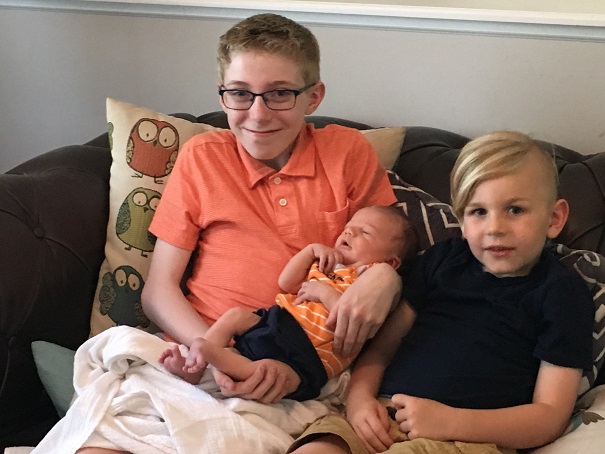 Danny with his two birth brothers, Lincoln and Miles

Being a Dad can be a challenge… but it’s so much fun! I have an easy time hanging out with my son and finding activities to do together, it doesn’t feel “hard”.  My current challenge is related to spirituality and living authentically.  For years, I’ve heard the importance of a father being the spiritual leader of the household – but what happens when Dad doesn’t come from a spiritual family?  What happens as faith changes?  In many ways, I’m more spiritual than I have ever been, but it looks different now. The pressure I feel is partially self-imposed, but I also recognize my family looks to me to make the call.  What’s it mean to be spiritual and grounded?  Should we go back to church?  Where?  What happens if I don’t agree?  How can I encourage my son and wife in their own spiritual journeys?

My advice to Dads: Learn, Love, and Laugh.  What adventures can you experience with your kids?  Be curious, ask questions of your kids, even when you know the answer. Plan experiences: Danny and I ended up doing Tang Soo Do together (South Korean martial arts) for about four years and earned our black belts.  Be spontaneous and fully present.  For Love, find your kids’ love language (excellent book). Learn to love what your kids love, they will appreciate you taking an interest.  If we don’t listen to them when they’re five, will they listen to us when they’re fifteen?  Laugh easily.  You will mess up and so will they.  A hard life can feel easy when we approach it with humor. I’m really good at Dad jokes, just ask my family. The truth is, most people reading this have hit the jackpot – what will you do with your winnings? 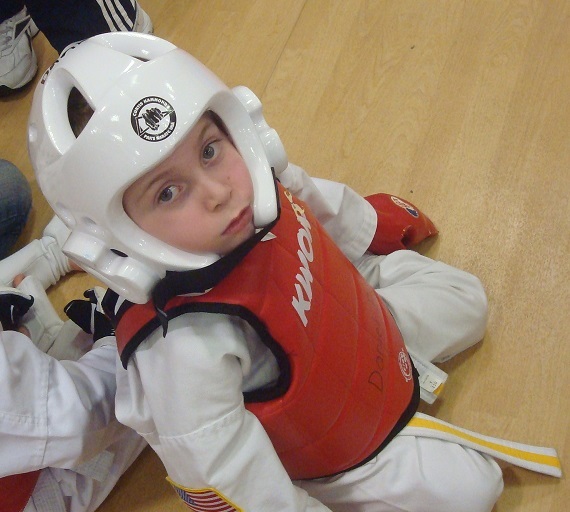 Danny before sparring round. He’s a blackbelt now!

For balance: I’m very intentional, especially now that I travel for work a lot.  I exercise three times a week and am more thoughtful about what I eat and drink.  I lost 25 pounds a year ago and have maintained it.  I’m running in a balanced way: My goal is to run in official races the equivalent of a marathon by my son’s next birthday, I’m about halfway there now.  I balance my time when home.  If I have work I have to do from home, I like to do it in the kitchen where the action is.  If I have work I don’t have to do (yet), I capitalize on time with the family.  This means I stay up later to get everything done.  I allow my wife and son to hold me accountable because I know it’s easy for me to mess up in this area.  When my wife says “you’re home, but you’re not here”, that’s a big red flag for me.  I’m getting better with balancing iContact with eye contact.  I don’t always react appropriately when I mess up (defensive), but then own up to it and move forward.  I try for a “do better”, not just a “do over”.

6) What have you learned from the fathers who you have interacted with?

From other fathers: From my Dad, I learned the importance of levity.  He uses words to put others up and sees the positive in all situations.  Over a decade ago, I read an important book by John Eldredge called “Wild at Heart”, it came at a crucial time.  One core idea that stood out: “Don’t ask yourself what the world needs.  Ask yourself, ‘What makes me come alive?’ Because what the world – a wife, a child – needs is men who have come alive.”  I’ve learned that my wife can’t be in charge of my report card. It’s not her job to make me happy.  When I truly embraced that, I became less self-centered and more grateful.  When I’m joyful, my family is more likely to be as well.  I’ve learned when I can talk with other Dads, I become a better Dad. 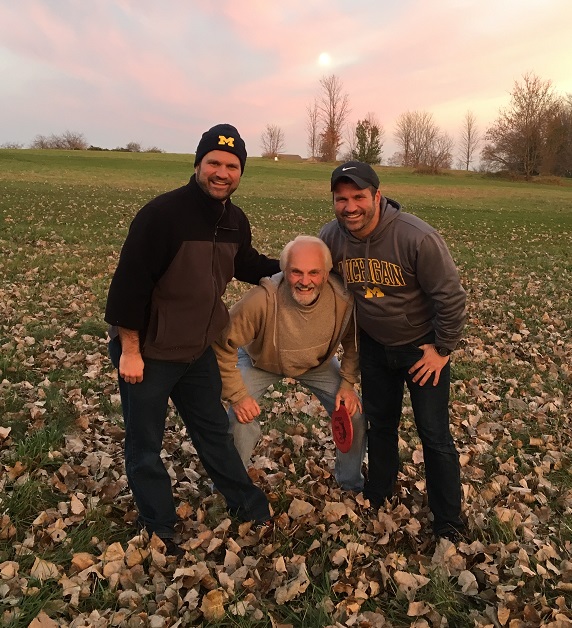 Twin brother Mark, my Dad Tony, and I frisbee golfin’.

A memorable moment: My son had just joined karate.  He was a “yellow-white” belt.  Our Master insisted we go ahead and try a tournament.  My son did excellent in his forms, but I was worried about his sparring.  He was paired with a kid who was two years older who was a green belt because there were no other kids my son’s age or size.  I wanted to pull him out, but set my worries aside.  Then, what I was worried might happen… is exactly what happened.  The kid pummeled my son!  Danny tried to kick, but his legs wouldn’t reach.  He tried to defend, but kept getting hit.  He stayed in… Score 5-0, 12-0, 18-0, 21-0, 28-0, finally after 30 points, the referee called it.  The ref raised the other kid’s hand.  Danny started to walk towards me after the big fight.  What was I going to say?  “Nice try?”  “It’s ok?”  “Well, that other kid was a lot older…?”  Before I could say anything, he looked up and said “Dad, I did it!”  My response?  “YES, YOU SURE DID!”  Danny didn’t even know the score, all he knew was that he had “passed through the fire.”  I learned not to rescue my kid, he learned an important lesson that day!

If you have any questions for Joe Pellerito, please leave a comment here and I will make sure that he gets them so that he may be able to respond!