Our 357th Dad in the Limelight is Mark Staufer. I want to thank Mark for being a part of this series. It has been great getting connected with him and now sharing him with all of you. 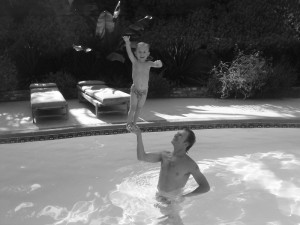 My name is Mark Staufer, I’m a New Zealander who’s been living in Los Angeles for the past 10 years by way of Europe and Australia. Screenwriting brought me to Hollywood, and my biopic of legendary comedian Bill Hicks is to be directed by Russell Crowe. I’ve also written a multidimensional entertainment franchise called “The Numinous Place” and most recently I’ve partnered with another dad — comedian Bryan Erwin — to launch a podcast for fathers called “Dadsaster.” The response to Dadsaster has taken us by surprise, actually. We hit number one on iTunes Kids & Family “New & Noteworthy” after a few weeks, and feedback has been tremendous. We love giving voice to dads around the world to tell their stories and discuss dad-centric issues, and we have a huge amount of fun doing it. Weirdly, the moms and mums seem to like listening too, and we enjoy getting the mommy bloggers on the show.
2) Tell me about your family

What I would say is that EVERYTHING takes a backseat to my family. I’m an only child who never had a father growing up, and I’m determined to be the best dad I can possibly be for my kids. Sarah and I got married six months after meeting 16 years ago. She’s a pretty dynamic woman, a remarkable mother and I admire and love her to bits. Because she’s been oftentimes the breadwinner and starting up her own cleantech video business, Future360.tv, I’ve been the stay-at-home dad to seven-year-old Milo and nearing-three Anouk. On the most part, I love it. Even though I’d never changed a diaper in my life and never had anything to do with kids, I wouldn’t trade the experience for anything. 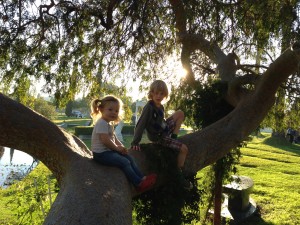 I think we all rebel initially, right? We live in denial a bit — we think things will carry on the way they were and we’ll be able to just maneuver the kids around our lifestyle. I’m not the most patient kinda guy and I remember it was a shock to discover that babies are so reliant on us for the first few months — they don’t change or feed themselves and just sort of lie there all wobbly and defenseless. It’s quite monotonous and you really don’t get much back from the blob except crap and mucous and wails. And, of course, you think they’re going to die any second because they’re so teeny-tiny and you might drop them or you could overfeed them and they’ll explode… All these worries are a constant and if you’re home alone, it can be isolating and challenging. But it all changes around 6-months. Hallelujah! Baby gets a personality and starts interacting. They still don’t change themselves though, which is annoying.
4) What advice would you give to other fathers?

One word: surrender. The moment you realize that the new normal bears no relation to anything you imagined, and that there’s nothing you can do to change it — that’s when you need to just go with the flow. Everything will be OK, just don’t fight it. When I found that it was absolutely impossible for me to get any writing done, I simply got up at 4am and did what I had to do before things got kid-complicated. If you’re pissed-off you’re going to miss a deadline because you have to play My Little Ponies or change another diaper or make another snack, life can become unbearably stressful. Just surrender and live in the moment. Your kids can actually tell if you’re present, but absent. And it’s only a matter of time until they start doing the same stuff to you. One other thing: practice Stealth Parenting rather than Helicopter Parenting. Let ‘em play, let ‘em fall, let ‘em learn and negotiate stuff on their own without constantly interfering. When you’re a Stealth Parent, you watch invisibly and swoop in if you’re needed.

An ‘outside life’? What the hell is that? The only escape is sleep. As mentioned, I get up early and try to get some of the work out of the way. Don’t make the mistake of working and doing stuff while they nap. You’ll get exhausted. Always nap when the kid naps if you’re primary caregiver because you’ll soon discover tiredness comes with the parenting territory. Sleep is more valuable than gold.

We all have the fear to begin with. Any dad who tells you they were on song from the get-go probably isn’t the primary caregiver. Every child is different and the chances are your kid is gonna be way more different than everyone else’s. I other words, there is no normal except in books. What I would say is that the fathers I know have all stepped-up and are capable, and beneath their bluster treat the job of being a dad as a sacred responsibility. Moms probably hate to admit it, but dads are just as good at this parenting caper as they are. In some ways, we’re better. It’s just that we’re a little unorthodox in our aims and approach. For instance, I notice that moms usually have their kid  facing towards them in those Baby Bjorns. I think it’s much more important that baby 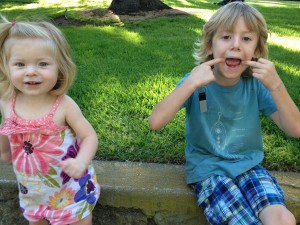 looks out at the world because I see my primary gig as a father is preparing my kids for life — teaching them about what the world is going to be like, and how to cope with it. No-one really did that for me growing-up, and I think I would’ve benefited from some guidance. By the same token you need to instill in your kids a sense of how the world views them — they need to have the ability to see themselves as others do. Every day when I pick my boy up from school I ask him who he’s been kind to that day… Kindness is an under-appreciated purpose in life.

Personally, I’m absolutely terrified about the teen years. I’m basing this, naturally, on my own appalling behavior when I was that age. I really put my mother through a terrible time, and I think payback is arriving in spades. I worry about drugs, I worry about sex (especially when it comes to my daughter), I’m worried about tattoos and piercings and fast cars and animal attacks and crime. I’m terrified that one of my kids will come home and announce they’re a Scientologist. I’m determined to be a father more than a friend — someone who is always there, but whose influence extends beyond childhood so they make the right decisions when I’m no longer around. Or, at least, I hope to swoop down stealthily and rescue them from the tattoo parlor. 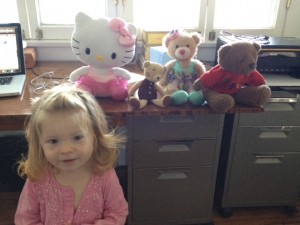 I love it when they begin making decisions for themselves — even over small things — and I’m flushed with pride when they make right decisions. At our parent-teacher meeting a while back, Milo’s 1st grade teacher told us our son usually finishes his work first and then chooses to help another kid who’s not quite up to speed. She also mentioned numerous other kindnesses he does like comforting others who are upset and sharing his stuff with those who have less. It actually choked me up to hear all this, because he evidently also does it without showboating, and believe me, my son is no saint. He’s just a normal little boy who’s beginning to understand the meaning of compassion.
If you have any questions for Mark, please leave a comment here and I will make sure that he gets them so that he may be able to respond!