Our 312th Dad in the Limelight is David Stanley. I want to thank David for being a part of this series. It has been great getting connected with him and now sharing him with all of you. 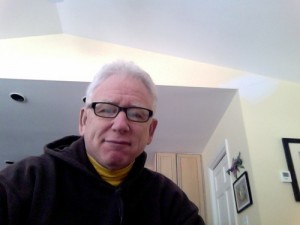 At 54, I’ve had a great life. As I often tell my wife, “I lead a charmed life.” I have almost always managed to make a living doing things I enjoy. I have the things I need AND want. Plus, I’ve learned the knack of not being the last one to leave a party; professional or personal. Frankly, I’m not sure how “limelighted” I am at the moment.

In the past, thanks to a bit of athletic skill and a huge amount of hard work, I was a mid-level itinerant semi-professional bike racer. This brought me in contact with several truly elite athletes – Olympic Team members, World Champions; a close brush with greatness without the greatness itself. I was able to use my racing contacts to write fairly regularly, over two years’ time, for the now-defunct magazine Bicycle Guide. I aged out of competitive cycling. The legs really do go first.

Nearing forty, with a looming divorce and a 4 year old son, I realized it was time to leave one career party. I had always been a science guy, and as I was an ex-college soccer player, I decided a high school coaching and teaching career seemed the next logical step.

High school is an entirely different sort of limelight. Teachers are scrutinized. You contact hundreds of lives, and you never know which moment is a crucial moment for that particular kid. It is not a matter of being on your best behavior. It is a matter of always being present with each kid. I wrote about it here. Fourteen things good teachers know.

I was also the boys’ soccer coach. No one cares more passionately about sports than high school athletes and their parents. We had excellent teams. We won. The kids stayed out of trouble. Still, the athletic director fielded regular calls demanding my firing from parents who sat in the stands with clipboards and stopwatches. They were timing their sons’ playing time and counting the number of times their child touched the ball. I had great parents but it still had its moments.

When my son turned 14 and entered high school as the number three man on his school’s tennis team, I was glad to quit as coach. I was not going to watch other parents’ children play sports at the expense of my own.

I continued teaching. I loved teaching. Every day, I was lucky to demonstrate to a wide range of kids that I could wear pink shirts, squat 365 and be a smart person who didn’t care what clique you were in as long as you gave it 100% in the classroom.

Six years later, August 2012, I quit teaching. My brother was seriously ill. I wanted be around as much as possible. As Isaac Asimov said, “If I had six minutes to live, I wouldn’t brood. I’d type faster.” On December 14, 2012, I lost my younger brother to oral cancer. I have things to say and it is time to type faster. Here’s the first piece I did after my brother’s cancer returned. Cancer is a senseless M*&^%^F*&^er

2) Tell me about your family.

I am married to a woman who manages my idiosyncrasies like no one else. I am a performer at heart. It was Cath who convinced me that being a high school teacher would be like having a stage gig every day. I sing, play guitar and piano, do theater. There’s a lot of ego there and she keeps me in line. She has been a major part of my son’s life (Aaron was born to wife number one-I got pretty lucky with her, too) since Aaron was 4.

Aaron is 20, playing tennis, and sorting things out at Albion College in mid-Michigan. He’s afraid to make a major choice as it might be the wrong one. We tell him regularly that few people make a choice at 20 and stick it out for the next 50 years but he’s not quite ready to believe us. 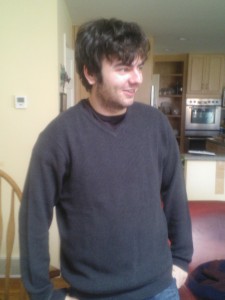 As nearly every dad in this series has said, it is patience. Patience to let the kid explore, patience to sit by and watch your child succeed (or not) on his/her own, patience as your kid learns to master his/her world.

One? Love. Love your child – toddler, grammar school tween, adolescent and adult, with all your heart. You’re sending your personal emissary to the future out into the world. Help your child become the sort of person that you would want to have as an adult friend. If you do this Dad bit properly, you will have 50 years of adult friendship together.

Two? Love your child’s mother. Do you want your son to learn how to treat a woman? Do you want your daughter to see what sort of man she should marry? You better be that guy. They are watching. They are learning. You can’t fake this.

Two and a half? As you treat your parents as they age, that is how your children will treat you.

Three? Remember these words. Adolescence is much harder on the kid than it is on the parent. Trust me.

Four? Allow your children to make their own mistakes. Letting a kid “fail” is a seriously difficult task but 100% essential. If you want a resilient child, one who can handle the ups and downs of life, one who “can meet with triumph and disaster and treat those two imposters just the same” (Kipling), you need to resist that urge to charge in and fix things. Since we’re men, we love to fix things. How did we learn to fix things? By trying to fix them. Give your child that same privilege.

5) Seeing that you (or your position) are in the limelight, how have you come to balance parenthood and outside life?

It is difficult. I don’t know how I could have trained on the bike 3-6 hours a day, travel for weeks at a time for races, knowing that my son was growing up without his Dad. I was 33 when Aaron was born, so I didn’t have to make that choice.

When I was coaching, I was able to have Aaron come to practices and games. That part was easy. He played soccer until he got really good at tennis around 14.  As a grade-schooler, he helped out the managers and played a lot of soccer on the sidelines during practice. I think that was good for him. He saw me working, he saw how dedicated I was, and he saw how dedicated my players were to effort and excellence.

As a result of my college soccer career at Michigan State, Aaron and I were fortunate to share a great evening. In 2006, MSU celebrated their 50th season of Men’s varsity soccer. All the old boys were invited back for a huge weekend. At the banquet, Aaron and I were seated with two gentlemen from the middle1960s, both of whom played at MSU on their way to earning Olympic and World Cup berths with the Jamaican National Team.  My fourteen year old son, laughing and joking with Olympic Team members at dinner. Priceless.

I started out as the caretaker Dad right from the start. I was not quite a SAHD but I was self-employed. My first wife Andi went back to work early on. It was 1992 and I was more a curiosity than anything else. I didn’t have a lot of interaction with other dads. The Internet was in its infancy for civilians. I was on Prodigy and CompuServe at the time. In fact, some older readers may remember me as Dave inFlushing (MI) or DnF from CompuServe. There weren’t any bloggers yet. I was active on the cycling bulletin board and that’s where most of my interaction re: parenting and Dad-hood took place.
7) What else would you share regarding your experiences as a father thus far? What have been the most memorable experiences that you have had thus far as a parent?

Your kids will grow up fine. Even if they won’t eat their broccoli, aren’t potty trained until 4, don’t give up their bottle until kindergarten and want to wear the same shirt every day for a month-as long as you love them and keep them safe, pretty much everything will be okay. My dad, a retired physician, once said “I’ve never yet seen a kid go off to college still sucking on a bottle.”

The corollary to this? How you handle the tough spots and crises determines how your child handles the tough spots and crises. Do you want a level headed kid who can make good choices in a tough spot? Dad, you better cultivate a cool head yourself. The most memorable experiences I’ve had are when my son did well under pressure and he did it on his own. Then I knew that my Dad and I did our jobs. Why mention my Dad? From whom did I learn if not him?

If you have any questions for David, please leave a comment here and I will make sure that he gets them so that he may be able to respond!