Dads in the Limelight

Our 352nd Dad in the Limelight is Alex Maurizi. I want to thank Alex for being a part of the Dads in the Limelight series. It has been great getting connected with him and now sharing him with all of you. 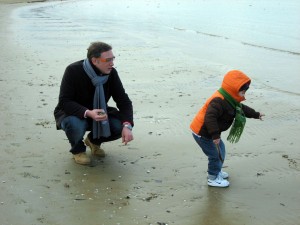 Being born and raised in Italy from an Italian father and a bona fide New Yorker mother who, more than forty years ago, fell for the undeniable allure of the old continent, I think I may safely affirm that my upbringing was rather peculiar to say the least. You may say I grew up eating spaghetti and reading Kerouac, who incidentally was a friend of my mother’s father. I still live in Italy and love every minute of it. Except for the politics of course. In an Italian karate gym I met my beautiful wife who every now and then still likes to fly-kick me in the head for the sake of good ol’ times. I currently work at the University of my hometown, Perugia (I’m in charge of the Learning Content Management Systems at the Linguistic Center – No, ladies, back off, I’m already taken!). Since my childhood  I’ve always been attracted by the philosophical systems of Eastern religions, including Tibetan Buddhism, Hinduism and, above all, Zen. I started writing as a hobby only a few years ago, at first with short articles that were published in local newspapers. Later on, after my son was born in 2007, I felt the urge to write something more profound about this incredible and life-changing experience in a book, whose title may roughly be translated into English as “Happy papa – The world’s smallest Zen master”. In 2011 a publisher accepted it and the book was released to the public in March, 2012. Right from the beginning I was overwhelmed by the public’s response. Hundreds of people showed up for the presentation and the room was so crowded I seriously started considering spraying them with a hose and trying to stage dive. During the following months I was interviewed in live radio panel discussions as well as being featured in national television programs, newspapers and magazines. So I did the only sensible thing I could do: I translated my book into English (re-wrote it almost from scratch would be a better expression for what I did) and sent it out to a few selected literary agents in the U.S. A couple of months later the Charlotte Gusay Literary Agency in CA decided I was worth their time, we signed an agreement and here we are, looking for a publisher to make it rain.

As I already told you I met my wife in a karate gym. That happened almost twenty-two years ago (As you can see I’m not a consumerist at all when it comes to wives). We where both very, very young. Our relationship has grown more and more meaningful and  intense over the years, until it finally led to the birth of my son, who I like to call my little “Zen Master”, because he has taught me more about the meaning of life since his birth than I had been able to learn on my own in almost 35 years. He isn’t a seraphic Master with a white beard and a kind smile. Quite the contrary. But he knows how to get to the point. My book talks about this Master/disciple relation in a funny and humorous way, while trying to combine the weightless profundity of being a father with the profound weightlessness of Zen teachings.

I think that would be having to renounce to my “precious” personal spaces. I’ve always liked to meditate, to read and to do things my way in general. Now he’s the general and things get done his way. At first this was almost scary, not having my man-spaces and my man-cave anymore in which to take refuge when I felt stressed out and needed some peace and quiet to cope. But that’s made me an overall better human being in the end. I’ve stretched my limits to previously unknown boundaries and it makes me feel good about myself.

Even if you haven’t slept for more than 6 or 7 total hours during the last three days, never ever chug more than five energy drinks at any given time. You will be able to read minds and deep clean your apartment but your heart will either stop completely or your pulse will be so fast that you won’t be able to feel it. Jokes apart, my advice is to be yourself,  try to be as tolerant as you can (if before the birth of your beloved offspring you had a cupful of tolerance now go for a vat) and, above all, always respect your children. They have their own personalities and feelings, thoughts and opinions. Start teaching them the true meaning of respect right from the beginning. That’s how I was raised, so on second thought don’t do any of the above. Instead force your opinions onto the little bastards. 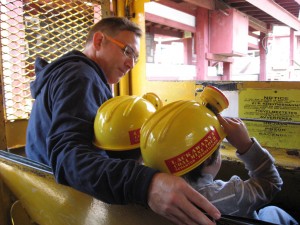 Balancing my main job, my activity as a writer and a blogger (http://www.alexandermaurizi.com) and my role as a father (whose wife has a job that often requires her to travel abroad. Just one word: chickenpox. I was alone. “The Walking Dead” doesn’t look so scary now, huh fellow father?) is one of the most difficult things in my life. I cope trying to carefully schedule the time I can meaningfully dedicate to each activity (I’m also slightly OCD so I may overdo from time to time. My idea of fighting the system is putting the volume knob on an odd number). Also I try to get my priorities straight: first beer, second football and…oh, sorry for a brief but oh-so-dangerous moment I was telling you the truth. What I meant was obviously I try to be a good father, a good husband, a good friend and a good writer.

That sometimes you have to pretend that you are not seeing. That sometimes you don’t need to be there, or even better you need to not be there or be there but make him feel like you’re not or something like that. I got lost after the third logic fallacy. 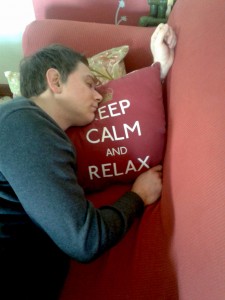 Love. Motivation. Commitment. Not having a life anymore and not regretting it (well, not always at least, but I’m a complainer).

I can recall many both positive and negative experiences, and surely enough any father has his good measure of them. As for the most memorable one it would probably be when my son had to go to the bathroom at JFK airport in NYC. While I was taking him (my wife was waiting for the luggage to come out) I heard a strange gurgling noise, turned around and saw him literally head-to-toes covered in a brown foamy froth. My first thought was that somebody had thrown a Starbucks cup of coffee at him, but what really had happened  was that he had simply barfed all over his clothes, face, arms and legs (Take this, Linda Blair!) and then continued walking behind me as if nothing had happened. Here I am, with a vomit-covered baby that has to go number two in one of the largest and most crowded airports in the world. Hooray. But I managed to survive somehow, even though I can’t recall a thing because probably my self-preserving instinct wiped it out from my conscious mind two minutes after it happened.
If you have any questions for Alex, please leave a comment here and I will make sure that he gets them so that he may be able to respond!