Our 90th Dad in the Limelight is TV Anchor Jason Colthorp . He is one of the lead anchors of WDIV, a NBC Affiliate in Detroit, Michigan. I want to thank Jason for being a part of this series. It has been great connected with him and now sharing him with all of you! 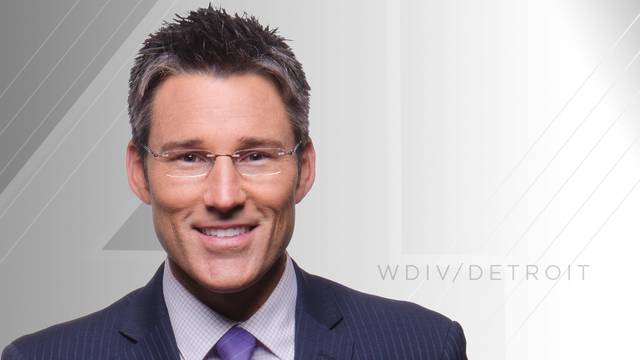 I am 43 and am the lead anchor for the 5:30 news on WDIV-Local 4, the NBC affiliate in Detroit. Prior to this I worked at WILX TV-10 in Lansing for 10 years. I began in sports in my first two years at WILX and then transitioned to being a news anchor at the WILX station for 8 years, two on the morning show, 3 on the WILX-produced Fox 47 newscasts, and then 3 years on the News 10 at 11 broadcast.  I am a Lansing native, who grew up in Florida and Michigan.
2) Tell me about your family

I am a single father of two.  I have two daughters age 10 and 7.  I am crazy about them and try to enjoy them every way I know how whether it’s playing games, watching them play sports or participate in school, I just have a lot of fun with them.
3) What has been the largest challenge you have had in being a father?

Obviously, my biggest challenge as a father was putting my daughters through a divorce.  They have handled it as well as can be expected because their mother and I have split amicably with only their best interest on our minds.  No matter what anyone ever says like ‘it’s better than letting the kids see you fight all the time’ or ‘they’ll be better off seeing you two happier’, it’s all crap.  Kids are better off with two parents, period.  Two parents who are in love with each other is a bonus, but as long as they’re there and getting the job done as parents, it’s the best thing for any child.  Divorce to a child is taking their nice cozy happy world and shattering it.  They don’t know it yet, but their lives have changed forever.  As a child of divorced parents I know it gets better.  But there are still a lot of struggles dealing with blame, custody, new boyfriend/girlfriend, and a million other things you don’t think of.  It’s a challenge that will likely never end. 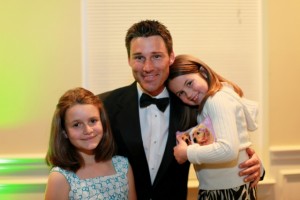 4) What advice would you give to other fathers?
Avoid putting your kids through that.  I try to make sure my kids know I love them.  I don’t just say it often, but I give hugs and kisses and have lots of snuggles.  I’m crazy about spending time with them.  I believe you have discipline them though too.  With today’s world of drugs, technology, school shootings, pregnancy, etc., you have to have your kids ready to face the world younger than ever.  My philosophy is give them a thousand times more love than discipline and you can punish to your heart’s content.

Sometimes being on TV is tough to balance with being a dad, but it helps much more than it hurts.  I may miss part of a game or two, but I can also include the girls in fun activities I have to host as part of my job.  It’s also important to me that when someone recognizes me when I’m with the girls I am courteous back.  I am always polite, but it’s a great opportunity to set a good example.  After a while, that sort of thing is second nature and not a distraction to our family time.  It even allows for unique opportunities like talking to my daughter’s class about my job.

Every day is a learning experience because everyday they’re getting older and learning.  So, I adjust and try not to let my feelings get hurt when I realize they’re approaching the ‘parents aren’t cool’ stage.  I just do my best and with their mother’s help, try and raise them to be the best I can and my job as a public figure often makes it easier.
8) What have been the most memorable experiences that you have had thus far as a parent?
My most rewarding experience though, was coaching my daughter’s soccer team.  It’s fun to teach her in other ways and watch her progress along with her teammates in so many ways.

If you have any questions for Jason,  please leave a comment here and I will make sure that he gets them so that he may be able to respond!