Our 153rd Dad in the Limelight is Arjun Basu. I want to thank Arjun for being a part of this series. It has been great connected with him and now sharing him with all of you. 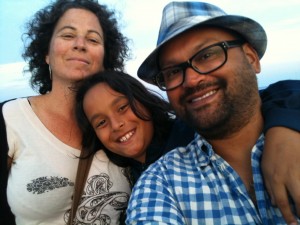 1) Tell me about yourself.

I’m a writer and editor. Meaning writing is who I am and editing pays the bills. My first book, Squishy, was published in 2008 and my first novel is currently making the rounds with publishers. In the meantime, I’ve created this odd thing on Twitter (@arjunbasu), writing 140 character short stories I call Twisters, and they have garnered a lot of attention in the media, have won me some awards, and as a result I now have over 100,000 followers. But most importantly, I’m a husband and a father. And I guess the father part is why I’m here.
2) Tell me about your family.

My wife makes wonderful ceramic objects and should be launching something next year. We’ve been together more than 15 years and married about 11 years. Our son, Milo, is 11. He’s smart and sensitive and is starting to get mouthy but then again, his parents are kind of mouthy so he comes by it honestly. We live in Montreal. 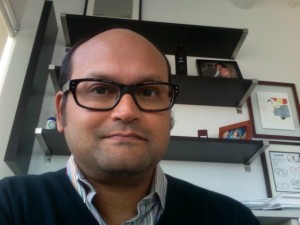 I think a lot of fathers would say the biggest challenge is time. How to achieve work/life balance. With me, that challenge is more acute since I also write. I used to be a heavy sleeper before Milo was born. I’m not much of one now. If there’s one change I could pinpoint, something obvious, it would have to be that.
4) What advice would you give to other fathers?

To fathers-to-be (and mothers as well): sleep. Get it in now. And then figure out how you’re going to spend your waking hours. Because you’re going to get stretched thin. I feel stretched and I only have one kid. But also this: we really are adaptable. Things will work out. At least they will if you’re not an asshole. Oh yes, there’s that too: ditch your ego. Or at least, accept the shift that will occur within your own identity with grace and humility. See your new identity for what it is: awesome. Because it is. 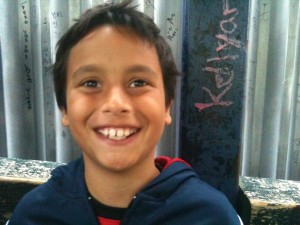 5) Seeing that you are in the limelight, how have you come to balance parenthood and outside life?

You’re not always going to get the balance part right. That’s not a big deal. But you have to be accountable. To your family. And to your kids for sure. Communicate with them, also. My kid knows what I do, understands what I do and gets that people make demands on my time. I travel a lot for my work and even for my writing (though a lot less often). I’ve been the editor in chief for a wide circulation magazine and he got very used to everyone seeing my photo in a magazine every month. He also knows it’s not normal to be recognized by random strangers in odd places (like, say, an elevator in Boston or on the beach in the Mayan Riveria). And now I have over 100,000 Twitter followers. He’s been around this odd kind of pseudo-fame of mine for so long he’s just accepted it as being a part of who I am.

We’re all time crunched. In the end, every father, no matter how different, feels as if he doesn’t spend enough time with his kids, whether or not this is true. When I travel, you end up talking to a lot of fathers and a lot of them suffer from some level of guilt. I think it’s inescapable, unfortunately. 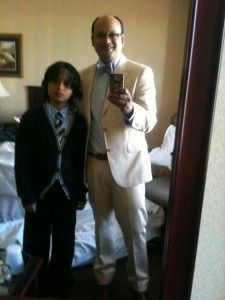 It’s hard work. Being a father is hard work and 24/7 but it’s also the best job in the world.
8) What have been the most memorable experiences that you have had thus far as a parent?

When my wife was pregnant, we really thought we were going to have a girl. We were sure of it. At the same time, we had asked not to be told what we were going to have. But we were both sure. Who knows why? In retrospect, we had nothing to go on. And, of course, when our baby came into the world, she was a he. I remember my first words, it’s a boy, said in a kind of astonishment, my voice hoarse from being tired and in awe of what was happening. And then, as my wife was being administered to post both, I took the swaddled Milo (I had already announced his name) and we went to a side room for about 15 minutes and we bonded. We stared into each other’s eyes and I spoke to him. And he listened to me. And those 10 or 15 minutes were a kind of magic I’ll never forget.

If you have any questions for Arjun, please leave a comment here and I will make sure that he gets them so that he may be able to respond!