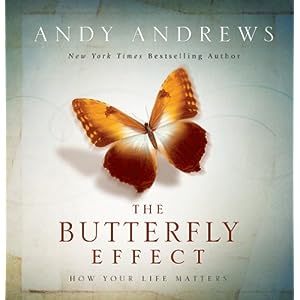 Joshua Lawrence Chamberlain, a Colonel in the US army , led Union soldiers in the battle at Gettysburg , during the Civil War. The effect of the decisions by this courageous man would affect the world. His decision to charge against the South when the outcome was bleak changed the history of our US history.

If he had lost the battle we would have had a spilt nation. If that had occurred our nation would not have been strong enough to stand up to the adversity in WW I and Hitler in WW II. His bravery and courage created the butterfly effect which rippled into our world to bring about the United States of America and the principles we want to continue to live by today.
Joshua was a catalyst.

So what about you and me? You may not think what you do matters , but it does . Every action you make affects your family, friends, your work community, and even your community . Your actions can change the future of those around you.

However did you know that this man and his mother were kidnapped by robbers when he was a baby.His neighbors negotiated his release and he was almost dead,but they took him in and adopted him as their own. Look at the butterfly affect that these two people who fought for the life of this baby created.

So do you matter? YOU DO have a special purpose in this world. Your actions have value.
“Your life and what you do with it today . . . .matters forever , ” Andy Stanley

Example: an application to each person’s life who reads this

Think about your actions. Did you help someone in trouble at some point? Did you listen to someone who you later found out may have been so depressed they did not want to live but you gave them hope?

On the other hand: Did you lie to someone and that lie caused other events that are still being played out today? Did you take something that did not belong to you and you see that person grieve the loss today still? Were you so proud and your ego so important to you that you did not care what you did to get what you wanted and the ripples of that decision are stretching over years and years?

Yes both good and bad can happen with The Butterfly Effect. How are your actions and words from the past or present affecting your present and even the future? Think about that.

If this book sounds like something you would like in your own library you can find it on Amazon!