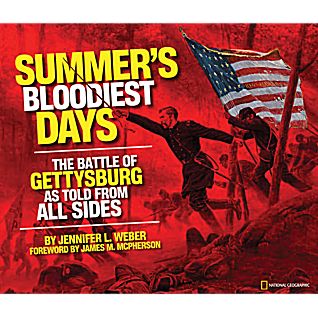 About the Book
Written to coincide with the 150th anniversary of the start of the Civil War, this book powerfully illustrates a true turning point in American history. Gettysburg expert Jennifer Weber tells the story of the momentous battle through the voices of those who were there, a unique approach that makes this title stand out from all others.

Gripping eyewitness accounts, archival photographs, and dramatic artwork combine with the latest research to portray the Battle of Gettysburg from all sides—Yankees and Rebels, officers and foot soldiers, men and women, townspeople and outside observers. Through their eyes, today’s students get a real sense of how a chance meeting on a dusty road exploded into three days of intense combat. Maps specially created by National Geographic cartographers help us follow all the action of the vicious and complex battle, during which more than 50,000 people were killed, wounded, or taken prisoner. Names such as Little Round Top, the Peach Orchard, and Pickett’s Charge take on new meaning as young readers learn about the incredible sacrifices made—often by people still in their teens.

My Take on the Book
In June of 1863, General Robert E. Lee marched into Gettysburg to attack the Union army. He believed he would defeat them. However on July 1, Lee’s dream died. The Battle of Gettysburg became the bloodiest battle ever to take place on the North American continent.

Jennifer Weber uses eyewitness accounts and excellent artwork in this informational book. You will be riveted to the story as you hear about the sacrifices made by these young American soldiers. Be aware that in this battle 11,000 men died and 30,000 were injured.

The story begins with facts about Lincoln’s Gettysburg Address. The author goes into detail about the two armies and the difficulties they encountered. She then takes us into the battle that waged on July 1,2,and 3, 1863. Details about the number of men in regiments and armies and maps of the approaches the armies made are described and drawn. She paints a very visualized account of the battle as it unfolded.

Jennifer gives the reader information about the guns, uniforms, equipment, ammunition, and introduces the nurses who were there under the direction of Clara Barton. She often supplies photographs such as the surgeon’s knife used in amputations and the kinds of guns the men carried.

There is so much information in this book. As you complete your reading of the major text, don’t forget to read the time line of the Civil War at the end of the book.

I know you will enjoy this book and learn so much about the history of our nation as it was divided in two. Share this with a young person in your life.

If this book sounds like something you would like for your own library you can find it on Amazon!